The city that gave name to the first kingdom

It was the first capital of a Christian kingdom, the starting point of the Reconquest. Oviedo is an important cultural and gastronomic center nowadays.

Plan your stay in Oviedo

Our visit to the capital of Asturias can perfectly last for a whole weekend. Things to do in Oviedo normally include sightseeing the city’s amazing treasures: both the rich cultural heritage (such as the Fine Arts Museum or the Cathedral) and the sought-after gastronomy Oviedo offers. In case you had some spare time, we would recommend you visiting the surrounding areas such as Avilés, Gijón or Candás.

What to see in Oviedo

In spite of the numerous destructions in the urban center of the city between 1934 and 1036, Oviedo still preserves some important buildings such as the Provincial Council (1910), the Herrero Bank, Soledad Menéndez Conde House (1904), and Aureliano San Román House because of its ceramic façade by Daniel Zuloaga.

The old Traslacerca takes us to the old city. After enjoying a visit to the Tribute to Jovellanos, we proceed to enter to the church quarter, which is full of temples such as San Pelayo Royal Monastery (it holds inside important medieval archives), Santa María La Real de la Corte (16th century: keeping some Baroque altarpieces and sculptures), whose cloisters is the headquarter of the Archeological Museum of Asturias (prehistorical, Roman, and pre-romanesque arts). We also highlight the Episcopal Palace(16th century), which houses the Church Museum that keeps an extraordinary collection of medieval ivory.

Surrounding the Gothic cathedral we find the Cámara Santa (Holy Chamber): a medieval chapel that holds inside the relics of the Cathedral and the treasures of the Monarchy of Asturias: the Angels Cross (808), the Victory Cross (908), the Box of the Ágatas (910), the Holy Arch and the famous Holy Shroud. The temple is richly ornamented: the Mayor Altarpiece (1531) and the image of the Christ of Velarde. Besides, the cathedral also houses the second most important Royal Mausoleum, so-called Sanctuary of the Virgin of the Battles. Do not miss the Baroque Santa Eulalia of Mérida Chapel, patron saint of the city. In the outside, facing the cathedral you find the Rua House (15th century), and the surrounding Consistorial Houses, the nobleman’s residence of the Marquis of Camposagrado, and the building of the University of Oviedo (16th century). 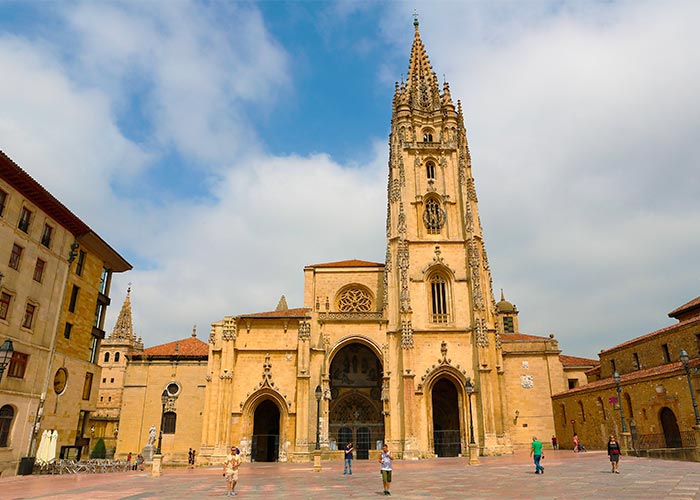 Some other great sights to visit in Oviedo are the Fish of Trascorrales Plaza (19th century), the Fontán Market, the Fine Arts Museum of Asturias (housed by Velarde Palace) and Oviedo-Portal House (which holds an important art collection). In the surrounding areas, we would recommend you to visit Naranco Mountain (where you can enjoy an excellent panoramic view and a monumental statue of the Sacred Heart of Jesus). 3 kilometers away from the center of the city, you can visit Santa María de Naranco Palace and San Miguel de Liño Church, both built in 848. In the Pre-romanesque Interpretation Center of Asturias, located also in the surroundings of the previous area, we are explained about some other monuments declared Heritage Sites such as Santullano Church and the Foncalada.