The place is one of the main border connections between Spain and France. Its historical heritage, preserved despite the successive battles that damaged the city, is surprising. As well as being a regular departure point on the Northern Way to Santiago, it is an excellent base for excursions to the surrounding beaches and mountains. Don’t miss out on history and the best things to see in Irún.

Plan your visit to Irun

Apart from the pleasant walks and buildings to see in Irún, its proximity to San Sebastián makes a double getaway a very plausible alternative. There is also no shortage of excursions in the surrounding area. For example, to Hondarribia beach or to Pasajes de San Juan and its bay. The Peñas de Aya Park and the town of Vera de Bidasoa in Navarre are also worth mentioning.

What you see in Irun is very much linked to its history, so it is worth reviewing it. Thus, the toponym probably means “place of water”. Such a name would be related to the fact that it is located on a hill on the banks of the Bidasoa River. It was the most travelled ford towards France.

There are port remains that allow the historical Oiasso (Easo) to be located in what is now Irún. The Roman port was known to be located on the Basque coast and up until now it was linked to San Sebastian. Its numerous remains are on display at the Oiasso Museum.

Irun appears in 1203 in the document that gives Hondarribia the status of a town. It does so as a “university” linked to the jurisdiction of the neighbouring mayor. During centuries this situation caused numerous lawsuits between both towns. In this way, in 1660 it was granted the category of town and in 1766 it became fully independent.

In 1512 Ferdinand had built the Castle of Gaztelu, but his grandson Charles I destroyed it in 1539, denying the city the right to walling. This decision sought to concentrate defenses as well as prevent Irun from becoming an enemy stronghold of the French occupation. 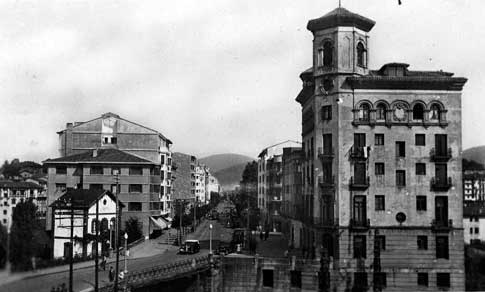 On June 30, 1522 was the first battle of San Marcial, in which a small Castilian contingent commanded by the Duke of Alburquerque and supported by the popular militia completely defeated the Franco-Navarre army, led by Enrique II Albert. This victory is remembered every year with a show on the day of San Marcial.

Later, during the French invasion of 1638, the city was badly damaged. 248 buildings were burned down, as well as all the forges, mills and economically useful establishments. Almost two centuries later, on August 31st 1813, the second battle of San Marcial took place. The Spanish army defeated General Soult’s French troops, who were trying to help the French garrison at San Sebastián.

Prosperity returned to the place during the 19th century with the inauguration of the Madrid-Paris railway line. Irún was the main Spanish freight station and its passage to France the most important in the country. The city woke up economically and welcomed a strong industry.

In 1874, the town was besieged by the Carlists during the third battle of San Marcial. At the beginning of the 20th century, Alfonso XIII granted it the title of city. On the other hand, during the Civil War of 1936 it was burned down by retreating Republican militiamen. Today it continues to live as a border landmark, also associated with the Camino del Norte. In fact, it is one of its most common starting points.

What to see in Irun

Irun suffered by the continuing armed conflicts in which has been involved, especially during the nineteenth and twentieth centuries but still retains a rich cultural heritage worth visiting. Our city tour can be started with the Paseo de Colón, which continues along Avenida de Colón and Avenida de Navarra, constituting the main linchpin of the city center. Walking through this we will see various parks and gardens, such as Luis Mariano, next to the Tourist Office, as well as some of the most prominent city business.

Taking the street Eskoleta, our first stop can be the Oiasso Museum, where you can trace the Roman past of Irun and its surroundings. In the same way you get to the Plaza del Juncal, one of the most interesting places in the historic center, are a stretch of wall and the Church of Our Lady of Juncal, built between the sixteenth and seventeenth centuries on a previous temple. Its construction was controversial, as the town of Hondarribia and the Viceroy of Navarre opposed the project because of its size and location, arguing that it could serve the enemies for shelter. The Historic-Artistic Monument of 1973, is known for its Gothic and baroque facade style. Its structure is a rectangular hall with three naves and and apse of flat front. In its interior you will find a Cavaillé-Coll organ with over 130 years of history and in the high altar, the figure of the Virgin head, a work of the eleventh century which is the oldest Romanesque Guipúzcoa size. Another curious fact is that in the rear are hot springs and public baths of Roman origin.

Very close to the square is the Casa de Beraun, a building that caught fire in the sixteenth century, although rebuilt in 1910.

Eliza street leads to the Plaza de San Juan, where the City Hall (1763), baroque style, is the main civil building in the city stands. It stands out for its portico of five arches, its facade of stone and its coat of arms. In the Chapter Room you can enjoy the extraordinary painting of Ignacio Zuloaga “Women of Sepúlveda”. The column opposite the town hall of San Juan Harri was built as a symbol of the independence of the city with respect to Hondarribia, and declared an Artistic Historical Monumentin 1964. 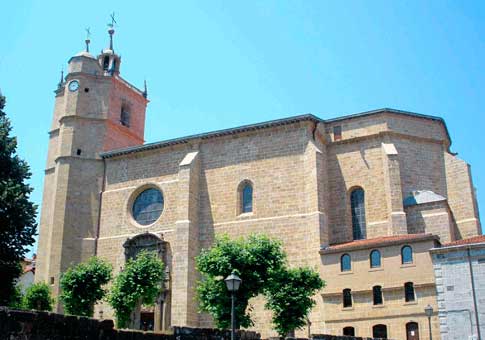 Going down the street or Larretxipi, San Martzial passes in front of the Hospital Sancho de Urdanibia, (also called the Immaculate Conception), 1646, and by a curious Baroque fountain covered with barrel vault. This path will lead us to Ama Xantalen (Ermita de Santa Elena) of century. XIV, located on the bank of river Estebenea. The current building is rectangular with a hipped roof and masonry walls. It was a place of worship in ancient times, as evidenced by excavations in the 70s, which have uncovered a necropolis from Roman times with over one hundred cremation urns and the remains of a former Roman temple century I. The chapel was later reconverted as a museum, becoming second seat of the Roman Museum Oiasso.

In the natural environment, we recommend visiting the Plaiaundi Ecological Park, twenty hectares of marshland along the Bay of Txingudi; the Natural Park of Peñas de Aia, a spectacular mountain and Pheasant Island, witnessed many historical events.

Basque Country, Gipuzkoa
It may interest you...