Colomares Castle is a monument built for the glory and tribute of the figure of Christopher Columbus. Located in Benalmádena, in the province of Málaga and in the heart of Costa del Sol, in the Autonomous Community of Andalusia, it offers a walk through the heroic deed of his journey to the new world. A path with all kinds of symbols that help the visitor  understand the magnitude of the feat that culminated at the end of the 15th century. Moreover, the whole monument is in itself a strange anachronism, full of styles and strange beauty. 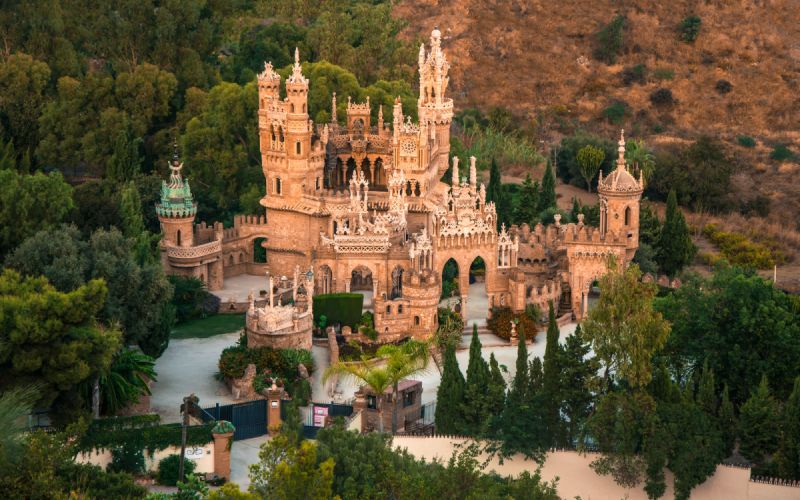 The purpose of Castillo de Colomares

This monument is tied to a particular name: Dr. Esteban Martín y Martín. In 1987 he decided to build, with the help of two builders, the castle of Colomares. They spent seven years working tirelessly just until the doctor ran out of money. The aim was to pay tribute to the navigator Christopher Columbus and his journey to the Indies that began in 1492 and ended with the discovery of a new world that was unknown until then. The history of that journey, as well as of everything that took place in the Crown of Castile in the 15th century, is reflected in the style, technique and construction materials as well as in the important symbolic significance of some of its elements. 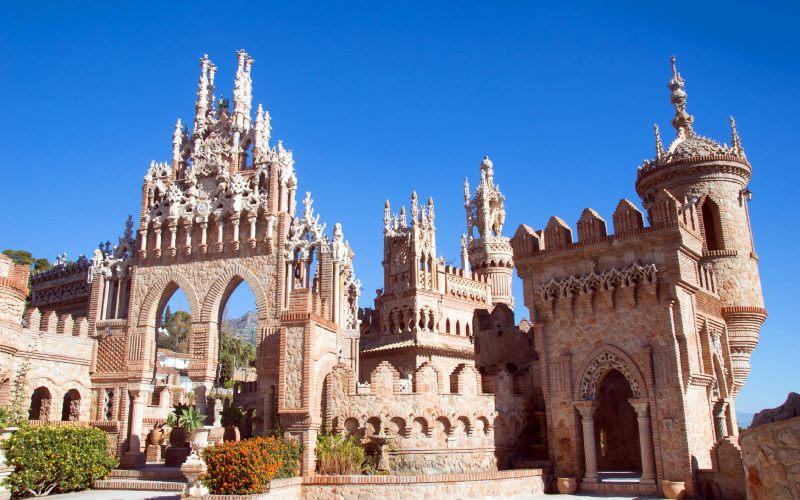 It presents a mixture of different architectural styles. These include neo-Byzantine, neo-Romanesque, neo-Gothic and neo-Mudejar. Thus, the three cultures that were found in Spain in the Middle Ages, Christianity, Judaism and Islam, are represented. The materials used are brick, concrete, natural stone and wood.

Christopher Columbus presented his travel plan to the Catholic Monarchs, who gave their approval and are represented on the monument with their coats of arms in bronze. The navigator surrounded himself with experts; among them Martín Alonso Pinzón, who in this case has been represented as the head of a bronze horse. The trip began on August 3, 1492 with 96 crew members and they arrived at an islet that was baptized with San Salvador 33 days later. There is an oratory in the castle with the image of El Salvador along with a small sea bell. The three ships used in the journey are also represented; starting with La Niña under the arch of La Rábida, which was the monastery where Columbus was accommodated. La Pinta is located on the main façade and the isolated Santa María, symbolizing that it sank on Christmas Day in Santo Domingo. 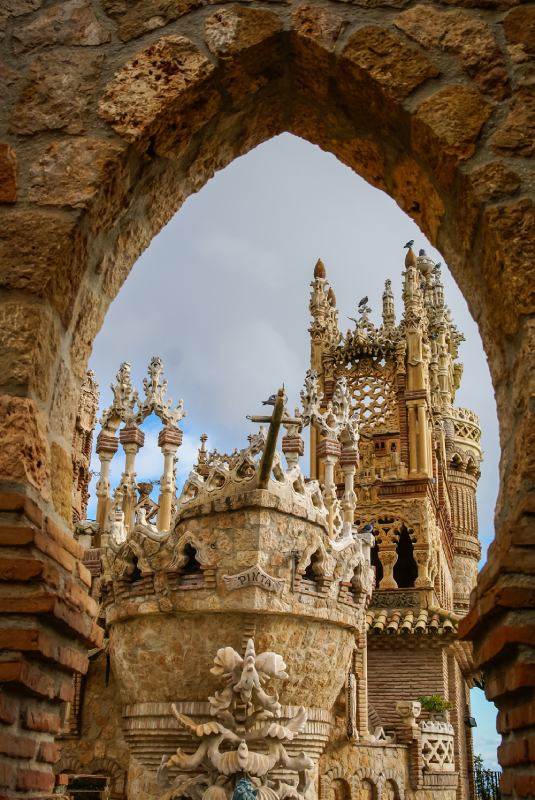 A monument with many references

The visit to the castle overwhelms the visitor to a great extent. As already mentioned, it describes as if it were an open book the adventure of Columbus and his travels. A total of 16 points tell the story. All the construction was carried out following the techniques of the Middle Ages; and it was built by hand by Doctor Esteban himself with the help of a couple of workers. Something that adds merit to the eclectic set. 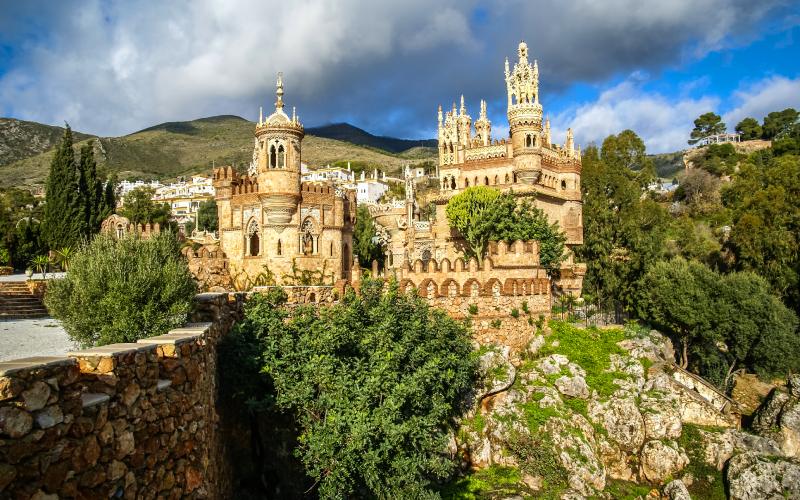 The monument defends the possible Mallorcan origin of Christopher Columbus. The floor plan of the castle is 1,500 square metres; therefore it is the largest monument erected in his honour. Furthermore, inside it is the smallest chapel in the world, registered in the Guinness Book of Records. It only has 1.96 square metres dedicated to Saint Elizabeth of Hungary. In spite of its size it includes a spiral staircase, religious images, an altar and many candles. It has even hosted masses, but most people have to follow them from the outside. By express request of Dr. Esteban, it also houses an empty mausoleum waiting for the remains of the navigator to finally rest in it. As a symbol of Columbus’ initial idea to reach the coasts of Asia, there is also a Chinese pagoda inside it.

The building is an open book that aims to tell the story and therefore; although it may seem chaotic at first sight, it makes sense if visited in the right way. To do this, it is important to stop at each of the marked points where the development of the expedition is told. 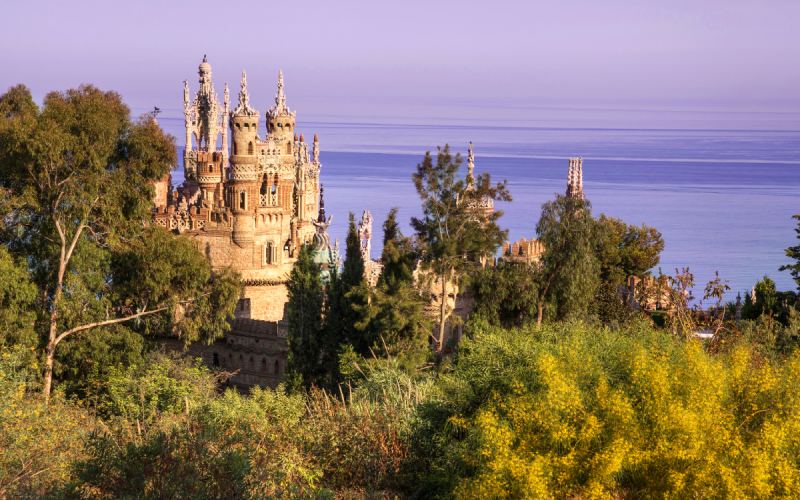 This monument is located in a very busy environment. This is Benalmádena, in the province of Málaga. To begin with, its location in an elevated place allows you to enjoy a magnificent view of Costa del Sol. It is therefore a perfect destination to visit with children, also because of all that its surroundings have to offer. Torremolinos is another of those towns so characteristic of this stretch of coast. It has from the typical areas of bars where you can taste the magnificent gastronomy of the area to endless beaches. More similar destinations would be Casares, the birthplace of Blas Infante, Mijas, Estepona with its wonderful murals or Fuengirola, a tourist destination with an extensive cultural heritage. The A-7 gives access to all of them. 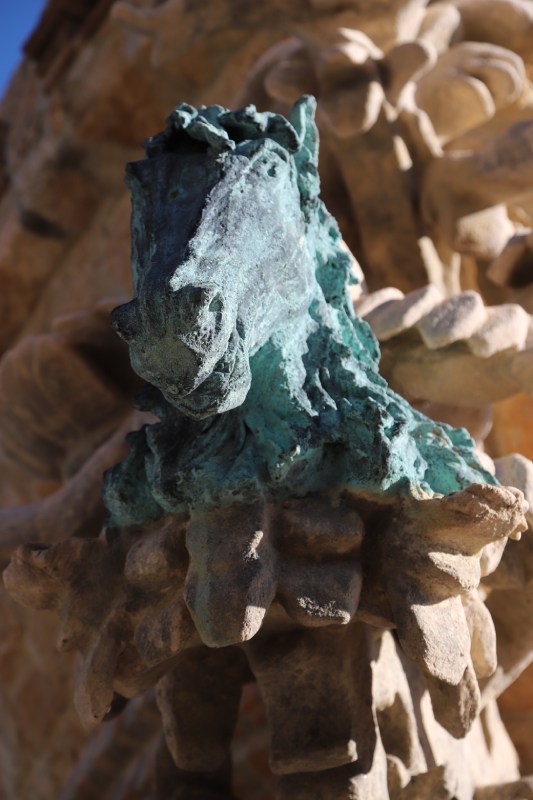 As for natural landmarks, the Nerja Caves stands out. It mixes geological formations with archaeological remains. The Torcal de Antequera, declared a World Heritage Site by UNESCO thanks to the whimsical shapes of its limestone rocks, is also worth a visit. Different but equally attractive is the Caminito del Rey, a great work of engineering from which it is possible to enjoy incredible panoramic views.

The rest of the province of Málaga, between the sea and the mountains, combines tradition with modernity. Also the most touristic areas with the charm of small corners, with little villages with whitewashed streets like Frigiliana. Thus, a trip to see the castle of Colomares can be completed from its beaches to the Sierra de las Nieves. Such an environment is ideal for hiking.

Andalusia, castles, churches, Málaga
It may interest you...