Birthplace of the golden period of Valencian Literature

Gandía is well known by its beaches. However, this is not all, since Gandía underwent a golden period of literature during the 14th and 15th centuries.

Plan your stay in Gandía

Things to do in Gandía normally involve sunbathing on Gandía’s beaches. However, you can also visit the famous Duc or Ducal Palace (owned by the Borjas centuries ago), the City Hall, some churches and some museums. If you had more time, we would recommend you visiting some other localities nearby such as Xátiva, Ontinyent, Marjal de Pego Oliva natural park or Denia.

We start out visit in the famous Ducal Palace or San Duc Palace (Gothic in style, remodeled in the 16th century and again in 1890). It has numerous interesting sights inside such as the courtyards and many other rooms. It houses Gandía’s International University and an Interpretation Center dealing with the golden period of this city in the 15th century. Now we move to the Germanías Promenade to visit the famouse Marqués de González y Quirós Culture House. From here we go to Sant Josep church, built upon an old mosque. There are some other interesting churches you could visit: Nuestra Señora de la Asunción Collegiate Church (late Gothic, 15th-16th centuries), Santa Clara Monastery (1425), Santa Ana Chapel (17th-18th centuries) and Sant Jeroni Monastery (7 km away from Gandía).

The City Hall from the 18th century located in Constitución Plaza is also interesting, representing the four cardinal virtues: prudence, justice, temperance and courage. From here we can visit the Fallero Museum and the Archive and Libraries Municipal Institute. San Marc Hospital was built in the 14th century and remodeled in the 16th century. It now houses Gandía’s Archeological Museum. The Escuelas Pías Plaza and the Pino Tower are also beautiful. 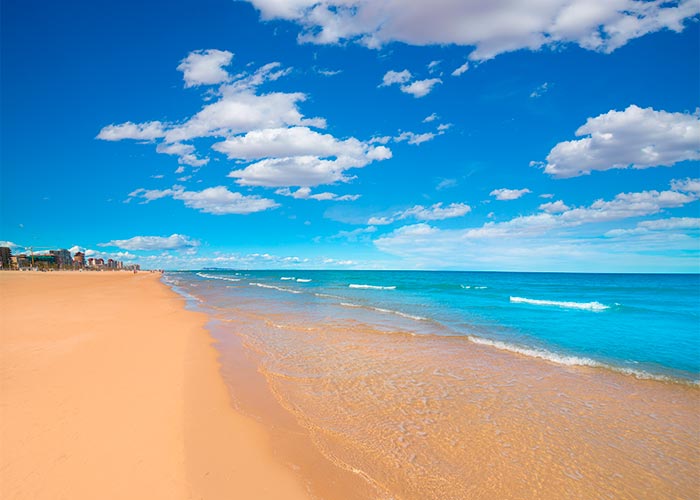 Gandía’s Port is worth a visit, especially the market on Thursday. Gandía’s coastline is 7 km long. The most famous beach is Norte beach, where most of the hotels are located. Do not miss the Bayren Castle, built by Muslims in the 12th century, upon an old Roman fortress. The Alquería del Duc is in the north of Gandía. It is an old rural fortress remodeled in the 16th century. The sundial was built in 1780.