The ancient village of Cullera

The town of Cullera is situated at the mouth of the Júcar river, on the shores of the Mediterranean Sea. Cullera offers visitors a castle, ancient museums, a marine and fishing river port and 14 km of beaches.

Plan your stay in Cullera

This town is not only full of beaches, it also has an impressive world heritage. Among the many things to do in Cullera are its staple sights: you can admire its Muslim Castle, Sanctuary of the Virgen del Castillo, and other important museums that will make your stay in Cullera as delightful as it should be. If you are planning a family getaway, you can go to Cullera Water Park Aquópolis as well as visit L’Albufera Natural Park.

The Cullera mountains, also known as “de las Zorras” (of foxes) have been considered a main landmark of this region since prehistoric times. The importance of the mountains led its inhabitants to create a large sign with the name of the city, Hollywood style.

From the historical Well Quarter, you can have access to a zigzag staircase leading to the summit where you will find the Muslim Castle, and the Sanctuary of the Virgen del Castillo (1897) and the ruins of the Carlist wars. This fortress was declared to be a site of Cultural Interest. We also recommend visiting the Church of the Saint Johns (a Neoclassical temple built over and older Gothic temple).  Inside the Gothic style Chapel of the castle, the History and Archeology Municipal Museum is situated.

On the way, Saint Ana Tower, also known as the Moorish Queen Tower, is situated on the right side (this tower contains the St. Raphael Archangel Chapel). If you are unable to climb up, you can go to April 25th Avenue to take the road (views are amazing there as well). On the northern slope of the mountains, you can see the Abric Lambert cave paintings, which are red shade drawings interpreted as animal and human figures.

If you go to St. Antonio Beach, heading north towards Cullera Lighthouse, passing through Racó, Cap Blanc and the Olive beaches, you will find the Cave Museum of the Pìrate Dragut, which revolves around the figure of a National Turkish Hero who wiped out virtually the entire population of the town in 1525 in order to employ the place for negotiations for ransom money (this place also shelters a small Piracy Museum). 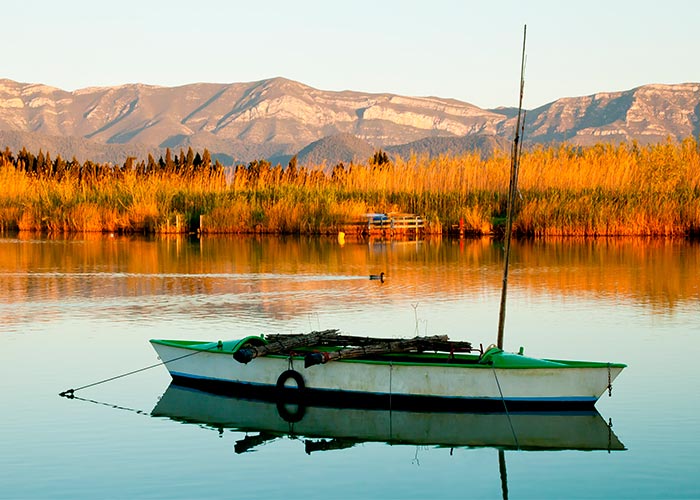 In the center of the town, you should visit the Teaching House on Cervantes Street, where the Fallero Museum is situated, holding the ninots indultados (statue models pardoned from burning) every year.

On the outskirts of this village (Saler road), you can find the Chapel of the Stone Saints, holding the Rice Museum, highlighting the importance of this product for Valencian cuisine (temporarily closed for work repairs).

On the other side of the Júcar River, going south, one can turn up to Marenyet Tower, a lookout built in 1577 as a defense against Barbary pirates. Because of a flood (Riada Gorda) happening in 1864, its original location, on the right side of the mouth of the river, was changed to the tower’s current position.

Following up the avenue, fishing lovers will be lucky, since a there is a natural lagoon, so-called L’Estany, where to practice fishing. In Sueca (4 km away), you can visit the Chocolate Museum.

Baños de la Reina in Calpe, swimming on the beach among Roman ruins
The Valencian Community hides authentic treasures such as the Sistine Chapel of Valencia or the Más información