“Ayllón is the most beautiful it can be,” wrote in 1909 the painter Ignacio Zuloaga, principal international popularizer of landscapes and types of Castilla. Near the port of Somosierra and the Royal Gorge, it was a place that attracted many historical figures, whose memory can remembered in its beautiful streets and monuments.

Plan your stay in Ayllón

The visit to Ayllón can take half a day. We recommend the climb the CL 114 to the nearby Natural Park Riaza river gorges, instead of watching vultures and pleasant walks; in summer you can swim or go canoeing in the swamp. Do not hesitate to spend one or two hours in the walled city of Maderuelo, with great views. Towards Madrid is the picturesque village of Riaza; instead of returning on the motorway, if you climb a twisty road to the Puerto de la Quesera you can walk by the Riofrío of Riaza Beech Forest or go to the nearby Hayedo of the Black Tejera; two excellent options for walkers. Those who stay more than one day can climb the 931 BU road north to visit Aranda de Duero, a town with some interesting sights and excellent food at a good price.

Located in a place of passage for the migrants and north-south communications the hill was fortified by the people of the vacceos celtibérico that gave the name Trabasosona; later the Romans called Holon or Halon, which would lead Agerholón to become Ayllón.

Unlike Burgo de Osma and near Maderuelo – fortalezas ceded by Count Sancho Garcia Muslims around the year 1010 – Ayllón remained mora outpost north of the Central System until 1085, when it was conquered by the Christians. In the twelfth and thirteenth centuries was the scene of numerous clashes nobility, being conquered several times; only reaching some stability when reigned by  queens and princesses such as Doña Berenguela and Doña Violante, among others.

In 1295 events took place that gave rise to the legend of “The Miracle of the Cross”. At that time the Jews had indicated the coming of the Messiah, so that Christians and Jews, went in procession to the convent of San Francisco. This day is interpreted as a Triumph of the Holy Cross, venerated in the festival and procession bearing that name.

Ayllón has hosted many kings during the Middle Ages, as Alfonso VII, Alfonso VIII, Fernando IV the Summoned, Pedro I and Henry II, who came to rest and hunt in the great forests of the area.

On July 16, 1411 Fernando de Antequera (Lord of Ayllon before King of Aragon) invited the Queen of Castile, Catherine of Lancaster, and her son John II. Soon after came the future saint Vicente Ferrer and his influence, the Queen granted there called “laws of Ayllón”, for which the civil rights of Jews were restricted, in order to induce them to convert to Christianity. 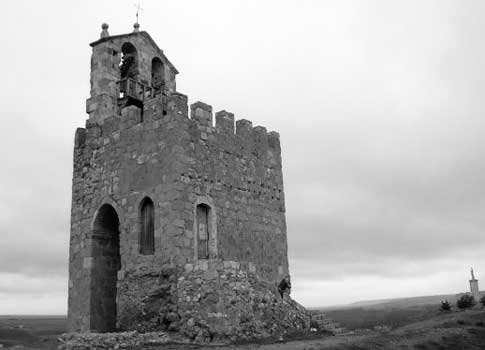 The Lordship of Ayllón was given in 1420 to great knight Don Alvaro de Luna, as a reward for successfully unleashing in Tordesillas King John II; the new Lord fortified the town, leaving his mark on various buildings. There he took refuge in his banishment and Ayllón attracted to King John II and many magnates in the days when he grabbed all the power of the kingdom.
The richness of the place is because it was the main crossing point of merino cattle transhumance between Segovia and Soria, meeting the Mesta, or ranchers-assembly of each year, in spring, north of the town during the history of Ayllon . Throughout the northern slope of the mountain there were numerous facilities for washing wool, which would then be exported abroad.

Because of its proximity to the strategic port of Somosierra, in 1808, the villa was occupied by French troops, whose bad relations with the population resulted in all sorts of destructions of heritage. In the village they burned the altarpiece of the Church of Santa Maria Maggiore, who had not even finished assembling.
In 1876 the mayor decided to tear down the door Languilla San Juan to facilitate access of large carriages to town; only the third floor remains, called “El Arco”.

In the early twentieth century it was rediscovered by the painter Ignacio Zuloaga who brought his friend Gregorio Maranon. From 16 to 23 December 1931, this was one of the places where he attended one of the first Educational Missions launched by the government of the Second Republic to bring culture to rural people.

What to see in Ayllón

The visit to Ayllón can take half a day. We recommend the climb the CL 114 to the nearby Natural Park Riaza river gorges, instead of watching vultures and pleasant walks; in summer you can swim or go canoeing in the swamp. Do not hesitate to spend one or two hours in the walled city of Maderuelo, with great views. Towards Madrid is the picturesque village of Riaza; instead of returning on the motorway, if you climb a twisty road to the Puerto de la Quesera you can walk by the Riofrío of Riaza Beech Forest or go to the nearby Hayedo of the Black Tejera; two excellent options for walkers. Those who stay more than one day can climb the 931 BU road north to visit Aranda de Duero, a town with some interesting sights and excellent food at a good price.

The visit to Ayllón usually starts from the road from Madrid and Segovia. The Villa Bridge on the River Aguisejo was built by the Community of Villa and Earth in 1661 and rebuilt in 1782 under Charles III. By accessing the town is El Arco giving access to the old walled city, immediately finding the Palacio de los Contreras, which is recognized by the brand Franciscan cord and shields of stone portal built in 1497 by Don Juan de Contreras, Lord of Ayllon; building that had previously belonged to Constable Don Alvaro de Luna. Inside it preserved coffered the first time and is a national monument.

The Pellejeros street turn left leads to the Palace Obispo Vellosillo in the square that bears his name. Built in the late sixteenth century, this artistic monument now houses the Tourist Office and Museum of Contemporary Art with more than 250 works by painters of the School of Fine Arts of San Fernando (like Genovese, BARJOLA, Lucio Muñoz ..) who came to paint there; also it includes a workshop of artistic restorations.

Down the street del Pozo you can access the Tower House, which is now a social center office and Caja Segovia; It belonged in the early sixteenth century to the Cabildo, then was passed into the hands of various noble families.
The Town Hall, at the head of the Plaza Mayor, was the residence of the first Marquis of Villena of retaining the coats of arms on its facade. The building was a palace in the early sixteenth century, modifying its facade in 1622 and adapted in 1640 for administrative services and boardroom; in 1756 the clock was placed. French troops between 1808 and 1809 occupied the building, leaving it shattered.

Flanking the City of San Miguel church and the House call Eugenia de Montijo. The church of San Miguel was the last parish in 1902 grouped in the Plaza Mayor. Highlights include a bulrush, cover and Romanesque apses. The cover looks like an arch with rosettes, zigzag and checkered. The door was brought from the chapel of San Sebastian Church of San Juan.
Interested in the apse, with foliated capitals and corbels, and the central window in aspillera. Curiously, in 1675 the council agreed to build on it a wooden balcony to attend bullfights, a recent restoration has been removed. The Palace House of the Empress Eugenia de Montijo in 1693 belonged to the family Vellosillo, with the name of “House of the daughters.” In the mid-nineteenth century, it belonged to Dona Maria Francisca de Sales Portocarrero, older sister of the Empress Eugenia de Montijo. In its cover contains the heraldic shield of the Empress of France, because there rested on routes between Paris to Madrid.

Behind City Hall on the Plaza Angel Alcazar stands Santa Maria Maggiore, the oldest parish. It was built on the site of the synagogue closed by San Vicente Ferrer in 1411, also has elements of a previous Romanesque building. The works to lift Santa Maria Maggiore began in 1613 and ended with bulrush 1724. Outside you can admire the crismón and sculptures from other temples. The current altarpiece was acquired in 1840 the owners of a convent to replace the previous altarpiece, burned by the French in 1808. It includes the image of the Virgen de la Estepa venerated as patron and an altar dedicated to Santo Cristo de Santiago .

There are other houses and palaces that give an idea of ​​the splendor of Ayllón (Casa de la Sal, Casas de San Juan, Casas de las Beatas de Lara, Houses Villazán) in the Real streets and El Parral, and around the Plaza Angel Alcazar . Calle del Parral you reach the Convent of the Franciscan Conception, founded in 1528 by Don Diego Lopez Pacheco, whose coat is on the cover.

In the Real Street is also the House of the Eagle, which was built in 1615 and includes a coat of arms of families Guzman Robles, Cabrera and Maldonado. Following up the street Dr. Tapia and San Juan Street, we come to the Romanesque church of San Juan, whose tower was part of the wall. Privately owned, it has a Gothic chapel dedicated to St. Sebastian and a triumphal arch that leads to the chapel with the graves of families Nuñez and Daza. In 1621 it was built behind a refrigerator, the ice during the summer months was sold.

Leaving the church, by the Mediavilla Cruise arrived at the Calle del Castillo, for it is promoted to Martina Torre, which is what is left to do in Ayllón of the early church of San Martin, in turn built on the old castle , destroyed in 1295. This tower preserves Celtiberian remains.

On the Paseo de las Bodegas we arrived at the Arab wall Los Paredones. The Castle was on a hill surrounded by a mud wall called “The Walls” with perpendicular beams embedded in the walls and panels supported on them. In the filling with soil you can seee ancient pots. The walls were rebuilt from 1420 by Don Alvaro de Luna; They had three doors: “El Arco”, “Languilla Gate” and “Puerta de San Juan” or “Santa Lucia”. The last two were demolished in 1876 to allow carriage entrance.

Outside the village, towards Aranda de Duero, it is the Old Cemetery, whose Romanesque doorway belonged to the Roman Hospital of Sancti Spiritu. A tourist offer of special relevance in Ayllón are your Guided tours dramatized on historical aspects of the town occurred thirteenth century XVI. Characters like Don Alvaro de Luna, San Vicente Ferrer or Catalina Lancaster. Scenes of everyday life are depicted by actors for nearly two hours.