Authentic medieval village on the marsh

In an elongated hill surrounded by a wall is a town that maintains the architecture of adobe, wood and ashlar stone, as well as the medieval atmosphere highlighted by the newspaper fluttering the griffon vultures of a nearby bird reserve.

Plan your stay in Maderuelo

The walk through the town can take us midmorning, then go with binoculars and footwear suitable to see vultures in the nearby Natural Park of the Hoces River Riaza, In summer it is possible to bathe or canoe in the marsh. A good excursion can be down the CL 114 to the medieval village of Ayllón, especially if it is back to Madrid. Those who stay more than a day can go up the road BU 931 north to visit Aranda de Duero, a town with some very interesting places and excellent gastronomy at a good price. For its proximity wine lovers can choose from the wineries of the Ribera del Duero DO visitable.

The region was formed by dense forests in which the main occupation was the hunting and the cattle raising. It was populated by the Celtiberian tribe of the Arévacos, which after being dominated by the Romans, was included in the demarcation known as the Conventus de Clunia (in Coruña del Conde, present province of Burgos). On two stone blocks has been found chiseled what would be the board of a table game used by the Romans, called alquerque. On the long hill, the Visigoths also had to be installed, leaving some stone stele with geometric inscriptions.

In the year 1010 the count Sancho Garci’a of Castile is called by the prince cordobés Suelimán to help him to put order after the death of Almanzor; As payment received numerous fortresses located between the river Duero and the mountains of the Central System. Towards 1076 the king Alfonso VI grants a generous fuero to the town of Sepúlveda that allows to repopulate the whole zone, a period in which it was possible to wallow and to construct the castle.

Towards the end of the eleventh century, the hermitage of Veracruz is erected along the Riaza River; Shortly after the Community of Villa and Land of Maderuelo was constituted, that got to gather a ten of parishes; Having found in the locality rest of thirteen distinct temples. 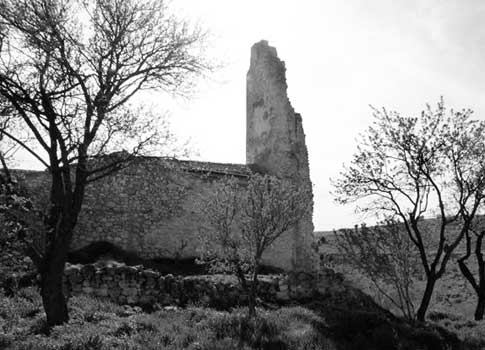 Ruins of the old castle

Until the XV century Maderuelo will be exchanged for the royal dynasties. From Doña Leonor de Navarra to Don Juan de Aragón and Sicilia, who appointed regidor Don Diego de Sandoval. When ascending to the throne Navarro don Juan realizes the barter of this town by the one of Castrogeriz in 1430; This is how Maderuelo passes into the hands of Don Alvaro de Luna, validated by King Juan II of Castile.

In the time of Kings Católicos was regidor Gabriel Fernandez Manrique, count of Osorno, that ceded his government to gift Juan Pacheco, marquess of Villena.

During the Liberal Triennium, by the Royal Decree of January 27, 1822, Maderuelo and other Segovian populations were annexed to the province of Burgos. This was repealed by Ferdinand VII a year later.

In 1951 the Linares reservoir was inaugurated on the Riaza River, which submerged the town of Linares del Arroyo, causing the practical depopulation of Maderuelo. This condition of almost uninhabited place induced the naturalist Félix Rodriguez de la Fuente to promote the Refuge of Raptor Birds of Las Hoces del Riaza, inaugurated in 1975 by the then Prince of Spain Don Juan Carlos de Borbón.

What to see in Maderuelo

The walk through the town can take us midmorning, then go with binoculars and footwear suitable to see vultures in the nearby Natural Park of the Hoces River Riaza, In summer it is possible to bathe or canoe in the marsh. A good excursion can be down the CL 114 to the medieval village of Ayllón, especially if it is back to Madrid. Those who stay more than a day can go up the road BU 931 north to visit Aranda de Duero, a town with some very interesting places and excellent gastronomy at a good price. For its proximity wine lovers can choose from the wineries of the Ribera del Duero DO visitable.

Before entering the village, next to the reservoir is the Vera Cruz Hermitage, possibly erected towards the end of the 11th century on a Visigothic temple; Its impressive Romanesque frescoes were transferred to the Prado Museum, with a reproduction in the church. In front of the village is the Hermitage of the Virgin of the Castroboda, patron saint of the town, erected at the end of the XVIII century.

To enter the village you must cross the wall through an arch that gives access to the Plaza de San Miguel, presided over by the Church of San Miguel. It is a late Romanesque temple whose bell was tapped until a few years ago to ward off the disasters that could lead to storms. The polychrome carving of San Miguel of the sixteenth century is preserved, a carving of the Virgin of the Descalzos brought from a disappeared hermitage and the carving of the Virgin of the remedies. Also carved stones with a woman lying down, a cross and a lion in one of the walls of the ships. Desacralized, it is used for cultural uses; There, on the night of Reyes proceed to the distribution of toys to the children of the town.

There are also three Romanesque houses. One of them is the residence of a Faustino Abad leather craftsman. 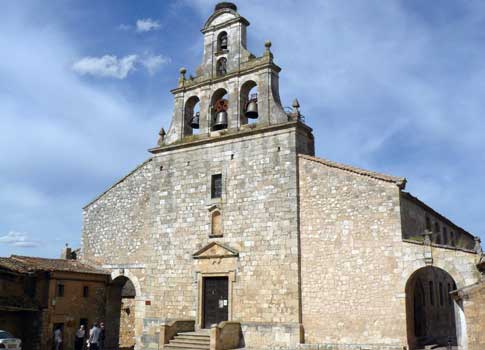 The Plaza de Santa María separates the two main streets of the town: Calle de Abajo and Calle de Arriba in whose subsoil are the labyrinthine passages; According to a local legend, in one of them is hidden the treasure of Don Álvaro de Luna, the valido of the king Juan II of Castile.

At the end of the Calle de Arriba is the Church of Santa María. It is a Romanesque temple of rectangular plant and circular apse; Has in its side another ship with a covered portico in which are the so-called Iron Gates. The church is accessed by the so-called Puerta del Perdón; Inside it draws attention its original wooden roof; Also the baptismal font of carved stone and the choir from which it leaves the staircase to the steeple of century XVII with its five bells. On the altars of the side aisles is the Santo Cristo del Crucero (15th century) that the parishioners take in procession to implore the rain, as well as a shrine carved in wood used on Thursday and Good Friday. The main altarpiece was the work of the segovian Gabriel de Sosa (1580) proceeding from the hermitage of Castroboda. The church preserves in a glass urn the uncorrupted mummy of a girl who was found dressed and dressed; Her clothing is not complete because she was expelled. Of the old Castle only a tower remains in the back of this church and in its vicinity remains of the old wall.

In the surroundings is the Natural Park of Hoces del Riaza. In the valley of Montejo there is a colony of griffon vultures promoted by the naturalist Felix Rodriguez de la Fuente. At the bottom of the gorge is the hermitage of the Casuar, which was erected by Benedictine monks.

A holiday in Andalusia has many possibilities. Without going any…

Coca
[vc_row][vc_column][vc_custom_heading text="The traditional city" font_container="tag:h2|text_align:left|color:%23000000" google_fonts="font_family:PT%20Sans%20Narrow%3Aregular%2C700|font_style:700%20bold%20regular%3A700%3Anormal"][vc_column_text]Twice taken in treachery by the Romans, it was the Más información