A crossing point in the Ribera del Duero route, this villa has the oldest map of Spain and several wine cellars that you can visit. Its industrial aspect hides several treasures and an excellent gourmet offer.

What to see in Aranda de Duero

Things to do in Aranda de Duero normally involve the Ánimas Wine Cellar, San Pedro Regalado Sanctuary, and Sinovas church (3 km away on the road heading for Burgos); which should not take you more than half a day. Other intesting main sights this city has are the Hoces of the Riaza River Natural Park and eating in the medieval village called Maderuelo. Taking the BU910 heading for the northeast, you can reach Yecla’s Gorge and eating in the near Santo Domingo de Silos. For wine lovers, there are many certificate of origin Ribera del Duero wine cellars that you can visit. Do not miss the tapas this town offers.

Plaza Mayor is a good starting point. Then, you might want to go the Interpretation Center of Architecture Associated with Wine (CIAVIN), located in the old House of the Juries which houses the Tourist Information Center. This space employs part of the medieval wall to which the building is annexed. You can book guided tours of underground wine cellars. For example, the Ánimas Wine Cellaris an interesting place which highlights the importance of wine for this locality. From there we continue through the Honey street, reaching the imporatnt Santa María la Real Church, built between the 14th and 15th centuries. Its façade is a great retablo, its tympanum deals with the Virgin in the grotto of Bethlehem.

Behind the temple we find the Tercios Plaza to head for San Juan Church (Gothic in style). Its façade is decorated with several beautiful capitals and an image of St. John the Baptist. The bell tower looks like one of a castle. The temple houses the Sacred Art Museum of the city. There, you can see an interesting plateresque retablo with several paintings from the 16the century. In the Rollo Plaza we find San Juan de la Vera Cruz Church, built in 1620. 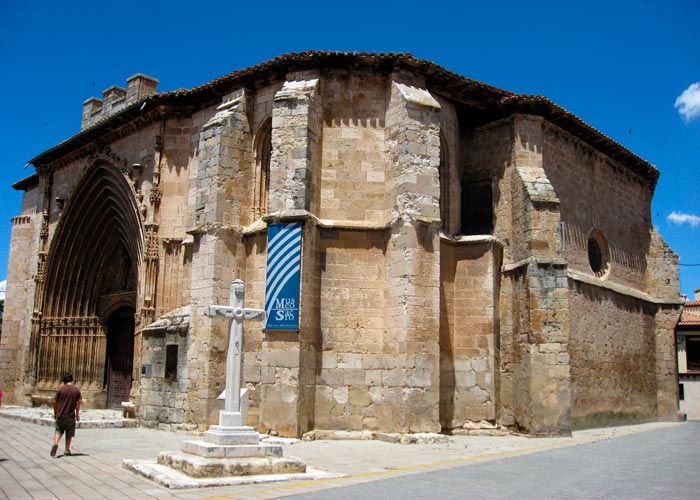 This city has three main spots: the Roman Bridge, the Conchuela Bridge and the Romanesque Tenerías Bridge. There is also a Sculpture Museum outdoors, and several architectonic sites in the Virgen Promenade such as Humilladero and Virgen of the Viñas Chapel. In the outskirts of the city we find the Train Museum. In Sinovas, 3 km away heading for the north we find San Nicolás of Bari Church(Romanesque façade from the 13th century). You can call to the telephone numbers (+34)619022445 or (+34)947504835 for the people in charge to open it.