The most beautiful Nasrid prison

This beautiful town of Granada, situated in the banks of the river Guadalfeo, is known for its cultivation of sugar. In this village five kings of Granada were imprisoned. It was also the scene for some tragedies during the Independence War. Nowadays it is one of the favorite locations for tourists on the Tropical Coast, which allows you to go from the sea to Sierra Nevada Natural Park.

Plan your stay in Salobreña

Located on top of a rock, this gorgeous village is full of whitewashed houses and presided over by an impressive Muslim castle. Walking up through the steep streets influenced by their Muslim past, you will find the main sights that Salobreña offers: Nuestra Señora del Rosario Church, Casa Roja and the Villa of Salobreña Historical Museum. Things to do in Salobreña can take you one entire day, unless you are planning to visit the surrounding historical cities (Motril and Almuñécar) or to practice some active tourism in the near Sierra Nevada Natural Park.

Before going over what to see in Salobreña, it is worth knowing a little about its history. For some 6,000 years the place has been inhabited. So there are material remains from the Neolithic period in the Cueva del Capitan. At that time the Peñón of Salobreña was an island and the landscape, today a fertile plain, was maritime. With time the environment changed thanks to the contribution of sediments from the river. Thanks to them the island stopped being an island and the promontory became a hill.

Around the 8th century BC, the Phoenicians arrived and created several commercial factories. Around the 6th century BC it fell into the hands of the Carthaginians, who became part of the Punic League of the Strait. Within the framework of the Punic Wars, Rome took the territory of the promontory. During the High Empire (1st-3rd century) the place was organized by villages. At the end of the Latin rule the town was already known as Segalvina.

With the beginning of the Arab invasion it immediately became a rural town. In 880, during a period of internal crisis in the emirate of Córdoba, a Muladí leader created a guerrilla group composed of Mozarabs and other discontented sectors of the population. For three decades, this revolt dominated a wide territory in the current provinces of Granada, Malaga and Cordoba. The fortress of Salobreña would be one of its bastions until 912, when it was surrendered by the army of Abderramán III.

At the end of the 14th century, under Nazarite rule, it rose as an important city on which several nearby places depended. Inside the citadel there was a royal palace. Up to five kings of Granada were imprisoned there, victims of the conspiracies of their Court. On the other hand, the area was notably enriched by the production of sugar, adding a lot of population.

Later, during the last Nasrid civil war, El Zagal took control of Salobreña. It would remain for seven years, until it was handed over to the Catholic Monarchs in December 1489. The following year an attempt was made by Boabdil to take the place. The move had the support of the Moors, who would be expelled from the fortress after the monarch of Granada was defeated. To guarantee security, Ferdinand the Catholic appointed the famous knight Francisco Ramirez of Madrid, El Artillero, as the warden of Salobreña. 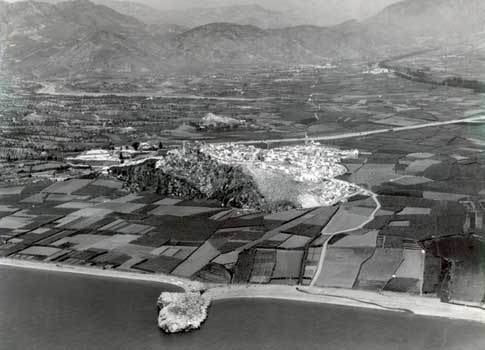 View of the Peñón of Salobreña and its beach in 1963.

In 1494 a strong earthquake occurred which caused serious collapses in the Alcazaba. On the other hand, from 1497 Castilian settlers resumed the cultivation of sugar, abandoned after the departure of the Muslims. The few Mohammedans who remained participated in 1568 in the Insurrection of the Alpujarras. For this reason they were expelled from the country.

During the 16th century the sugar industry was booming. However, two centuries later it was about to be replaced by cotton. Due to its ineffectiveness against artillery, in the middle of the 18th century the Salobreña Castle and the walls were no longer maintained.

During the War of Independence the town was an important centre of resistance. In the autumn of 1810 the Salobreña Castle was defended by a legion of volunteers. However, these surrendered to General Sebastiani’s Frenchmen in exchange for the respect of their lives. Breaking their word, the sixty prisoners were hanged by the Napoleonists. This led to a savage persecution of the French. The reactionary idea became so widespread that, in 1814, the Mayor of the Villa publicly burned a copy of the 1812 Constitution.

In the 19th century, sugar cane cultivation was once again recovered. For this purpose, techniques brought from Cuba were used. Today it is an important tourist center, which allows the enjoyment of both the sea and the nearby Sierra Nevada.

What to see in Salobreña

The main sight in this village is the castle (where five kings were imprisoned during different time periods), located on top of the rock, surrounded by the whitewashed houses that constitute the old town. We recommend you starting your trip in the Alcazaba (10th century), which used to work as a royal prison in the 14th and 15th centuries.

That original Nasrid Alcázar was made up of a walled enclosure with a beautiful garden and four towers: the New, the Old, the Polvorín tower, and the Homenaje Tower. There is another enclosure built by Castilians at the end of the 15th century which includes the Cubo and Batería towers. The third enclosure is protected by the Coracha and the Water Tower. 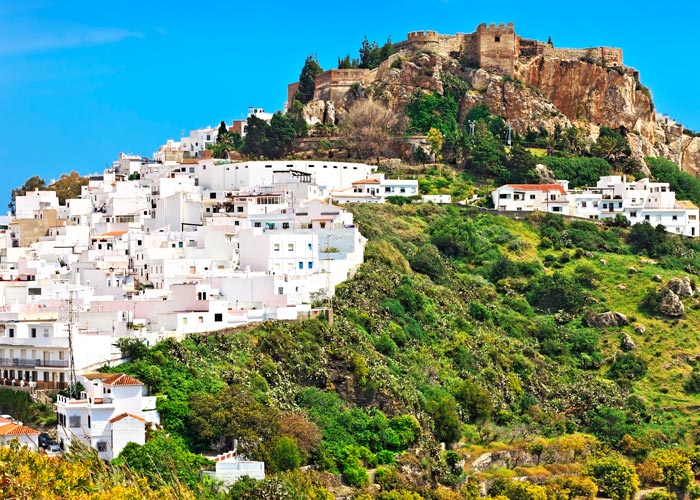 Next to the castle, there is the Nuestra Señora del Rosario Parish Church (16th century), built upon a solar that used to be a mosque. A Mudejar construction which draws the attention of visitors because of the bell-tower employed in the past against the Berber attacks. We highlight the Arab style façade and the image of the Virgin of the Rosario, from the 16th century.

Next to the town hall, in the Plaza de la Iglesia, you will find the Bóveda (16th century), which linked to Albaicín quarter to the old medina (employed for goods traffic).

The Villa of Salobreña Historical Museum has the archeological collections that date back to the occupation of this territory and its surroundings. A complementary visit can be made to the old Prison, facing this museum. You cannot either miss Casa Roja, which used to be the residence of the manager of the old sugar factory.

If you decide to walk around the coast promenade, you will reach the Peñón, which provides the most amazing views of the entire village. One of the last Sugar Factories in Europe, built in the 19th century, can be found in La Caleta.

Andalusia, Granada, most beautiful villages, white villages
It may interest you...