The Fortress of Guzmán el Bueno

Tarifa is a small town in the province of Cádiz, which can be found on the southernmost point of the Iberian Peninsula. Since it faces Morocco, one can see two continents from this beautiful town. A place made famous by the chivalry of Guzmán el Bueno, Tarifa is the perfect place to birdwatch, windsurf, and enjoy the view.

Plan your stay in Tarifa

To thoroughly familiarize yourself with Tarifa, you should plan for your visit to last several days. It is considered a good place to windsurf, kitesurf or go to the beach. It is also an amazing place for bird-watching in the Strait Natural Park and Barbate Marismas.

From Tarifa’s port, one can organize aquatic outings to see cetaceans or attend tunny fishings. Close to Tarifa, you can also visit Algeciras or Vejer de la Frontera. Additionally, we can guarantee that your stomach will be happy in Tarifa!

To fully enjoy what to see in Tarifa, it is important to know something about its history. Thus, in the vicinity is the Cueva del Moro. This is the most southern Palaeolithic sanctuary in Europe. In the cave there are engravings of horses that are about twenty thousand years old. Later there was a Carthaginian settlement in the town, of which traces have been found. The nearby Ensenada de Valdevaqueros hosted the Roman town of Mellaria. Its current name is somewhat more striking: Casas de Porro.

It is likely that the town was occupied by the Visigoths. Epigraphic inscriptions in the subsoil of the fortress, from the 7th century, would confirm the hypothesis. Be that as it may, during 710 the Muslims made their appearance. The Muslim commander Tarif Abu Zara would call Al Yazirat Tarif to the Island of Las Palomas. Currently linked to the continent by a road, it is the southernmost place in the Iberian Peninsula. One year later the invaders built a medina that gave birth to the current town.

It was not until the 10th century that the active fishing port was fortified. Thus, the caliph Abderramán III finished the walls in 960. Seventy years later, Tarifa depended on the Taifa of Algeciras and soon after that it became part of the Taifa of Seville. However, after the Battle of Navas de Tolosa (1212) the Almoravids were expelled. For this reason Tarifa became dependent on Algeciras again from 1231.

In 1273, the King of Granada handed over this stronghold and that of Algeciras to the Marinids. In exchange, he asked for their help against the Castilians. Sancho IV besieged the fortress during 1292. After winning, he entrusted his defence to Alonso Pérez Guzmán. The Moors soon planned a counter-attack. In this way a siege took place during which Guzmán earned the nickname of El Bueno. Without giving up, in the autumn of 1340 they laid siege to Tarifa again until they were defeated at the Battle of Salado. 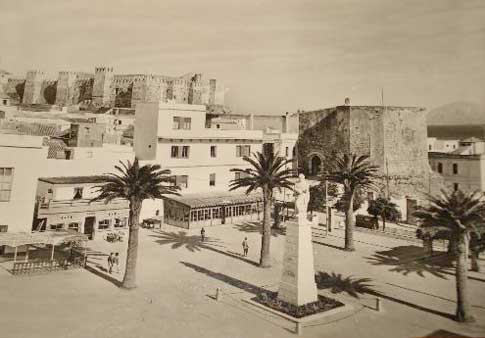 Monument to Guzmán el Bueno and, in the background, the Castle

In 1514, Charles I granted the Marquisate of Tarifa to Fadrique Enriquez V, Count of Los Molares. The nobleman would commit abuses against the interests of the neighbours. Therefore, in 1530, the villains asked the king for help to stop the marquis’ illegitimate actions. The conflict would end in 1596, when the Royal Chancery of Granada ruled in favour of the people.

Tarifa became a relevant position again from 1704, after the takeover of Gibraltar by the English. In October 1811, during the War of Independence, General Godinot’s French attacked the city and were repelled. The soldier returned to Seville where he committed suicide. Ten days later, General Leval tried again to attack, even entering the fortress. However, everything ended up in retreat as well. The Spanish commander Francisco Oliver-Copons would be granted the title of Count of Tarifa in 1836.

In December 1939 the Defensive Plan for the Strait of Gibraltar was approved. Thanks to it all the surroundings of Tarifa were fortified. Today, the town is a mecca for water sports practitioners of board and sail.

What to see in Tarifa

A good start to your trip is Puerta de Jerez, which is the only preserved gate among four it used to have. The door provides access to the inside of the walled fortress of the Moorish Alcazaba, reformed by Castilians in the 14th century.

We recommend taking a detour through the typical narrow streets of this town to see classic Andalusian houses and end up at Guzmán el Bueno Castle, built in 960 A.D. by order of caliph Abd-ar-Rahman III. Later on, Christians added the Homage Tower in the 14th century, reformed in the 17th century to introduce artillery in its walls.

Next to this castle you will find Santa María Church, built in Gothic style in the 13th century upon a Mosque. We would also like to highlight the importance of the image of the Inmaculada from the 16th century.

It is worth going up to the Walls and to walk through them. Also, Miramar Viewpoint offers a panoramic costal view, including Las Palomas Island, the southernmost part of Spain, where you can see the point of entry of the Moorish explorers in 710 AD, an antecedent of their invasion.

Among the temples to visit in Tarifa we highlight San Mateo Church (built in Gothic style but with a Renaissance style gate and a Baroque style monumental façade) and San Francisco Church (rebuilt in the 18th century in a Neoclassical style), which holds the image of Cristo del Desconsuelo (16th century). 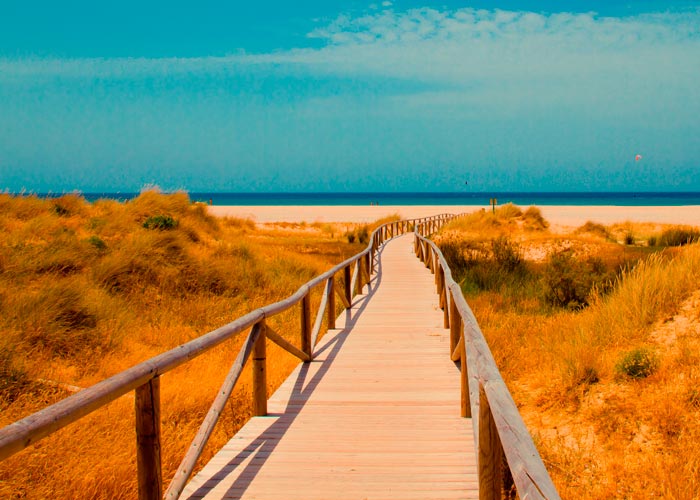 A walk through the port allows you to imagine the transportation and fishing labors that help Tarifa’s economy thrive, apart from tourism. From the town there is a ferry line to Tangier in Morocco. The fishing boats docked there supply fish to the local restaurants.

Regarding beaches, we do recommend Los Lances and Punta Paloma because of their clean water and sand. Like those of Sancti Petri or Roche, they bring great fame to the Cadiz coast.