The village of the unfortunate queens and traditional culture

The town is a great place for a walk and has many places to visit if you are a lover of literature. Adding up the rest of the heritage, the tour of what to see in Urueña takes at least half a day. Very close by are the Church of Nuestra Señora de la Anunciada and the Monastery of Santa Espina, which would take the rest of the day. To extend the getaway you can go to Tordesillas or the provincial capital: Valladolid.

The origins of Ureña

The place name seems to come from the pre-Roman voice Oronna or “stream of water”. In turn, it alludes to the spring under the hill where the town is located, which provided water to the residents until 1954.

The Toresana Bridge, with sections of the road that joined Zamora and Palencia, indicates that it was occupied by the Romans around the first century B. C. Much later it was repopulated by the Christians, as early as the 10th century. During the reign of Sancho II of Castile, the town was named Head of the Infantado de Valladolid. This brought prosperity to Urueña throughout the Middle Ages.

During the reign of Sancho III, it became a border of the kingdom. In this way it had to be fortified again. The Castle of Urueña was home to two women who were abused by their royal husbands. The guests of Urueña Castle did not always go there for pleasure. For example, Sancho III of Castile imprisoned the Castilian Count Pedro Vélez in the fortress for being caught with “his tights at his knee and his doublet unbuttoned” together with a carnal cousin of the king. On the other hand, the regent of Castile, Fernando de Antequera, later King of Aragon and father of Ferdinand the Catholic, used it as a prison.

The knight Don Pedro Girón was elected Master of Calatrava in 1445. Shortly afterwards, John II made him Lord of Urueña. Later, his son Alonso Téllez Girón was named first Count of Urueña. In the middle of the 16th century they became Dukes of Osuna and Marquises of Peñafiel, maintaining the lordships until their abolition.

In 1876 a fire affected a large part of the village, almost 90 houses. Some of the buildings still have the traces of its reconstruction. Almost one hundred years later the village was declared a Historic-Artistic Site. It was also named Villa del Libro, a distinction it shares with Blanca (Murcia) and 20 other European towns. Thus, it is a town with more bookstores than bars.

What to see in Urueña

This tour of what to see in Urueña begins by going through the Puerta de la Villa of its well-preserved wall. The defences enclose the hill where the place is located. Its line reaches the ruins of the Castle of Urueña, from the 15th century. From the fortress, the square keep and circular towers have been preserved. It currently serves as a cemetery. 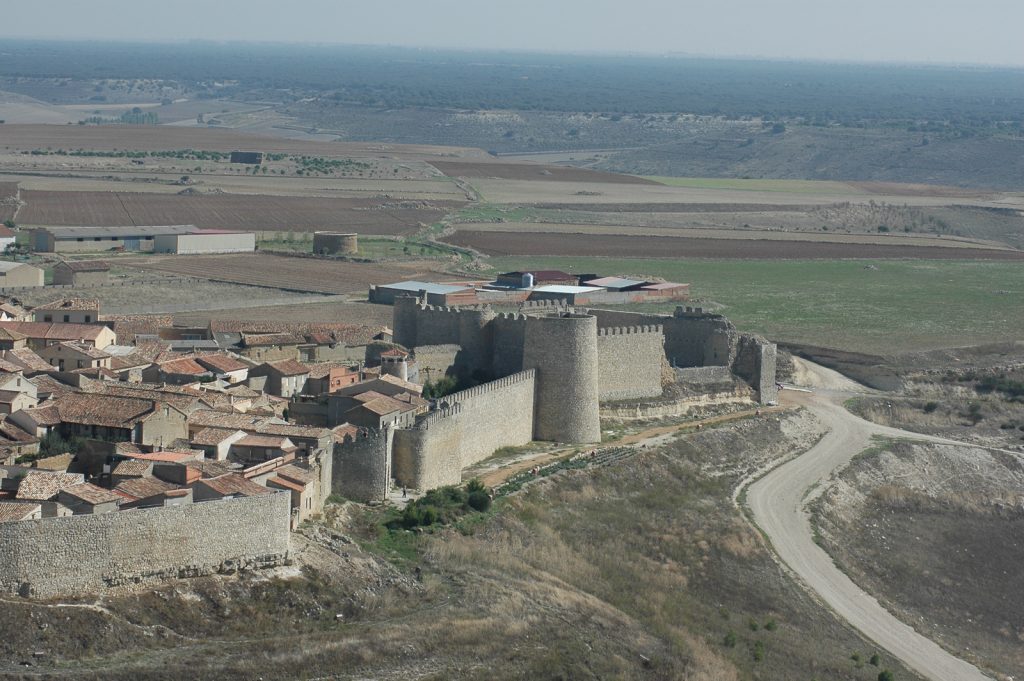 Following the promenade along the wall, there is a viewpoint over the Monjes Torozos. Thanks to this viewpoint you can see the whole perimeter of the town. The walk ends at the Puerta del Azogue, protected by a tower. Nearby is the Church of Santa María del Azogue (16th and 18th centuries). In later reforms the belfry, some windows and pinnacles were added. Inside it is worth mentioning an old baptismal font, several well-made images and an altarpiece (17th century).

Near the church of Santa María del Azogue stands the old nobleman’s house known as Casona de Urueña or Casona de Mayorazga. It belonged to the bishop of Calahorra and houses the Fundación Joaquín Díaz. This musicologist, who specialises in oral tradition, has collected some 600 musical instruments, sheets of string, alleluias, lyrics, ancient narrative, records, photographs and recordings. It includes a Virtual Museum, a Gramophone Museum, a sound archive of ethnographic themes and a Library. 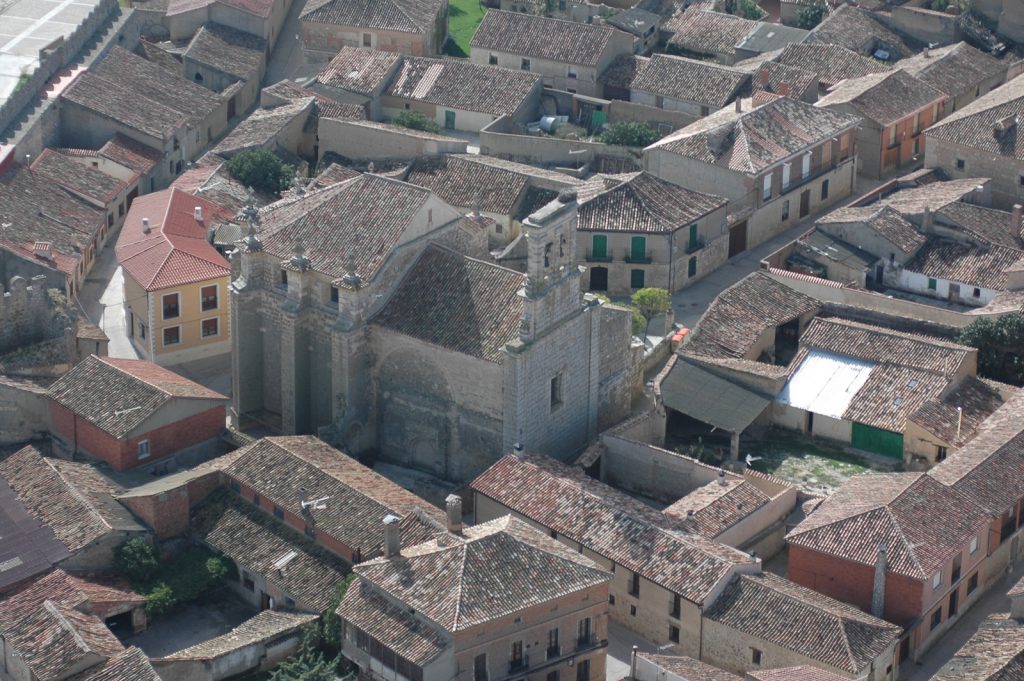 In an annexed building is the Museum of Bells, with more than twenty examples dating from the 15th to 20th centuries. Nearby there is another space of the style to be seen in Urueña: the Urueña Music Museum. Its collection includes instruments from the sphere of the composer and musician Luis Delgado

The complete ethnological offer of Urueña also includes a Visitors’ Centre about the local history located in the premises of the tourist office to understand its history. On the Paseo del Oriente, there is the Mercedes Rueda Archaeological Hall, which presents temporary exhibitions. In the same street, the Miguel Delibes e-LEA Centre was set up.  It is a space for reading, writing and their applications where various educational and cultural activities on the subject are carried out. Inside it is possible to visit the Story Museum, which deals with the creations of the illustrator Rosana Largo.

Throughout the village there are several specialized shops that complete the literary offer. Thanks to this, it has earned the reputation of being “the village with the most bookstores with bars”. A real landmark.

To continue with what to see in Urueña, you must go to its surroundings. In the valley, the Church of Nuestra Señora de la Anunciada (11th century) was built. It is an unusual example of a Lombard Romanesque temple in Castilian lands. Its creation is due to the bishop of the diocese to which it belonged at that time was Catalan. Built on the remains of a Mozarabic monastery, it has a rectangular floor plan with three naves and three semi-circular apses at the head. The Lombard exterior decoration is shown in flat pilasters and blind arches.

Between 1745 and 1748, the architect Andrés Julián de Mazarrasa, who belonged to a family of stonemasons and architects from Trasmiera (Cantabria), made the design and set the building conditions for the construction of a dressing room. The new space of Nuestra Señora de la Anunciada would have a square floor plan and a dome on pendentives. In this way, access to the Virgin would be facilitated by means of a double circular corridor that borders the apse on the outside. The exterior wall was perforated and a window was created to allow illumination of the image. 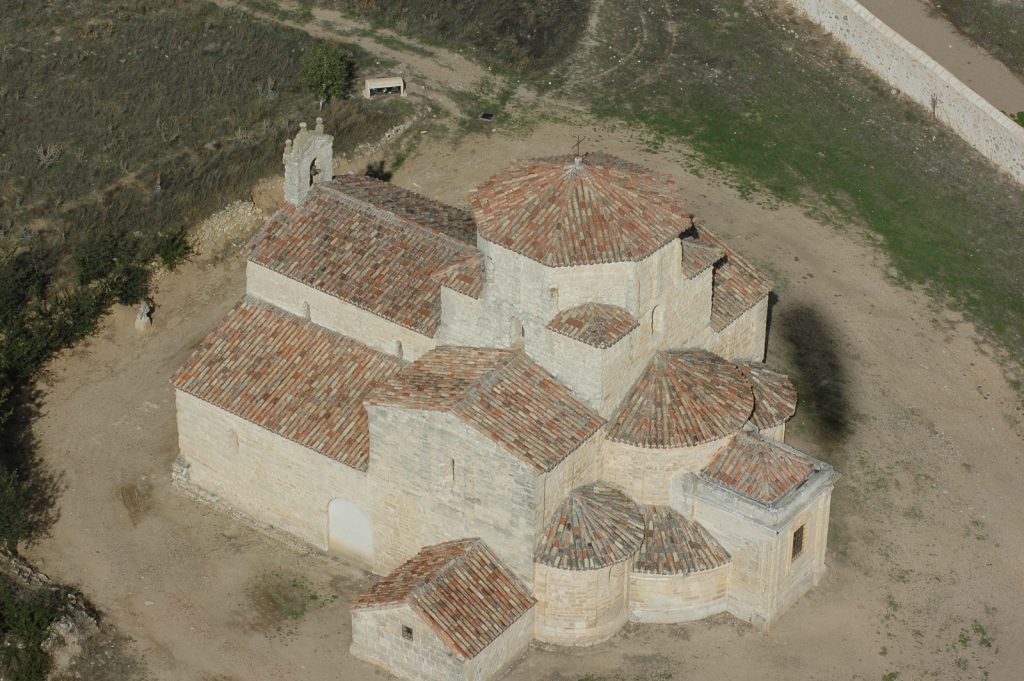 The last great monument to be seen in Urueña and the surrounding area is the Monastery of Santa Espina. Doña Sancha de Castilla decided to found it in 1147 to guard the relic of one of the thorns in the crown worn by Jesus Christ, which is still preserved. At first it was inhabited by the monk Nivardo, sent there by San Bernardo de Claraval. French monks from the Cistercian Order arrived with him. This community ruled it until it was expelled in 1835 by the decree of disentailment.

The Santa Espina Monastery is accessed through a triumphal arch from the 16th century. Very close by, a monolith reminds us that the meeting between Philip II and Don Juan of Austria took place there. The exterior and the cloisters are from the 16th century, while the façade and towers of the church are neo-classical (17th century). Of the original building only the chapter house, the sacristy and the cloister library (12th century) remain. Today the building serves as an agricultural training school. The Rural Life Visitors’ Centre is located next to it.

Free parking next to the Quicksilver gate, on the walls. Visitors are not allowed to circulate and park inside the walled enclosure except in exceptional cases. The town can be easily visited on foot.

Here is the main festivity to see in Urueña: Patron saint’s day of the Virgen de la Anunciada (25 March).

These are other events to see in Urueña: Urueña Summer Concerts (Sundays in July, organized by the Fundación Joaquín Díaz).