Twice taken in treachery by the Romans, it was the birthplace of the Roman Emperor Theodosius. In the second half of the 15th century, the Fonseca family gave it an imposing brick castle, which was a major historical landmark and several excellent mausoleums preserved in the church. Since the 19th century it owes its prosperity to the resin of its pine forests. Without a doubt, what you see in Coca unravels a very interesting experience, to say the least.

Plan your stay in Coca

The extraordinary Moorish castle and the Church of Santa Maria, along with the Puerta de la Villa and stone boars are what you always have to see in Coca; a journey that can take about three hours.

A few kilometers to the west is one of the finest Roman villas and least visited of Spain: the Almenara-Puras; visit almost essential. To the north are two other important medieval towns: Cuellar and Olmedo (closer, but in the province of Valladolid). Another option is to top off a second day of the getaway in Madrid direction (south), next to the highway is the major Arevalo, where it is also possible to use half-day visit.

The offer to stay overnight and the local gastronomic options are very limited. The best possibilities to book in the surroundings are listed on the page Sleeping and Eating in Coca. Do you want to know the places to see in Coca?

To know everything there is to see in Coca it is important to know its history, because both walk hand in hand.

The origins of Coca: Celiberian and Romans

It is located on a hill with several rivers around it. Since 550 B.C., Cauca became one of the most important towns of the Celtiberian tribe of the Vacceos, with a perimeter of twenty hectares and about six thousand inhabitants. From them derives the Caucasian people.

Four centuries later, and after numerous sieges, the rich city was extorted by the Roman general Licinius Lucullus. He managed to get its inhabitants to give him the astonishing amount of 2,216 kilos of silver.

Under the pretext of keeping peace with the neighbouring tribe of the Carpetans, he demanded to leave a small garrison there. However, upon entering its walls, the legionnaires killed the entire male population.

The Romanized Caucasians would later support General Sertorius in his rebellion against Rome. In 74 B.C. General Pompey requested that they take in a group of his wounded in combat. Once inside these turned out to be chosen troops who took control of the city. Fortunately, the little resistance prevented another massacre.

In the following centuries, it was a prosperous place where important Hispanic-Roman families lived. The Roman Emperor Theodosius I the Great was born there around the year 346.

In 939 it had been repopulated by the Christians and was razed to the ground by the Caliph Abderraman III. Around 1085, Alfonso VI took it over again, ordering the repopulation to Raymond of Burgundy, who used the remains of the Roman and Visigothic walls to fortify it.

It was a royalty town, and was highly regarded by the kings. In 1207 Alfonso VIII acquired an inheritance for 500 maravedis. The town became part of the properties of the King of Navarre.

This happened until 1439, when John II of Navarre ceded the town to Iñigo López de Mendoza, Marquis of Santillana. In 1452 he exchanged it for Saldaña with Alonso de Fonseca, the future Archbishop of Seville. The following year, Fonseca obtained royal authorisation to build a castle, hold a free market and even mint coins. 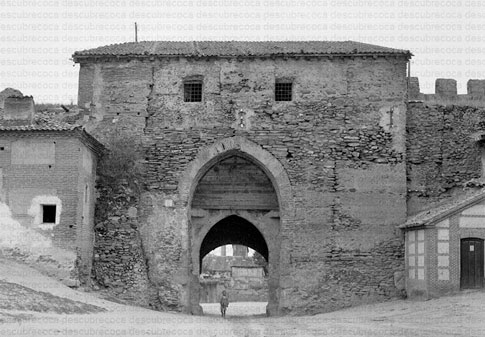 During the Castilian civil war the Fonsecas supported Alfonso and Isabel against their half-brother King Henry IV. Between June and August 1464 Coca was under siege. In the battle of Olmedo (1467) Fernando de Fonseca, brother and successor of the bishop in the lordship of Coca, died.

The Fonsecas built the castle, a church, the Franciscan convent (important to see in Coca) and an alhóndiga to store the grains. They also founded a chair of Latin grammar, rhetoric and poetry.

In the 16th century, the cultivation of wine spread throughout the region. Literature such as Cervantes, Mateo Alemán, Tirso de Molina, Lope de Vega and Quevedo celebrated its quality.

In 1785 it was decided to demolish a large part of the town to air out the houses. This way they fought against the plague that affected its inhabitants.

In 1807 a Glass Factory was opened. However, only one year later General Milhaud’s troops settled there. They set fire to the municipal archives. When they left Coca in September 1812, they ruined the beautiful interior of the castle.

In 1861 the Resinera Segoviana company was founded by the Falcon brothers. They brought from the French town of Mont de Marsán a system for obtaining resin. The business prospered and today is the venue of an International Symposium of Natural Resins. It was as a result of this resin exploitation that the town’s demographic and economic explosion took place.

What to see in Coca

What you see at Coca is a more than interesting experience. The oldest vestige that can be visited in Coca are the three granite boars. Two are at the entrance of the village and one is embedded in the castle.

At the entrance of the town is the so-called Cruz de Septién (in Cardeñosa stone). It was left as a testament by Antonio de Septién to his city in 1620.

Of the two hundred metres of surviving walls, the Puerta de la Villa stands out. It has three flared arches framed by alfiz and half a dozen windows. On the north side it has a magnificent Calvary painted in wood from the 13th century. The wall was dismantled in 1785. Part of its stone was sold for use in El Puente Chico and another for the Glass Factory. This would be built twenty years later.

Through the Paseo de las Olmas or Avenida del Caudillo you can reach the impressive Castle. This is one of the infrastructures that you will see in Coca that will enrich your visit. It was started in 1463 by Alí Caro and his brothers Aceyte and Yuçafe.

It is composed of three defensive lines of square shape. They are formed by a large moat and two walls supported by towers and towers at their corners. It is a fascinating architecture to see in Coca.

The Homage Tower is square, with angles occupied in turn by smaller circular towers. It was built in brick. The stone was reserved for arrow slits, capitals, patio columns, door arches, balustrades and corbels. It has a back door with a drawbridge access.

Inside, there are two levels of sentry walk: arrow slits and artillery loopholes. The interior, despite the destruction suffered in the nineteenth century is typical of a palace. The room with a double chimney is the current museum or weapons room, which has another museum room with archaeological remains at the top. It also has the largest collection of Mudejar paintings in red, blue and black on stucco.

In the 17th century the castle was a prison for illustrious traitors to the king. Examples are the Duke of Medina-Sidonia, the Count of Orgaz and the Marquises of Govea and Mancera. In 1954 the Mayor, Arturo Acosta García, obtained from the Dukes of Alba the transfer of the castle to the Ministry of Agriculture.

The Ministry entrusted the restoration works until 1959 to the Academies of San Fernando and of History. Then the School of Forestry Foremen was installed there and is still in operation.

Along Lorenzo Castillo Street you will reach the Hospital de la Merced (15th century), which was intended for pilgrims on the Camino de Santiago route that crossed the centre of the peninsula. It was demolished at the beginning of the 20th century to build the current one, which was inaugurated in 1907. It functioned until the end of the century as a medical dispensary and is now in rehabilitation for health use. 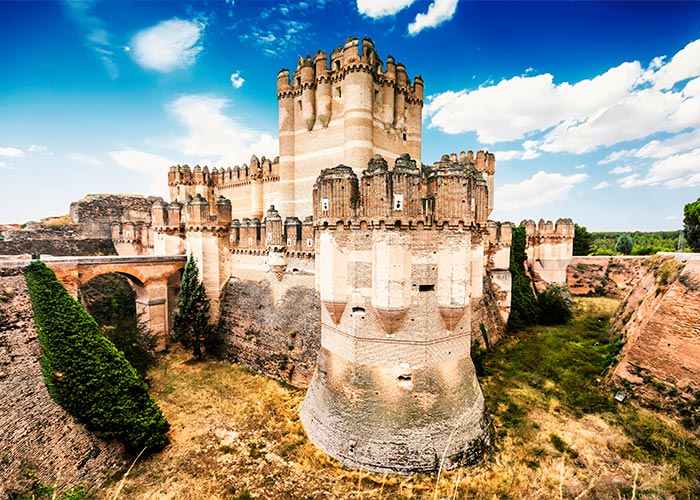 In the Plaza Mayor is the Church of Santa Maria, a must on this route about what to see in Coca. It is the only one that survives of the eight that existed and is documented since 1247. Through the parish archives its trajectory is followed since 1442.

In 1460, the lord of the town, Archbishop Alonso de Fonseca, founded a chapel there with twelve chaplains. This gives an idea of its importance.

A few years later, Pedro Fernández de Solís, a native of the town, added another chapel to it. At the end of the 15th century its state of deterioration made it advisable to demolish it. It was rebuilt between 1503 and 1520. In 1711 the stained glass windows were rebuilt. In the last third of the 18th century, the main altarpiece was replaced by others made by Sebastián de las Llaneras.

In addition, the church houses several elements that can be seen in Coca. The Santo Cristo de San Nicolás (Romanesque carving in transition to Gothic) and the Calvario (a group of sculptures by a disciple of Berruguete). Also Santa Ana, from the 15th century.

In the choir of the church a blue velvet cloak with gold fleur-de-lis is preserved. It belonged to King Charles VIII of France. In 1494, in Belite (Italy), it was used to protect Antonio de Fonseca from his knights. Therefore, it would be a special point to see in Coca.

It happened when the latter – as ambassador of the Catholic Kings – urged him to desist from the war with the Pope by defiantly tearing up the signed capitulations between the two kingdoms. A gesture of nobility that is remembered in this way.

The most important works of art to see in Coca de la Iglesia are the mausoleums of the Fonseca family. They were made in Genoa around 1520. On the side of the Gospel of the high altar is that of the Archbishop of Seville, Don Alonso de Fonseca. On the side of the Epistle his nephew don Juan Rodríguez de Fonseca, bishop of Burgos.

Upper part of the city

The rest of the monuments to be seen in Coca are in the upper part of the city, on the banks of the Eresma. In the Plaza de la Santa Cruz was the Church of San Nicolás (1247). Only its masonry and brick tower, typically Mudejar, survives from it. Its square tower has five rows of blind arches at its base. At the top there are four rows of arches.

Two other points of interest to see in Coca are the Roman Cloaca and the Fonseca Cultural Centre. Nowadays it is a public library, a deposit of archaeological material and an exhibition hall.

Castile and León, castles, churches, Roman sites, Segovia
It may interest you...