The splendour of a small Castilian town

The town which was the scene of the shortest royal marriage in history, gathers an impressive number of buildings of Mudejar style and a beautiful castle – palace. A magnificent setting for the oldest bullfights in Spain.

Plan your stay in Cuellar

There is much to see in Cuellar. This walled town has an excellent castle, a center of interpretation of the Mudejar art, and important churches and other buildings. It is possible to use a whole day in this locality. The rest of the getaway can be invested in nearby Coca and Iscar, whose fortresses rival in beauty with that of Cuellar. To those who go or return by the national road 601 we recommend to stop an hour in the interesting Roman Villa of Almenara-Puras.

There are no Roman and Visigothic vestiges in the village. There is also no news of the conquest by the Arabs, which should have been around 714.

It was reconquered a few decades later by King Alfonso I of Oviedo, who retired northward with the population of Soria, Segovia and Burgos. He left behind the so-called “Duero Desert”. There must have been a first repopulation after the battle of Simancas in 939, that would be displaced when the caudillo Almanzor destroyed Cuéllar in 977.

After the conquest of Toledo in 1085 the area was pacified. It facilitated a new repopulation, possibly led by Count Pedro Ansúrez, who was his Lord. It must have been very successful because in the year 1093 it was a popular municipality that would send its militias to support the Andalusian campaigns of the Castilian Monarchs.

King Alfonso X granted Cuéllar the Fuero Real in 1256 with a series of privileges that he increased with others in 1264. Maria de Molina, Queen Consort of Sancho IV of Castile, celebrated Cortes in the Villa in 1297.

In April 1354, after having forced the cancellation of his marriage with Blanca de Borbon, King Peter I of Castile married in the Church of San Martín with the widow Doña Juana de Castro.

he wedding feast was held in the palace of the Velázquez family of Cuellar (now called Pedro I’s palace); But the day after the link a messenger with alarming news about the brother of Maria de Padilla (the king’s lover) appeared. This motivated the king’s march, never to return with his wife.

Queen Juana would never give up the title living between Castrojeriz and Dueñas. In 1383 Queen Leonor, wife of John I of Castile, died in Cuéllar.

In 1429 the cleric and jurist cuellarano Gómez González, advisor of several Popes, founded a Grammar Study and the Hospital of the Magdalena. 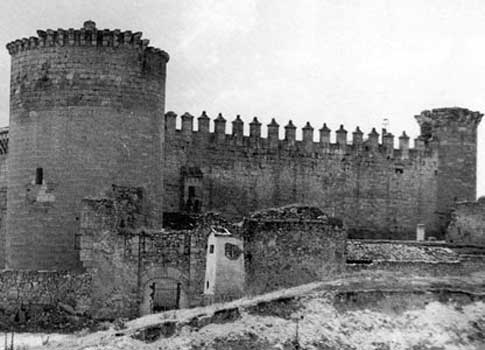 Castle of the dukes of Albuquerque

In 1444 King John II gave the Señorío de Cuéllar to his Valido Don Álvaro de Luna. In 1453, when its Lord was executed, it was disputed by several kings, infantes and nobles. Later, Henry IV ceded the town and the castle in 1464 to the Duke of Alburquerque, Beltrán de la Cueva. Him and his descendants would reform the castle, giving it a palatial character with the passage of the years.

It was occupied by the French during the War of Independence, in which Juan Senovilla Recellado from Cuéllar stood out. The French would loot the castle and the temples. The Grammar Study, which had been in operation for almost four centuries, was closed and the welfare work was ruined. New crops such as potato and chicory were introduced, and the exploitation of resinous pines began.

In 1931 one of the Pedagogical Missions launched by the Republic visited the town and the poet Luis Cernuda was explaining to the children of Cuéllar the painting of Murillo. In 1936 the castle of Cuéllar is used like prison.

What to see in Cuéllar

The visit to Cuéllar can begin in the Castle, of Gothic and Renaissance styles, in whose side is the Tourist Office. Here you can get a map to be able to locate better the enormous amount of monuments of the town.

The oldest part of Cuéllar

The oldest part of the fortress may be from the 12th century. Of rectangular plan, it has four turrets in the corners. The beautiful interior courtyard is of Renaissance style. Its columns support a double archway of recessed arches, with lounges decorated with coffered ceilings and carved beams.

Every festive day you can participate in the theatrical visits. From the castle come the two canvases of the great wall of Cuéllar, one of the best preserved of Castile.

A church with interesting stories

Next to the esplanade of the castle is the Church of San Martín, in Romanesque-Mudejar style. It has three naves and three apses covered with bóvedas of furnace on a base of masonry. The main apse is adorned with blind archways of half a point. Mudejar mural painting and the original polychrome plasterwork are preserved.

There King Peter I married Doña Juana de Castro, whom he abandoned the following day. This national monument is currently the Mudéjar Interpretation Center.

From there, along the street of La Rogativa you can reach the extraordinary Church of San Andrés, built in 1277 in Romanesque Mudejar style. Its main main portal has five rows of brick with two blind arcades of point that arrive at the eaves.

The lateral facades are covered by blind arcades of half-knobs and a top frieze of blind arches. It has three brick apses, the longest central with two half-point blind arches. Exceptionally, you can enjoy its original mural, geometric motifs in shades of red and black.

The Baroque altarpiece (17th century) has a carving of San Andres and several paintings. To highlight its Gothic image of the Virgin of the Rochela and the Calvary of the Christ of the Encina, of Byzantine style (dated towards 1300).

Cuéllar: the place where the possibilities are endless

On the street of Estudio you reach the Church of San Esteban, Romanesque-Mudejar of the XII century, attached to the wall. It has three ships with a polygonal Mudejar apse. It owns a Renaissance altarpiece of 1546 whose tables represent scenes of the life of the Virgin and of saints.

Opposite is the so-called Pedro I Palace, a large building where the king’s wedding banquet was held. It has a cover of stone carved in Romanesque style; In its interior they emphasize the coffered ones of policromada wood in Mudejar style; Is now a business incubator and cultural space.

In the Square of the Studio is the Medieval Archaeological Park, with thirty anthropomorphic tombs excavated on land, five food silos, medieval stacks for dyes and a snow pit (used for preserving food and medicines). There is also the Grammar Study founded in 1424, with the coat of arms of the founder and the Alburquerque.

Behind the Studio is the Judería Gate. In the nearby Plaza de San Gil the old Barn of Don Agustín Daza (1626) was destined to provide with seed to the poor farmers.

Next to this house is the facade of the old Hospital de la Cruz; With a large headstone on the lintel of the door that explains that founded also by Daza (Secretary or minister of the king Felipe IV). 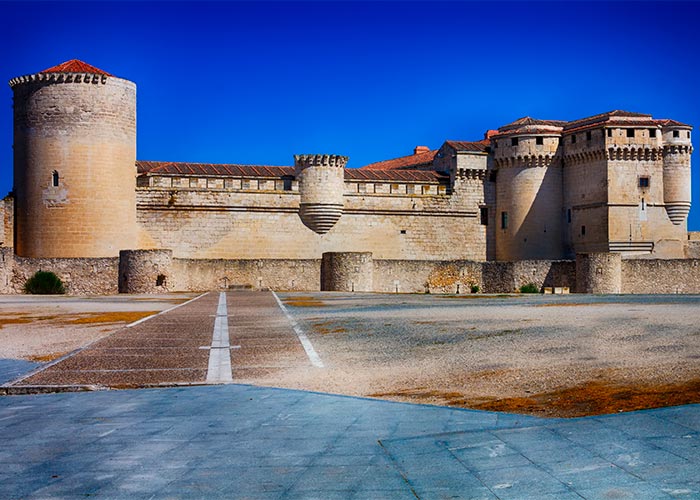 Castle of the Dukes of Albuquerque

Leaving the Puerta de San Martín you will arrive by the Duque de Alburquerque street to the Panera and Casa del Duque, built at the end of the 18th century to store grain. Being also second home of the Dukes or their relatives. Below are the ruins of the Mudejar Church of Santiago, of which remains the tower, the apse and a side nave.

The City Hall has a Gothic-Renaissance courtyard that now houses temporary exhibitions. In the Town Hall Square there are numerous houses with facades in which the wooden framework is seen; Characteristics of the village.

There is the archpriest church of San Miguel, Gothic with elements Romanesque-Mudejar and Renaissance. Towards 1395 the first tower clock of Spain was placed in this church. In the interior they emphasize the picture of Lucas Jordan of the Virgin, San Joaquin and Santa Ana, a Christ tied to the column of the sixteenth century and a Christ Yacente of the school of Gregorio Fernandez.

Near San Miguel is the House of the Bazanes or Palace of Santa Cruz, building of three plants built in brick in century XVII. It has a wooden balcony on the wall.

Going down from the Plaza along Calle Santa Marina is the House of the Daza, with the shields of that family. Further down is the Torre de Santa Marina, the only remnant of the 13th-century Mudejar church.

Its lower part is of masonry and the upper one of brick, with two heights in which they appear double brick arches blinded in each one of the four faces of the tower. And finally, behind the Gate of the Trinity, there is the church and Old Convent of the Trinity of the neighborhood of the same name.

Going up Los Hornos Street is the Casa de los Rojas, also known as the “Casa de las Bolas” (16th century) with sgraffito on the façade of its upper floor; Currently it is judicial seat.

On Calle de las Parras, a shopping street and nerve center of the Encierros, you can reach the Church of San Pedro (before 1095, the oldest in the town), which was a Romanesque temple that was part of the outer wall. Has the apse with a semicircular corridor sprinkled with matacanes and saeteras with the shield of the first dukes of Alburquerque. The North and South covers are Romanesque and in its interior are preserved Gothic vaults.

Opposite, in the street of San Pedro is the House of the Velázquez del Puerco, which is distinguished by its pointed arch and the shields. Going up to the Avenue of the Bulls we find the ruins of the Convent of San Francisco, from the sixteenth century and late Gothic style.

The sacristy has been restored for showroom and some side chapels for Interpretation Center of the bull runs. The bull runs of Cuellar are considered the oldest of Spain, since 1215. They are celebrated the last Saturday of August; In the previous weekend a medieval fair is celebrated.

Going down Calvario Street is the Concepción Convent, and near the Church of Santo Tomé, with the Gothic image of Our Lady of the Rosary.

In the lower part of the city are the House of Velázquez and Ruiz de Herrera, the Church of Santa María de la Cuesta, Romanesque-Mudejar, forming also part of the exterior defenses with vestiges Romanesque Mudejar and restored tower, contains the baroque Retablo Of Descent.

Five kilometers away is the Sanctuary of Our Lady of Henar (1644) in which the community of Carmelite barefoot preserves the image of the Virgin (from 1430) in Byzantine style. It is in a beautiful recreational environment in which the source of the Cirio is found, to which miraculous properties were attributed.