The strategic town and Liébana's capital

The eastern-southern massif of the Picos de Europa serves as an impressive backdrop to this village. Capital of Liébana, it leads a region with a tradition of agriculture and livestock reoriented towards rural tourism. Nearby mountains and their authenticity have contributed to its holiday success.

Plan your stay in Potes

“The Village of the bridges and towers” stands out for its history and its gastronomy. The great landmarks to see in Potes are the Tower of the Infantado, the Church of San Vicente and its many bridges. A morning is enough to see them, although relaxing and experiencing their isolated atmosphere requires more days. Thus, the ideal is to go into the natural paradise of the Picos de Europa National Park. Another option is to head north and spend the day on the beaches and surroundings of San Vicente de la Barquera. Not far away lies the majestic Comillas. Finally, the charming provincial capital, Santander, is always a good alternative.

As for local cuisine, the Quesucos de Liébana shines brightly. In these pages about sleeping and eating in Potes you will find a great selection of restaurants and accommodations. Its mountainous location makes it very suitable for several active tourism plans in the province of Cantabria.

Before moving on to what to see in Potes the best thing is to know briefly its history. The region of Liébana is divided into four valleys: Valdebaró, Cereceda, Piedrasluengas and Cillorigo. These go to its smallest municipality, Potes. Most of its territory has therefore important slopes. There is only one flat strip, between the rivers Deva and its tributary Quiviesa.

Many cultures in Potes

Several remains are evidence that the territory was populated in prehistoric times. The Romans, Visigoths and Arabs also left their traces. After the Reconquest, the chronicle Alfonso III (c. 848-910), the last Asturian king and first of León, mentions the repopulation that took place in the eighth century. This took place in the time of Alfonso I of Asturias, with people from the plateau.

During the 9th century the name of Pautes appeared for the first time, which would later derive in Potes. The authority was shared between the Monastery of Santo Toribio de Liébana and the Crown. In the 10th century it became a regional administrative centre and soon began to stand out for its commercial activity. In connection with this, Sancho IV of Castile established, in 1291, some regulations that obliged those who attended the market to keep their weapons in the inn until they returned to their places of origin.

Once the 14th century was reached, the town was formed as a lordship of the Infante Don Tello, son of Alfonso XI of Castile and first Lord of Castañeda. However, the control of its fortress by the Lords of Castañeda was questioned by the powerful Mendoza family, who set fire to the fort in 1444. From then on it was the Mendoza family who dominated the region. Very protected by the Catholic Monarchs, they ended up receiving the duchy of Infantado.

The close association of the Mendoza family with the Crown led to the siege and assault of the Torre del Infantado in 1520 by the villagers led by Garcí González Orejón de la Lama. When Toribio was captured, Alonso de Mogrovejo, commander of the Royalists, was dragged to the battlements of the tower and thrown from there into the void. The loyalty of the Infantado to King Charles I was rewarded with the concession of the Greatness of Spain. Thus, the family would continue to dominate the province of Liébana from Potes. The reason was that the King’s corregidor was staying in his tower. 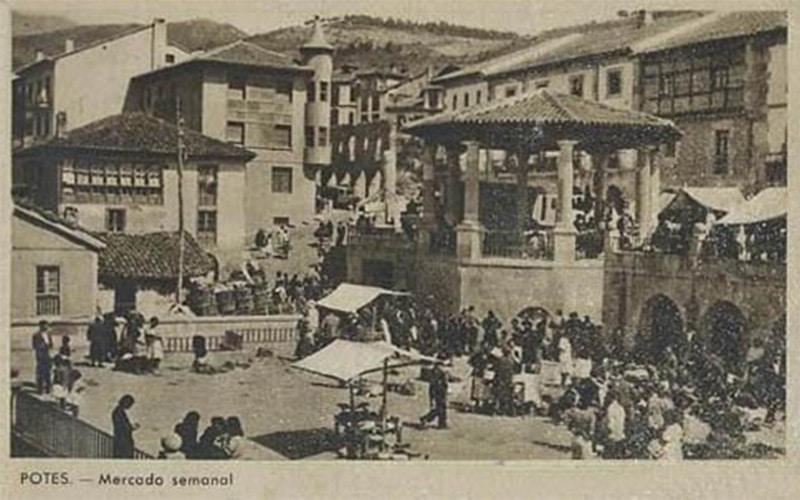 In 1808 Potes was the scene of hard fights between French and Lebanese guerrillas. The brave Cantabrians managed to repel the enemy up to sixteen times. The French general Mahy boasted of having managed to dominate them.

Around 1823, Mr. Manuel de Colmenares, from Liébana, armed and organized some 1,600 peasants to revolt against the government. The aim was to free Ferdinand VII from his constitutional obligations. These, called “realists”, went to the Torre del Infantado, the seat of the provincial authority. They executed a siege until the government soldiers surrendered them.

The importance of Potes

In 1868 the 15th Duke of Infantado sold his tower to a shoemaker, disassociating his family from this town. Meanwhile, at the end of the 19th century and beginning of the 20th, many locals emigrated to America. Those who succeeded built important buildings in the town on their return, in a style known as Indian architecture. In 1937, during the Civil War, Potes was affected by a fire that destroyed its historic centre. This would be rebuilt and is considered a Property of Cultural Interest, with the category of Historic Site.

What to see in Potes

The place is one of the most attractive in the community because of its historical character, its gastronomy, its particular traditions and its location in an incomparable natural setting. The streets you see in Potes are crossed by numerous bridges that cross the river Deva and its tributary the Quiviesa. Meanwhile, the San Cayetano Bridge and the Prison Bridge join the two parts of the Old Town. This is the heart of the old part of the town which, despite restoration, still retains its medieval appearance.

The first thing to see in Potes is the deconsecrated Church of San Vicente or the Old Church (14th-17th centuries), which currently houses an exhibition hall. Opposite it stands the new Church of San Vicente (19th century), of lesser artistic interest but with interesting Baroque altarpieces from the old convent of San Raimundo. Next to both, in a small garden, is the Monument to the violinist and composer Jesús de Monasterio, made by P. Estany in 1903. The house where the musician was born is also preserved, at the end of the street that bears his name.

The Infantado Tower is the current headquarters of the Town Hall. It is a tower-house built in the 15th century, with a square floor plan. It has few openings and is topped by four small angular towers ending in battlements. The tower was ordered to be built by the Lama family, and then passed on to Diego Hurtado de Mendoza. The construction was the scene of the violence described in the historical introduction, as well as the seat of the corregidor and the prison.

Heading west, through a portico, one arrives at the del Sol district. In this area the Orejón de la Lama Tower (15th century) was built, with a square floor plan, three heights and emblazoned with the arms of Bedoya and Celis. This building usually hosts exhibitions and other cultural events. There are also a number of manor houses in the neighbourhood. Among them shines the Casona de la Canal where the Cartographic Museum of Juan de la Cosa is located. The Cantabrian sailor and cartographer is known for having drawn the oldest map of the American continent. Crossing the San Cayetano bridge, you arrive at the La Solana neighbourhood, with simple houses of popular architecture in narrow cobbled streets.

On the other hand, the San Roque district has more landmarks to see in Potes, such as the San Raimundo Convent. It was founded in 1608 and still preserves the facade and the cloister. In turn, the districts of El Tullo and Fuente de la Riega still maintain that atmosphere of rural nobility that characterizes the town. 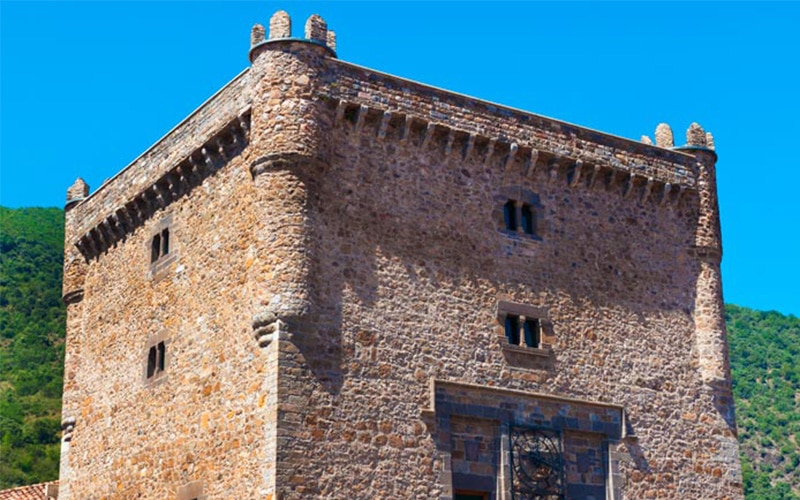 A market is held every Monday around the Jesús de Monasterio park. You can buy typical products from Liébana and the surrounding regions, such as cheese, orujo, chorizo or honey. On the other hand, the year in which the festivity of Santo Toribio (16 April) falls on a Sunday, the Lebaniego Jubilee Year is celebrated in the Monastery of Santo Toribio de Liébana (in Camaleño, 5 km from Potes). This is where the monastery of San Martín de Turieno used to be, where the monk who enlightened the famous Beato de Liébana (776) lived. Such a manuscript illustrates the Comments on the Apocalypse by St. John.

The Lignum Crucis, the largest surviving fragment of the Cross of Christ, is venerated in the monastery. It is the protagonist of a much celebrated feast in Liébana, that of “The Exaltation of the Cross”. It has taken place since time immemorial in the grounds near the monastery. The celebrations are accompanied in Potes by a contest of tortillas, descent of the river Diviesa, fireworks, verbena, etc.

During the month of November, for a weekend, the “Fiesta del Orujo” is celebrated. This is an alcoholic drink made from the skin, stems and seeds of the grape. In the small temple in the square, the alquitaras are lit and tastings are offered to all the people who attend the festival. In addition, the distinction of “Orujero Mayor” is awarded to an outstanding personality.

Other traditional events to see in Potes are the cattle fairs that appear documented since the 14th century. Currently, six livestock fairs are held in the Ferial de La Serna throughout the year. It lasts one day. This concludes the visit to the best thing to see in Potes, one of the most beautiful villages in Cantabria.

bridges, cantabria, churches, monasteries
It may interest you...