Around the spectacular gorge on the River Guadalevín, this historic city has a complete old town. Packed with monuments, its bullring, one of the most famous in the world, stands out.

Plan your stay in Ronda

This town in Málaga has enough charms to spend a full weekend there. The cobbled streets of the old town, the world famous Ronda bullring, its many palaces, or its Puente Nuevo are the great landmarks of the place. If you have more days, you can enjoy the beautiful postcard that the Natural Park of Sierra de las Nieves offers. You can also opt for the charming Casarabonela. On the other hand, Málaga city is always an alternative if you have not visited it before.

Ronda’s long past deserves to be known before moving on to what to see in Ronda. Human presence has been confirmed since the Paleolithic, as the site of the Cueva de la Pileta shows. The Dolmen del Chopo belongs to the Neolithic period. Later, in the 6th century B.C., its inhabitants called it Arunda. Scenario of the Second Punic War, the territory was developed at the end of the Republican period and the beginning of the Imperial one. Under the rule of Rome, the neighbouring town of Acinipo, previously inhabited by the Phoenicians, also stood out.

The beginning of the Moorish domination

When the 5th century arrived, it was taken over by the Swabians and later by the famous Visigothic Leovigild. The Germanic domination would end by means of a surrender agreed before the Muslims in 713. These would call it Izn-Rand Onda or “The city of the castle”. From 880 it was part of the rebel territory created by Omar Ben Hafsun. The Muladi ruled the area until well into the 10th century from the Bobastro fortress in nearby Ardales.

In order to better control this territory, which had escaped its control for almost half a century, Córdoba established the Cora de Takurunna, giving the city the status of capital. The accumulation of power in the locality made it possible for the Taifa de Ronda to be created later. This happened in 1015 being an initiative of the local leader Abu Nur. The independence only lasted until 1059, when it was absorbed by the Taifa of Seville.

The Marquis of Cádiz

In May 1485, after a siege and bombing, it was taken by the Marquis of Cádiz. Later, in 1572, the Real Maestranza de Caballería de Ronda was created. Here the nobles could practice the art of horsemanship. On the other hand, the 16th century would be the time of great constructive activity, revived in the 18th century. 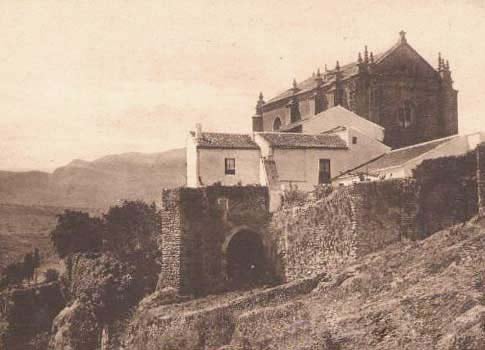 The Church of El Espíritu Santo, next to the wall, in an old photograph

During the War of Independence, the French caused serious damage to the city. They also endured intense guerrilla action. The latter, from the end of the war, were dedicated to banditry. One of the most famous was José María Hinojosa, known as El Tempranillo. For the romantic European travellers who visited Ronda, the figure of the bandits remained intimately linked to the city. For this reason it has become a typical literary figure in the travel books of the time.

Ronda, the cradle of Andalusianism

At the Assembly of Ronda in 1918 the first great meeting of Andalusian nationalist politicians was held. In this way, the identity elements of Andalusia were chosen, such as the anthem and the flag. Because of this, Ronda is considered to be the cradle of Andalusianism. A good example of this is the Mirador Blas Infante. Be that as it may, due to its heritage and history, today the place is a busy tourist centre.

What to see in Ronda

A mix of buildings from different cultures

The visit to the place starts at the Puente Nuevo de Ronda, 93 metres above the river Tajo (1793). Its historical importance is the reason why it has its own visitor’s centre. To the south, already in the old town, it resists the Arab Wall from the 13th and 16th centuries. Among the most notable entrances is the Puerta de Felipe V (1742). Puerta de Cíjara and the Puerta de Almocábar are also worth a look.

The nearby Convent of Santo Domingo (16th century) was the seat of the Inquisition. The doorway, its coats of arms and what remains of the cloister stand out. Nearby there is another landmark to see in Ronda, the Palace of El Rey Moro, from the 18th century. It is a complex building with two towers that includes a mine that the Arabs built to capture the water. It also has some unique gardens arranged in terraces.

The Arab Baths of Ronda (13th-14th centuries) still have their hot, cold and temperate rooms. From the Palace of the Marquis of Salvatierra stands out its baroque front (18th century) made of ashlar stone. Very close by is a beautiful minaret that ended up being the bell tower of the now disappeared Church of San Sebastián. The Casa del Gigante surprises with its rarity and beauty. This palace from the Nasrid era, from the 14th and 15th centuries, preserves the patio and plasterwork. 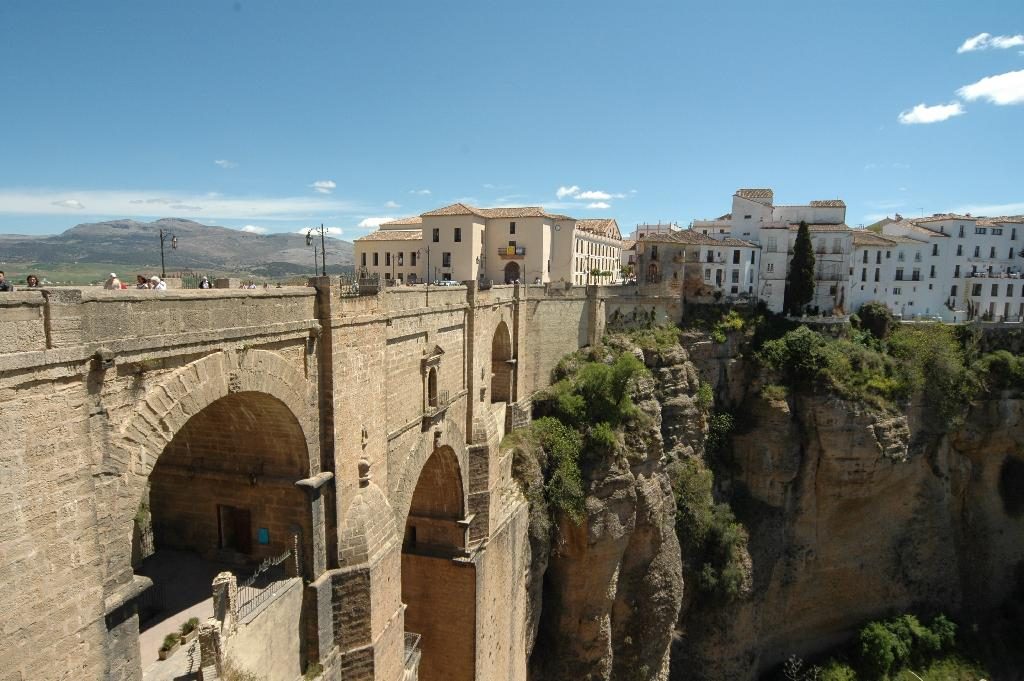 The Casa de Juan Bosco (20th century) is located in the heart of the town. This building has beautiful gardens and a collection of ceramics, tapestries and period furniture. For its part, the Baroque Church of Padre Jesús (16th century) is famous for housing the image of the Nazarene, which is carried in a procession during Holy Week. The Fuente de los Ocho Caños is located nearby.

An important element to see in Ronda is the Church of Santa María La Mayor. It was built over a paleochristian basilica (5th century) and was later replaced by a mosque. The current building was started to be built in gothic style at the end of the 15th century, extending the works until the 17th century. It has a spectacular Renaissance choir and a beautiful altarpiece of the Virgen del Mayor Dolor. In the next Armiñán Street is the entertaining Bandit Museum. This place shows a historical view of these criminals whose vision is so tied to this Malaga town.

The city of palaces and churches

Further on, the Palacio de los Marqueses de Moctezuma belonged to the heirs of the disgraced Aztec emperor. An spectacular Mudéjar room in this building that you can see in Ronda was renovated and today houses the Joaquín Peinado Museum. The local painter was a member of the Parisian avant-garde.

The most prestigious local dwelling was the Palace of Mondragón (16th and 18th centuries), also known as the Palace of the Marquises of Villasierra. Its Gothic patio or the Mudejar coffered ceiling of the main hall are worth a look. The fact that the building houses the Municipal Museum means that its interiors can be enjoyed.

Continuing with what we see in Ronda, we arrive at the Church of El Espíritu Santo (1605). Its exterior is notable for its triangular pediment and the presence of two buttresses. Meanwhile, on the inside the high altar and the image of its recumbent Christ stand out. In the Church of Santa Cecilia, on the other hand, there is a beautiful façade and two notable altarpieces: that of San Antonio (18th century) and that of the Trinity (19th century). 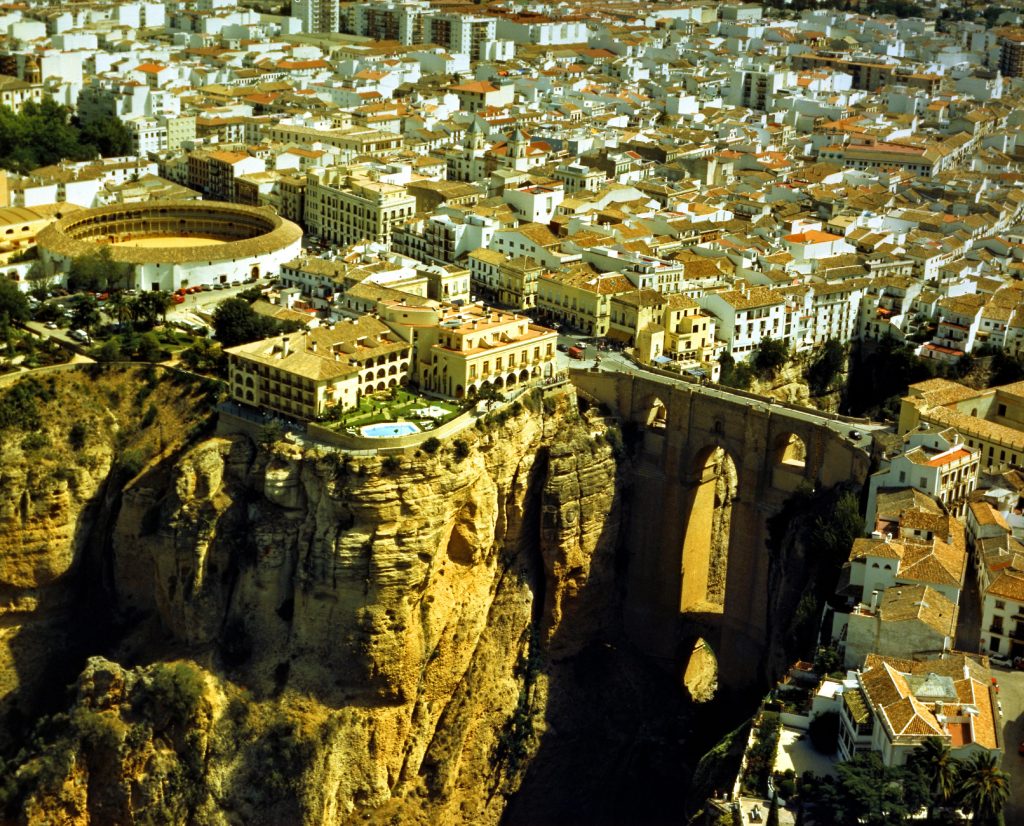 The visit goes on to the Tagus River. As well as leaving excellent views, its surroundings are home to the Caves of San Antón. In these caves, the Hermitage of La Virgen de la Cabeza was created (9th-10th centuries). You can also see old houses and storage areas of the Mozarabs. Attached to the complex, a baroque church guards the image of the Virgin.

Crossing the Tagus, we reach the Town Hall (1734), formerly a militia barracks. Its beautiful front stands out, with arches, as well as the coffered ceiling of the Plenary Hall. Nearby there is another element to be seen in Ronda, the Temple of La Virgen de los Dolores (18th century). This small chapel keeps a canvas of the titular.

Bullfighting and Goya in Ronda

The Bullring of Ronda (1785) is one of the most beautiful that exist, framed by the 19th century Alameda del Tajo. Pedro Romero, a member of a large bullfighting dynasty, was born here and was portrayed by Goya. The matador obtained without any damage the stabbing of more than five thousand cattle during the 18th century. Since 1954 the Málaga locality has been holding a famous Goya bullfight.

The Museo Taurino, which includes the Real Maestranza de Caballería de Ronda, complements the Plaza de Toros de Ronda. And the visitor can continue to enter the world of the brave bulls in the Dehesa Don Bosco, which has the Bullfighting Visitor’s Centre. 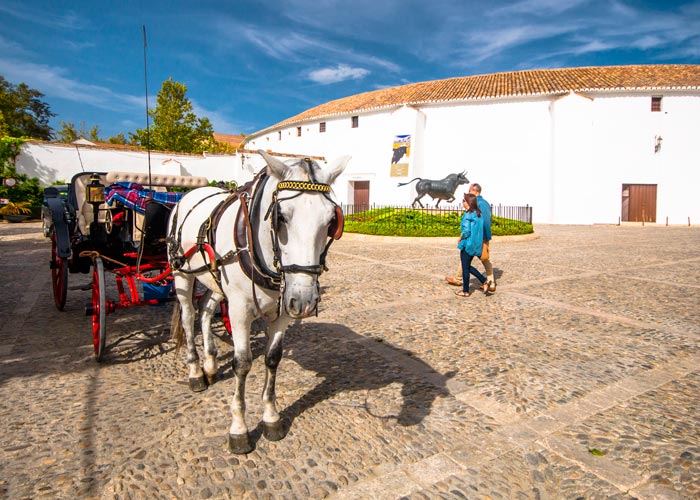 To close the tour of what to see in Ronda, we must pay attention to its sites. The Cave of La Pileta, with cave paintings from the Palaeolithic age, like the famous “Pregnant Mare”, is the main one. In La Algaba it is now a real science park. Finally, towards the outskirts are the visitable vestiges of the ancient Roman city of Acinipo.