The most selective area of Madrid

Retiro Park, the lungs and heart of the city, is one of the places frequented by locals. Next to it is the Salamanca district, elegant area that still retains its original bourgeois taste. It is known as the best shopping area in all of Spain.

Plan your visit to Barrio de Salamanca and El Retiro

The area of ​​Retiro and Barrio Salamanca is the most pleasant and luxurious in the city. Here are the best international stores, and specialized trade (hairdressers, jewelers, furriers, tailors, cobblers, decorators, florists …) so it is common to see street travelers from around the world . There are also many of the best restaurants and hotels, as well as the major auction houses and antique shops.

When Philip II established his court in Madrid in 1561, the grounds of the current Retiro Park were just land and small forests. Near the Church of St. Jerome was a place for the removal of kings Philip II expanded with new galleries, towers and gardens and isolated from the outside with moats. In 1630 the Count-Duke of Olivares, favorite of Philip IV, founded here requisites of sovereigns, a vast palace surrounded by gardens, ponds, lakes, canals, menagerie, and a coliseum, was the Palacio del Buen Retiro. The palace complex took about two hundred hectares, from the Puerta de Alcalá to the monastery of Atocha.

In the eighteenth century the Bourbons added new buildings: Factory China (1759) and the Astronomical Observatory (1790-1808). In the War of Independence, the royal palace became a defensive stronghold and was destroyed in 1812. Currently only preserved the palace the Hall Kingdoms (former Army Museum), the Cason del Buen Retiro (today Studies Center Museo del Prado) and an ancient tree that is still preserved in the parterre. In the following years they were generating the surrounding neighborhoods, like Alfonso XII, in some areas of the park.

The former royal possession was nationalized during the revolutionary six years (1868) and called Parque de Madrid. In 1874 a ride car that shrank the garden areas and caused the felling of more trees opened. Since then he has remained intact dimensions. In those gardens, in 1833, the historical procession of Maria Christina of the Two Sicilies held by Sergeant Agustin Fernando Muñoz Sanchez, who so much attention in coming years. 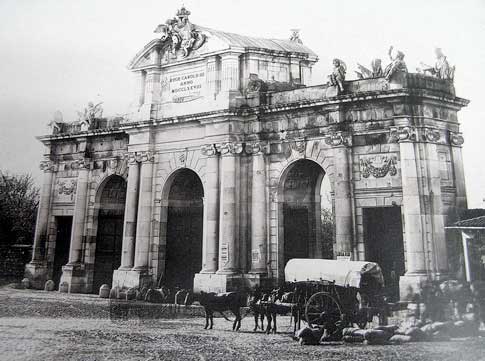 In the last third of the nineteenth century the population of Madrid was around half a million inhabitants, population size which necessitated the expansion of the city. One of the most famous neighborhoods emerged then was that of Salamanca, whose construction lasted between 1863 and 1931. The neighborhood is characterized by regular layout of its streets, squares and buildings, and its breadth, unlike the old downtown neighborhoods from the city. The initial phase of building occurred around the Serrano street, where the entrepreneur Marquis de Salamanca acquired land and built luxury homes, they had the first toilets of Madrid, the latest in plumbing and water heaters for bathrooms and kitchens . But it was after his death in 1883, when the neighborhood started to become one of the most elegant areas of Madrid.

The original buildings still standing are characterized by following the model of closed block that Castro had devised in 1857, although without the landscaped courtyard that was originally planned, following the typical bourgeois and noble Madrid architecture models of the Restoration. For quite some time, the streets of Serrano, Velázquez, Goya and Conde de Penalver have become one of the busiest commercial areas of the city, mainly oriented to luxury products and latest fashion.

What to see in Salamanca-Retiro

Our tour begins in Madrid near the Atocha station and the National Museum of Anthropology. Before heading to the Retiro Park, you should make a brief stop at the Basilica of Atocha and the Pantheon of Illustrious Men, two places that are not usually found in the tours of Madrid. The Basilica of Our Lady of Atocha is one of the five basilicas of the capital and a place of worship of kings, for his virgin attends the Royal Family to be presented to the princes and infants, forty days after delivery. It is a curious neo-Byzantine building with free belfry and its construction in the late nineteenth century, it comes from an order of the Queen Regent Maria Cristina architect Fernando Arbós, the same architect who built the annex Pantheon of Illustrious Men, inspired by the Campanile Florence. The Pantheon, with neo-Renaissance and neo-Byzantine styles, is home to seven major funerary monuments, made by different sculptors. At present, only it remains buried here José Canalejas, but before shared pantheon with figures like Eduardo Dato, Canovas del Castillo or Praxedes Mateo Sagasta, among others. This is one of the most atypical, solitary and beautiful corners of Madrid. Up the street Alfonso XII to the Retiro Park can be seen on the Cerrillo de San Blas, the most representative of Spanish neoclassicism work in Madrid: the Astronomical Observatory, designed by the architect Juan de Villanueva and completed in 1845 by Pascual and Colomer. It is a cube-shaped building, topped by four small towers and a circular of 16 granite Ionic columns roundabout. The rotunda, conservatory today, was designed open in the original project and, inside, houses a collection of astronomical instruments.

Retiro Park is a jewel of artistic and natural heritage of Madrid. We could spend the whole day on it, crossing it, enjoying art and nature or just resting and even paying homage to the victims of the attack of March 11, 2004 in the emotional Forest of Remembrance. The main reference in the park is the Monument to Alfonso XII, located on the site where the old pier was during the time of Philip IV. It consists of a large colonnade surrounding the equestrian statue of the monarch and decorated with numerous allegories, made by the leading sculptors of the moment: Mariano Benlliure, Aniceto Marinas or Inurria Mateo. Another interesting space is the Parterre, opposite the Cason del Buen Retiro, French-style garden during the time of Isabel II where a bald cypress, the oldest tree in Madrid, defies the passing years. Other architectures scattered around the park are the Casa de Vacas (1874), the Palacio de Velázquez (1884) -proyectado by Ricardo Velazquez Bosco and Daniel Zuloaga ceramic decoration and the Crystal Palace (1887), next to the pond. The latter building, a greenhouse work also Ricardo Velazquez, was raised on the occasion of the Exhibition of the Philippine Islands and served to show the plants and flowers of the archipelago. Currently it serves as a stage for exhibitions Reina Sofia Museum as one of their headquarters along with the aforementioned Palacio de Velázquez ..

The Monument to the Fallen Angel (1877), of Ricardo Bellver it is said that it is the only monument dedicated to Lucifer in the world where it is represented at the moment he is expelled from Paradise is not lost. Most disturbing is that rises to 666 meters above sea level (the number 666 is associated with the Antichrist). 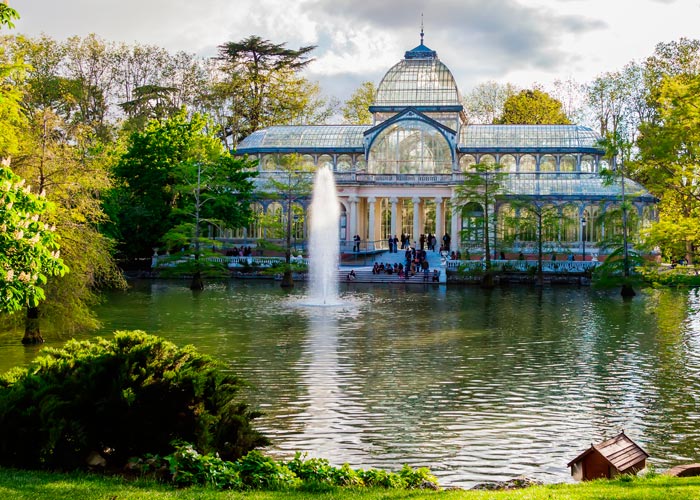 Next to Retiro rises majestically Alcalá Gate, symbol of Madrid. This triumphal gate was long the main entrance to the city, along the road of Alcala de Henares. Its origin dates back to 1599, although the current is 1764, commissioned by Carlos III the celebrated architect Francisco Sabatini, head of the Royal Palace. Twice a year, in autumn and spring, the gazebo cars are replaced by row shepherds of their flocks who claim their status as former royal glen, moving from summer pastures to winter and vice versa.

From the Independence Square we can enter the heart of the Salamanca district, Calle Serrano, Madrid boulevard par excellence, full of mansions and luxury shops. At number 13 is the National Archaeological Museum. Its magnificent collection includes Roman mosaics brought from Spanish villas, Arabic and Moorish craftsmanship, architectural and sculptural examples of Romanesque and Gothic and key in the history of Spain as the Lady of Elche pieces. Sharing building, although facing the Paseo de Recoletos, the National Library is a monumental building that houses over five million books, incunabula, manuscripts and prints. Built between 1866 and 1875, its doors are under triple arcade midpoint and end of a staircase dominated by the image of several Spanish wise. The reading rooms are reserved for researchers, but on the ground floor there is access to the Book Museum or Museum of the National Library, which is essential for bibliophiles visit.

Next to it is the Plaza de Colón, with the Gardens of Discovery, where stands the monument to Christopher Columbus (1881-1885), Arthur Mélida and Jeronimo Suñol, the most recent Monument to the Discovery (1977), Joaquin Vaquero Turcios and a huge Spanish flag waving in the wind. Under the monumental square is the Teatro Fernan Gomez.

The most important thing to do in the Barrio de Salamanca are its extraordinary shops. Many of the best are on the street Serrano, why it is very advisable to walk to get to the mall in the former ABC Serrano Building, built in 1926 for the newspaper of the same name. In the street, a little further on is the Museum of the Lázaro Galdiano Foundation. Here is a “collection of collections”, composed of 13,000 art objects (from painting and sculpture to decorative arts and jewelry), which was owned by collector and patron editor José Lázaro Galdiano (1862-1947).

Our cultural tour of the Salamanca district can continue for the Carlos de Amberes Foundation, installed in the building of the church of San Andres de los Flamencos (1876) at number 99 Calle Claudio Coello, culminating with a visit to the Juan March Foundation in Castelló street, which in its nearly sixty years of history has always magnificent scheduled exhibitions and concerts.

Then we can delight in the international glamor of the shops on Calle Jose Ortega y Gasset, enjoy the neogothic and modernist religious architecture of the Church of the Immaculate Conception (1902-1914), in Goya street or just appreciate the luxurious architecture the Spanish restoration.

If you are fond of the party you must get close to the Plaza de Toros de Las Ventas (1922-1934), the “cathedral of bullfighting”, located in Alcala Street. The square was designed by José Espeliú in Moorish style. It is built in brick with large arches decorated with multicolored plates horseshoe in which the shields of the provinces of Spain are represented. It is the country’s largest and the world’s third largest and also has a Bullfighting Museum, inaugurated in 1951. It is possible to make guided visits Square throughout the year.