Manor of the Cid and a Mozarabic wonder

This village of the “Desert of the Duero” began as a lordship of the Cid Campeador, after several infants of Castile, until the Tovar and Frías enlarged it in the XV and XVI centuries with the imposing buildings that can be visited today. Nearby is the extraordinary Mozarabic chapel of San Baudelio.

The visit of the collegiate church and other places to see in Berlanga de Duero can occupy us for a full day; Be aware that there is a long climb to see the castle and enjoy its views; In addition, it is necessary to have to travel the 8 kilometers towards the southeast by the road So-152 until Casillas de Berlanga, whose vicinity is the extraordinary Hermitage of San Baudelio. The following day, in the west direction, the trip can be completed by visiting the medieval Burgo de Osma and San Esteban de Gormaz. Those who return to Madrid or Zaragoza can make a half-day stop to visit the interesting Almazán; After seeing the walled enclosure do not stop to cross its zone of the river.

It was called Valerian Augusta by the Romans in memory of Thracian emperor Valerius, name that stayed until Century XII.
During the Reconquest was several centuries in border area, changing hands several times and remaining unpopulated. In 989 was taken by the caudillo Almanzor to the Christians. It was besieged in 1060 by the king Ferdinand I, who would find it empty when being evacuated furtively by its inhabitants. In 1087 King Alfonso VI handed it to him for inheritance interest to the knight known as El Cid shortly after. There are those who place near the Berlanga oak of Corpes where the daughters of the Cid were affronted by the infants of Carrión.

Again in the power of the Castilian crown, in 1109 the king Alfonso I of Aragon, when marrying with the queen Urraca of Castile and  attempting to reach the power in the kingdom, proceeded to repopulate Berlanga, Almazán and Soria, in order to secure the border with the Muslims. By then the Jews would settle in the so-called Yuberia neighborhood, with a hundred families coming together. In 1130 it is his Lord the knight Fortun Azénarez, happened in the señorío by several infants of Castile, until the infant Don Tello -Lord of Vizcaya- is given to his daughter Elvira Téllez de Castilla, married to Fernando Sánchez de Tovar. His descendant, Dona Maria de Tovar, married Íñigo Fernández de Velasco in 1482, passing Berlanga to form part of the Duchy of Frías. The marriage resided much in the town, adapting its castle and building its impressive colegiata (that cost the astronomical figure of 30,000 ducats); As well as the palace, impressive gardens, a hospital and a monastery; Also adapted the castle to withstand artillery attacks

Once the Duke Don Iñigo died, his services were thanked by Emperor Charles, creating in 1529 Marquesado de Berlanga for his son Juan. At that time, the future friar Tomás de Berlanga was born and lived there in Berlanga. After his missions in America and his work of pacification between the conquistadors Almagro and Pizarro and after participating in the discovery of the Galapagos Islands, returned to Berlanga in 1541. He did it in company of the famous lizard of the river Chagres that during his master behaved Well but that soon became the terror of the girls of the town. The friar was buried in 1551 in the chapel of the Christs of the Collegiate; His lizard, dissected, accompanies him from a main wall of the same temple. 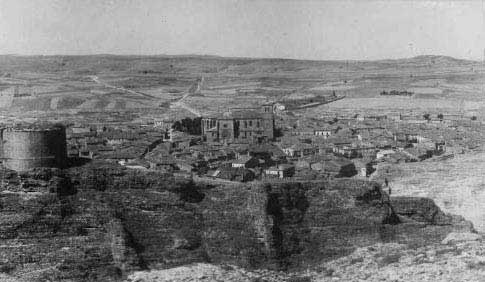 On April 20, 1660 King Philip IV was received with artillery shots; Some of which were loaded with projectiles, impacting on the castle and causing a fire in it. Until 1810 it is one of the bases from which the patriots attack the French that guarnecían Soria; These would end up taking the town and razing the great palace of the Marquises, its spectacular Renaissance gardens, and other buildings. The International Center for School Culture installed its headquarters in this town; For that reason it is a reference in the investigation on the school and its history.

What to see in Berlanga de Duero

The visit of the collegiate church and other places to see in Berlanga de Duero can occupy us for a full day; Be aware that there is a long climb to see the castle and enjoy its views; In addition, it is necessary to have to travel the 8 kilometers towards the southeast by the road So-152 until Casillas de Berlanga, whose vicinity is the extraordinary Hermitage of San Baudelio. The following day, in the west direction, the trip can be completed by visiting the medieval Burgo de Osma and San Esteban de Gormaz. Those who return to Madrid or Zaragoza can make a half-day stop to visit the interesting Almazán; After seeing the walled enclosure do not stop to cross its zone of the river.

We begin the visit of Berlanga to the Castle of Tovar, located at the top of the hill. It can be accessed through the door of the Row that formed part of the impressive wall of the XV century that surrounds the hill where the castle is, as well as the palace of the marquesses of Berlanga and its gardens. At the bottom of the Castle first we find the great Renaissance facade of which was Palace of the Marquesses of Berlanga de Duero (XVI century); Devastated by the French in 1810, as well as its extraordinary gardens.

Then you can climb the great slope to the castle, rebuilt in the fifteenth century by the knight Luis de Tovar, Lord of Berlanga. His son-in-law, Iñigo Fernández de Velasco, ordered the Italian architect Maestre Benedicto to build a second wall around the castle in 1520 to resist siege by artillery, raising four large circular turrets, lower and thicker than the At his feet. The castle suffered a fire in 1660, during the visit of Philip IV, and would also be looted by the French in 1810; The courtyard of the 15th century homage with battlements and garitones, as well as the sixteenth-century walls, are still standing; The one who is encouraged to climb the high hill will enjoy its splendid views.

Back in the plain, the gates of Aguilera and the Market remain of the primitive wall of the fourteenth century. Near the Gate of Aguilera is the Picota or Roll of Gothic style, built by Duque Iñigo to remember his jurisdiction over Berlanga: on five circular steps there is a square pillar topped by four lion heads, and on this pillar a pinnacle with adornments Crochet

Through the Puerta de Aguilera, descends a street with arcades that is a good example of Castilian architecture, supported by wooden pillars that lean on a stone base. So are those of the Plaza Mayor, completely porticoed. The Calle Mayor has Renaissance houses and a plaque alluding to the Cid.

The main monumental attraction to see in Berlanga de Duero is the Collegiate Church of Santa María del Mercado, located in the center of the town and visible by its great height. It is a late Gothic building built from 1526 to 1530. It has a hall floor with ships of equal height, large cylindrical pillars the weight of the starry vaults. There are several chapels with the sepulchres of important personages of the locality in the XVI. The baroque altarpiece of the main chapel contrasts with the simplicity of the carving of Our Lady of the Market of transition from Romanesque to Gothic (12th century). It has three streets, six main paintings, the shields of the Velasco and the Tovar. In the Chapel of the Christ lies Fray Tomás de Berlanga who brought from the Galápagos the lizard or ardacho that supports the popular saying “you are older than the ardacho de Berlanga”. Another of the religious buildings that deserve a visit is the Chapel of Our Lady of Soledad, a small construction of quadrangular plant raised at the exit of the town.

In the Royal Street stand out two emblazoned houses, and near it, in the Yubería (Jewish quarter), the adobe houses with wood framework typical of the area. Perpendicular to both is the street of the Nuns where the Convent of the Franciscan Conceptionists is located. On one of its outer walls a beautiful Romanesque tympanum is preserved. 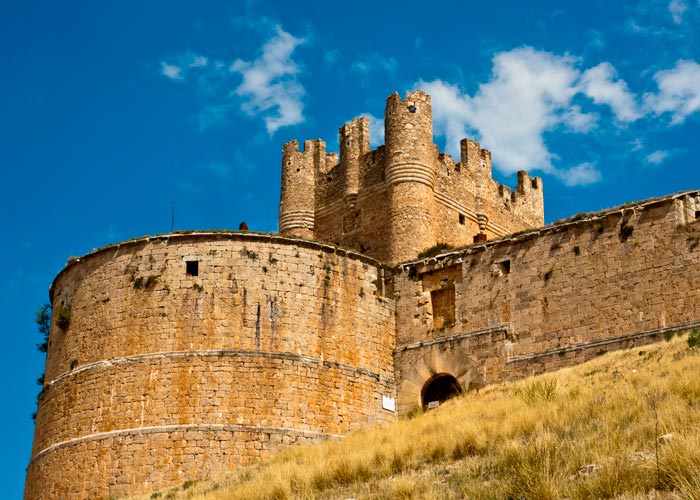 The traveler must travel the 8 kilometers to the southeast to Casillas de Berlanga, to visit carefully the Hermitage of San Baudelio, superb example of a Mozarabic temple from the beginning of the eleventh century. It is of single nave and in its center rises a pilaster in whose back part they converge all the arcs of horseshoe like a vault with form of palm. Walls are still preserved Mozarab wall paintings of the eleventh century, dedicated to profane themes; Also some 12th century Romanesque frescoes with scenes alluding to Christ. This temple was expolio object in 1922; When an art dealer bought the neighbors of the town the best preserved frescoes for 60,000 pesetas to sell them to American museums; Those who could recover are now in the Prado Museum.

Following the road to the south is the protected natural space of the Altos de Barahona with the medieval enclave of Rello, the best preserved walled set of Soria with its castle and tower of the standing homage, the pillory or iron roll of the fifteenth century Popularized the saying “The roll of Rello is of iron”. In the locality there is an active tourism company that offers activities in the area.