Home to the Visigoths, "the miracle of the light"

It has a Roman origin, and a history linked to the Camino de Santiago. Each equinos, the Monastery of San Juan de Ortega produces the called “miracle of the light” by which they light briefly some candles.

The tour of what we described in the “What to see in Villafranca Montes de Oca” section of this page can take us a full day. The trip can continue along the same road in the prehistoric site of Atapuerca to finish in the Museum of Evolution and other attractions of the city of Burgos. In the nearby and interesting Belorado can be hired active tourism activities in the area. To the north you can make a trip of a couple of hours to Briviesca, which is a locality with gastronomic tradition.

The Roman population of Auca, built on a previous village autrigon, was a little more to the south of the present location. It had numerous buildings, of which there are several deposits; Of its importance gives us idea the fact that Auca Patricia was episcopal seat during the Visigothic period; Being partly destroyed by the Muslim occupation.

By the middle of the ninth century the Count of Castile Diego Porcelos restored the bishopric of Auca and promoted the population between 873 and 880; From this base attack the area of ​​the present city of Burgos, which he founded around 884. The following year he died, being buried in the Hermitage of San Felices.

For almost two centuries the Episcopal see was maintained in Auca until the capital of the county of Castile in the city of Burgos advised its transfer in 1075. The loss of the residence of the prelate and his companions, together with the campaigns of the Aragonese Alfonso I The Bataller against his wife the Leon queen Dona Urraca determined the decadence of this place.

As the Camino de Santiago became an important means of communication, the inhabitants of Auca moved a little further north of the original site, founding on the side of the Camino Compostela a new settlement that was called Villafranca. The Codex Calixtinus – the first travel guide in the world – cites a miracle that occurred there in 1108, when a young man who accompanied his family on the pilgrimage passed away in the dreaded outline of the village called Nemus Oque as a result of their robbers and Wild animals; The pilgrim ended up resurrecting through the intercession of the Apostle, which attracted new pilgrims to the place. 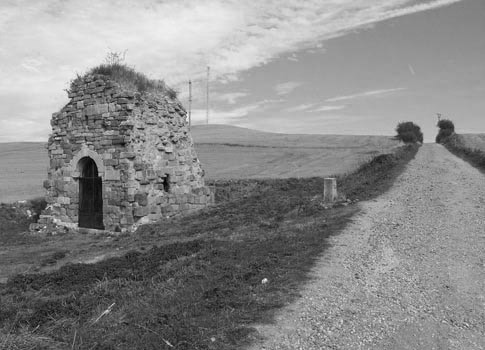 Between 1785 and 1833 was head of the Brotherhood of Villafranca de Montes de Oca in the party of Juarros, one of the fourteen of the Intendance of Burgos. It had jurisdiction over twelve places and an ordinary mayor. In November 1833, in the vicinity, a battle took place between the first Carlist revolts and the liberal troops, who dispersed them with ease. With the new regime becomes Constitutional City Council of the party of Belorado in the region of Castilla La Vieja.

What to see in Villafranca Montes de Oca

Its long urban layout is attributed to the Camino de Santiago. It emphasizes in its profile of hamlet the Church of Santiago. The old Romanesque temple, next to the castle, disappeared at the end of the XVIII century, time of construction of the present one where some blocks were reused. It emphasizes in its interior the altarpiece Romanista of the Ascension and an enormous venera (shell of pilgrim Compostela) as a pile of holy water.

Nearby is the Hospital of San Antonio Abad. Its foundation is attributed to the queen Juana Manuel, queen of Castile, in 1380, reason why also knows like “Hospital of the Queen”. Its cover dates from the XV-XVI centuries and the courtyard of the XV century. It replaces an earlier monastic foundation of the twelfth century. It is currently a pilgrim hostel and hotel.

To the south of the population is the Hermitage of Our Lady of Oca of primitive foundation prerrománica with later reforms.

The initial population was the Monastery of San Felices de Ocas. Its origin goes back to the year 863. A year later the count Diego Rodríguez Porcelos, founder of Burgos, donated to the monks several churches and heredades to which years later added other privileges. He was buried in it. In 1049 the Navarrese king García de Nájera gave it to the monks of San Millán de la Cogolla.

The head of the building is Hispano-Muslim, square, with large sandstone blocks in which Roman tombstones were integrated; Its access is a triumphal horseshoe arch. It is linked to other contemporary buildings such as San Vicente del Valle, San Pedro el Viejo de Arlanza or Quintanilla de las Viñas.

The village also has the Archaeological and Ethnographic Museum of Aucense which gives an account of the findings of the 17 archaeological sites in the area (two in Ocón, fifteen in Villafranca). In addition to the excavations linked to buildings that have made it possible to know more about their construction stages, works such as the “Vega Bajera” site were carried out, where a fragment of Roman mosaic was found and a wide spectrum of ceramic remains have been found which have allowed it to be classified “Altoimperial- Tardorromano possible “.

In the vicinity of Villafranca, along the road that leads to La Pedraja, at the beginning of the privileged natural enclave of the Oca gorge is a fountain located in the place where it is believed that San Indalecio, a disciple of Santiago, was martyred. Also nearby is La Caldera or Cueva del Moro, where the bandits dedicated to assaulting pilgrims were hiding.

From Villafranca Montes de Oca begins the journey through the legendary hills homonyms. A small detour leads to Valdefuentes, where are the remains of an important priory and Cistercian hospital founded in the twelfth century.

For a forest of oak and pine of repopulation is reached the Monastery of San Juan de Ortega. This isolated monastery is one of the most authentic landmarks and has best preserved the Jacobean spirit of the entire Camino de Santiago. It is configured with the monastic Church, the Chapel of St. Nicholas of Bari or Capilla del Santo with its Renaissance rejería, the cloister of the Jeronimos and the inn of Pilgrims with a small cloister of reddish stone of the sixteenth century. The Monastery had been a foundation of Juan de Velázquez, the religious later canonized like San Juan de Ortega. To its death the work continued until consolidating the complex monacal. It emphasizes its Church with triple apse constructed following the plans designed by the own saint, during centuries XII and XIII. The central apse has a set of columns that support superimposed arches. In its interior are conserved good Romanesque capitals of which only half a dozen are historiados; Three of them reproduce the cycle of the Nativity. You can also admire the flowery Gothic baldachin with reliefs from the life of the saint and the Romanesque sepulcher of San Juan Ortega preserved in the crypt. It is decorated with figures and scenes, elegant reliefs of careful work. At the equinoxes, if clouds do not impede the passage of the sun, there is the so-called “Miracle of Light”, when at five o’clock in the afternoon a light illuminates the triumphal arch of the northern apse and in all its detail the Annunciation of Gabriel To Mary, the Visitation of Mary to Elizabeth, the Birth of Jesus and the Epiphany of the shepherds. This timely light was made possible by the temple architect, who placed the window of the eastern facade so that the light reached there during the two equinoxes.

In the region there are other temples so important that they deserve a careful visit. In the first place the Parochial Church of San Martin de Valmala that reused the apse of the primitive Romanesque temple like arm of cruise. In that apse we can appreciate the ashlarry of cardinal color typical of that mountainous mass of the Iberian system. Its plant is semicircular and the wall is animated by thin columns. In the middle of the central wall is a small window with a narrow arpillera surrounded by a flat archivolt and diamond tip overalls on a pair of torsos columns with simple capitals (from the end of the XII century or the beginning of the XIII). Of the preserved canecillos stands out the one that seems to represent a howling chuck.

Next to Valmala is the village of Alarcia, belonging to the municipality of Rábanos. The Church of the Assumption of Alarce rises along the road and has been recently restored. It is a temple of the fifteenth century built on another Romanesque former that remains the cover of the south wall and a collection of canecillos that have been reused.

Another must stop of the French Way is the Parish Church of Our Lady of Redecilla del Camino Street. At the foot of the temple is one of the best baptismal piles of all Spanish Romanesque, more than one meter high. The foot is made up of a circular pillar to which are attached eight columns embedded with their Romanesque bases. The shafts support the cup of the pile with lobulated circular silhouette. On the outer face were carved out architectures, large curved towers and other smaller towers with triangular finials. The walls are structured on floors separated by geometric borders. The author of this pile represented the paradise of the baptized in the form of the Heavenly Jerusalem of the Apocalypse of St. John. 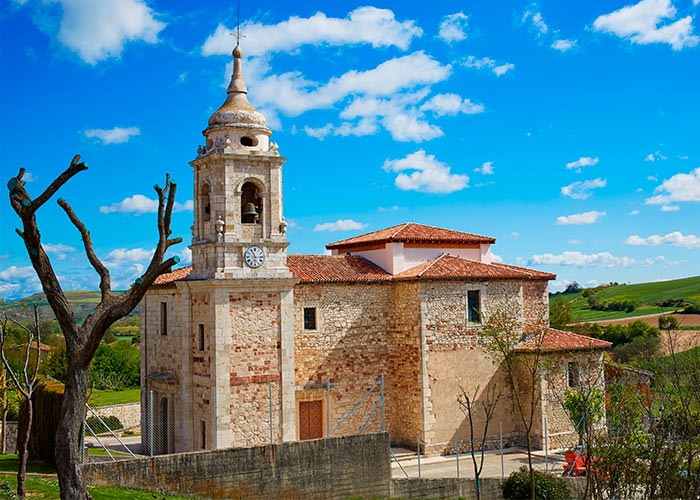 About fifteen kilometers south of Belorado you can visit the Church of the Assumption of Santa Maria de San Vicente del Valle. Its origin dates back to the 6th century – although without doubt whether it was a civil or religious building – it has a single nave on enormous pillars, some reused Roman constructions. The original half-point windows are preserved in the south wall. In Visigothic times its height was increased and open windows ajimezados in the superior part. In century X was added the head of masonry following a typology common in the Mountain range of the Demand of Burgos. At the beginning of the thirteenth century was added the triumphal arch and the southern portal where the inscription of 1224 is found.