The city with the best weather in the world

After suffering for centuries being offended by corsairs, the insular capital constantly attracts the descendents of their ancestors. However, the motives as to why are very different. The multitude of possibilities for entertainment, shopping, monuments, and an extraordinary clime all year are some of these Gran Canaria attractives. Up next, discover the history and what to see in this travel guide to Las Palmas de Gran Canaria.

The city counts with important attractives which are view worthy and monumental. There are so many that you can invest two days into exploring this travel guide to Las Palmas de Gran Canaria. Also, in the island you can practice the different modalities of active tourism in the sea during the whole year. Because of this, it is a great base for excursions to the rest of the insular teritorry.

Various options of excursion exist in which we can extend our visit. The closest locations include Arucas, Teror, and Santa Brigida, where there are traditional edifications and places of great interest.  Another great option is arriving to the Doramas Rural Park and exploring its contours. On another hand, the island capital possesses a delicious gastronomy and counts with a great variety of service hotels. Lets continue on this travel guide to Las Palmas de Gran Canaria.

This travel guide to Las Palmas de Gran Canaria goes hand in had with its history, which is worth learning about. Inhabited from centuries before, The Canary Islands were an attractive and strategic objective in the middle and modern age. Which was the motive of the unsuccessful attempts of evangelization in the XIV century. However, the first attempt of military occupancy wasn´t given intil 1473. Later, in June of 1478 in the Las Palmas Bay by knight Juan Rejón a long with the Kings troops. Four days after arriving to their campsite,they were attacked and captured Adargoma, a Aboriginal leader. The war continued. Upon the Battle of Arucas and the death of the leader Doramas (1481), a gradual pacification of the island was established.

Since 1492 when the fort of Isletas was built, they received visits of numerous enemies in the mouth of the Port of la Luz. For example, in 1522 the French corsair Jean Fleury captured a Bonvoy of Castillian ships that would arrive to Las Palmas. Nevertheless, the Canarians organized a small fleet, of minor ships. With this, they accomplished to make the corsair flee, leaving behind his prey.

Twenty-nine years later, a combined french and Turk squad commanded by French corsair “Clérigo” and the Turk “Cachidiablo”, tried to take the city. Later, they continued torwards Lanzarote, disembarking and occupying Teguise. During 1585, the englishmen Hawkins and Francis Drake attempted to raid the city, but had to retire. This would inspire Lope de Vega in his work La Dragontea.

Finally in 1599, a fleet of 73 Holland ships arrived at the port. These had just failed their attempt at raiding La Coruña and Sanlúcar de Barrameda. They were successful in conquering Las Palmas de Gran Canaria after various attempts of landing and a brief siege. On June 28, the city was evacuated by the local militia. They transferred the capital 15 kilometers farther in the village of Santa Brígida.

A little after, upon being defeated on the way to the village, the Hollanders returned and robbed Las Palmas de Gran Canaria. They lit it on fire the next day. After four more days of being disembarked in their ships, they came out in Maspalomas to burry their dead. They than began to head to the Caribbean. That is where Van der Roez would die. This left the practicality of this squad destroyed. Las Palmas would take three centuries to recover their population.

In the XVIII and XIX century, the social fight between proprietors and day laborers would begin. This produced popular uprisings. Once converted into a tax free port, during 1870 , the city began to resurge. In 1827, Tenerife segregated the Government of Gran Canaria, Lanzarote and Tenerife. This created a new province in the capital of Las Palmas. The capital saw Benito Pérez Galdós born in 1843, a key figure in Spanish literature in the XIX century. The city is also birth city of sculpturer Martin Chirino (1925), member of the El Paso confounder.

In continuation, discover the travel guide of what to see in Las Palmas de Gran Canaria.

What to see in Las Palmas de Gran Canaria

In this travel guide of things to do in Las Palmas de Gran Canaria normally involves different activities that will take you a couple of days to go through. However, the beach is simply amazing and makes you want to spend an entire year there sunbathing. You may also practice some active tourism. As well as visit some localities nearby such as Arucas, Teror, and Santa Brígida, or Doramas Rural Park.

We start our tour guide in Vegueta, where the Santa Ana Cathedral is located (15th-19th centuries). In fact, there are several religious sights you can visit if you like this kind of tourism. These include the Diocesan Museum, Santa Teresa de Jesús Chapel, and the Episcopal Palace (17th century). Others include San Antonio Abad Chapel, Santo Domingo de Guzmán Church (16th-18th centuries), San Bernardo Church Parish (17th century), and San Francisco Parish (17th century).

Some other sights you will enjoy in this tour guide are the Consistorial Houses, which house the Provincial Historical Archive; Columbus House (15th century), with several interesting pieces such as ceramics, documents, maps and paintings. Also, the Vegueta Cemetery (1811), full of sculptures and monuments; English Cemetery (1834) and the English Chapel with a Victorian atmosphere; and the King’s Castle (16th-18th centuries). In fact, castles are numerous here; Las Palmas de Gran Canaria also has San Pedro Mártir (16th-17th centuries) and Mata Castle (18th century) -both being used to protect the city. We cannot take the Light Castle (1601) for granted. It is located in the forgeous area called the Isleta. 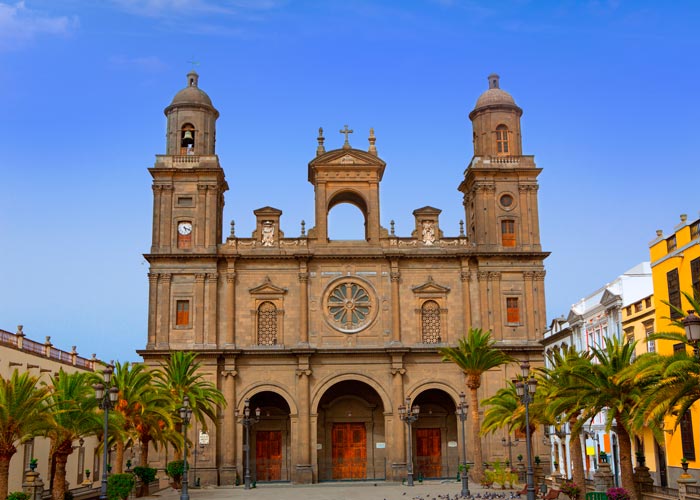 Next on the travel guide.

In Triana Quarter we can see a building called Gabinete Literario (1833) that will fascinate literature-lovers. In this line, Pérez Galdós Theater, built between 1868-1890 but set up again in 1928. The Canarian Museum shows a great architectural, ethnological and geological collection. Élder Science and Technology Museum has an interesting planetarium. The Atlantic Modern Art Center fosters the works of different arts of Africa, America and Europe. Pérez-Galdós House-Museum (late 18th century) was the house of the famous Spanish writer that gives name to the center. You cannot miss either the Alfredo Kraus Auditorium, located in a gorgeous volcanic plinth.

For natural sites in this travel guide, we recommend visiting the Siete Lagares Courtyard, the Vieja and Clavijo Botanical Garden, and the Frailes Cave. Others worth visiting are the Canarios Cave, the Especiales de Azuaje Natural Reserve, the Tamadaba Natural Park, and Doramas Rural Park. Finally, regarding beaches, we are sure you will visit a couple of the following places: Canteras Beach (3 km long), Alcaravaneras Beach, San Cristóbal Beach, La Laja and El Confital (for surfing).

With this, we conclude our travel guide to Las Palmas de Gran Canaria.