Sea and emigration between two kingdoms

Colombres is a border territory between Asturias and Cantabria, dotted with cliffs, beaches, and mountains that plunge into the sea, full of stories of voyages that can be glimpsed in the numerous exotic houses of the indianos (Spanish emigrants to America) which occupy Colombres.

Plan your trip to Colombres

This town nestled in the protected landscape of the Asturian eastern coast is noted for its indiano architectural remnants in the form of cottages and public works such as the town hall. It is a small town that can be seen in half a day; the rest of the trip can be dedicated to visiting the coast, especially the beautiful Tina Mayor Bay, and the important El Pindal Cave. For the next few days of your visit, we suggest an excursion to the beautiful town of Llanes to the west, while to the east you’ll come across the port and marshland of San Vicente de la Barquera in Cantabria, and for those who prefer the mountains, the Picos de Europa National Park begins to the south of the town.

Human occupation of the territory of Ribadedeva, where Colombres is located, dates back at least to the Upper Paleolithic, which is represented by the unique works of art preserved in El Pindal Cave. Greco-Roman sources indicate that various peoples occupied the mouth of the Deva River, including the belligerent orgenomesco tribe.

There are no clear references about the territory of Ribadedeva until the 10th century, although some documents of San Salvador de Celorio confirm the existence of an independent territory. In the 13th century, King Ferdinand III absorbed Ribadedeva into Castile as part of Santillana, establishing it as a link with the kingdom of León.

The link with Asturias is owed to the ecclesiastical government maintained by Oviedo, the Asturian capital, over this territory, which gave rise to a peculiar legal situation, as in the eyes of civil law it belonged to the Castilian kingdom while the diocese belonged to the Crown of León. In 1376, the inhabitants of Ribadedeva were allowed to organize themselves as an autonomous municipality.

In 1517, Colombres received a visit from Carlos I when the king arrived in Spain. Two centuries later, the area was named in the Catastro of Ensenada (1753), which highlighted its corn farming and great variety of fruit plantations. 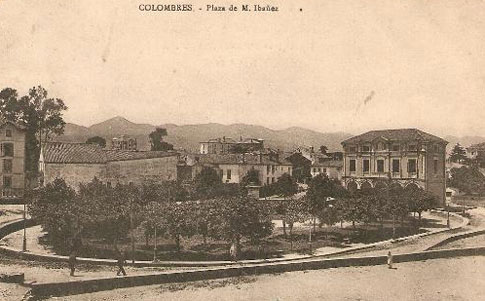 Old view of the Plaza de Manuel Ibañez in Colombres

During the War of Independence on the Tina Mayor estuary, the patriots established a defensive line known as the “Colombres Line,” fortifying the urban center. With Queen Isabella II, it was reincorporated into the province of Oviedo in 1833. Its crest includes the arms of the city of Santander and of the Principality of Asturias as a summary of its history.

The local economy did not change much throughout the history of Colombres, until in the final decades of the 19th century some of the emigrants who had made a fortune in America returned. In their old age, the emigrants promoted countless public works and incorporated their hallmark style into their new houses, founding a unique and recognizable architectural style.

With the arrival of the railroad at the turn of the century, seaside spa resort tourism (Playa de La Franca) and even thermal tourism (Andinas) developed along the coastline. The Civil War brought the Battle of the Sierra del Cuera to the area, marking the beginning of the loss of Asturias to the Government of the Republic.

In the post-war period, part of the population found themselves economically depressed and obligated to emigrate once again, this time to Central European countries. Currently, the primary sector (agriculture, livestock, and fishing) and tourism prevail.

What to see in Colombres

Ribadedeva shares the beautiful Protected Landscape of the East Coast with Llanes and it is also part of the Protected Landscape of the Sierra del Cuera, a spectacular mountain range with heights exceeding 1,300 meters. Before entering the urban center of Colombres, we recommend touring the beaches of La Franca and el Osu and enjoying the incomparable setting of the Tina Mayor estuary.

Be sure not to miss El Pindal Cave, declared a UNESCO World Heritage Site. A spectacular cliff comes before the entrance to the cave, which contains several series of drawings grouped together in panels and sketched mainly in red. Among the subjects represented are bison, horses, deer, claviform symbols, and anthropomorphic impressions, although the most famous are the elephant and the fish. Investigators date the oldest preserved works to 18,000 years ago, with the most recent datable works traced to 6,000 years before our time.

The most noteworthy sight in the small Historical Complex is the abundance of so-called indiano architecture. The wealth brought back by the “Americans” transformed it into a modern, remarkable, colorful, and exotic town. The town hall with its beautiful plaza and the Parish Church of Santa María, built in the late 19th century, are good examples of the indiano initiative.

However, the most relevant sight is Quinta Guadalupe, home to the Fundación Archivo de Indianos, whose Emigration Museum documents this phenomenon in the luxurious interior of a home built by Íñigo Noriega Laso. The foundation has collaborated closely with the Asturian Centers scattered throughout the American continent to gather documents about the progression of Spaniards in those territories.

The visit to the cottage is completed with the possibility of enjoying an Indiano Tour which includes examples of some of the most noteworthy of these kinds of homes. Among these are the Casa de Piedra, the Casa Roja, the Casona de Íñigo Noriega Mendoza, the Casa de los Leones and the Casas gemelas de Florencio Noriega.

One of the most notable buildings is Noriega Tower, dating back to the Middle Ages and located in the neighborhood of Mediavilla in the small town to which it gives its name. It reaches 11.65 meters high, divided into four levels and complete with stone battlements.

In Pimiago, be sure not to miss the spectacular coast that surrounds San Emeterio. The tour is completed by a magnificent oak forest and a lighthouse with the same name as the Shrine of San Emeterio, the patron saint of foot diseases and shoemakers, who is honored in the first days of March. In the yard and portico of this small rural church, the locals celebrate Saint Emeterio and attend an auction for the ramu (a pyramidal wooden frame decorated by the women using branches, flowers, and hangings from which they hang baked goods), finishing the religious celebration that precedes the traditional religious pilgrimage.

The tradition also points out the fountain near the shrine as the place visited by those afflicted with foot problems and traveling shoemakers, who would embark there on their journey through the towns of Castile, Cantabria, and Basque Country in a type of migration very common in eastern Asturias among tradesmen who did not make the leap to America. 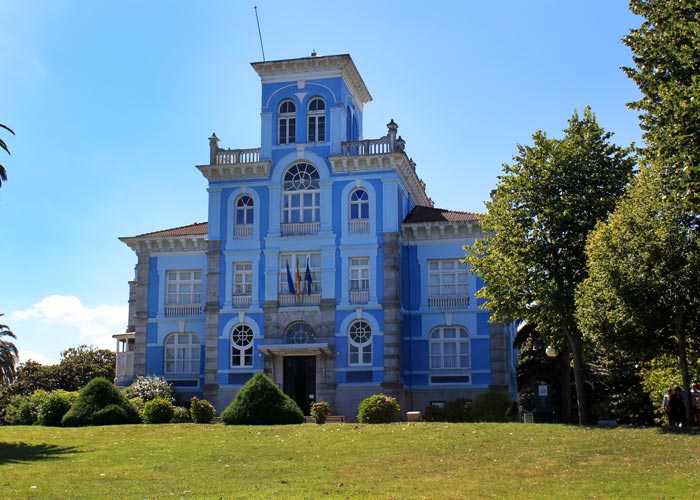 A little farther away, you will find the Monastery of Santa María de Tina Mayor, which is completely in ruins and surrounded by replanted eucalyptus trees, immersed in an esoteric environment that was founded in the Middle Ages on top of the ruins of a pre-Christian sanctuary.

The monastery acquired historical coherence thanks to the Visitor Center of San Emeterio. Through two elements (El Pindal Cave and the Monastery of Santa María de Tina), visitors can learn in detail about the history of the place. One consistent element in the exhibit is an understanding of the manmade changes in the landscape.

The best preserved Arab baths in the Iberian Peninsula
If Spain can proudly boast of anything, it is its rich and varied cultural heritage, Más información