Horror fans! If you still don’t have a plan we recommend you some places where to spend Halloween in Spain and live an authentic scary night. Take your flashlight and don’t forget your costume and a pair of comfortable shoes.

Is there a scariest place to spend Halloween than this abandoned sanatorium? This building located in the forest of Navacerrada was a tuberculosis hospital and later a psychiatric hospital. Inside its walls hundreds of people died in terrible conditions and it is saif that their souls remain there. Today it is really deteriorated. Do you dare to go?

This is one of our favorite places where to spend Halloween. There are lots of tales regarding this location: UFO sightings, strange beings and even that the door connects to anoter dimension.  In 1890 the “pear girl” went to collect fruit and crossed this door. She remained missing for decades and one day, she came back home still looking like a child and feeling as if she had left some hours ago. The girl told that some light beings guided her to the entrance of the cave.

If you are interested, the town organises hicking routes in Halloween to repeat the girl’s way to the cave! Maybe you get the chance to see those light beigns too…

An abandoned town is always a great place to spend Halloween. Belchite was one of the most famous sceneries of the Civil War because the Belchite Battle took place there and it remained totally devastated. There are many who claim to hear voices, cries and the sound of the bells. Here more than 6000 people died.

People from Galicia do not celebrate Halloween but their own deaths night based on their Celtic origins: La Festa do Samain. The leyend tells that the spirits come to our would during the night of the 31st of October. In the present, there is a parade that takes place in the city center and ends up burning the big pumpkin by the estuary. We recommend you to get dressed as a white gosth to keep on with the tradition.

Soria celebrates the deaths night hand by hand with Adolfo Becquer and its leyend “El Monte de las Ánimas”, considered the best horror tale of the Spanish literature. A parade goes along its streets with gigant puppets, keletons and templar monks until it arrives to the skirts of the mountain. There, with a fire, they read the tale

If you want to spend a tenebrous Halloween night, these caves sourrounded by a mysterious halo are your perfect choice. Medieval “witches” used to get together in covens and pagan celebrations. As the Inquisition did not approve these practices, five of them died burnt.

To end up, in our selection of places where to spend Halloween is Curtijo Jurado. This hostal from the XIX century is located in Campanillas, the town from Malaga. It hides one of the most terrific stories. It is said that the owners acomplished satanic sexual relations after which, some young girls disapeared. The house has a hidden basement with tourture machinery and many … claim to see fantasmagoric shapes of girls walking in the rooms. The house is definetly scary!

Spain’s Most Fascinating Cathedrals
The peak of religious architecture is the cathedral temples. Their stones have withstood conflicts and Más información 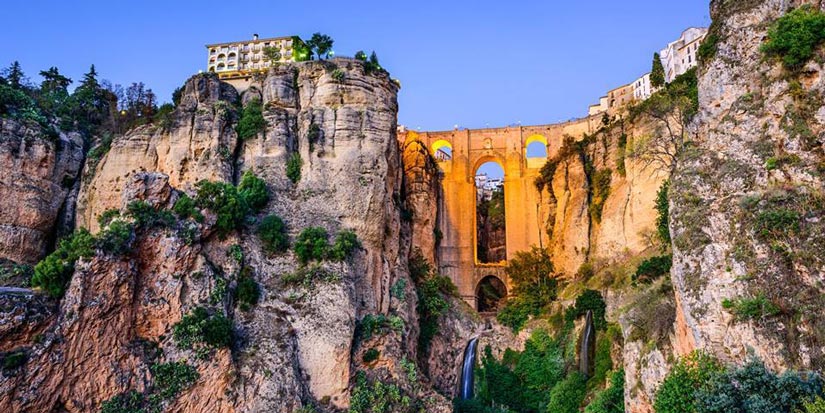 10 Spanish Cliff-Side Towns: Gazing into the Abyss
[vc_row][vc_column][vc_column_text]The beauty of our geography leaves us with Spanish villages on unusual cliffs that more Más información

Congost de Mont-Rebei, a breathtaking gorge between Huesca and Lleida
Gorges are one of the most attractive geographical elements you can imagine. Vertical spaces that Más información