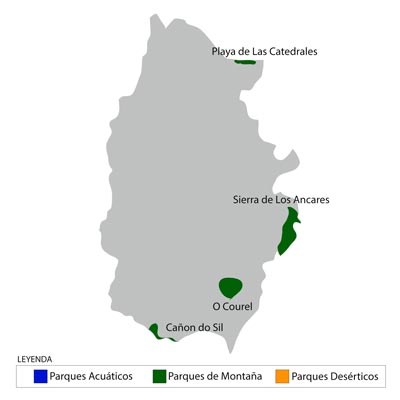 The Galician Ancares are the western side of this mountain range extending over 67,280 hectares of land shared between the provinces of León and Lugo. We address the park’s eastern territory on a specialized page: the Ancares of León. In 2006, it was declared a Biosphere Reserve by UNESCO. It is also included—alongside the nearby O Courel mountains—in the Natura 2000 network as a Site of Community Importance of Galicia.

The Ancares Mountains owe their name to the Ancares River, which together with the Burbia and Cúa Rivers constitutes the backbone of the area. Keep in mind that the abrupt orography caused the riverbanks of these rivers to be the main travel routes. It is a mountainous setting in Lugo whose main peaks are Mount Miravalles, Mount Mustallas, and Mount Cuiña. Due to the inaccessibility of the scarce and dispersed centers of population of the Galician Ancares, the most traditional features of Galician mountain culture are preserved there; small villages in which the few inhabitants live in direct contact with nature, making a living off farming, gardens, and—in growing numbers—tourism. The examples of popular architecture are the pallozas, hórreos, and tietos which are used today by inhabitants for their everyday chores.

Vegetation: The points of lowest elevation in the Ancares of Lugo have a vegetation rich in species such as Pyrenean oak and holm oak. As you ascend up the mountains, you’ll begin to see oak, maple, sorb, and birch formations that, little by little, give way to a bushy vegetation characteristic of such high elevations. The fauna is typical to the mountains of northeastern Spain: roe deer, otter, wolf, Pyrenean desman, brown bear, and broom hare. Among the birds that can be seen here are the golden eagle, short-toed eagle, Egyptian vulture, peregrine falcon, and grouse, one of the most representative species of the Ancares of Lugo.

Active tourism: The Galician Ancares are a mountainous ecosystem in which the most practiced activities are hiking, climbing, and cycling. On this page we’ve compiled the active tourism options in Lugo, including the businesses that operate in the Galician Ancares. In addition, the French way to Santiago passes through the Ancares.

How to get there: From Lugo, take road N-VI towards Pedrafita do Cebreiro. Take the detour towards San Román connecting to road LU-722, which goes into the mountains passing through the town of Piornedo before going into the territory of León.

Below are some recommendations of places to eat and sleep around the Galician Ancares.

Other Naturals Park that can interest you...