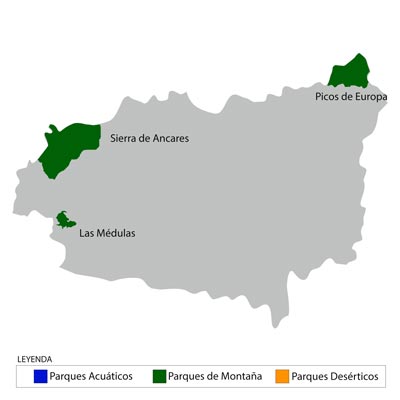 The Ancares Mountains of León are known around the world, as for over a thousand years they have been the most important mountain range that crosses the French way of the Camino de Santiago. The Ancares extend over 67,280 hectares of land shared between the provinces of León and Lugo. In 2006, it was one of the places in Spain declared a Biosphere Reserve by UNESCO. It is the eastern side of a territory shared with the Natural Park of the Galician Ancares, located in the province of Lugo.

Between the town of Pedrafita do Cebreiro and Miravalles Peak (on the Asturian border), the Ancares of León are made up of a series of valleys punctuated by bodies of water, such as the Burbia, Ancares, and Cúa Rivers.  The Ancares are a mountainous terrain with its greatest heights at the peaks of Miravalles, Mustallas, and Cuiña. At these peaks, you can visit cirques and glacial lagoons.

Due to the historical isolation of these valleys caused by the difficulty of accessing them and the severe weather during the winter, the Ancares Mountains of León are an area where the most traditional aspects of the cultures of León, Galicia, and Asturias are preserved in the form of small villages and settlements. A good example is the pallozas, hórreos, and tietos that still stand today and are used daily as part of the heritage of the cultures that inhabit these mountains.

The vegetation of the Ancares in León varies according to altitude. The points of lower elevation have a vegetation rich in species such as the Pyrenean oak and holm oak. As you ascend up the mountains, you’ll begin to see oak, maple, sorb, and birch formations that give way to a bushy vegetation characteristic of such high elevations. The fauna of the Ancares in León includes the roe deer, otter, wolf, Pyrenean desman, brown bear, and broom hare. The most typical birds that can be seen are the golden eagle, short-toed eagle, Egyptian vulture, and peregrine falcon. It is much more difficult to see a grouse, one of the most representative species of the Ancares.

The Ancares of León are a mountainous ecosystem in which the most practiced activities are hiking, climbing, and cycling. Click here to access our page about active tourism options in the Ancares of León and the rest of the province of León.

How to get there: From Ponferrada, the Ancares Mountains of León can be reached by way of roads LE-711 and LE-712, which pass through the towns of Vega de Espinadera, Candín, Barbia, and Suarbol before going inland towards Galicia. Road N-VI borders the Ancares of León on its southern tip, going through towns such as Villafranca del Bierzo and Vega de Valcarce. On the northern side of the Ancares, roads LE-493 and C-623 cross through Villablino on the way to Asturias.

Below are some recommendations of places to eat and sleep around the Ancares of León.Leoneses