It seems incredible, but very close to the city there are still places where you can breathe a cleaner air. In the northwest of the community of Madrid, the Sierra de Guadarrama, whose highest peak is Peñalara, watches from the heights. This peak belongs, in turn, to the Peñalara Natural Park. In addition to the aforementioned peak, the natural park, declared as such since 1990, has five other peaks: the Pajaros cliff, the Claveles cliff, the Hermana Mayor, the Hermana Menor and the Peña de los Quesos. But here we will focus on the three most famous routes around the peak of Peñalara, three different ways to know a natural environment of great wealth. A perfect destination to escape from Madrid in Madrid. 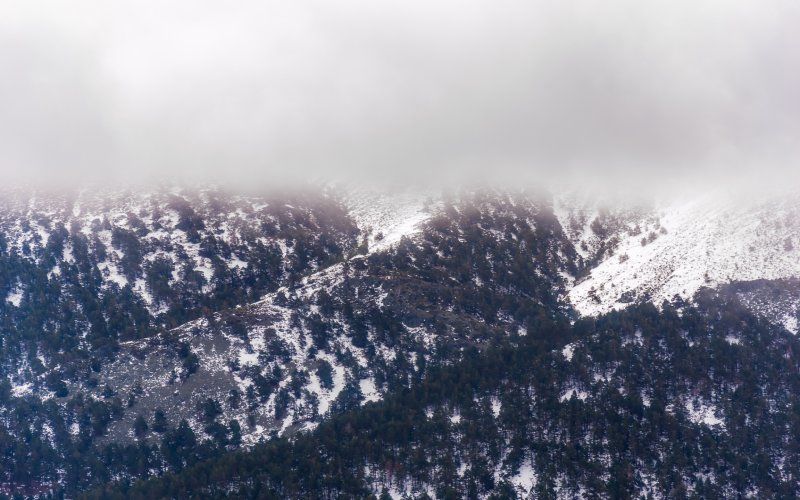 First of all, how to get here? Where to start the route? Which of all the routes is the best? Step by step. The three most famous routes of this mythical park all start from the same place: the port of Cotos. Here there is a large parking lot where you can leave your car. It is also very close to the Cotos train station, which can be reached, with patience and patience, from the center of the capital. Of course, if you go by car it is better to arrive early because the parking lot fills up quickly.

In front of the parking lot is located, well visible, the Peñalara Visitor Center. Any questions that may arise before starting the trail can be solved here without problems. Some of the most frequently asked questions are the following. Can dogs be taken? Yes, but they must be leashed, as this is a protected area. Is it possible to camp in the area? Absolutely not. Is it allowed to sleep outside in the park? Yes, but with restrictions: not on the peak, not in the lagoons and only from a certain height. Since the regulations are constantly changing, if you are going to spend the night in the area it is best to ask. 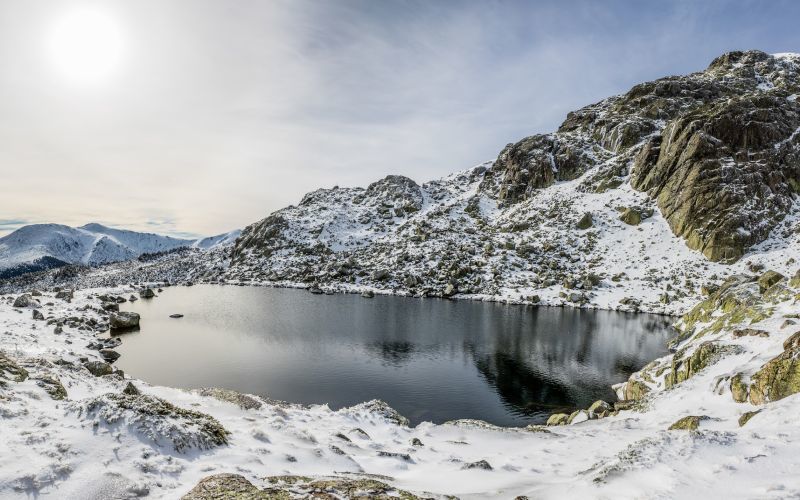 With everything clear, the trail begins. The easiest, shortest and most familiar trail to do in the area is the one that leads to the Grande Lagoon. It is a trail of about three kilometers, not counting the return. The path is easy to follow, among other things because it is very well signposted. In the first meters awaits a small climb, the only one on the route. After crossing a lush forest of wild pines and leaving behind the Cubeiro fountain, the well-known viewpoint of the Gitana opens up.

Then, a wide path continues to the right, bordering the Peña de los Quesos. At the end of this section there are two options. You can either continue the path to the foot of the Grande lagoon, or venture to the Pájaros lagoon, a much longer path. On this occasion, we will opt for the first alternative. You only have to walk about 500 meters more to reach the lagoon by a wooden walkway.

The Grande de Peñalara lagoon is located in a glacial cirque at an altitude of 2017 meters. Surrounded by the mountains of Peñalara, its highest peak included, the goal of the trail presents a spectacular aspect. Of the glacial lakes that are distributed throughout the park, this is the busiest. The return can be done by the same place where you came from or by another path that connects with the beginning, thus becoming a circular route. 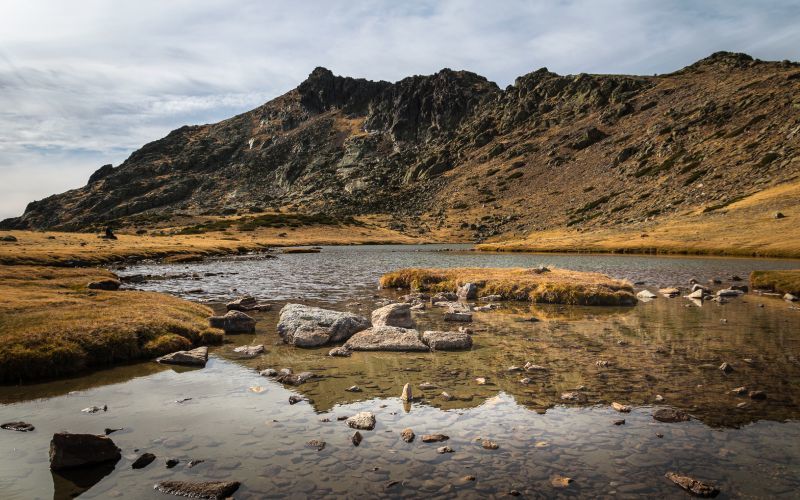 Lagoon of the Birds of Peñalara | Shutterstock

The ascent to the Birds lagoon is actually an extension of the Grande lagoon route. For this reason, these routes are usually condensed with the name of the route of the lagoons of Peñalara. But, be careful, the path to the Pájaros is much longer and the difficulty also increases. In this case it reaches 11 kilometers between the outward and return, always starting from Cotos. But it is possible that the accumulated difference in altitude of 540 meters makes it seem more. Between 5 and 6 hours of walking await.

Returning to the point where the road forked on the route to the Grande lagoon, in this case we will choose the direction that points to the Pájaros. Then begins a tough climb of 400 meters, perhaps the most difficult part of the day. This ascent culminates at the Javier viewpoint. Afterwards, the trail continues between more glacial lagoons, pits and immense alpine meadows. In between, it is not uncommon to come across an imposing mountain goat. 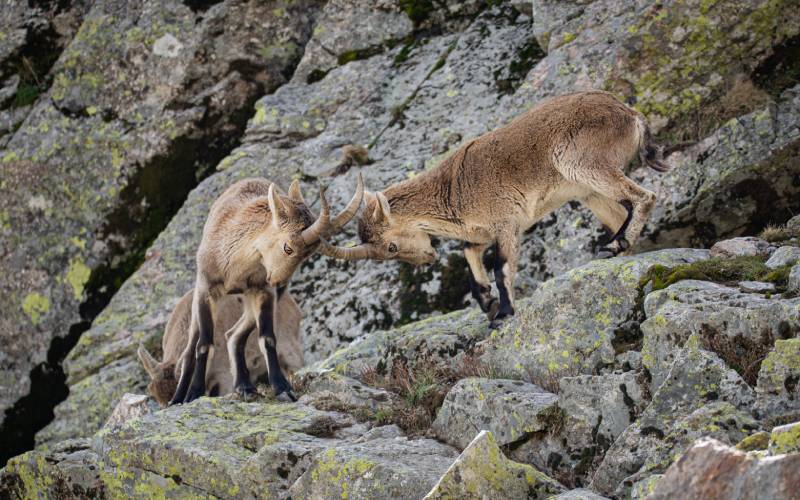 Two mountain goats fighting in Peñalara. This image is not rare to see. | Shutterstock

The culmination of the trail arrives with the Pájaros Lagoon at 2170 meters altitude. In the summer months, its waters never disappear. In the winter months, it remains frozen. Because of this, its only occasional inhabitants are amphibians and birds. To return, you simply have to retrace your steps until you reach the intersection that leads to the Grande lagoon. There it joins again with the opposite way to the one that ran by Peña de los Quesos. It is the same as if you were returning from the Grande lagoon.

The ascent to Peñalara Peak

The route to the peak of Peñalara follows a different itinerary than the previous two. However, the starting point is the same. In this case the trail consists of 10 kilometers between the outward and return, which accumulate almost 600 meters of elevation gain. The difficulty to do it is moderate, perhaps a little higher than in the case of the Pájaros lagoon. 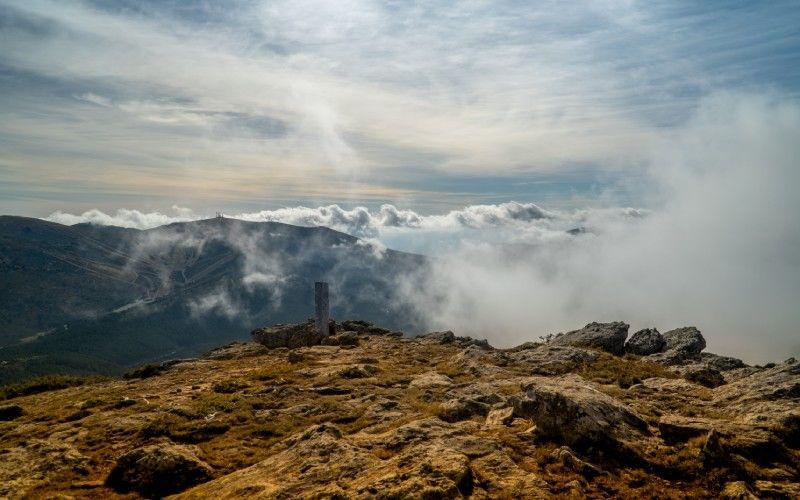 The only part of the ascent that is common with the route of the lagoons is the first one. Then, from the Mirador de la Gitana, the path is totally different. This time you take the path to the left, leaving the viewpoint to the right. There comes a moment when the pines disappear to give way to the vegetation more typical of the high mountains. Shortly after, the path takes the hiker to its most difficult part, known as the zetas de la Hermana Menor. They consist of a zigzagging ascent that takes two hours. However, the environment makes it easier.

Once this section is overcome, the peak awaits. A granite monolith confirms the feat. The traveler has reached the peak of Peñalara, the highest in the mountains of the Community of Madrid and Segovia, at 2428 meters. From there, the view reaches neighboring villages, lakes, mountains, the Sierra de Gredos, the Pinilla reservoir … Now remains the return, shorter and easier due to the descent. Of course, first to regain strength and enjoy the victory.