If there is a place in the world capable of having the whole palette of colors in a landscape, it is the Canary Islands. Eight small paradises of crystalline waters that hypnotize anyone who walks the immensity of its beaches. Getting lost in the beauty of the archipelago is easy. In fact, it is inevitable. Rocky scenery taken from another planet, magical villages on the seashore, endless dunes, majestic mountains…

With a total area of more than seven square kilometers, this particular archipelago is the jewel of the Spanish Atlantic. Not only because of its exceptional climate 365 days a year, but also because it is a must for hiking enthusiasts. In fact, this community has four national parks. Two of them have been declared Natural Heritage by UNESCO. This article explores the most representative hiking routes in the Canary Islands. Perfect routes for all those who want to explore their true essence.

Tenerife from the heights

That Tenerife is the island of a thousand plans is well known. But the fact that its well-known natural park is considered the most visited in Europe is perhaps not so obvious. Declared a World Heritage Site by Unesco and as one of the 12 treasures of Spain, the Teide National Park is one of those places that stays forever in the heart. It is also an excellent way to get into the spirit of Tenerife. 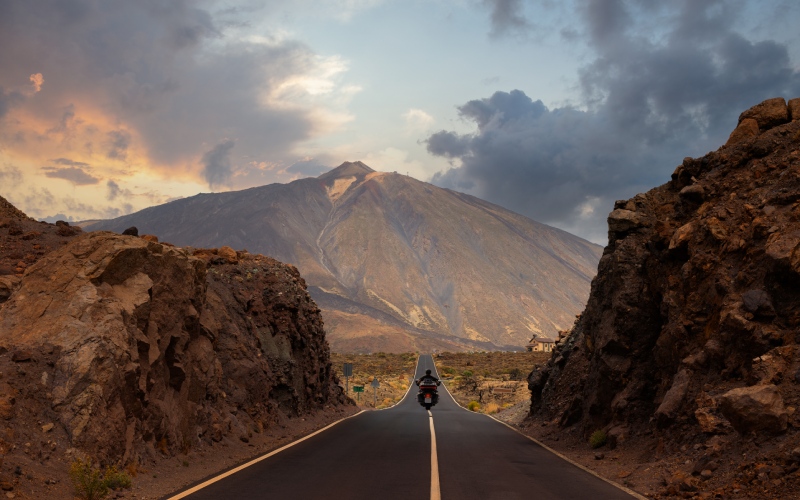 A road leading to El Teide in a martian landscape. | Shutterstock

Home to ancient shepherds, this beautiful spot is the starting point of one of the best routes to get to know Tenerife, the impressive ascent to Teide. There are two ways to do it: by cable car or on foot. Both options start from Montaña Blanca and ascend through the Altavista Refuge and La Rambleta. Once there, you go up the Telesforo path to the main crater at 3,718 m. The best part? That feeling of being on the moon at every step. The volcanic character of the park, with irregular rock formations and rivers of dry lava seem taken from another universe. It is one of the most beloved jewels of the Canary Islands.

Once at the top the landscape changes. The lunar rocks combine with the green of the golf courses, the intense blue of the sea and the white of the houses in the villages. The best letter of introduction for an island that is able to combine sport with chill, culture and gastronomy.

The legend of Teide’s last eruption

It is said in the villages near Teide that thousands of years ago there lived an evil being called Guayota. One day he kidnapped the sun god and held him inside the volcano. The island was impregnated with darkness and, to prevent it from continuing over time, its inhabitants asked the god Achamán for help, who managed to defeat Guayota. Thus, he sealed the crater so that a similar episode would not happen again. Curiously, according to legend, this chapter mathces with the last great eruption of Teide.

A hiking paradise on the Isla Bonita

La Palma is a unique scenery wherever you look at. Green forests, black sand beaches, night skies full of constellations, handicrafts and villages to live in forever. One of its most characteristic routes is the one that runs along the path of the Caldera de Taburiente. Specifically, the route leads from the viewpoint of Los Brecitos to the ravine of Las Angustias. 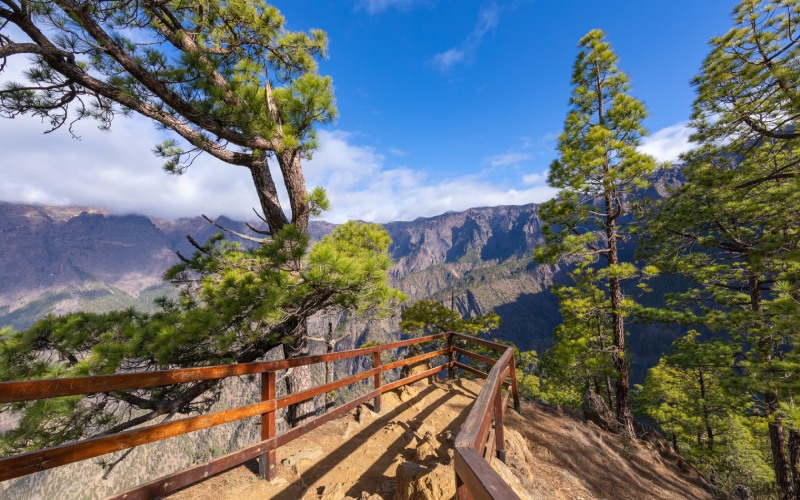 This beautiful route is the perfect opportunity to familiarize yourself with the lush vegetation of the island composed of pines, laurel, palm trees and dragon trees. Precisely because of this variety of flora it is known as La Isla Bonita. For this reason and because it hides jewels as beautiful as the one found in the final stretch of this tour: the Cascada de los Colores (Colors Waterfall). An impressive waterfall in which the rocks are dyed in ocher, green and yellow colors due to the high iron content of the water. One of the most beautiful hikes of the Canary Islands. 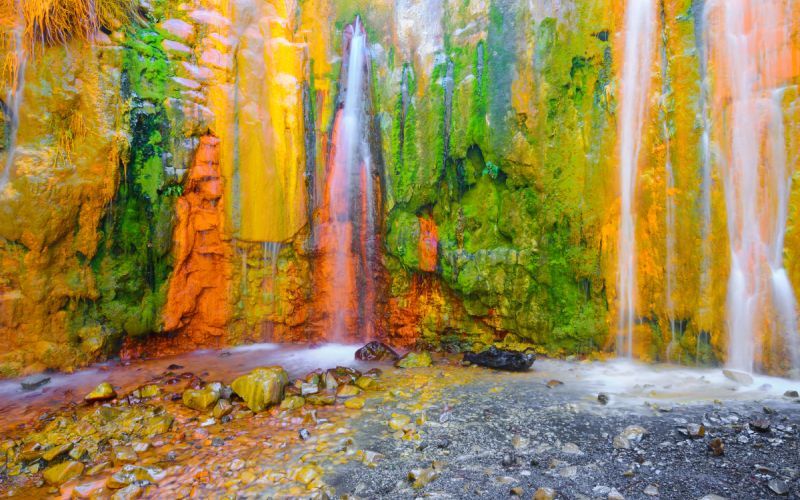 The more water, the more colors the waterfall has. | Shutterstock

Route through the history of El Hierro

Discovering El Hierro is a pleasure in all senses. Declared a Biosphere Reserve in 2000, this Atlantic pearl is an authentic source of history and culture. One of the best areas to immerse yourself in the anthropological past of the island is on the hillside of El Julan. Dressed with pine forests and low clouds, this peculiar natural oasis offers a very complete route, perfect for discovering ancient rock engravings, cattle guarding caves and archaeological sites. For example, an ancient meeting center called tarogor or mollusk deposits. 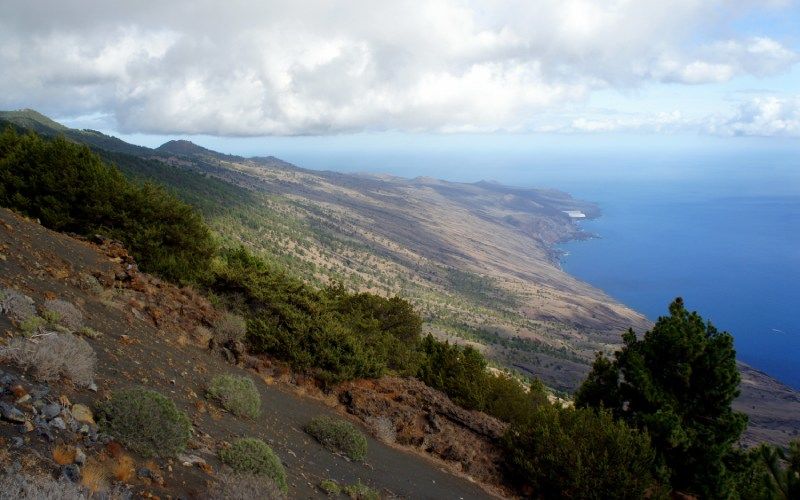 A fairytale forest in La Gomera, the green lung of the Canary Islands

To explore Garanojay is to discover a story full of elves and magical creatures that lead the visitor through a seven-hour route through one of the most beautiful places in the Canary Islands. A treat for the eyes in which there one never gets tired of breathtaking panoramic views. 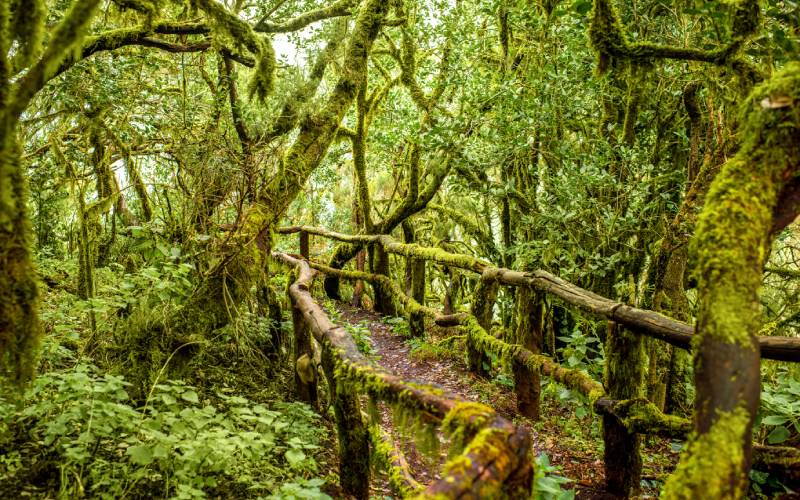 The watchman of Gran Canaria

Gran Canaria is known for many things. Like the impressive dunes of Maspalomas and its endless beaches. However, this wonderful island hides a majestic monolith that receives the name of Natural Monument of Roque Nublo. A gigantic block of stone that can be accessed by a simple hike that combines vegetation with the volcanic soul of the archipelago. The Canary Islands hide here one of the best representations of laurel forest of the planet. 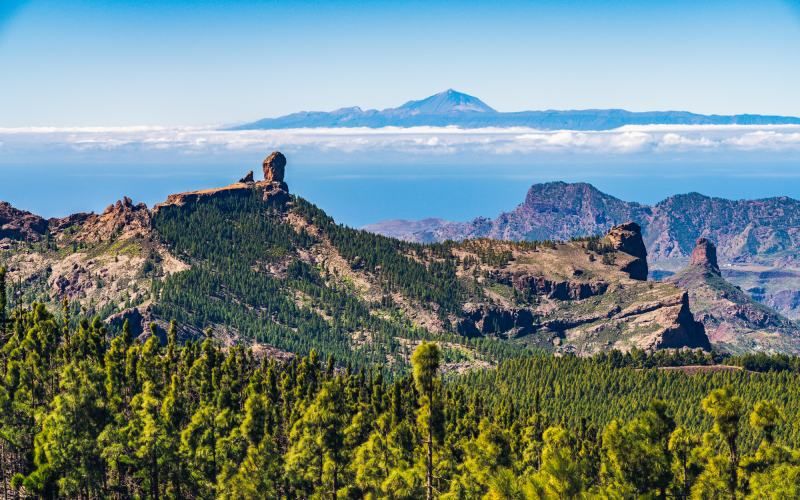 The tour begins near the village of Cruz de Tejeda and runs along a perfectly marked trail. The path is surrounded by the typical Canarian pines that, little by little, are left behind as it ascends. It is then, at the moment when the ascent ends, when you glimpse a plain that contains, in the distance, the imposing monolith of 80 meters high. A huge giant that watches sleeplessly from almost two kilometers above sea level. Simply spectacular.

Located in the Betancuria Rural Park, the Ajuy Caves are a natural museum in every sense of the word. In fact, they are one of the few areas where you can meet the oceanic crust in its most virgin state. The most recommended route begins in the village of Ajuy, located on the edge of a ravine. The first thing that catches your attention is the winding road leading to the caves. A mixture of sand and dirt, this path allows the hiker to enjoy beautiful views of the ocean and the village. Before arriving, you will discover fossil dunes, considered the oldest in Fuerteventura, and remains of ancient lime kilns. 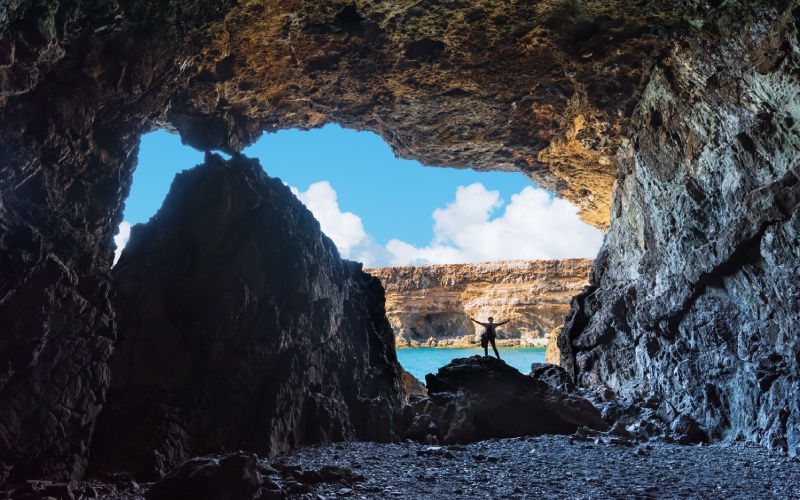 The caves of Ajuy. | Shutterstock

Access to the caves is secured by wooden railings. Its interior is just breathtaking. More than 40m of altitude in a scenario surrounded by stone, humidity and a peace that is experienced in few places. In those who have managed to endure the relentless passage of time. 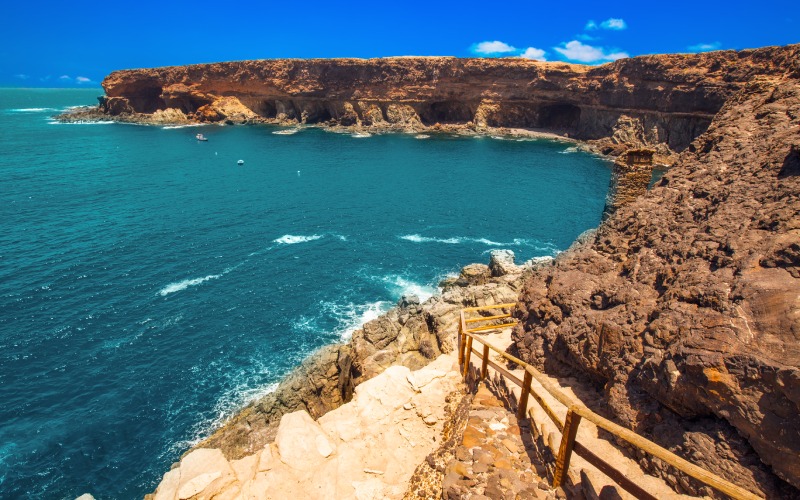 The path that leads to the Ajuy caves. | Shutterstock

Craters in Lanzarote, pure volcanic landscape in the Canary Islands

The best way to witness the strong volcanic character of Lanzarote is by entering the volcano of Caldera Blanca. An impressive crater of 1,200 meters in diameter that is located on the border of the Timanfaya National Park. A treat for the eyes whose path begins in the village of Mancha Blanca. 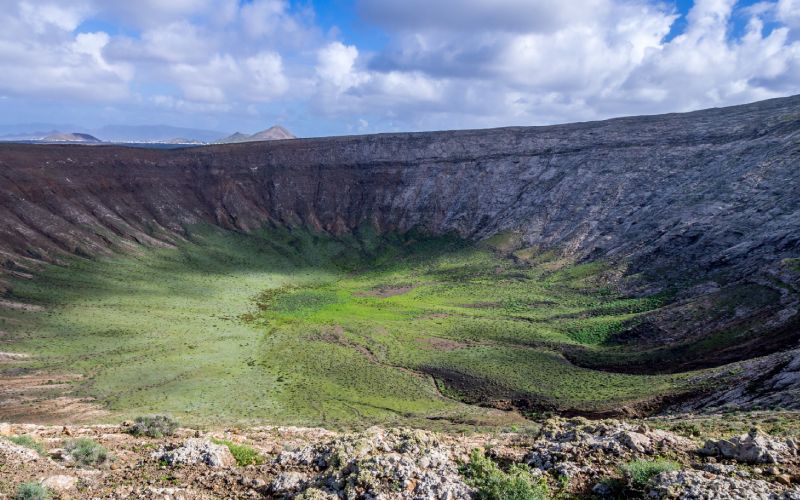 The route time to the crater is about an hour and a half in the middle of a rocky landscape in which you can see traces of lava in some areas. Before arriving there is La Caldereta, another smaller crater where, curiously, agricultural work was carried out during the first half of the twentieth century. Once in Caldera Blanca time stands still while an impressive 360 degree view of Lanzarote rises before the volcano. A landscape that is very typical of the Canary Islands. 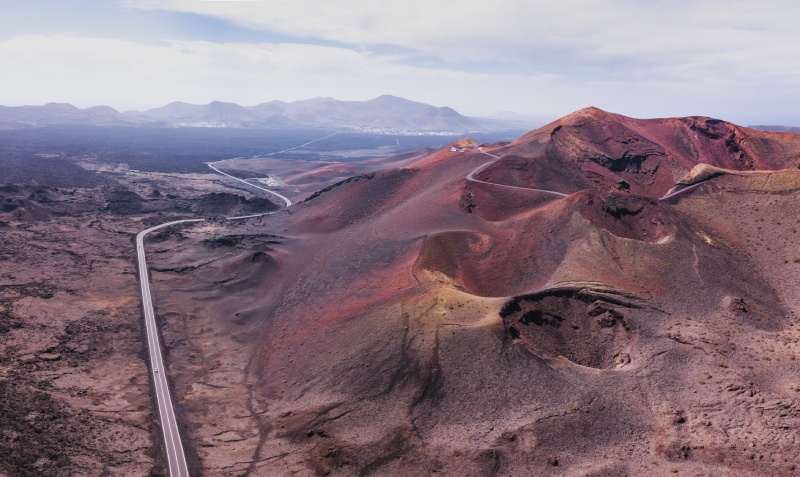 La Graciosa from north to south, some of the most paradisiacal beaches of the Canary Islands 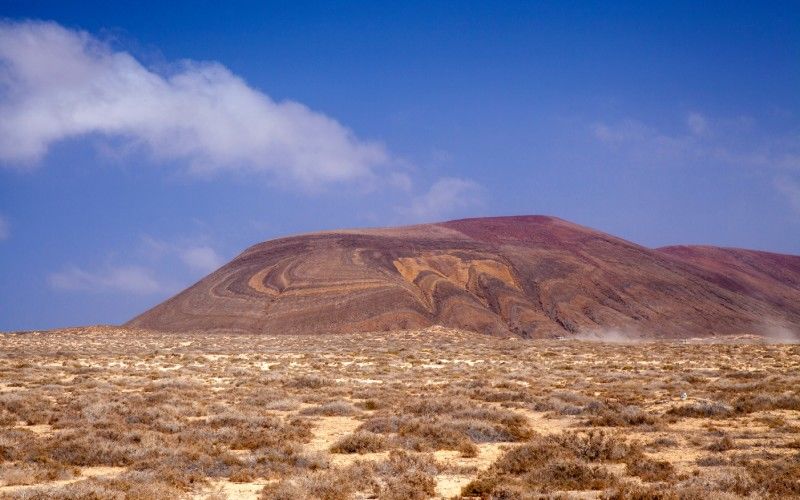 What is the best way to soak up the essence of La Graciosa? With a complete tour from north to south. The Slow Life island extends over 30 kilometers perfect for exploring by bike or on foot, depending on the type of stay you have chosen. The paths are signposted and the route is very enjoyable, especially because it can be combined with refreshing swims in some of its beaches. In the interior is the Agujas Grandes volcano. A mountain of 226 meters of altitude very accessible ideal to caress with the glance the limits of the island. Some of the best beaches of the Canary Islands are hidden here. 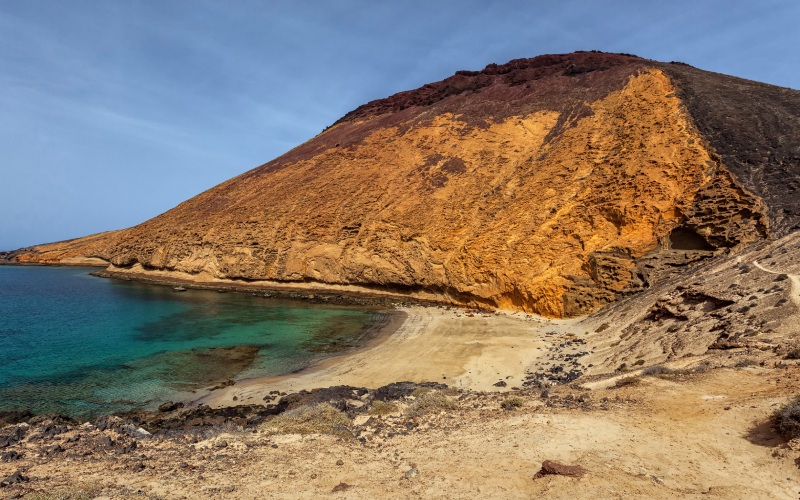