Cabrales cheese is a blue cheese made in Asturias with pure, unpasteurized cow’s milk; or with a mixture of two or three kinds of milk (cow, sheep and goat). It is a fatty cheese with a minimum ripening period of two months and we can differentiate it in the market because it is wrapped in green aluminium foil.

Cabrales cheese needs to be aged in deep caves, with two openings to the outside so that a current of air can be established inside, called a blower (“soplado”). It must also have a current of water to maintain high humidity and low temperature. Thanks to these conditions, the Penicillium roqueforti molds can grow. Its spores come into contact with the cheese, invading it completely, which is characteristic of this product.

After two to five months of aging, a cylindrical cheese is obtained; with a soft and thin grey rind with reddish-yellow areas. The paste is unctuous, compact and without holes, white in colour with blue-green areas. Its taste is slightly spicy, more intense if it is made with goat’s or sheep’s milk, or in a mixture.

We find references to Cabrales cheese in 18th century documents by Jovellanos; also in 19th century documents such as Madoz’s Geographical Dictionary or in “Memorias Asturianas” by Gonzalez Solís. Later, in 1911, the Alvarado brothers describe their journey to the shepherds’ caves where this famous cheese is made. How this cheese began to be made is not clear; but there is a legend that tries to shed light on the matter. It is said that a shepherd who was milking his cattle fell in love with a girl who was passing by; left the milk in a nearby cave and followed her. When winter came and there was a food shortage, the shepherd remembered the milk forgotten in the cave, went to get it and discovered that it had been transformed into Cabrales. 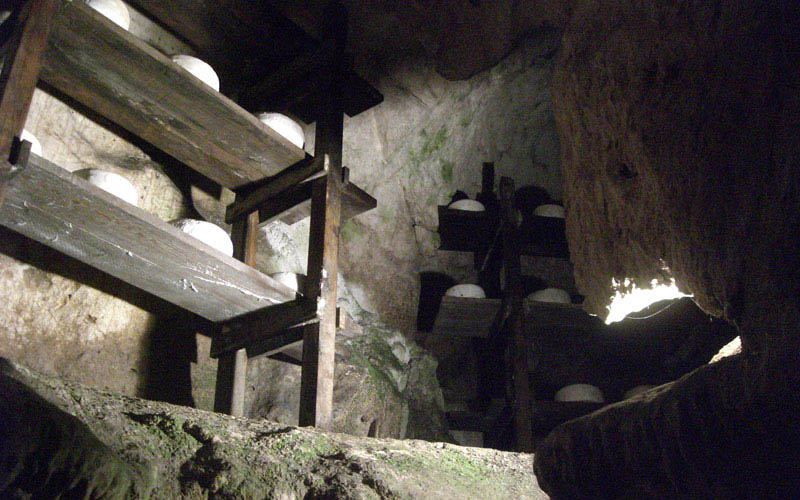 The production area includes the Cabrales Council and some bordering villages. This area, located in the Picos de Europa, has a very peculiar relief that allows the existence of caves and caverns, which are between 800 and 1200 metres high. The hyper-humid climate with high rainfall, together with the characteristics of the caves, are the ideal environment for the growth of the mold that makes it possible to make this cheese.

Ibores Cheese, the Designation of Origin from Extremadura
Spain has a long tradition of cattle, goat and sheep farming. This important sector gave Más información

Arzúa – Ulloa Cheese
The designation of origin Arzúa - Ulloa cheese is a cheese made from natural, whole, Más información

Idiazábal Cheese, a Designation of Origin from the Basque Country
Idiazábal cheese is a fatty cheese made exclusively with raw milk from Latxa and Carranzana Más información