Spain’s National Day takes place on October 12, in a day full of events where national institutions are very much present. The most famous of these is the military parade, presided over by the king, in Madrid. According to the Act establishing this holiday, commonly known as Día de la Hispanidad, its purpose is to “remember the different moments of collective history that are part of our common historical, cultural and social heritage“.

On the same day, other very typical celebrations in Spain also take place, such as the Fiestas del Pilar in Zaragoza or the Reina de la Hispanidad in Guadalupe, Extremadura. But the 12th October does not close borders and goes beyond the Atlantic; where several places in South America also celebrate the Día de la Hispanidad. A coincidence that makes one wonder about the origin of such a commemoration.

Origins of the National Day: the encounter between two worlds

It is difficult to overlook the fact that Día de la Hispanidad commemorates the arrival of Christopher Columbus on the American continent on October 12, 1492. This was a date that marked a before and after in the history of both Spain and the planet. Not for nothing did it bring contact between two totally different worlds: Europe and America. 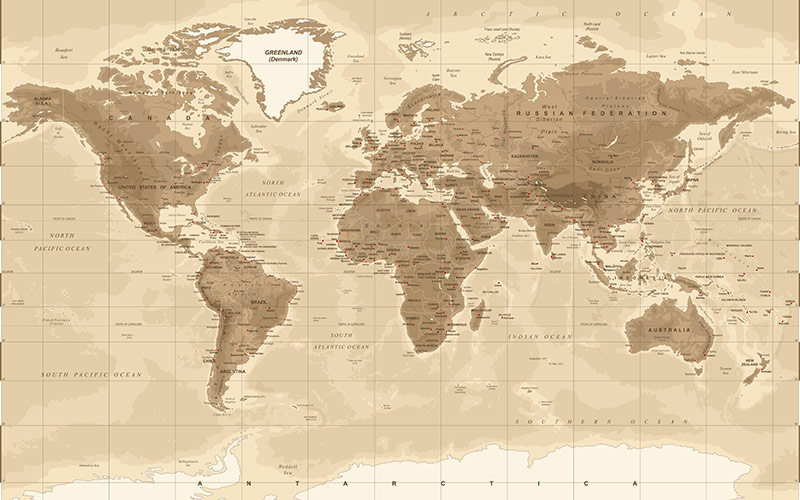 The encounter between two worlds. | Shutterstock

This historical event is commonly known as the discovery of America. However, the term “discovery” has not been free of controversy in recent decades. This is a concept that tends to suppress the existence of a territory and a civilisation prior to the arrival of the European conquerors. Throughout the 20th century, the date of October 12 was gradually institutionalised as an attempt to make claims associated with nationalist values and pride; as seen from Eurocentrism, which were the European roots of civilisation.

Far from such negative connotations, this date is now regarded as the meeting between two worlds through a holiday that has developed over time. October 12th is of great importance in the Hispanic world and its significance goes beyond the Iberian Peninsula. Since the last century, many Latin American countries have also joined this celebration. Although each one calls it by a different name: Discovery of the Two Worlds Day (Chile), American Cultural Diversity Day (Argentina), Indigenous Resistance Day (Nicaragua and Venezuela). The UN has also joined this celebration by calling it Spanish Language Day.

Background to the National Day in Spain

It was on the 400th anniversary of the “discovery”, in 1892 and under the rule of Queen Maria Christina, that a Royal Decree proposed to make this event coincide with the celebration of the National Day. Since then, every October 12th, commemorative dialogues have been established between the Hispanic peoples. These had political, religious, historical and artistic themes. 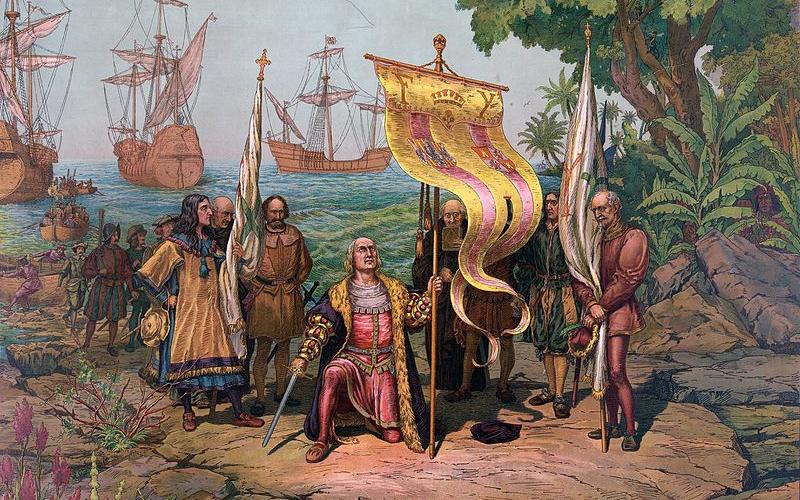 Christopher Columbus seized Guanahani in the name of the Catholic Monarchs on October 12, 1492. | Wikimedia

The first time that October 12 was proposed as Día de la Hispanidad was in 1935; during the government of the Second Republic. Although it was not until 1958 that the day was officially established as a holiday. Under Franco’s dictatorship, it was originally called “Día de la Raza” (Day of the Race); with a symbolism very close to the ideas of the regime and a celebration similar to that of the National Labour Day on July 18. Curiously, this name predates the dictatorship and was the most common name in South America for the occasion until recently.

With the arrival of democracy in Spain, the debate arose as to whether it was appropriate to change Spain’s National Day to December 6; the date on which the recent 1978 Constitution was approved. However, the 1987 Act definitively established October 12 as the holiday associated with the Discovery.

Several names for the same celebration

Since October 12 was established as a national holiday in 1892, several denominations have followed one another throughout the 20th century, taking into account the context of political domination. During the Spanish Restoration (1875-1902), the notion of Hispanidad acquired its formal expression. This highlighted the value of universality that allowed the unity of Spain and America based on the language, religion and culture inherited from the empire. 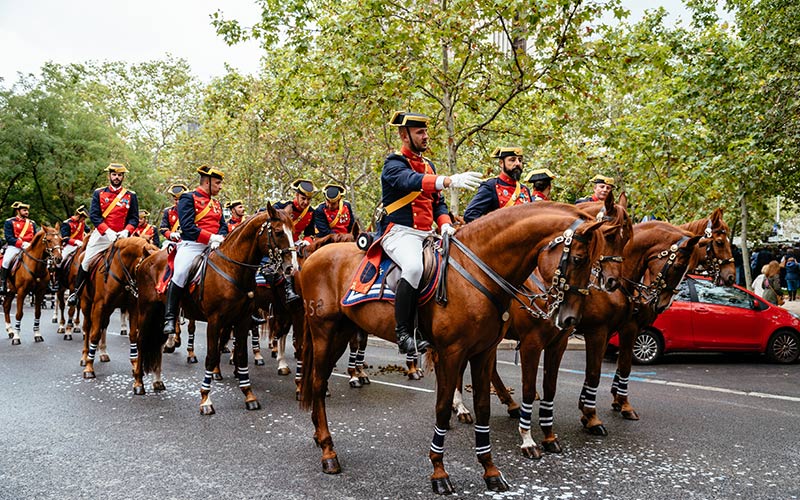 In any case, in Spain the designation “Fiesta de la Raza” was originally chosen. A proposal made by the President of the Ibero-American Union and former Spanish Minister Faustino Rodríguez-San Pedro in 1913. In this respect, the concept of race weighed on the formation of a category of Hispanic “being”; considering cultural and symbolic components of ethnic groups.

The term Hispanidad was recovered in the 1920s and 30s thanks to the priest Zacarías de Vizcarra. The contribution of the intellectual and Spanish ambassador to Argentina, Ramiro de Maetzu, was also key. In 1935, the first celebration of Día de la Hispanidad was held, and it remained so during the dictatorship. However, the decree signed by King Alfonso XIII in 1918 remained in force for more than forty years. It established the name of “Fiesta de la Raza”. Finally, in 1958, this confusion was corrected by changing the name of the holiday to Día de la Hispanidad. 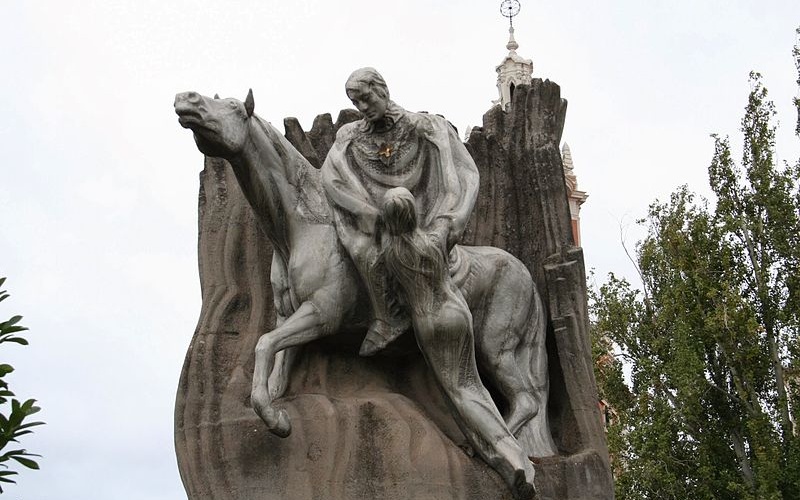 Monument to Hispanity in front of the Museum of America in Ciudad Universitaria. Work of Agustín de la Herrán. | Wikimedia

Although the celebration of October 12 is now commonly recognized as Día de la Hispanidad, the 1987 Act abolished it definitively and replaced it with Fiesta Nacional de España. According to the BOE, the date chosen “symbolises the historical event in which Spain, on the verge of completing a process of building the state on the basis of our cultural and political plurality, and the integration of the kingdoms of Spain into the same monarchy, begins a period of linguistic and cultural projection beyond European borders”.

Military parade and tribute to the national flag 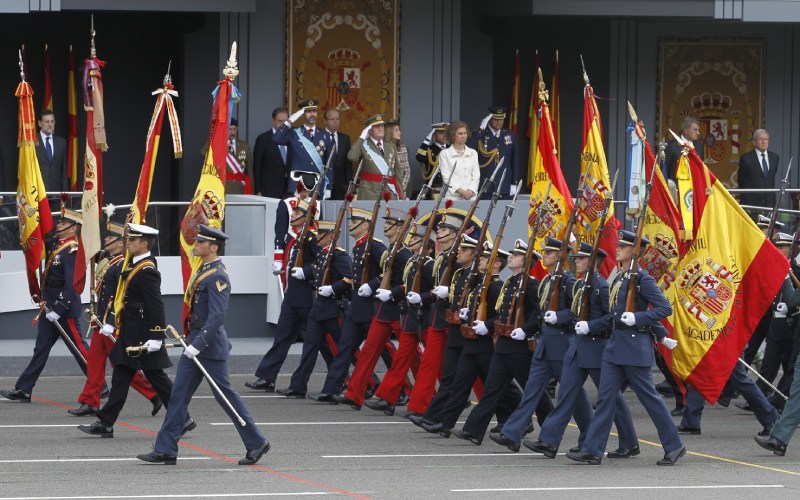 Military parade on the day of the Fiesta Nacional. | Wikimedia.

Although it is a national holiday throughout the country, the most important event is held in Madrid. Traditionally there is a military parade and a tribute to the national flag. It is attended by the king, the royal family and the most important representatives of all the powers of the state and the autonomous communities.

Virgen del Pilar Day, patron saint of Aragon and of the Civil Guard 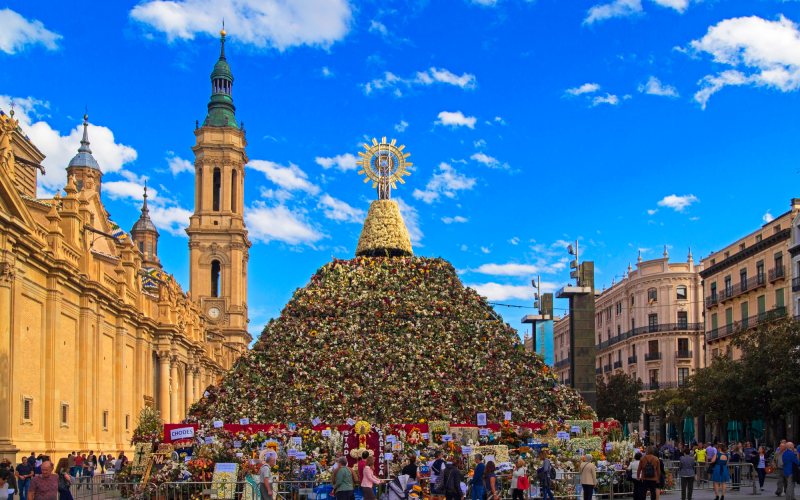 October 12th is also the Day of the Virgen del Pilar, patron saint of Zaragoza and the Community of Aragon. The city celebrates its patron saint’s day on the same day with all kinds of religious, recreational and cultural activities. There is a mass in the Basilica del Pilar, a flower offering to the Virgin, a proclamation from the balcony of the town hall, a fair and shows. She is also the patron saint of the Civil Guard and other bodies.

But the Fiesta del Pilar has nothing to do with the discovery of America. It is a coincidence that Christopher Columbus set foot on the same day as the patron saint’s celebration. Since then, both festivities coincide on the 12th of October. 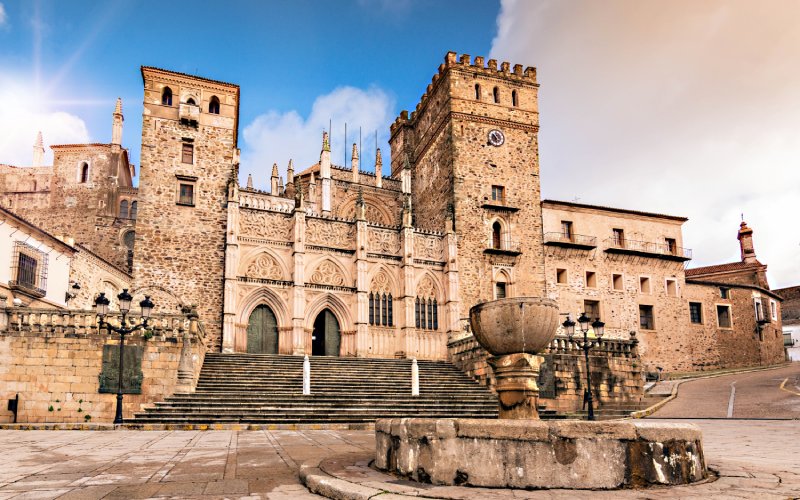 Although the Virgen del Pilar is not directly related to the National Day, Santa María de Guadalupe de Extremadura is. She has held the title of Queen of Hispanidad since October 12, 1928; when she was crowned by King Alfonso XIII. Since then, Guadalupe has celebrated the annual Fiesta de la Hispanidad. For example, there is a reminder of this coronation through a series of acts that culminate in the reception of a great parade.

Aragón, Extremadura, history, madrid´
It may interest you...