An impassable castle and pontifical seat

This rocky peninsula, birthplace of King Wolf, was occupied by all the former civilizations that ruled over the Mediterranean. Its fortress was home to two schismatic popes. The festival devoted to the patron saint of the locality, the Parish Virgin, is held every year since the 17th century.

Things to do in Peñíscola often involve its beach and observing the town’s magnificent architecture from the Middle Ages. You must not miss the Templar castle, the basilica and the walls surrounding the old town (a visit that can take you a day to complete). One of the main tourist attractions is the Irta Mountain Range and some options to practice active tourism. Among the surrounding areas, we recommend paying a visit to Catí, San Mateu and Benicarló.

To understand what you see in Peñíscola, it is useful to know its history first. The sites of Poaig and Els Barrancs, inhabited by the Ilercavones between the 7th and 6th centuries BC, date from the Iberian period. The Phoenicians from Tyre (in present-day Lebanon) also settled there.

In the 4th century B.C. the Latin poet Rufo Festo Avieno in one of his texts names the city Quersonesos (Peninsula). After the Roman occupation -in which its present name arises- and the Visigothic domination, at the beginning of the 8th century the Muslims call it Banáskula. It means “impassable castle facing the sea”.

In 1124 the troublesome Ibn Mardanis, also known as King Wolf, was born there. He was king of Murcia and rival of the Almohad Empire. He came to control much of the Levant and Andalusia. When Burriana fell in 1233, Peñíscola became isolated. Thus, the king Jaume I agrees with the literary Alí Albatá the delivery in exchange for that the Muslims preserve their properties and traditions.

Nevertheless, in 1251 the same king will grant the letter of population of Valencia what meant the dispossession and departure of the Muslims. It was given to the Knights Templar. Between 1294 and 1307 they built the castle and placed the heraldic coats of arms of their leaders on the doors of the castle and the basilica.

When the Western Schism occurred, Pedro Martínez Luna – known as Pope Luna – settled there on 21 July 1411. He turned the place into the Pontifical See, rivaling those of Rome and Avignon, a unique landmark in the history of Peñíscola. The Pope transformed the castle into a palace and installed a library.

His successor would be the Aragonese Gil Sánchez Muñoz, known by Clemente VIII, who would govern between 1424 and 1429 and his resignation would end the Western Schism. When he died, the square became part of the Crown again.

In 1521, during the uprising of the Germanías, Peñíscola remained faithful to the king Charles I. It was rewarded with the title of “Fidelísima“. To defend it from the incursions of the corsairs, in 1578 the construction of the walls of the city would be finished by Giovanni Battista Antonelli. 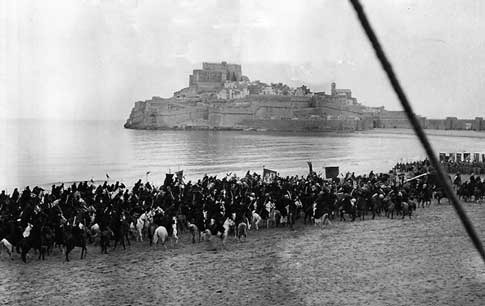 Shooting of the film El Cid, directed by Anthony Mann in 1961

At the beginning of the War of Succession (1705) the governor of the square, Sancho de Echevarría, remained faithful to the king. That is why for two years it was besieged by the English and the Dutch. Thus, the famous Battle of the Trenches took place. King Philip V awarded Peñíscola the title of “Very Noble, Loyal and Faithful City” and ennobled all its authorities. Sancho Echevarría would build the church of the Virgen de la Ermitana, patron saint of Peñíscola.

In February 1812 the stronghold was besieged by the French from Suchet. Garcia Navarro handed it over almost without a fight. It would not be reconquered by General Elío until two years later. At the end of the 19th century, the phylloxera epidemic destroyed its vines, which were replaced by carob, olive and almond trees.

During the post-war period, Peñíscola became a film set. Many filmmakers shot their films in the city. For example, Calabuch (1956) by Luis García Berlanga, or the great film El Cid (1962) by Anthony Mann.

What to see in Peñíscola

We start our visit in the Templar Castle, built between the years 1294 and 1307 upon the remains of and old Muslim fortress. Pope Benedict XIII turned into one of his Palaces, and during the kingdom of Philip II, it was adapted to hold some artillery on its walls. It holds inside the interesting Body Guard and the Basilica, where Pope Luna was buried.

The old town is surrounded by walls divided into three main areas, highlighting the ones built by Antonelli in 1578. He also built the inextinguishable Font de la Petxina. The fortress was accessed by three main entries: the Portal Fosc (dark gate), Renaissance style, almohad decoration, made by Juan de Herrera; Portal de Santa María, ordered by King Fernando VI in 1754 to connect it with the famous Santa María Plaza; and Portal de Sant Pere, built to order by Pope Luna during the 15th century. 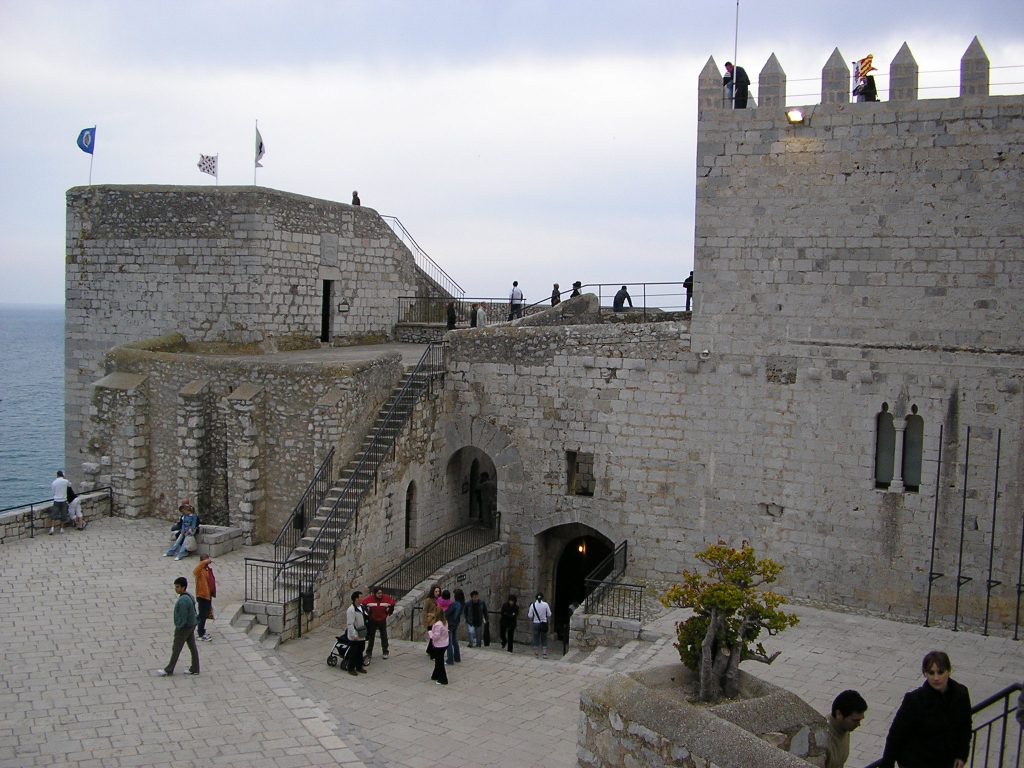 In this area we also highlight the Santa Ana Hermitage (1827) and Font de Dins, the main water resource during the sieges of the town. The Santa María Parish Church (1234) has Gothic elements; it also hides treasures such as the cross for processions, Clemente VIII’s reliquary, and Pope Luna’s goblet, and the famous image devoted to the Parish Virgin granted by King Jaime I. the Ermitori of the Mare of Dèu d’Ermitana was built to hold the image between the years 1708 and 1714. Another interesting sight is the Plaza de Armas, where folk dances are still practiced during the processions on the second week of September. 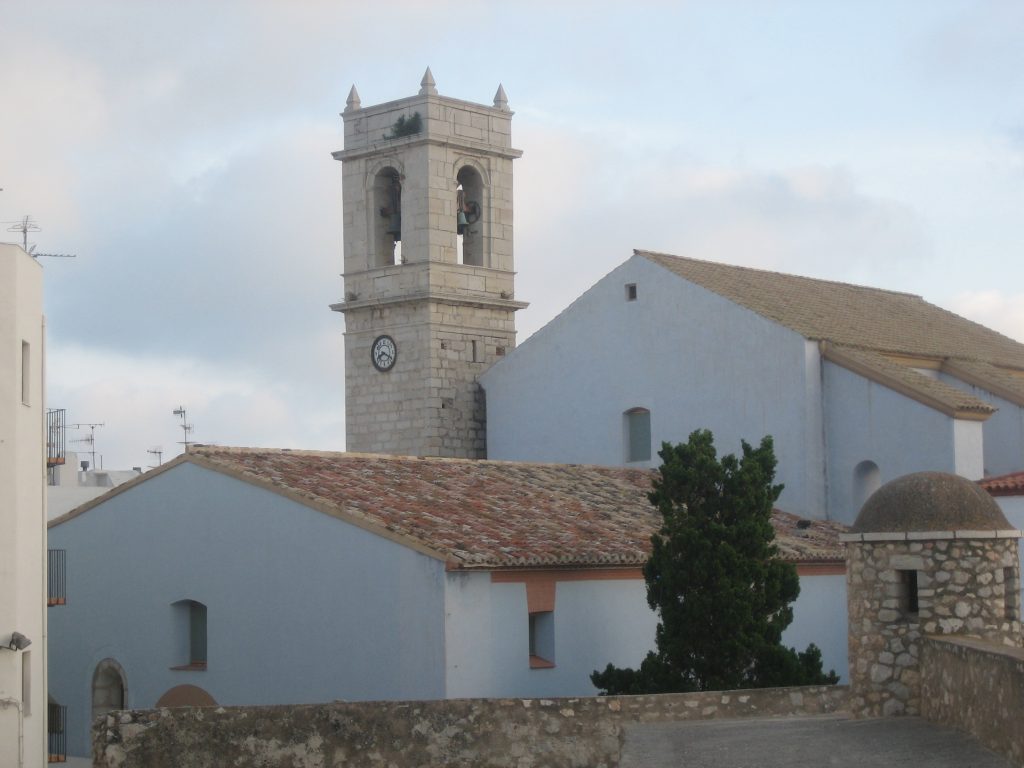 Places with a lot of history

If you want to see an original natural piece, you had better visit the Bufador: a seven-meter height natural erosion open to the sea. If you place yourself in the corner the wall indicates, you will be able to discover all the secrets this spot hides.

We recommend the balconies full of flowers at Casa de las Conchas, framed by the white and blue houses. The old fishing port La Porteta was modernized between the years 1922 and 1925. There you can take the embarkations called ‘golondrinas’ (swallows) to enjoy a view of the coast. The lighthouse built in 1892 and its light reached 35 miles (65 km). The Sea Museum explains the history, archeology, fishing and marine life, with exhibitions of mockups of ships, graphics, videos, fishing material and three aquifers with Mediterranean marine species. 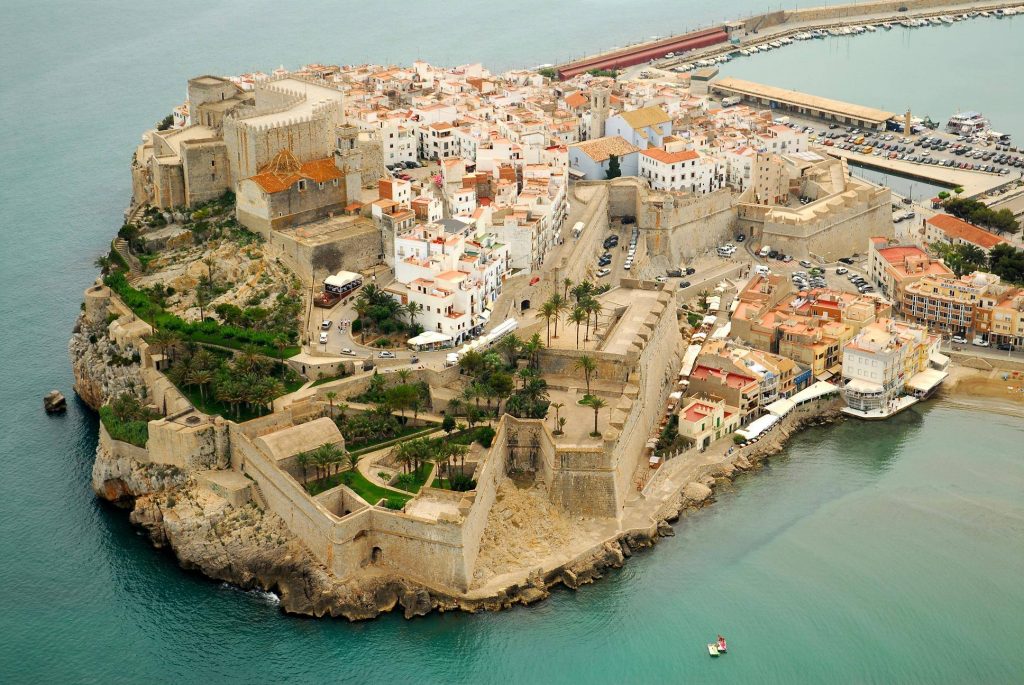 Irta Mountain Range blends with the cliffs and deserted bays. In this area you should visit the Ermitorio of San Antonio and the medieval watchtower.