Diana's city and a Taifa kingdom

Denia’s promontory, presided by its castle, has been home to many powerful civilizations over the last three thousand years. The warm weather and the soft winters are so appreciated by the inhabitants of this town that they even built a monument in honor of this amazing weather. Besides the beaches of Denia, this town is good for any kind of plans.

Plan your stay in Denia

Things to do in Denia normally involve sunbathing on the beach and visiting the town’s historical center, which includes a Muslim castle, San Antonio church and interesting museums. Sightseeing the main spots can take us a complete day, so you could try to visit some of the surrounding areas as well: Marjal de Pego Oliva natural park, Gandía, Calpe, Ifach Rock natural space, or the Mariola Mountain Range natural park.

We start our visit in the Muslim castle, located on a hill that you need to climb taking a tourist train which departs from the train destination, or on foot from the Contitution Plaza via the streets of the old muslim quarter and the current Hospital, Brecha and Cid streets. In this way, you will get to the Portal of the Vila, built by the Almohads in the 12th century, and flanked by the Red Tower (15th century) and the Cos Tower (12th century but remodeled in the 16th and 17th centuries). The Consell Tower (15th century) is named after the fact that the council gathers there for their meetings.

The paved road goes through the area of the Christian Vila Vella up to the Governor terrace and the Governor Palace (16th-17th centuries), where the Archeological Museum is located: permanent exhibitions where one can learn about the Iberians, Romans, Muslims and Christians who ruled over these regions. Among the numerous pieces of the museum, we highlight the flask for balsam representing the god of Mercury (2nd century BC), the collection of Muslim bronzes from the 11th and 12th centuries, the ceramics legacy of al-Andalus and the Rotes’ Treasure from the 15th century. This place is the scene of concerts and the Moors and Christians festival. By going through the Portal of the Baluart (18th century), you can go down to the Punta of the Diamant bastion. A little bit further, you can see the water tank in case a siege takes place. 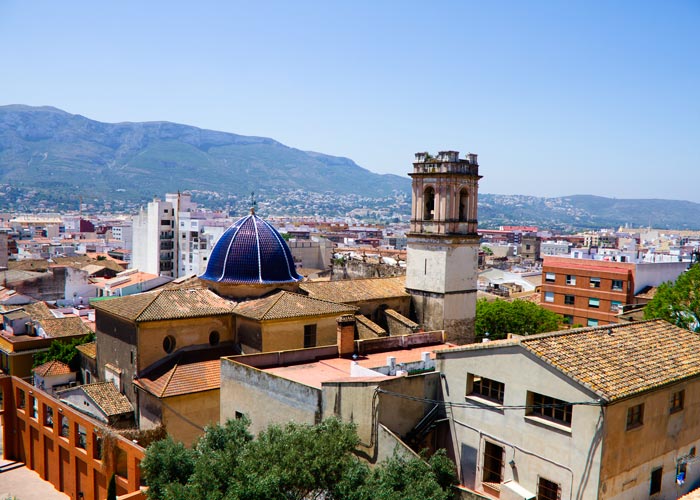 Back to the Constitution Plaza, we recommend going to the Asunción church (Baroque style from the 18th century). The image of the Virgin of the Asunción stands out in the altarpice, together with the image of the Saint Vicentes, Ferrer and Mártir, patron saints of Valencia. Do not miss the frescos inside the dome (18th century) with representations of the Evangelists and the Holy Fathers of the western church. You can also visit the Town Hall there (12th century, neoclassical style) with some Roman inscriptions in the façade that belong to the Dianium Forum. A plaque commemorates the arrival of Cervantes to Denia’s port after his captivity in Algeria.

Via Cavallers street you will have access to the Ethonological Museum, located in a mansion of the 19th century, where some dresses, work tools, and utensils from the golden period of raisins export, which enriched the bourgeoisie from the region. In Loreto street you can visit the Agustinas or Our Lady of Loreto Convent (1604) financed by Felipe III.

Buildings linked to raisin production are very interesting: Morand Warehouse in Carrer del Mar and Cooperative Wholesale Society in Carrer Cándida Carbonell. The latter building is next to Sant Antonio church (16the and 18th centuries).

We highly recommend going to Marqués of Campos street, the oldest street in the town, to see Denia’s real atmosphere, and from there to go to the L’Estaciò Art Center (via Cándida Carbonell and Calderón streets), which has temporary exhibitions and the Toy Museum, a collection of metals and wooden toys.

The Commerical Port is normally crowded; it is the departure point for many tourist embarkations offering coastal activities, and also the link to Ibiza thanks to the ferry. If you continue walking, you will find the Fish Market, where you can buy the best fish from 5pm onwards. The Cervantes Terrace has a bust which remembers that this town was the first land in the Peninsula walked on after his captivity in Argelia. Also, you can see there the famous Tribute to the Climate, annual average of 20 degrees Celsius, represented by a female figure. The Old Atarazanas or Drassanes building (16th and 17th centuries) is now a four-star hotel.

The Sports Port is located in the Bous to the Mar Monument, which commemorates a festival which gives name to the sight, and the Monument to the Sea. The Baixa to the Mar Quarter, full of low-lying fishing houses and narrow streets, is worth a visit. In the outskirts of the town you can find the Gerro Tower (17th century), next to the Santo Antonio cape, declared Marine Reserve. On the road, heading to Jávea, you can visit the Montgó Natural Park.

Things to Do in Alpuente
[vc_row][vc_column][vc_custom_heading text="It was the capital of a Taifa kingdom and Carlist Bastion" font_container="tag:h2|text_align:left|color:%23000000" google_fonts="font_family:PT%20Sans%20Narrow%3Aregular%2C700|font_style:700%20bold%20regular%3A700%3Anormal"][vc_column_text]In the Más información

Spanish Castles In Film
[vc_row][vc_column][vc_column_text]There are numerous Spanish castles from movies that have been featured on the small screen. Más información