The village of Quel owes its name to the Arabic word qalat, which means fortified place, from where also comes for example Alcalá de Henares. This is not surprising, since this village is guarded by its imposing castle from the top of a steep hill, the so-called Peña de Quel. Its castle will be one of the essential visits to see in Quel. This beautiful village is situated at 492 metres above sea level in the autonomous community of La Rioja, in the region of La Rioja Baja.

The river Cidacos comes from its neighbouring village Arnedo and flows into the river Ebro. Quel is very well located to make routes by the nearby park of Peñas de Arnedillo, Peñalmonte and Peña Isasa or to visit Calahorra. Dinosaur enthusiasts can travel south to Enciso to take the “route of the dinosaurs”. 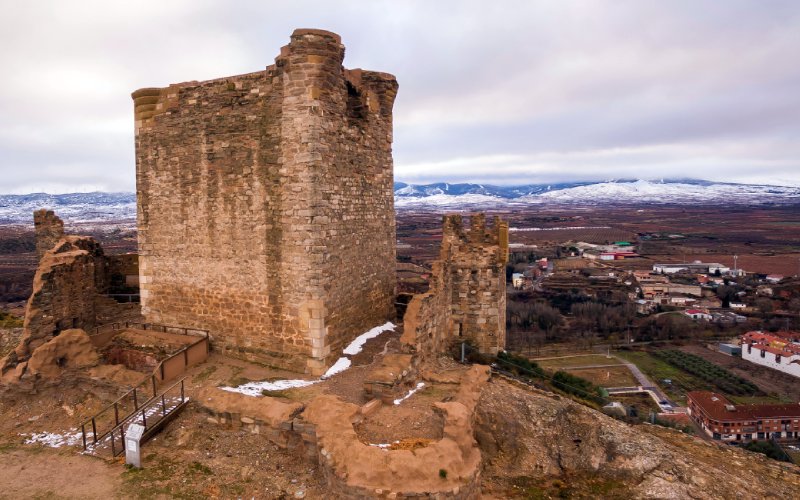 Castle of Quel during winter. | Shutterstock

The castle of Quel is located next to the town centre on the heights of the vertical Peña de Quel. There is no certainty about the origin of this ancient fortress, of Arab or Roman origin, but whose current remains date from the 15th century, between 1470 and 1480. Between 2010 and 2012 the Town Hall of Quel carried out rehabilitation and recovery works. During the excavations several archaeological fragments were found, such as plates, jugs and pitchers. Also an arrowhead and several coins from the 15th, 16th and 17th centuries. It should be noted that the visit is free and can be reached both on foot and by car.

Its rectangular, three-storey, homage tower, which served as a watchtower over the entire Cidacos valley, is particularly noteworthy. Two square towers were used for adarve and battlements. The first floor of the central tower housed the private rooms where they slept and kept their valuables. Meanwhile, the second floor was known as the weapons room and stored armorial bearings or crossbows. Finally there is the third floor, which was used as a kitchen and a temporary room for the members of the garrison. 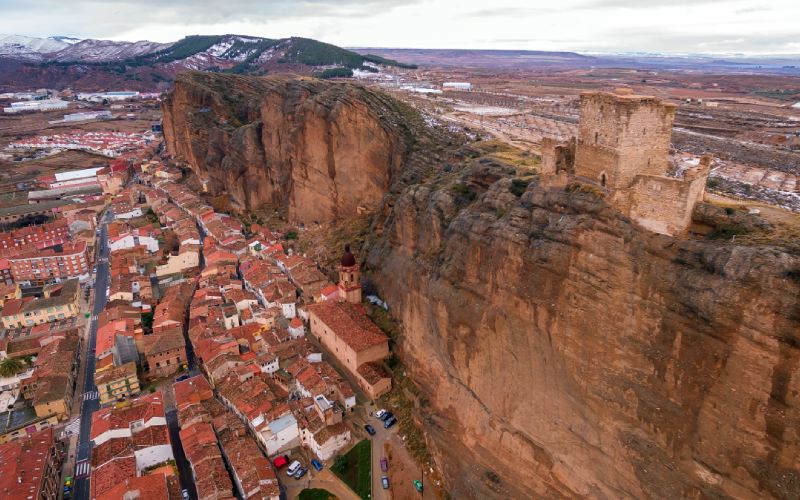 One of the main attractions of the castle of Quel are the beautiful views both towards the river Ebro from the back of the castle. The views of the Cidacos valley are also remarkable. With these views it is not surprising that in the past they were used to communicate in case of danger with other nearby fortresses, such as the castle of Autol and the castle of Arnedo. From the Cidacos viewpoint we can contemplate an impressive perspective of the town, where we can see the Barrio Bodegas or the Santo Cristo de la Transfiguración hermitage. 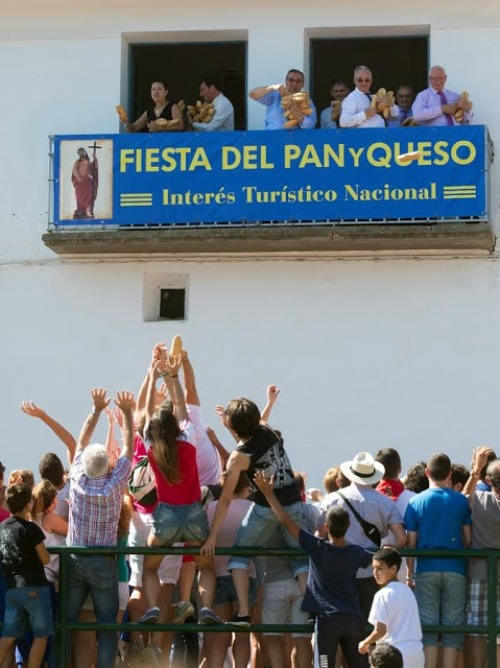 The tradition of Bread and Cheese has been celebrated every August 6th for more than 500 years. The origin of this festival dates back to 1479, when the plague epidemic of that year took the lives of most of the inhabitants of the town. Only 17 of the 50 residents survived. The survivors made a procession from the church to the hermitage with thirteen candles, representing 11 saints, the Virgin Mary and the Holy Christ. After the procession, the death from the plague ended. It is said that only two or three more neighbors died. This fact was attributed to a divine miracle. In gratitude, a brotherhood was founded that commemorates the procession annually.

The pilgrimage culminates with a lunch of bread, wine and cheese for the 13 members of the Brotherhood at the hermitage. From the balcony, they share with the rest of the neighbours the throwing of Bread and Cheese. Quantities thrown from the hermitage are not negligible, as they usually reach 2,500 portions of bread and about 60 kilos of cheese. 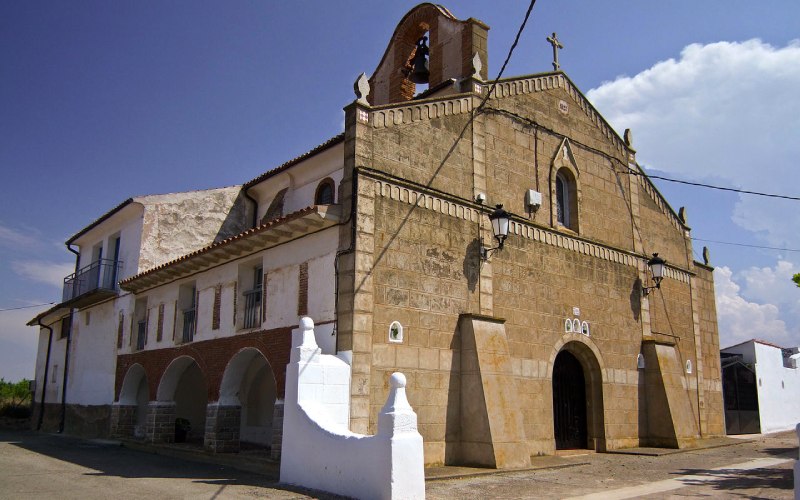 Main façade of the Hermitage of La Transfiguración. | Wikimedia

The hermitage of El Cristo de la Transfiguración de Quel was built in the 18th century in brick, following the baroque fashion. It consists of a nave with five sections and an octagonal head. Its semicircular arches and groin vaults contrast with the barrel vault in the first section and the flared vault in the chancel. Among its artistic treasures is the image of the patron saint, the Resurrected Christ, from the 17th century. Also outstanding is the crucifix, which dates from the 18th century and has a Baroque style.

From one of the side façades of the Cristo de la Transfiguración hermitage the traditional distribution of Bread and Cheese is carried out, which is the biggest celebration in this village. Years ago it was fitted out to host the main landmark of the festival, as well as improving the surrounding green areas. 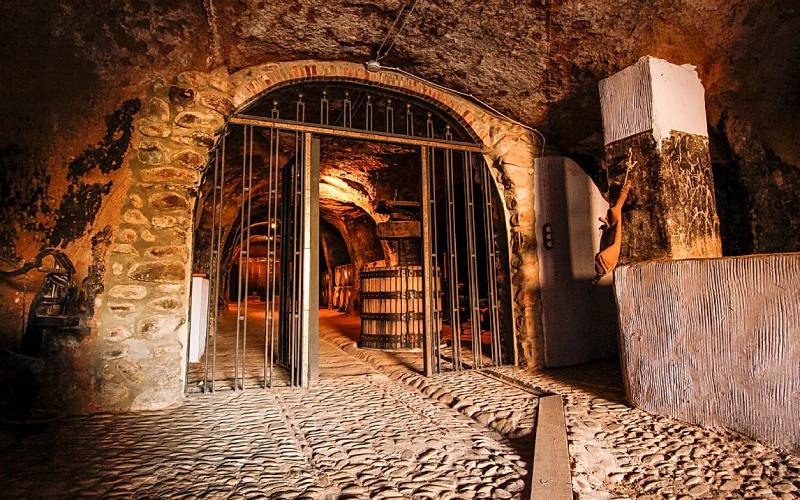 One of the cave-warehouses in the district. | Barrio Bodegas Quel

There are various routes through La Rioja based on its wine, one of the best known in the country. The Barrio de las Bodegas is associated with this aspect of the region. It is located outside the town centre, on the right bank of the River Cidacos. On the hillside, a series of family wine-caves were built by digging in the terrain. A tradition that can be seen from Guadalajara to the Sacromonte of Granada. In this way, ideal environmental and temperature conditions were achieved for the production and conservation of the wine.

Manuel Bretón de los Herreros (1796-1873), a Quelian playwright, said that “in his Quel there were as many wineries as there were neighbours“. A walk through this district reveals the wisdom of the writer’s words.

34 kilometres long, this greenway starts in Calahorra and ends in Arnedillo. It runs along the old narrow gauge railway track; passing through the villages of Autol, Quel, Arnedo, Herce, Santa Eulalia and Préjano. It is a splendid and healthy hiking route that follows the route of the Cidacos River, which allows you to enjoy one of the natural parks of La Rioja. 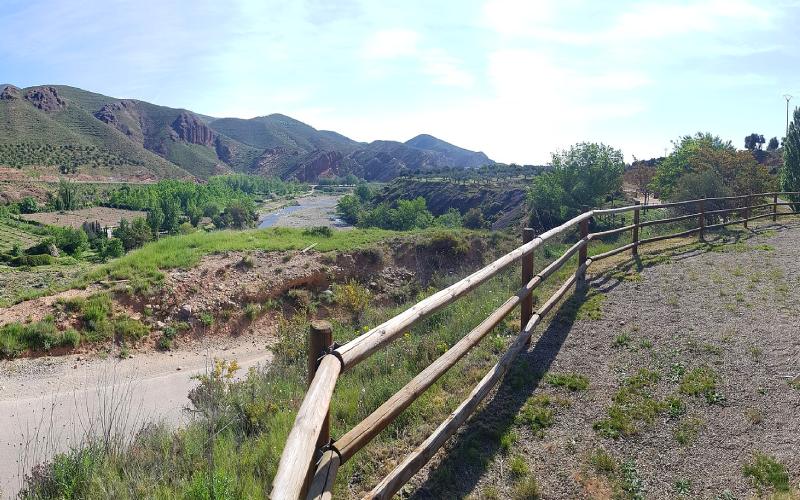 Route of the greenway near Arnedillo. | Wikimedia

It is of an easy level of difficulty that allows the route to be done on foot, by bike or on horseback. This green route connects with the Préjano Greenway and the Ebro Nature Trail GR.99. The road surface is mixed, varying between asphalt and compacted gravel. 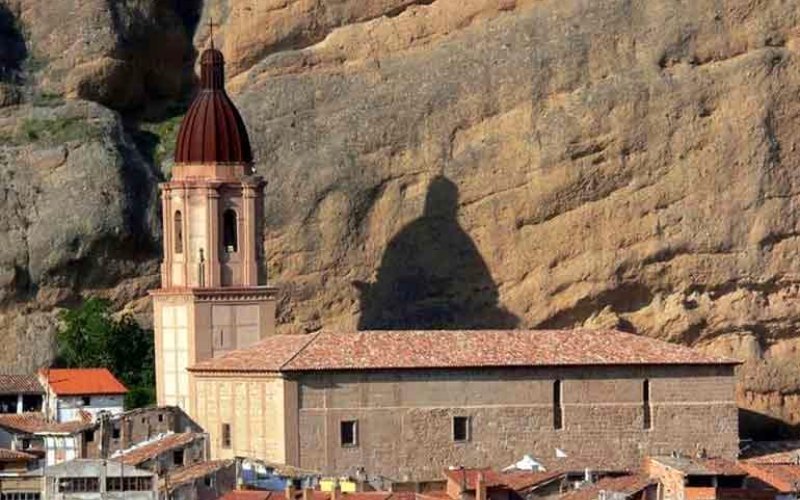 Finally, among the points of interest to be seen in Quel should be included the Church of El Salvador. This late Gothic building is located next to the town hall. It maintains Renaissance elements but the most outstanding of its figures is the main wooden altarpiece. It contrasts its baroque style in the attic and classicist in the body. In the 18th century the sacristy and the main body of the tower were built.

From this church the procession of the Brotherhood of La Transfiguración de Quel starts every 6th of August. Part of the most typical festival of this Riojan town, as has been said, ends in the chapel with the throwing of Bread and Cheese.

Except during the festivities, there is no parking problem in the town centre.

Feast of the May Cross, May 3. Bread and Cheese Festival, August 6.