A Coruña can be proud, among other things, of the longest urban promenade in Europe. Over 13 kilometres long, the promenade runs parallel to the ocean’s edge, where walkers, joggers and cyclists can enjoy its monuments, sculptures and beaches. This promenade is a must in A Coruña, specially due to its castle of San Antón where you can admire the breath-taking  views of the Atlantic Ocean.

Two aspects to take in consideration at the beginning 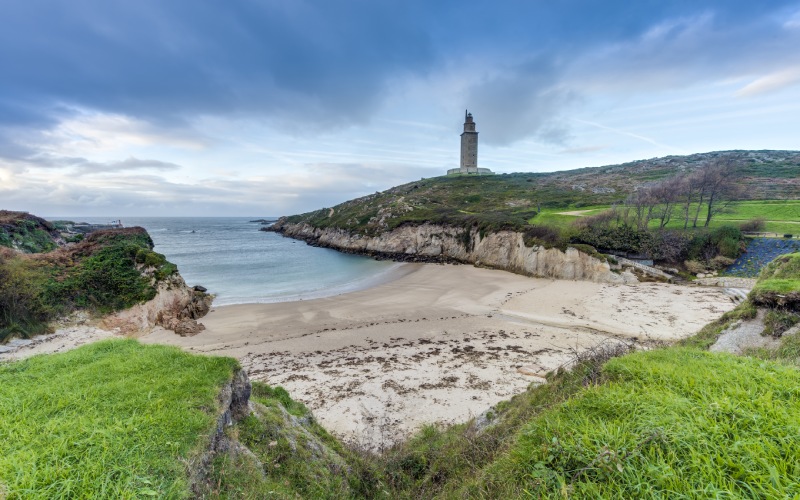 The starting point of this promenade in A Coruña is the castle of San Antón, now the Historical Archaeological Museum. It was built in the 16th century and, jointly with the castles of Santa Cruz and San Diego, made up a strong defensive fortress when attacks by sea were constant in the Galician city.  When this was not a problem anymore, it had others roles from a prison to a lazaretto, where illness or suspected sailors were admitted. Besides, it was declared a Historic-Artistic Monument in 1949.

On the other hand, there are some aspects to take into account if you want to enjoy this nice walk. Firstly, the lampposts along A Coruña’s seafront promenade tell stories, but how? They are inspired by the modernist movement and their shapes contain details of the city’s history, which are also related to the place where they are located. For example, those located around the Tower of Hercules have reliefs that remind us in the Roman lighthouse and its history.

On the other hand, the second warning: the beaches. Visitors may want to pay attention to many of them, as they will walk along popular places such as Riazor beach or Las Lapas beach, where you can see the Tower of Hercules from the sand, a spectacular sight.

The stops during the walk 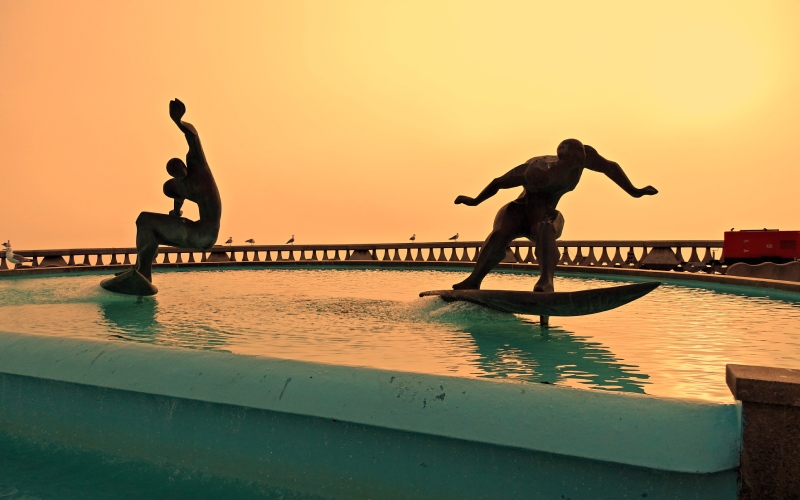 There are many places to visit. For example, the cemetery of San Amaro, which is considered one of the oldest cemeteries in Europe. Its construction began in 1812, when burials were banned inside the city. There are several monuments which stand out, such as ‘los Mártires’ (the Martyrs), that was built to honour of leaders of the 1901 general strike, considered the beginning of the Galician workers’ strike movement.

A very special spot is the Surfers’ Fountain, located between Matadero beach and Orzán. It is dedicated, of course, to lovers of this sport. These sculptures look like the perfect postcard, with the rays of sunlight and the fictious waves. However, there is another place which has a similar landscape: the Millennium Obelisk. It is almost 50 metres high and is made of steel and glass, so the sun also plays a central role.

Another of the favourite spots on A Coruña’s seafront promenade is the Octopus sculpture:  two metres high and three metres wide. It is made up of small ceramic pieces that also depend on the sun for its appearance. This sculpture is also a preview of all that is to come: the sculpture park of the Tower of Hercules, consisting of 18 sculptures. These figures have a mythological or maritime theme, so that there are references to the founding of the lighthouse and the hero Hercules, as well as symbols that speak of the close relationship between the Galician people and the sea.

Last but not least: the Tower of Hercules. A World Heritage Site since 2009, it is the oldest lighthouse in the world which is still working. We have already commented previously on one of the most important monuments in Spain.

A window to the Atlantic Fiestra Aberta ó Mar, this is the Galician name for this work by Francisco Pazos, located in the town of O Portiño, at the end of the longest promenade in Europe. It is a window where you can contemplate the Atlantic Ocean in front of the islands of San Pedrois the last stop of this incredible walk. It is well worth coming here to gaze at the sea, the sunset, or its strongest swell.

A Coruña, Atlantic Ocean, churches, Galicia, promenades
It may interest you...