A village with their own dialect and far from everything

This is possibly the most isolated town in Spain, located in the Sierra de Gata and bordering Salamanca and Portugal. This geographical isolation may explain why it has an old town far from all the stereotypes of Extremadura. It also conserves its own dialect, A Fala, which has been declared an Asset of Cultural Interest.

Its location between the Gata and Malvana mountains means that it almost always takes a considerable amount of time to reach this place. Such isolation can be seen in the architecture, the language and the low number of visitors. It is not a typical tourist destination. There are no other tourist destinations within a short distance, so those who go there only go there. Therefore, trips to additional towns are not recommended. Thus, the ideal is to prepare a getaway of several days to enjoy the atmosphere and what to see in San Martín de Trevejo.

A funerary stele now on display at the old Tourist Office confirms that the town was already inhabited in the Final Bronze Age. Romans also left their mark on these lands, as can be seen from the road that winds through the mountains. The population would later be occupied by the Berbers. They were the ones who left the techniques of cultivation, so important for the economy of the Sierra de Gata.

The area was reconquered by King Ferdinand II of León in the 12th century. In order to defend it, he gave it to the Order of Saint John of Jerusalem in 1184. This date is considered to be the historical foundation of San Martín, which would be born as a village of the Encomienda de Trevejo. Given the winemaking tradition of the area, it was originally called San Martín de los Vinos. The name changed to San Martín de Trevejo when the charter was drawn up in 1230 to speed up the repopulation of the area.

The territory became important when the Knights Hospitaller moved the centre of the bailiwick to San Martin. As a result, they built the Casa del Comendador, from which the surrounding towns were administered. In 1520, when the war of the communities broke out, San Martín remained at the side of the monarch Charles V. This position during the conflict earned him the title of “Very Noble and Loyal”.

The most important town in Sierra de Gata

In 1642, as a result of the Portuguese War of Independence, the village was razed to the ground. Such destruction meant that it was decided to build it again, but at the highest point. The foundation of the Franciscan convent, as well as its administrative, political and religious importance, made San Martín de Trevejo the most important town in the Sierra de Gata, head of the Corregimiento de Jálama. Already in the War of Independence it was a base for the Spanish army. From there, orders were sent to the troops stationed in the nearby towns.

In 1833, the territorial reorganisation of Javier de Burgos transferred the town from Salamanca to Cáceres. The wine and oil trade, together with a flourishing textile industry, enabled him to maintain his regional prominence. However, it gradually lost weight throughout the 19th century.

As a result of the area’s geographical location in relation to Portugal and the origin of its first settlers, from León and Galicia, the dialect known as A Fala was born. This characteristic is shared with the neighbouring towns of Eljas and Valverde del Fresno. It is still debated whether it is a derivation of Spanish, Portuguese or Galician, even if it is a language of its own. On the other hand, in San Martín de Trevejo it is called mañegu, in Valverde, valverdeiru and in Eljas, lagarteiru. Today it is still in use thanks to the isolation of this corner of the Serra region. It is present in all areas and places: in the names of the streets, on the signs of the shops and, mainly, in the conversations of the locals… For this reason, the Spanish-speaking visitor should not be surprised if he finds terms that are difficult to decipher during his visit.

What to see in San Martín de Trevejo

Of all the things to see in San Martín de Trevejo, the first thing that catches your eye is its carefully designed popular architecture. The ground floor of the houses, once used as a wine cellar or a stable, is made up of large granite walls. Also made of this material are the steps or poyos that bridge the gap between the street and the door. Other two floors rise up from this floor, supported by carved wooden beams. The first floor is used for housing and the second for storage. The façades are made of wood and adobe. Water runs down the slope of the Jálama runs incessantly through the streams or “regatos”, which are used by the residents for irrigation. 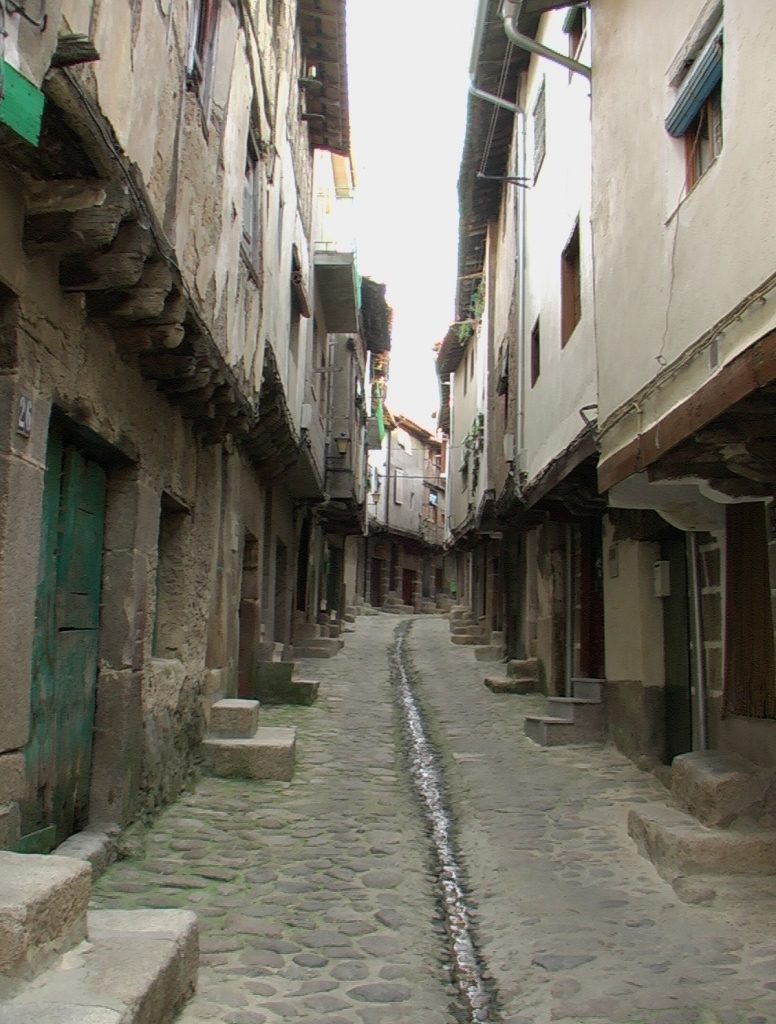 The Plaza Mayor of San Martín de Trevejo is its true social centre. It has a rectangular layout and two of its facades have wide arcades that rest on robust granite pillars. In one of its corners, the Bell Tower of the old church rises up. The church was destroyed in the Portuguese War of Independence. The building still bears the coat of arms of Emperor Charles V. Towards the centre of the square there is a circular fountain dating from 1888. Finally, the eastern flank is occupied by the Casa del Comendador, the former residence of the master of the Encomienda de Trevejo.

The past associated with the Order of St John of Jerusalem can be seen on the emblazoned facades of the manor houses. Particularly noteworthy is the Casa de los Ojesto, which is large and contains important archaeological remains. Finally, there is the Casa Rectoral, with a linteled doorway, and the aforementioned Casa del Comendador.

A church full of masterpieces

Another place to see in San Martín de Trevejo is the Church of San Martín de Tours (17th century). It is a construction with three naves that houses important works of art. Among them, the three tables attributed to Luis de Morales, El Divino, representing the Eternal Father, Saint Michael and Saint Matthias stand out. They date from the 1570s. Also worth noting are the main altarpiece and the Baroque images of St. Peter and St. Paul, from the Salmantine School.

On the outskirts of the village is the Convent of San Miguel. Only the church and the tower survive from their original construction. According to tradition, Saint Francis of Assisi himself was responsible for locating a hermitage there. It is assumed that he would have done so when he passed through the Alto de Santa Clara, which linked Extremadura with Castile. In 1454, Pope Nicholas V authorised the construction of the imposing convent. From its foundation it became a training centre for the whole region. Studies of Moral Theology and Grammar were taught in this beautiful place to be seen in San Martín de Trevejo. Capuchins and Jesuits later occupied the monastery, which has now been converted into an inn.

Besides the water, present in its streets and fountains, two are the liquids that have marked the life of the place since remote times: wine and oil. That is why the boiga, a wine cellar in mañego, are essential places to see in San Martín de Trevejo. Here you can soak up the local winemaking tradition of the Sierra de Gata. As for its olive oil, it has the Gata-Hurdes Denomination of Origin. Both products are the protagonists of the Oil and Wine Museum, located in a 12th century oil mill. It consists of three sections. The first houses the oil and wine rooms, while the second houses the press, the mill and the blender. Finally, the third one is for the decantation, the oil tanks and the turbine.

A Roman road leads to the Port of Santa Clara, at an altitude of 1,000 metres. On the way, oak and chestnut forests intermingle in the Mount Jálama landscape reserve, which still has tunnels and excavations from its previous mining use. The Castañar de los Ojestos or the bridge over the river La Vega are other attractions found before the summit. From the heights you can see the Castle of Rapapelo and the Towers of Hernán Centeno, a famous legendary bandit.

Recommended on the outskirts of the village.