A splendor that was extinguished as a result of the confiscation of Mendizábal in 1835, falling the Carthusian monastery of Escaladei in complete oblivion. It was not until 1989 when the Generalitat rescued its remains and began intensive restoration work. In any case, the monument had already been declared an Asset of Cultural Interest a few years earlier. Today it is possible to walk through the enclosure and contemplate what remains of the church. Also the main cloister and the cells that made up one of the most important medieval and modern monasteries in Catalonia.

The origin of the Charterhouse of Escaladei dates back to 1194, during the reign of Alfonso I of Aragon, anxious to repopulate the area recently conquered from the Arabs. To this end, the king sought and ceded to the French Order of St. Bruno the lands of an isolated and quiet valley, suitable for the secluded life of the Carthusian monks. In 1204 work began on the monastery with the church and twelve cells. A humble origin for a monastic group that would later extend to Madrid, Seville and Granada. 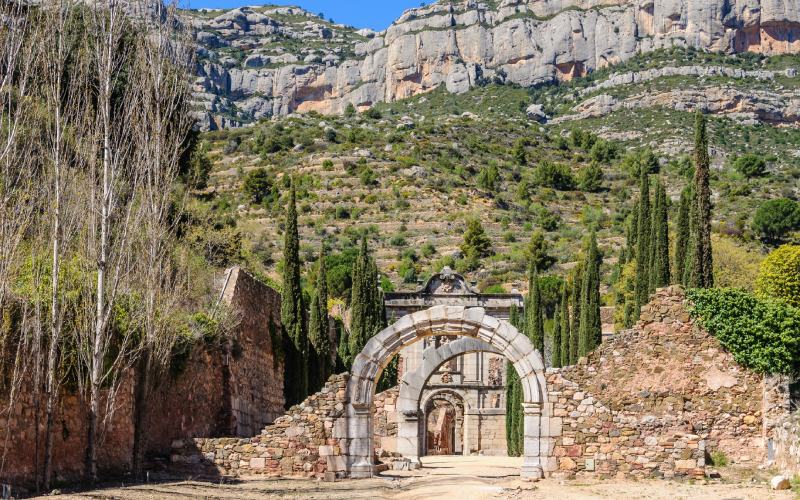 The donations that the order received from Jaume I were vital for the Carthusian monastery to begin to enjoy great prestige and influence over the towns that were shaping the area of the historic Priorat: La Morera de Monstant, Gratallops, Torroja del Priorat, Porrera and La Vilella Alta. Thanks to the royal privilege, Escaladei became a true feudal entity. The Carthusian monks colonized and Christianized the whole area through the cultivation of land, tax collection and the administration of goods. Despite its legal status and economic power, the monastery maintained its spirit of austerity and isolation from the walls inward. The monks also lived in poverty, cloistered in their cells, dedicated to prayer and study.

The Legend of the Stairway to God 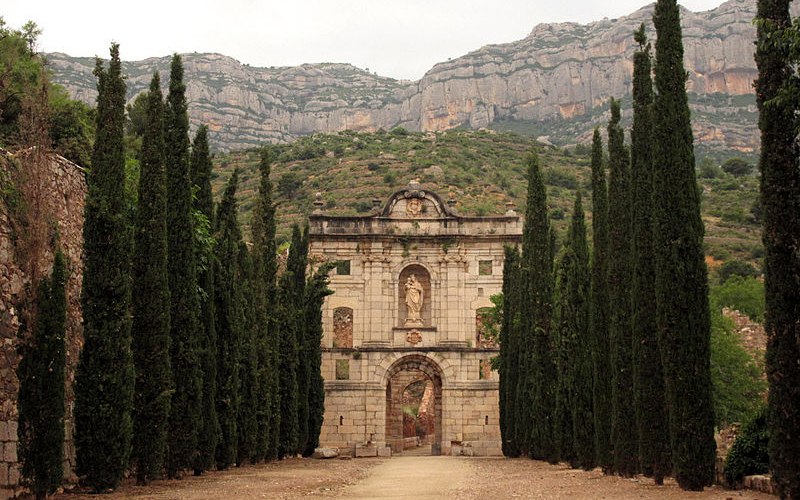 The locals insist on dedicating to this place an interesting legend about the origin of the Carthusian monastery of Escaldei. It is said that after Alfonso I offered the lands to the Carthusian Order, they began to look for the ideal place for the construction of the monastery. During that research, the monks met a shepherd who revealed to them that in his dreams he saw angels ascending to heaven by stairs in the place where he was walking his flocks. The monks interpreted this manifestation as a sign from God and decided to build a small cloister there. This was the origin of the Carthusian monastery of Escaladei, which means ‘stairway to God’.

The disparity of styles of the Charterhouse of Escaladei

Escaladei is today an attractive and fully sensitive monument. Each of its corners recalls its splendorous past and the importance it acquired as a territory during the six centuries it remained active. The expansion of the monastic complex over such a long period gave rise to a building with different architectural styles predominant in each period. 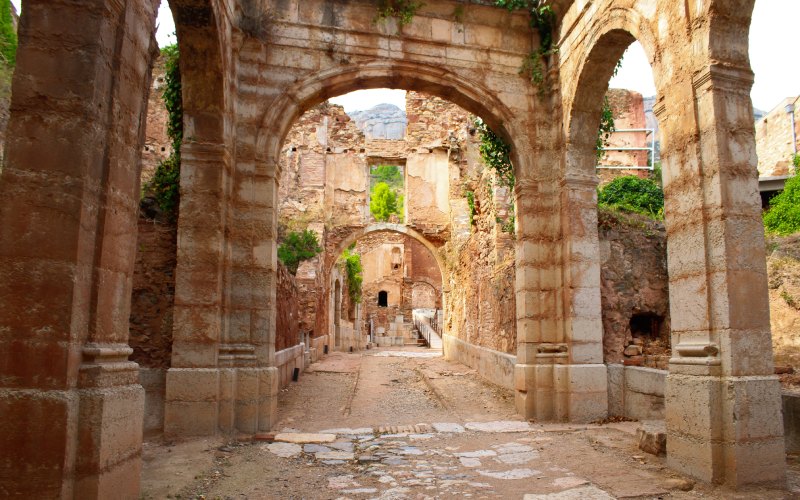 Interior of the Carthusian monastery of Escaladei | Shutterstock

The Carthusians built the Church of Santa Maria, the Royal Cloister, the cells, the Chapter House and the Refectory in a style of transition from Romanesque to Gothic. The moment of maximum splendor of the Carthusian monastery of Escaladei began in the 16th century, at the height of the Renaissance in Catalonia, and lasted until the 18th century. This succession of years and reigns produced a disparity of styles, which led them to undertake a major reform combining elements of classicist and baroque tendencies. It also became an artistic center of the first order. 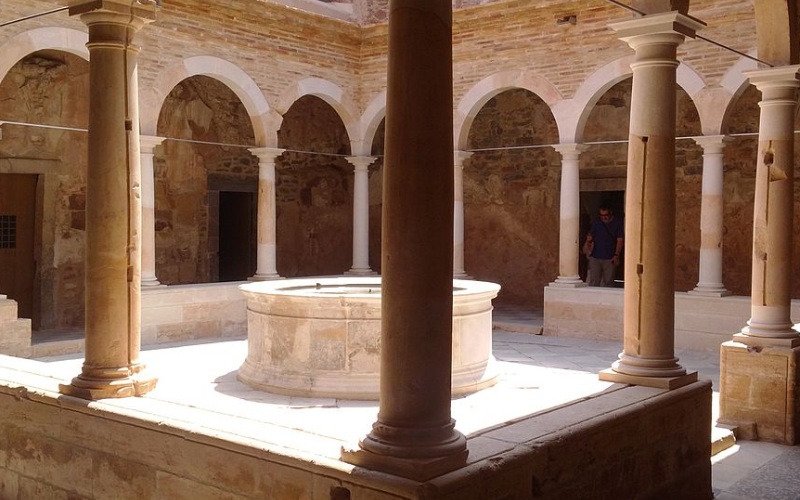 Courtyard with the reconstructed fountain in the cloister | Wikimedia

The monastic complex was gradually expanded until it doubled its final capacity in 1403, with the construction of the last flamboyant Gothic cells. The excavations carried out in 2020, focused on the cloister and the church, have unearthed three Gothic chapels more than thirty meters deep.

The last gasps of the Charterhouse of Escaladei

Thanks to the royal protection and the prestige that the Carthusian monastery of Escaldei had acquired since its beginnings, the Priorat area experienced a strong growth in culture and agriculture. On the rocky soil of the area, vineyards and olive oil plantations spread, two elements that were to be the commercial dynamization of the whole region. 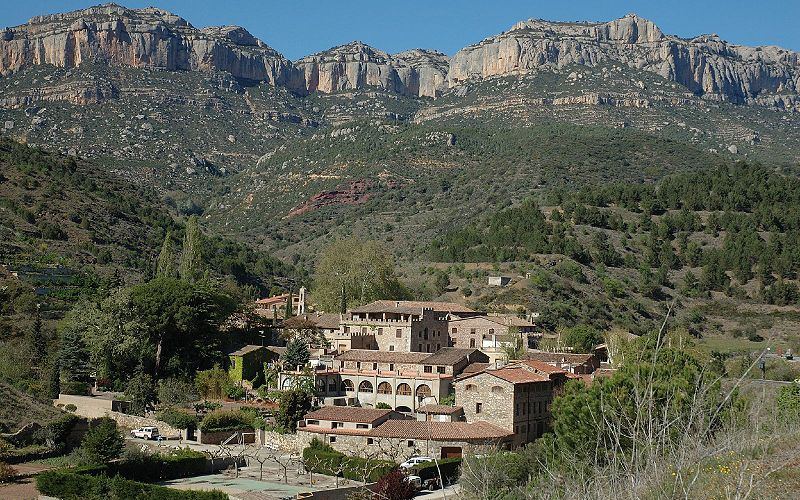 Those glorious years for the Carthusian monastery suddenly vanished with the disentailment of Mendizábal in 1835. The monks abandoned the monastery, leaving it at the mercy of plunder. The monastery became the target of the anger of the locals fed up with the tithe and monastic supremacy. Escaldei was set on fire and fell prey to looting that soon turned it into an area full of ruins.

The most complete and authentic restoration

The great work that the Carthusian Order had done in the Priorat region could not be forgotten. In 1989 the Generalitat de Catalunya took possession of the land and began to recover the vestige of what was the first Carthusian monastery in the Iberian Peninsula. 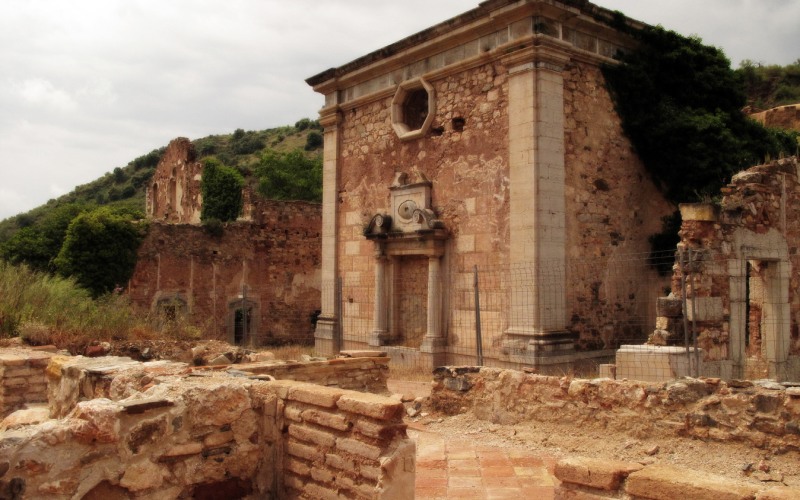 Chapel of the Sagrario | Wikimedia

The reconstruction of the cenobitic area was completed in 2013. The archaeological discoveries of pieces belonging to the arcades, columns and capitals, as well as most of the floor of the galleries, made possible the recovery of the cloister. This responds identically to the original Renaissance structure of the 16th century, when the medieval cloisters disappeared and the Charterhouse was built as it is known today. The fountain in the central courtyard, built in the 17th century, has been raised and put back into operation.

Today it is possible to get a closer look at the monks’ place of retreat in the restored cells, the rooms where they spent their days dedicated to contemplation and study. The Refectory has also been reconstructed, where the Carthusian monks used to meet to eat together on Sundays or other festivities. During the tour of the Carthusian monastery of Escaladei you can also see part of the remains of the old church and the altarpiece of the Virgin located at the entrance of the enclosure.

The Carthusian monastery of Escaladei was the origin of the current Priorat region, a constellation of small charming villages presided over by the Montsant massif and dotted by the rugged mountain ranges that surround it. It is a land associated with wine, with a lively agricultural landscape of great beauty. It has an extensive network of ancestral roads that have survived the passage of time. The Priorat is to get in touch with nature, an ideal place to stroll among vineyards, from village to village to immerse yourself in protected natural areas such as the majestic Sierra de Montsant or the amazing Sierra de Llaberia. 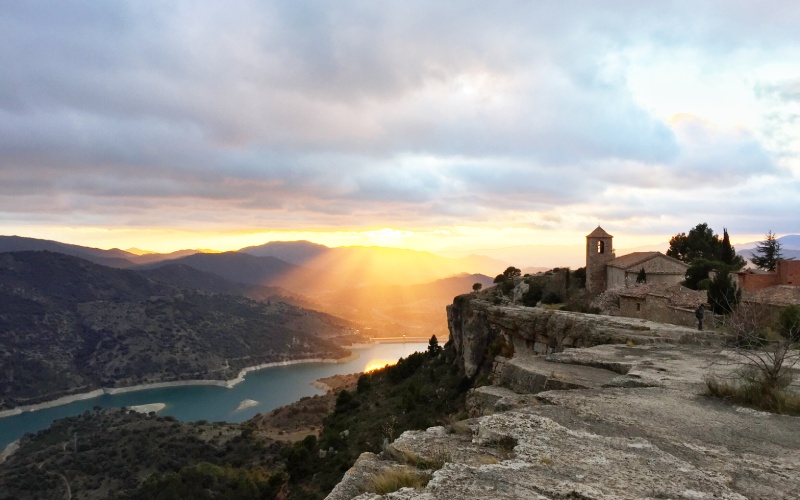 Catalonia, churches, history, monasteries, Tarragona
It may interest you...