Only about three kilometers from Palamós, in the province of Girona, is the small spot of Cala S’Alguer. A group of fishermen’s houses, small boats, a beach of crystalline waters and a small forest make this place one of the most incomparable corners of the Costa Brava. If you are looking for peace, this is a small oasis of peace in the midst of the usual hubbub of the Catalan coast, although in high season it must be recognized that it has a high level of occupancy.

A place trapped in time 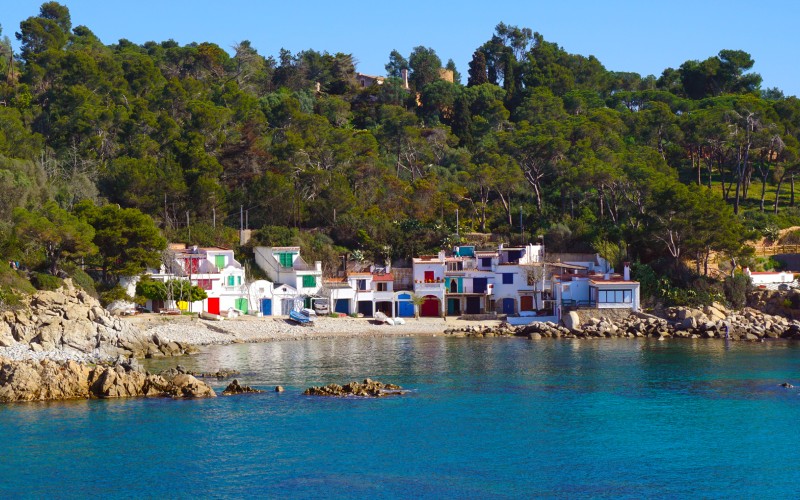 Declared in 2004 an Asset of Cultural Interest by the Generalitat de Catalunya, S’Alguer cove is a wonderful scenic enclave. A place where time seems to have stopped. About 40 kilometers from Girona, between Platja del Castell, Platja de la Fosca and Castell de Sant Esteve de Mar, this small cove is only about 60 meters long and just over 4 meters wide.

On one side, a group of small white houses, so typical of the popular architecture of the area, with large wooden gates painted in different colors. On the other, a group of fishing boats, so characteristic of the Costa Brava, flank the place. These little houses have now been converted into weekend homes, although in the past they were used by the fishermen to store their fishing gear. The sea, with its dark turquoise green, and the white pines of the Pineda d’en Gori, which surround the place, complete a simply spectacular set. It should be noted that the cove does not have any services, beyond an occasional small bar, and its main attraction lies in enjoying the views, a refreshing dip or a quiet read. 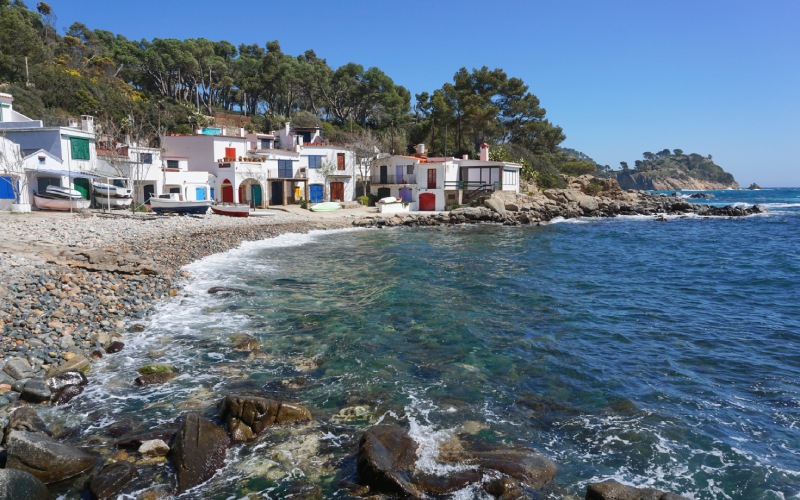 The bottom of this cove, practically virgin, is mostly rocky, so the use of appropriate footwear is recommended. Its sand is semi-thick gravel and the seabed is transparent and clean. It is possible to contemplate a multiple variety of species, such as, for example, corals. If you want to access by car, the nearest parking lot is about 200 meters away and it is necessary to go through a small forest.

A distant and very traditional past 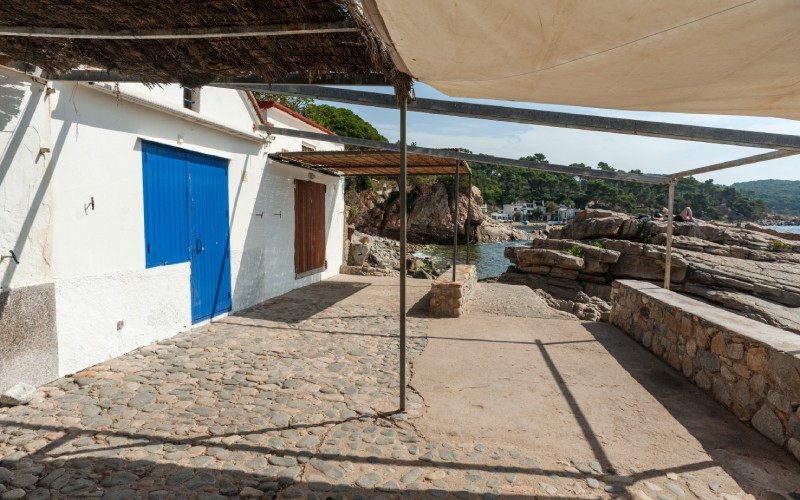 This small cove traces its history back to the 16th century, specifically to the year 1521, when a small fishermen’s quarter with whitewashed buildings was established there. The small buildings, an example of the popular architecture of the area, have stone walls and Catalan ceramic volta with up to three thicknesses of adobe. They had terraces and natural ramps to beach the boats and were also used to store all the necessary fishing tools.

Nowadays they are kept in optimal conditions thanks to the neighbors of the zone. Above is the silhouette of the Mas Juny estate, a refuge for intellectuals in the early twentieth century and owned by Josep Maria Sert and later by the Puig Palau brothers. One of the adjacent buildings, Mas Castell, was built by Raimon Duran Reynals for Albert Puig Palau, the uncle Alberto of Joan Manuel Serrat’s song. Lluís Nadal Oller, the architect who continued Duran’s legacy, left a model of what could have been the future of the area on the La Fosca promenade. 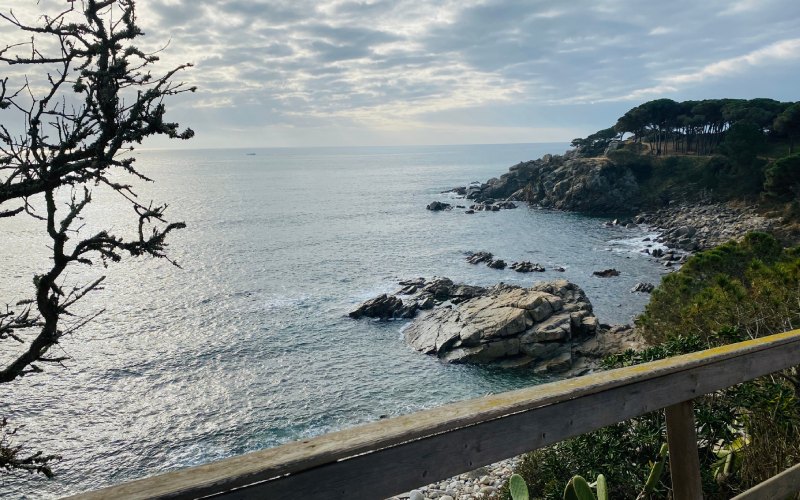 To get to S’Alguer cove you can use different options. One of them is to leave the car in the parking lot at Platja del Castell or in one of the nearby urbanizations and follow the indications of the different paths towards the sea. You can start the route from Palamós, linking with the Camí de Ronda, the coastal path that connects Portbou with Blanes. This path allows you to get to know all the towns and their small coves. In this case, it allows you to reach the Castell de Cap Roig, walking or cycling.

For some, the route between S’Alguer, Canyers and Estreta coves is one of the most beautiful in the world. In Palamós you can find wonderful restaurants where you can taste the delicacy of the area, the prawns of Palamós, especially during the period from April to July. If you visit the area it is impossible not to go to the town of Calella de Palafrugell, one of the eminently fishing villages in the area and where you can enjoy, among other things, the famous havaneres songs. 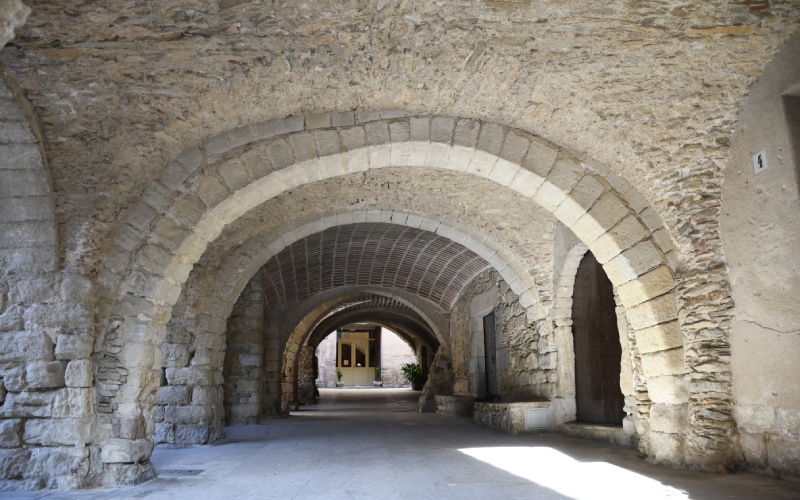 If you prefer to visit the inland villages of Baix Empordà, do not forget Peratallada and its important medieval architecture. Pals, on top of a mountain, Monells with its main square, Palau-Sator, which preserves its agricultural and livestock environment or Madremanya, a great unknown. Ullastret and its extensive architectural heritage, which highlights its Iberian city of more than 2,000 years, considered the largest Iberian city in Catalonia, is another place that visitors to the Baix Empordà can not miss. The whole area is a real treasure for the senses.

beaches, Catalonia, Costa Brava, coves, Girona
It may interest you...