In an area of Neolithic dolmens, Peratallada is a medieval complex with a famous castle-palace. Its history is linked to one of the most famous feudal families in Catalonia. Do you dare to discover what to see in Peratallada?

This town is considered to be one of the most important centres of medieval architecture in Catalonia. It hides corners of great beauty such as its castle, the church of Sant Esteve, the dolmens of Tres Cantos and many others that we include in the section What to see in Peratallada. As it is a relatively small town the tour can be done in a morning.

The town is full of megalithic monuments that confirm an early occupation. The Arabs occupied the area between 713 and 725. At that time it was dominated by knights who depended on the Carolingian Empire until the year 801.

Already in 1062 there is a reference to the Castro de Petra Taliata (carved stone). Along the following century there was a stable settlement linked to the lordship of Peratallada. In 1153, Dalmau de Peratallada was one of the first landowners of the place.

This lineage was gaining prestige among the Catalan nobility. However, in 1266 – during a time of deep crisis in the region – the knight Gilabert de Cruïlles married Guillema de Peratallada. Thus, he gained control of the castle and the town, where they usually lived.

He was an important character. So much so that, in 1283, he was one of the three knights chosen to accompany King Peter II the Great of Aragon in the famous tournament that was to take place in Bordeaux (then part of the Kingdom of England). The opponent would be King Charles I of Anjou. The winner was supposed to take both kingdoms but the Frenchman did not show up.

Two years later, Cruïlles will have a prominent performance in the battle that took place in nearby Peralada. In 1315 the king confiscated his fiefdom of Peratallada, returning it to the family some time later. Later, in the 14th century, the town saw an economic recovery and the maintenance of the prestige of the Cruïlles family; which is why on various occasions it received the Kings of Aragon as guests.

During the War of the Remences, the knight Bernat Gilabert de Cruïlles is one of the nobles who opposed King John II. His son, Prince Ferdinand of Aragon (called the Catholic), in 1476 besieges and conquers the castle with the help of other members of his family. At the end of the war, the lordship was held by a member of the family who supported the king: Pere Galcerán de Cruïlles. In 1964 the castle became the property of the Marquis of Torroella de Montgri, who began to restore it the following year.

What to see in Peratallada

You can start your visit to Peratallada, declared a Historic-Artistic Site, by walking around the Wall, built in the 12th and 13th centuries, and observing its moat. The Portal de la Virgen also stands out, the only one of the medieval entrances still visible. 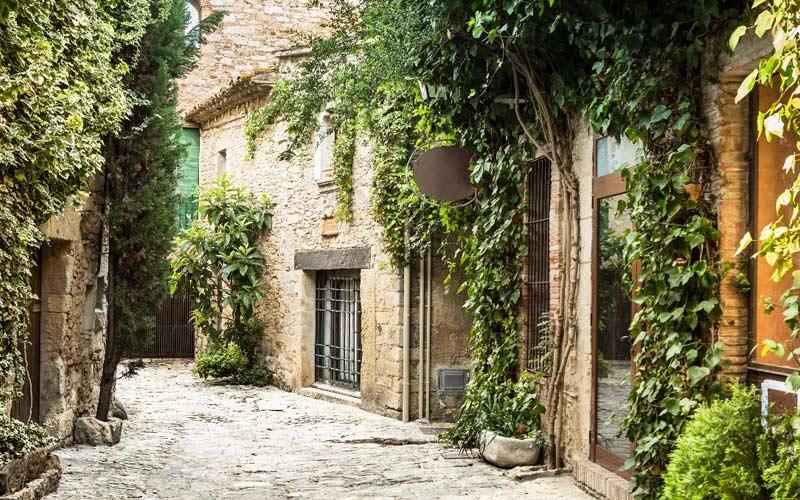 The Castle that you see in Peratallada has a very remote origin. It preserves in its complex structure some early medieval traces, although most of it is from the 11th to 13th centuries. It is remarkable in Peratallada its well-preserved Tower of Homage, crowned by battlements. Inside the enclosure, opposite the main square, is the late medieval palace in Gothic style inhabited for so many centuries by the Cruïlles.

In the same way, it is possible to see another tower of homage, belonging to the Castell de Peralta. Its origin would also be in the 11th century and it also belonged to the lineage that bears the name of this municipality. It was integrated into a farmhouse and we can still observe the low-medieval reforms in its factory.

The most important site in Peratallada

The most important monument to see in Peratallada is the Church of Sant Esteve (12th century), a valuable example of Catalan Romanesque, which stands out for its sober front, the lower part of which has a characteristic doorway moulded with an oculus. Between the 16th and 18th centuries several chapels were added to the body of the naves in addition to the new sacristy. It was an authentic church-pantheon of the Cruïlles family and some of the medieval tombs are even preserved inside, such as that of Gilberto (1348).

In Canapost you can visit an old medieval necropolis around another Church of Sant Esteve, an example of early Romanesque with pre-Romanesque elements. In the 11th-12th centuries, the tower with its crenellated bell body and a nave were added. The unfinished façade, designed in the 18th century, is surprising. Inside there are Romanesque and Gothic wall paintings.

In the Plaça Major, Plaça de les Voltes, a curious ensemble of portals allow visitors to walk underneath the houses; many of which date from the 16th century. In the nearby Sierra de Cals, you can find the dolmens of Tres Cantos and Mas Estanyet. On the other hand, the number of existing lime kilns, such as those at Fonteta, is striking. There are also brickworks such as Can Frigola (San Clemente de Peralta). Finally, the group of the Quarries or Holes of San Julián, of great geological interest, is unusual.

You cannot drive in a car. There are two paying parking lots available at the N and S entrances (coming from La Bisbal or Torroella de Montgri).