The lake of Banyoles, or Bañolas, in Spanish, is a wonder of nature whose origin is linked to the Fluvià and Ter rivers. It was formed in the Quaternary period, about 250,000 years ago. It is currently considered an environmental complex of huge value. Not in vain, it is the largest and most abundant in Catalonia. Thanks to all this, it has been declared an Asset of Cultural Interest and a Ramsar Site, a designation acquired by wetlands of international importance.

Its ecological, cultural and scenic virtues are undeniable. You just have to set foot there, contemplate the lake and observe its impact. It is a charming, peaceful place, very visited by locals and tourists at all times of the year, a recommended place to spend a day in the countryside in which to perform very different sports or leisure activities. Located in the province of Girona and is undoubtedly one of the great attractions of the area. 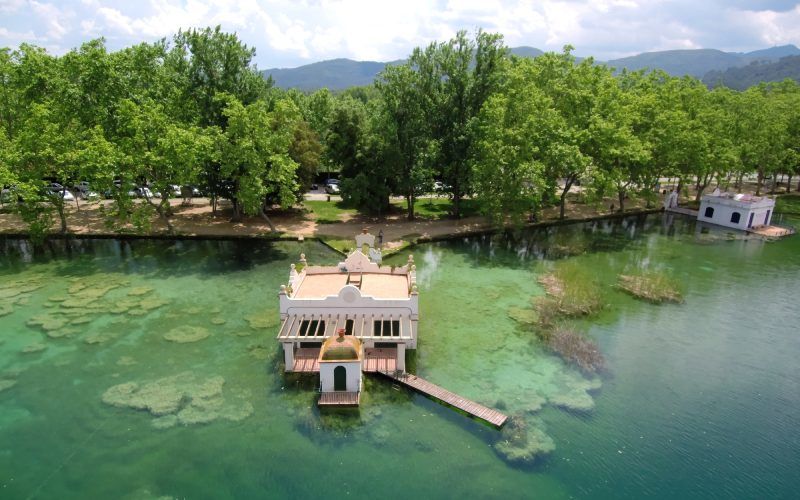 Views with a drone of the Banyoles Lake, in Girona. | Shutterstock

A peaceful and idyllic place linked to sport

The waters of the lake of Banyoles are warm, clear and calm, so you can practice water sports with some safety. The average depth is 63 meters. Many athletes come to practice canoeing, kayaking, swimming and other water sports. Not in vain the whole area was remodeled to dispute in 1992 the unforgettable Olympic Games in Barcelona. From that period there are still buildings and remnants that are used daily by its users. It has hosted, in turn, various rowing and canoeing championships throughout its history. There is a nautical club with almost 100 years of history that is located in the vicinity of the lake and from which high-level athletes have emerged. 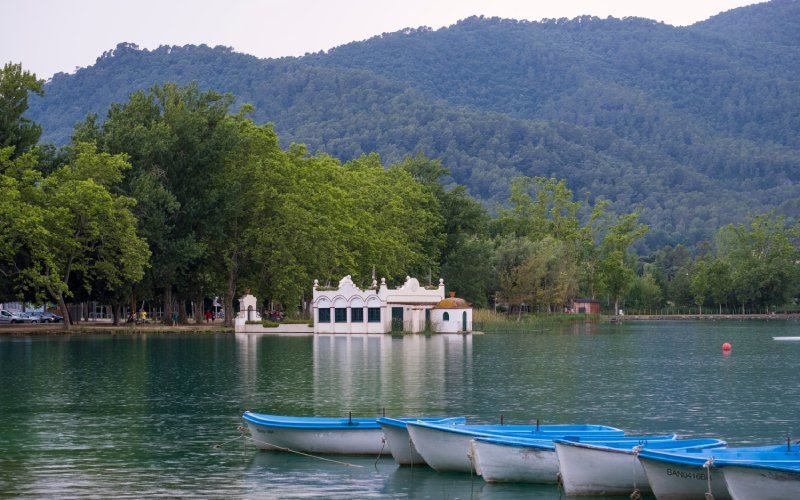 Other impressive aerial views of the Banyoles Lake, in Girona. | Shutterstock

But the conventional activity, which most families do, is to make a tour of the lake. A circular walking route that is just over seven kilometers long and can be completed without great effort. It is a pleasant walk. Be careful, because there is only one area where free swimming is allowed, which is near the Caseta de Fusta. It is fenced and safe, but in any case, you should always take the utmost caution when entering its waters.

You can see the old fishing boats in the water. They were, as the name suggests, the fishermen’s houses located on the shore of the lake. Some of them are famous because, apart from being beautiful, they give the impression of being a small palace that stands out especially in the landscape.

The Neolithic Park of the Dredge, a fascinating piece of history

In 1990, in the middle of a renovation of the garden in the eastern part of the lake, this kind of settlement was discovered, which according to historians originated in the Neolithic period. Some remains were found that belonged to a gathering village more than 7,000 years ago. They would have settled around the large pool to take advantage of its waters in their daily work. Today it is a theme park whose extension is a little more than 10,000 square meters and receives visitors daily. 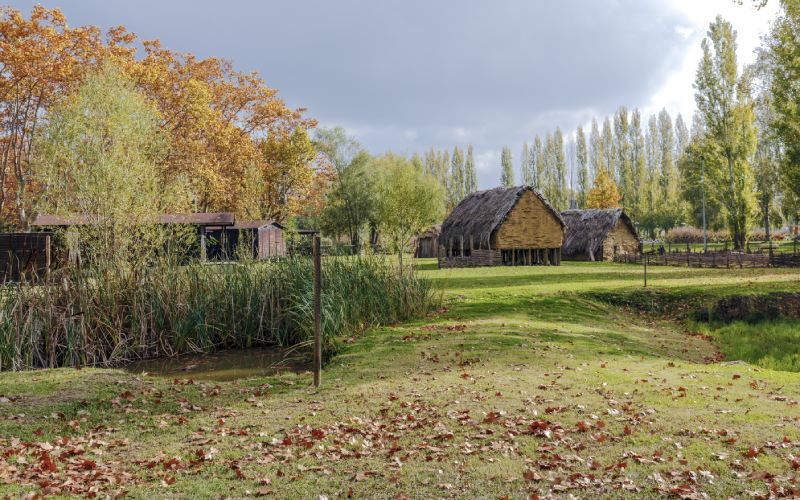 You can perfectly contemplate some remains of the Neolithic huts, where lived people expert in livestock, hunting and fishing. Not only that, but animal bones and tools from that time are preserved. There is the possibility of guided tours throughout this camp and its surroundings, an activity that is highly recommended. It is not uncommon to find school and scout groups in the area.

In this park we can find a barn and cabins, as well as an area specially designed for children, with wooden swings that match very well with the village and the landscape of the area. Nearby, you can enjoy a health and sports park installed for exercise.

Many activities throughout the year

The natural area of the lake of Banyoles enjoys great dynamism throughout the year. Administrations, sports and leisure organizations, environmental groups and individuals carry out all kinds of activities in the surrounding area. Virtual routes are also available through the official website of the Consortium for the Area of Natural Interest of Banyoles and Porqueres Lake. The lake environment is the heritage on which gravitates the town of Banyoles and its history. Adjacent, it has just over 23,000 inhabitants. Water flows through the village thanks to five irrigation ditches built in the 10th century. Most of the mills that generated the wealth that the town had in the past settled on its shores. 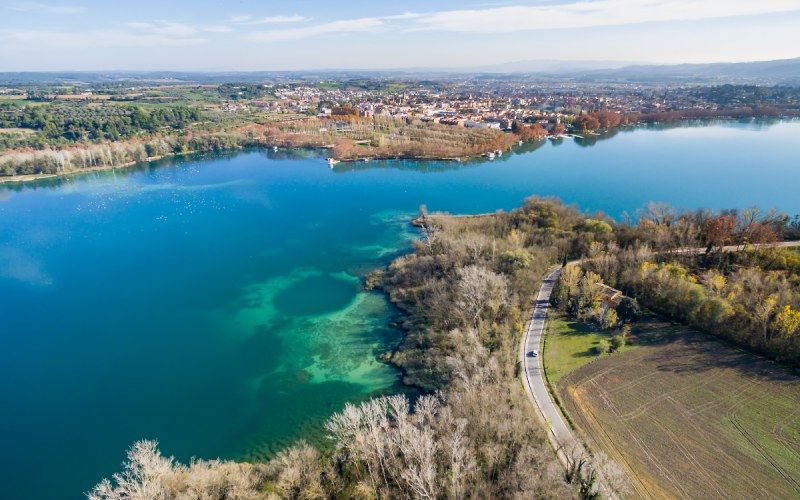 Landscape of the lake of Banyoles in the province of Girona, in the autonomous community of Catalonia. | Shutterstock

In the lake itself makes a route a small boat linked to tourism that opens seasonally and goes around at a pleasant speed. There you can also rent boats and bicycles to do some physical activity. In winter you can see, in the background, the snow-capped mountains of the Pyrenees, which offers a spectacular view. It is not uncommon to find nature lovers and photographers in the area taking pictures of its fascinating sunsets.

The place is ideal to go with the whole family or alone. Both alternatives allow you to enjoy a pleasant day in the countryside, water and vegetation. The best time to go is autumn, when the hatching of colors is spectacular.

As a curiosity, it is worth mentioning that there is a legend about the Lake of Banyoles that assures that there is a huge crevice that was the lair of a huge dragon, the Clot del Drac. This serpent used to cross the waters in all its splendor, according to folklore. The myth has several versions, from the kindest that say that the monster was a vegetarian to other more terrifying ones, always used to tell stories to the little ones of the place.