The heart of old Barcelona

Barrio Gótico, in the Ciutat Vella district, is located between Las Ramblas, Vía Laietana, Paseo de Colón and Plaza de Cataluña. It is one of the most beautiful, historic areas of the capital. It is also among Barcelona’s most unique quarters.

Plan your stay in Barrio Gótico

A visit to Barrio Gótico in Barcelona in Spain is like a trip to the past to discover the early Roman Barcino and the medieval city of winding streets, squares with palaces, residences, and gothic churches. We recommend visiting the cathedral, enjoying the façade, and exploring the urban environment. In this section, we highlight the main places you should see in Barrio Gótico in one or two days. You can spend the rest of your trip in nearby quarters such as la Barceloneta, el Born, and El Raval.

It is important to know its history to decide what to see and what to do in Barcelona’s Gothic Quarter. The history of the Barrio Gótico begins when it rises above the ancient Roman city. In fact, the streets Bisbe and Libreteria, near Sant Jaume, follow the path of the ancient Roman cardus and decumanus. Very close to them you can still see the remains of the Roman temple of Augustus. Originally, this city was a small town dependent on Tarraco.

During the Middle Ages, many Gothic churches and palaces were built in this area of Barcelona. Thus, it was transformed into a medieval city, with narrow and labyrinthine streets. In this way, it would remain practically intact until the 19th century. Then the neighbourhood was transformed, the cemeteries became squares and the walls were demolished.

The Middle Ages were one of the city’s golden ages. Its dynamism would make it the headquarters of the royal court of Aragon after the unifying marriage of Ramon Berenguer IV with Peronella (daughter of Ramiro II of Aragon) in 1137. 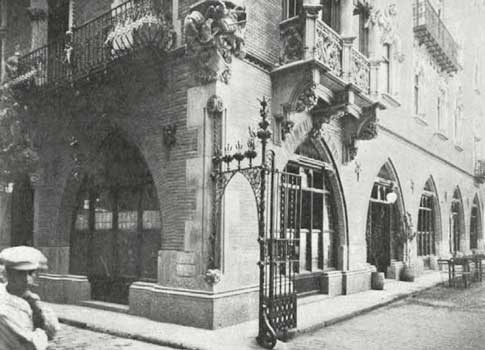 A century later the municipal government was consolidated thanks to the privileges granted by King James I. The Consell de Cent was established, made up of the residents in charge of governing the city and electing its highest representative every year. Barcelona would become the capital of a Mediterranean empire whose wealth would be reflected in its Gothic buildings to be seen in the Gothic Quarter.

This prosperity lasted until 1333, when famine and the plague wiped out thousands of Barcelona’s inhabitants. Four years later, the city was devastated and decimated again, this time by the Black Death.

What to see in Barrio Gótico

A visit to Barcelona’s Gothic Quarter is like taking a trip back in time to discover the primitive Roman Barcino and the medieval city, with its narrow streets and winding squares with palaces, residences and Gothic churches.

Start your tour with a breakfast at Café Zurich, one of the most emblematic places of the city. Then, head to Plaza Cataluña (1927), the link between the Roman, medieval city and the contemporary Eixample. Its circular floor surrounded by a landscaped belt and a group of sculptures including Pastor tocando el flabiol by Pablo Gargallo are not to be missed. In the center, a mosaic draws a sort of compass that defines the axis of the sea-mountain backbone of the city.

Through the small passageway of Rivadeneyra Street you can access the Monastery of Santa Ana, a 12th century Romanesque church, which has a standout Gothic façade, cloister and chapter house.

In Montsió, you should check out the Casa Martí, a medieval-looking building designed by Puig I Cadafalch in 1896. On the ground floor, you will find the Café, a restaurant of Els Quatre Gats, who was the center of intellectuals’ meetings in Modernist Barcelona until 1903. Well-known figures such as Santiago Rusiñol, Ramón Casas and Picasso came to the café and attended these meetings.

By Portal de l’Angel Avenue (a pedestrian area with many shops) and Dels Arcs Street, you’ll reach Plaça Nova.  It is a medieval enclave and old market in which the semicircular towers that lined the four gates of the Roman citadel are still intact.

The Casa de l’Ardiaca (Casa del Arcediano) meets part of the medieval wall. In this plaza, there are seven large letters that contrast with the historical background where they are found; in the letters, “Barcino” is read with the alphabet Joan Brossa created for this peculiar visual poem about the city’s past.

At the other end of the plaza is the College of Architects of Catalonia, with friezes designed by Pablo Picasso and made with sandblast.

In the Plaça of Seu, the Cathedral of Santa Creu or Santa Eulalia rises. The gothic work was funded by donations from medieval guilds and brotherhoods. The building began in 1298 and was not completed until 1913. The cathedral occupies the site of a fourth century ancient Christian basilica, destroyed by the troops of Almanzor, of which only the baptistery is preserved.

The church is divided into three naves with 25 side chapels; inside the impressive choir of the fourteenth century stands out. In 1517, the members of the Toisón de Oro met there by order of Emperor Charles V. 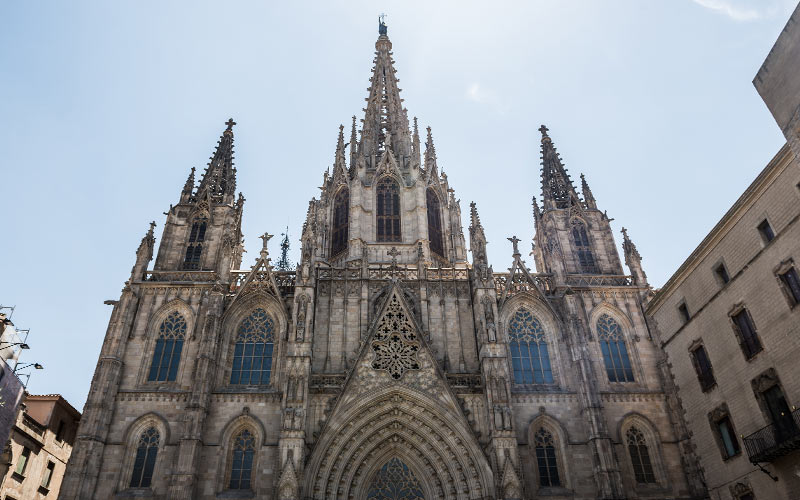 Facade of the Cathedral of Santa Eulalia

Next to the cathedral is the Pia Almoina building, integrated into the Roman wall and home to the Diocesan Museum. Nearby is the Church of San Felipe Neri (around 1673), a building with a Baroque façade (with bullet impacts from the 1936 uprising). Also not to be missed are the side chapels with neoclassical altars and paintings by Joan Llimona. A must see in the Gothic Quarter.

Along Carrer del Bisbe we will head towards Carrer Paradís to enter the small medieval courtyard of the Centre Excursionista de Catalunya. There are the four columns of the Temple of Augustus (1st century BC) to be seen in the Gothic Quarter.

Continuing along Carrer del Bisbe we arrive at the Plaça de Sant Jaume, the heart of the neighbourhood. Here we find the Casa de la Ciutat building – Barcelona City Hall – and, on the other side of the square, the Palau de la Generalitat de Catalunya, the seat of the autonomous government.

The Town Hall has a neoclassical façade that hides the Gothic Salon de Cent (14th century). This served as a meeting place for the Consell de Cent between 1373 and 1714. The hall and the Gothic staircase are also noteworthy, with sculptures by Gargallo, Llimona, Navarro, Miró and Clara, among others. The Salón de Crónicas was decorated by Josep María Sert in 1928 with paintings that offer different perspectives depending on the angle from which they are viewed.

As for the Palau de la Generalitat, its neoclassical façade incorporates Gothic, Renaissance and Baroque elements. We recommend that you look at the Gothic cloister, the flamboyant Gothic chapel on the first floor and the Renaissance Patio dels Tarongers (Orange Tree Courtyard, 1532-1547). The main hall or Salón de Sant Jordi is also interesting; the one in Torres García was decorated by the Uruguayan artist. 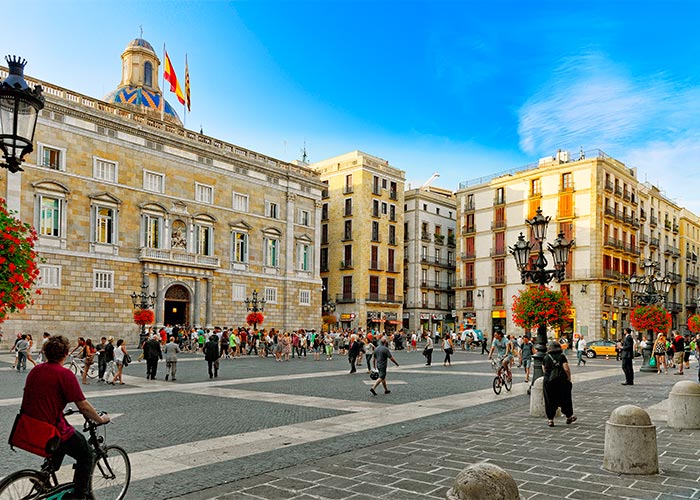 A walk through its streets

Veguer Street takes us to the gothic Plaza del Rey. It is surrounded by the monuments of the Royal Palace. In a corner of the plaza, there is a watchtower known as Mirador del Rei Martí. The square also features the sculpture Topos V by Eduardo Chillida as well as the MUHBA-Museum of History Barcelona.

In the Plaza de Ramón Berenguer III you can also admire the Roman wall from the Low-Imperial period, which alternated towers with wall paintings. During the Middle Ages, arches were opened between the towers. These allowed the use of the wall in later constructions, such as the Royal Chapel of Santa Águeda. Built on a stretch of arches, this chapel preserves an extraordinary Gothic painting.

The Church of the Saints Justo and Pastor (14th century, but founded in the 9th) is remarkable for its octagonal tower that gives height to the whole. Also noteworthy are the Altarpiece of the Passion (16th century) in the chapel of Sant Feliu and the Santa Creu. In the square is the Gothic Fivaller fountain.

You can end your tour of Barrio Gótico with a stroll through La Rambla, the main street of the old town and the link with El Raval. La Rambla is potentially the most important site to see in Barcelona’s Barrio Gótico. It is like no other street in Barcelona.