In the region of Vallés Oriental, province of Barcelona, a little more than 7 kilometers from the town of Sant Feliu de Codines, is the impressive monastery of Sant Miquel del Fai. It is actually a space made up of several monuments and places of interest that work as a single complex. It is immersed in a spectacular natural enclave, surrounded by caves, waterfalls and mountainous nooks and crannies near the waters of the river Tenes.

It was designated of Cultural Interest by the State in 1988, which gives an idea of the heritage value of the whole monument. Its architectural style combines elements of Romanesque with others typical of Catalan Gothic. It is an ideal place to make a getaway by car to see an interesting and curious monumental complex with a lot of history behind it. It is also possible to make several routes in next  and other activities. Therefore, it attracts hikers and nature lovers. 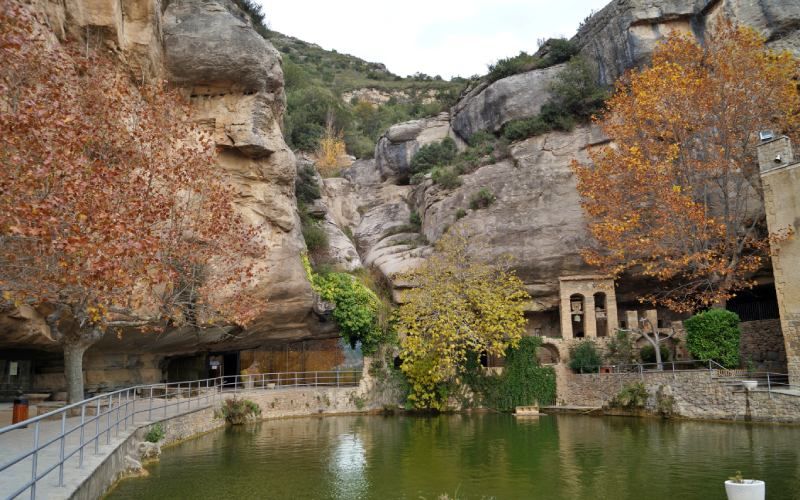 A view of the Monastery of Sant Miquel del Fai, Catalonia, Spain. | Shutterstock

A place of worship linked to the Benedictine friars

The monastery, its surroundings and several buildings have been and are a fascinating and religious place of which there is documentation since the year 887. Decades later from its first settlement burst the figure of Gombau de Besora, who was a very believing and devout aristocrat who had a great influence throughout Barcelona in the late tenth and early 11th century. This nobleman acquired the land to, after receiving important donations, found a monastery that was built on the Church of San Miquel. It was the beginning of something big. 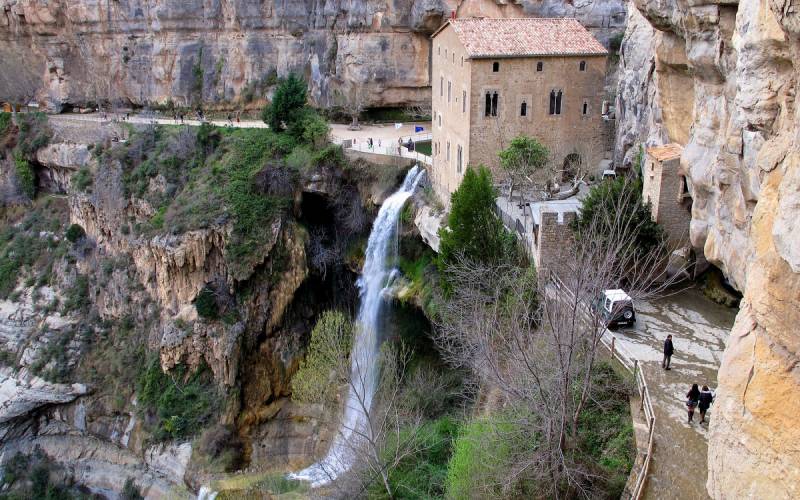 It can be said that from its origins there was an important religious activity in the area. Many locals went there to say their prayers. There were always friars in the area carrying out their work of worship. But it should be noted that the Priory house and other parts of the monument were not erected until the 15th century, much later. In 1567, after the relevant secularization processes, the stairs and the bridge leading to the monastery underwent major works, and even the parish itself underwent some transformations. In the 19th century it became private property and in the 20th century it became an important tourist destination. In 1990 the space was acquired by a group of Catalan businessmen who have managed it to date.

Its tourist use, unfortunately, has not been linked with a conservation plan and this has been felt by the building and its surroundings, sometimes deteriorated. It has not been until 2017 that the Diputació de Barcelona has entered the scene by acquiring a large part of the estate. That is when its protection has been improved and guaranteed a correct public use. Currently the whole space has more quality and habitability.

A troglodyte church born in a cave

One of the main peculiarities of the Church of Sant Miquel del Fai is that it was built using the same stone from one of the caves. That is why they say that it has a troglodyte character. In it you can see a Romanesque style chapel dating from the tenth century. 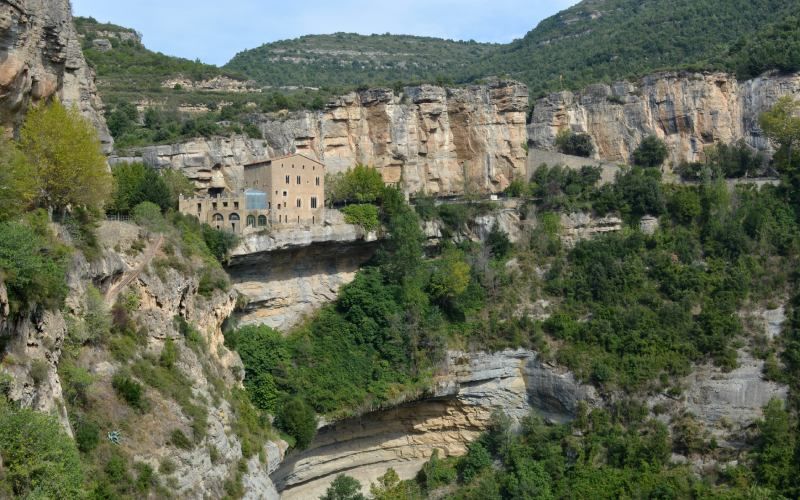 The monastery and its natural environment. | Shutterstock

Outside, located in the Abbey square, is the Priorat house. The Catalan Gothic style reaches its best representation with this building, built in the 15th century with the aim of replacing the previous monastic constructions. There was established the Prior’s House and the dependencies of the monks who lived in the monastery. From its viewpoint it is possible to enjoy some of the most beautiful and exciting views of the entire complex. 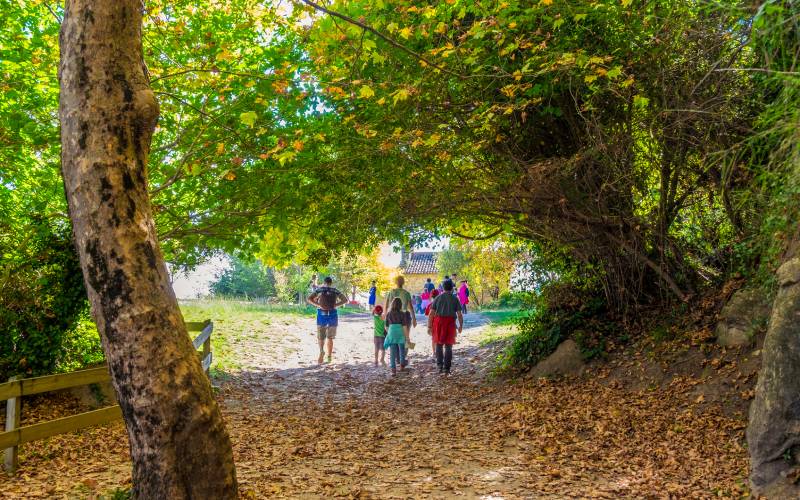 View from the path that crosses behind the waterfall of the Tenes River in the natural space. | Shutterstock

The two caves in the area are also great. On the one hand, the cave of Sant Miquel, an authentic natural refuge, full of impressive stalactites and stalagmites. On the other, the Tosques, more secluded. A hidden place that requires professional help to reach it. It is necessary to go down some really narrow corridors almost like a fusion with the rocks. To visit it is advisable to use shoes that grip well and are waterproof to visit the area.

The spectacular waterfall of the Tenes River

A truly impressive place where many tourists arrive daily. This is the Tenes River waterfall. There, in the shelter of the caves, you can feel the waterfall fall in all its dimension. Its vibration, the noise of the falling water, the humidity, the beating of nature, a prodigious place for the senses. We recommend you to close your eyes and let yourself go. 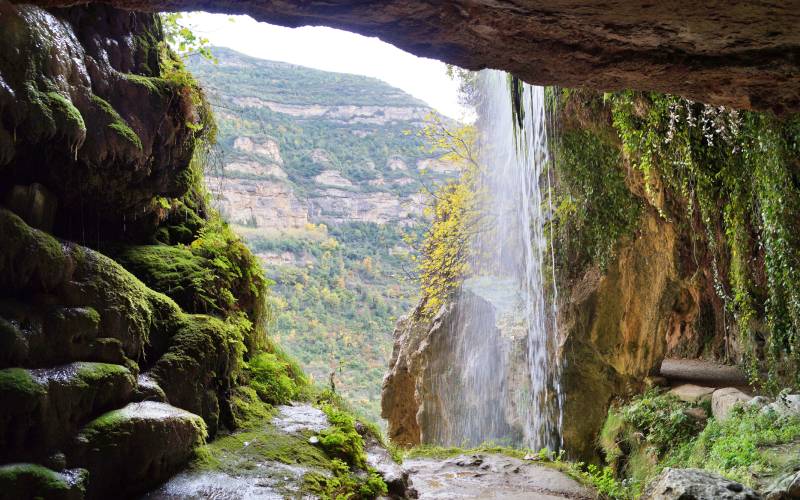 From the area of the caves you can follow the path of the Hermitage. It is a path to a ruined hermitage dating from the ninth century and is a good place to rest a while, breathe and meditate a few minutes. It is the original church of the area, where pilgrims went to pray in those times.

An accessible space that offers routes for everyone

There is a provincial bus service that leaves from Barcelona and, stopping before the village of Sant Feliu, reaches the whole area of the monastery of Sant Miquel del Fai. But, of course, there is also the option of visiting the complex with a private car. The whole Natural Area, which is the name given to the whole tourist complex, has good accesses, decent land management and public facilities. 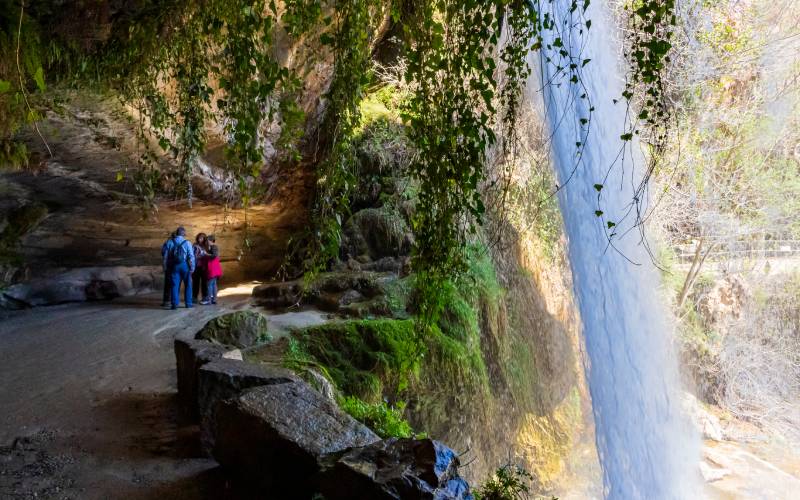 Also, and for hiking enthusiasts, there are several routes that can be done in the area. The simplest is the circular route that starts in Riells del Fai, passes through Sant Miquel del Fai and Turó de l’Ullar to return to Riells del Fai. There are 12 kilometers of trail that can be completed in just three or four hours and can be done by anyone who is minimally fit.

It is not the only leisure proposal linked to the monastery. Shows around the area or workshops for children or adults are relatively frequent. Of course, guided tours are also offered for all audiences. There is also an area for lunches and even a bar where you can enjoy a drink while you visit the area.

barcelona, Catalonia, monastery, nature, Route
It may interest you...