Within the remarkable architecture and the vast cultural offer available in Barcelona, we have a mandatory stop at El Poble Espanyol in the city. The site contains a piece of Spain’s most recent history within its walls. Furthermore, after a significant transformation, it has become a cultural reference point for the Catalan capital. A monument full of curiosities to arouse the interest of all kinds of public, from families to couples.

Created as a large open-air museum, its main attraction is to reproduce on a real scale the everyday architectural styles of the streets throughout Spain. The Poble Espanyol offers us a journey from the emblematic Aragonese tower of Utebo to the Way to Santiago without leaving Montjuic. Not in vain has it managed to establish itself as one of the essential points of interest in Barcelona and the surrounding area. 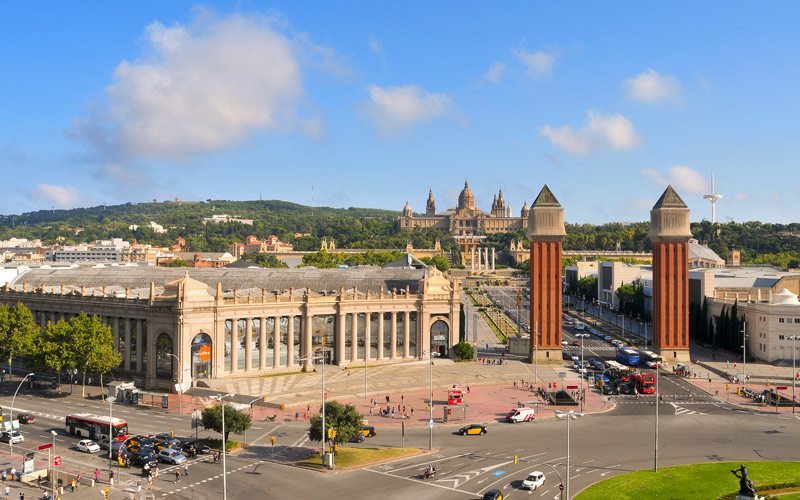 The Pueblo Espanyol in Barcelona was created as an ambitious project for the International Exposition of Barcelona in 1929. Held on the Montjuic mountain, the exhibition was an important industrial showcase for the city and turned Barcelona into a centre of European architectural avant-garde.

The architect Josep Puig i Cadafalch presented the idea and its design, leading a team that travelled around Spain to take photographs and gather information from all corners of the country. The aim was none other than to build the replicas of these buildings in the open air, capturing the essence of their original locations. Poble Espanyol officially became a Spanish art pavilion, with a surface area of 49,000 m2. Although the architectural complex was conceived as an ephemeral art, the result was so successful among the public that they decided to keep it after the exhibition.

The Poble Espanyol has managed to survive many unfortunate historical episodes since its creation. Not only did it experience the great crisis of 1929 first-hand, in the midst of the exhibition, but it also went through the Spanish Civil War (1936-39) in a rather unglorious way. It was first transformed into a prison camp and then into an anti-Catalanist control area by the dictatorship.

After several attempts at physical and image rehabilitation, in the mid-1980s, the city council actively intervened to recover the site. From the 1990s onwards, El Poble Espanyol in Barcelona gradually became an enormous open-air cultural centre with important artistic offerings: a museum where there is room for everything from crafts to avant-garde, including gastronomy.

Architecture and spaces in Pueblo Español 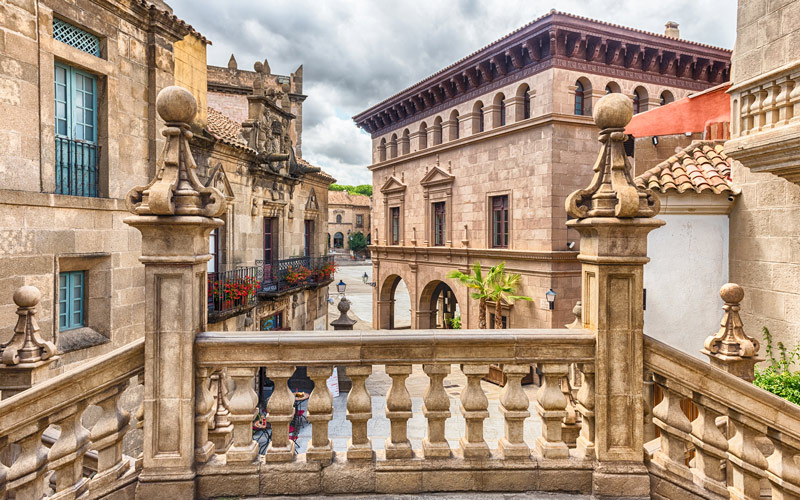 Examples of the architectural beauty of the Poble Espanyol. | Shutterstock

Architecturally, the Poble Espanyol contains an excellent sample of everyday places and relevant spaces in Spain. A walk where we can observe different samples of styles that have been given in the peninsula and part of its islands, from the Romanesque, to the Gothic or the Mudejar. It is divided into different regions, showing its most characteristic architecture. We can go from the incredible views of the city in the dedicated area of Catalonia to the narrow and winding whitewashed streets of the area of Andalusia. 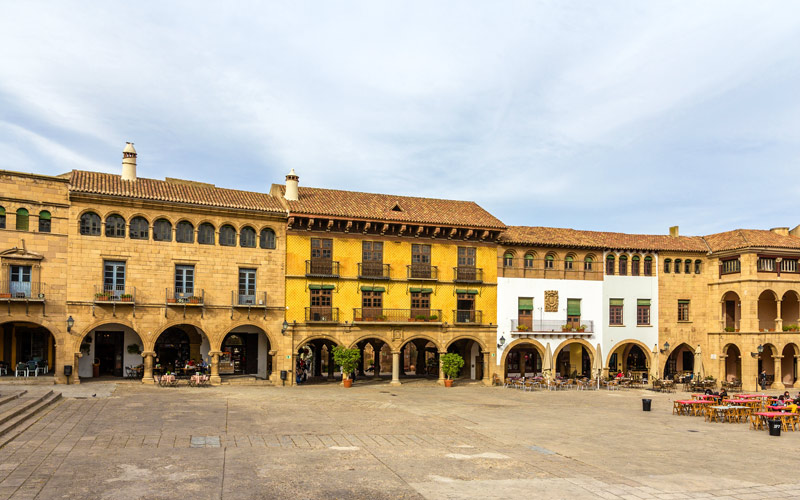 The Plaza Mayor is one of the most interesting places in the whole Poble. Built as a replica of the Plaza Mayor in Riaza, Segovia, it frequently hosts events of all kinds and open-air concerts for up to 5,000 people. But the contrast with the southern area is also worth noting, with typical Andalusian walls full of geraniums, or the monastery of Sant Miquel, which has elements from several Catalan Romanesque monasteries.

The variety of styles of the buildings and their careful aesthetics have made the space a regular venue for film locations as well. Perfume: The Story of a Murderer (2006) was shot in various corners of the Poble, recreating none other than 18th century Paris. 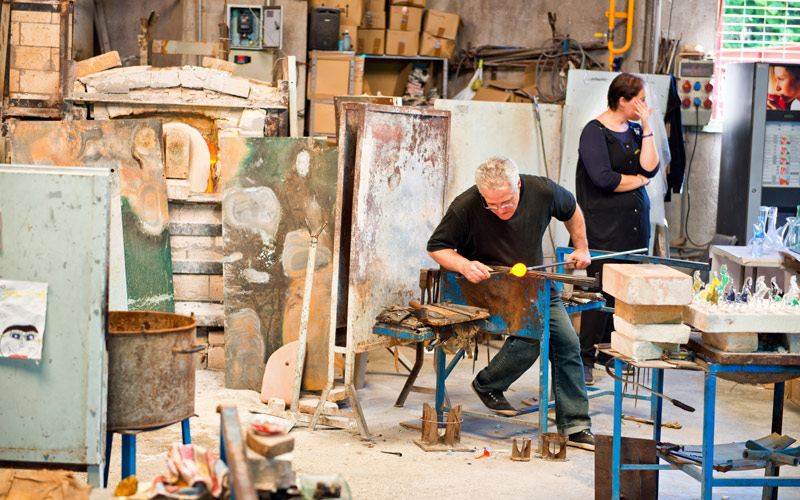 The streets of Barcelona‘s Pueblo Español not only transport us to different corners of Spain. They also include numerous charming establishments where many craftsmen have set up their workshops.

Catalonia enjoys excellent health in the world of craftsmanship in different aspects, from glass, to clay or jewellery. Aware of the importance of this field, the Pueblo Español has set up spaces in their streets where we can see different craftsmen working actively. And, of course, we can take home a wide range of products with the assurance that they have been made with exquisite handwork.

The Pueblo Español and the avant-garde 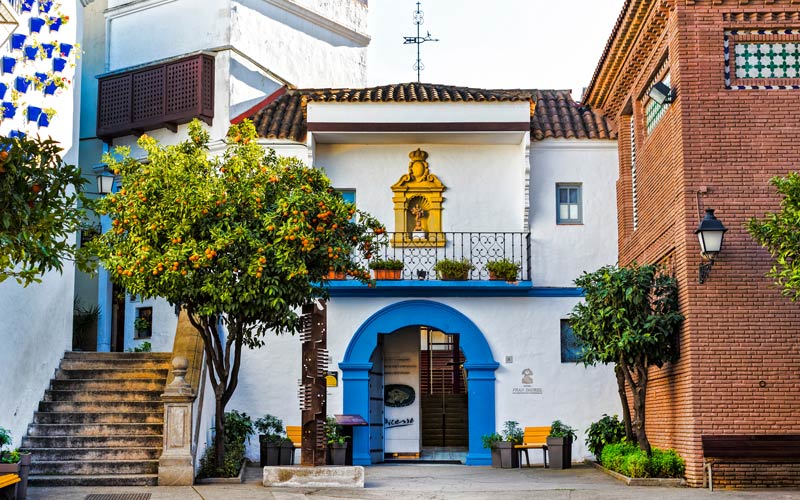 Barcelona and Catalonia’s commitment to art has been evident over the years through the official museums or their art galleries spread throughout the community. When we say that Pueblo Español is a great museum, it is worth noting that the offer also includes the avant-garde with interesting buildings and pieces to visit.

The Fran Durel Foundation of Contemporary Art, in the Poble Espanyol, houses important works by Miró, Picasso, Chillida, Dalí and Tàpies. Samples of paintings, drawings and sculpture that are worth knowing within the group. Next to the museum, the Espacio Guinovart, located inside a former convent, or the Jardín de Esculturas, complete the presence of contemporary art in the area.

Other activities in Pueblo Español

Its accessibility and the profound transformation of recent years have made Barcelona’s Pueblo Español a recurring place for visitors and locals alike. The agenda of activities is full of workshops for adults focused on crafts, as well as leisure options for children and families. Music, as we have mentioned, has a notable presence and it is common to find cycles of concerts and festivals in several of the locations. 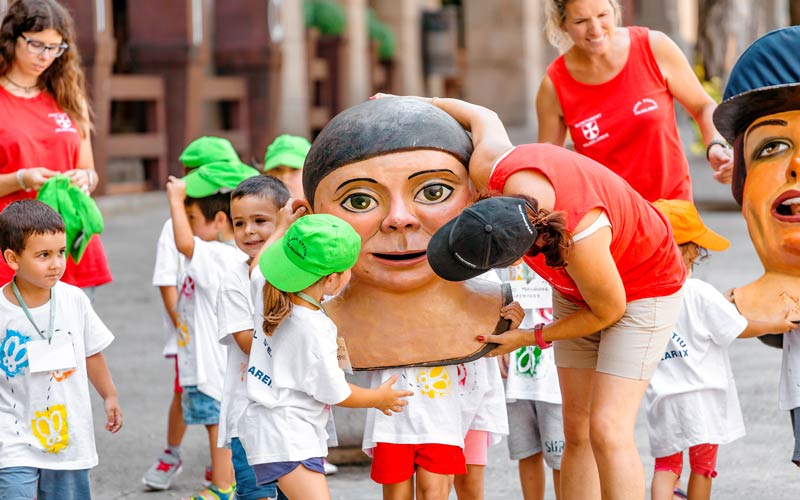 Children have an important place in the planning of cultural activities in the Poble Espanyol. The water festival, for example, has become a regular feature of the site. Focusing essentially on a children’s audience, it is one of the many activities available in the open air.

There are also summer camps for children and numerous excursions and itineraries designed for them. There is a wide range of workshops available throughout the year, for both primary and secondary school pupils. In any case, all the activities are closely linked to culture.

Preparing the visit to the Poble Espanyol

The structure of the village is configured to be enjoyed from different perspectives, both by taking a walk autonomously and under its guided tours. The summer months in Spain are usually the most suitable for enjoying the facilities due to their open-air location. It is worth remembering that in this case it is better to go early in the morning and be prepared to fight the high temperatures.

The official website of the Poble Espanyol contains the relevant information to plan our visit in the best way and make the most of the tour. Tickets can also be purchased in advance to avoid possible queues. 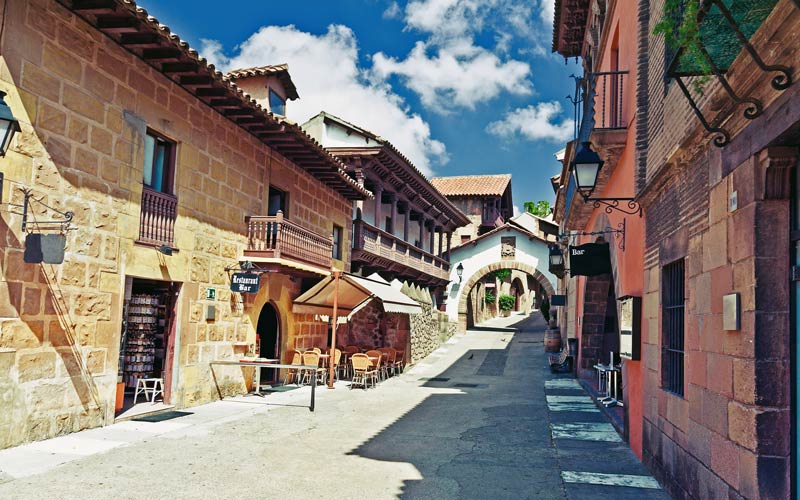 Urban archetypes of the streets in Pueblo Español. | Shutterstock

It is possible to hire everything from guided tours to a group activity to discover the village with a detective’s game. It can be easily reached from any part of Barcelona by public transport, so that we can forget about the car and where to park it in a big city.

Simply strolling through the streets of the Poble Espanyol is a pleasure that we owe to ourselves if we approach Barcelona and especially the area of Montjuic. The mountain also has a gastronomic offer that can be extended with the restaurants and establishments that are in the surrounding area. A different place to enjoy a fun excursion linked to art and culture in its many facets.

barcelona, bridges, Catalonia, museums, squares
It may interest you...