Where Almanzor lost his beat

Calatañazor is a picturesque, historical and artistic site located in the Valley of Blood, where the great Muslim leader Almanzor suffered a mythical defeat that changed the history of the Reconquest.

Plan your stay in Calatañazor

What to see in Calatañazor is basically outside, so the visit of the walled enclosure and the recommended walk to see the town from the plain can take us two or three hours. Nearby there are two natural spaces with its visitor center: its beautiful sabinar and the Natural Monument of La Fuentona; There you can spend the rest of the day and several more. The escape can continue in the nearby towns of Burgo de Osma and San Esteban de Gormaz; It is also possible to visit Soria capital.

This municipality is near to Voluce, that outside village of the arévacos and that the Romans denominated Veluca or Volcia and that must have been inhabited until century V.

The Arabs named it Kalat al-Nasur (Castle of the Vulture) that is still very appropriate because they are still observable many examples of vultures from its height.

In July of 1002 in the Battle of Calatañazor the armies of Leon, Castile and Navarre inflicted a bloody defeat to that of the Moorish leader Almanzor; According to Al-Maqqari – a Muslim author of the seventeenth century – there Almanzor could have suffered the wound that a month later, in Medinaceli, caused his death. It popularized the saying “In Calatañazor, Almanzor lost the drum”. To that allude the verses that dedicated to him in 1922 Gerardo Diego and that they are collected in a stone of bronze on the monument to Almanzor. Given the errors made by the chronicles of the time, some historians believe that this battle was more myth than reality. Curiously, about 43 kilometers away, in the vicinity of San Esteban de Gormaz, there is another town that changed its original name from La Guía (due to its patroness, the Virgin of Guide) by the expressive name of Matanza de Soria, because Of a subsequent battle to that of Calatañazor, in which there were massacred more troops of Almanzor.

In the Middle Ages the town was lordship of the lineage of Padilla, Adelantados majors of Castile. There was born in 1334 Maria de Padilla, who was the lover of Pedro I before and after their two marriages; In 1362 the king declared before the Courts of Seville to have contracted marriage first with Maria which earned him the recognition of queen and turned their children into heirs of Castile. 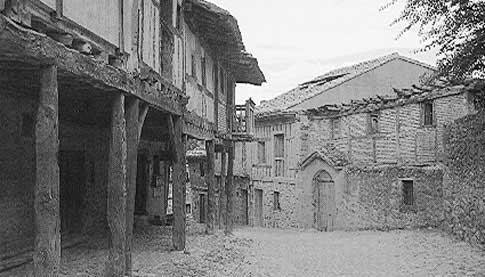 In 1456 King Henry IV confirmed the privileges of the town, something also made by the Catholic Monarchs (in 1477) and King Charles I (in 1530). These manuscripts are preserved in the museum installed in the current parish. Of its importance gives idea that in 1460 was the head of a Community of Villa and Land that comprised eighteen towns.

In the seventeenth century it became part of the duchy of Medinaceli. At the beginning of the nineteenth century it would cease to be a manor to become a constitutional municipality, incorporating years later the villages of Abioncillo and Aldehuela de Calatañazor. It was declared National Historic and Artistic Ensemble in 1962. In Calatañazor scenes were recorded of the famous films Bellados at midnight (Falstaff, 1965) by Orson Welles and Doctor Zhivago (1965) by David Lean.

In Abioncillo a cooperative of teachers created, in 1983, the Pueblo School of Abioncillo to develop pedagogies oriented to the environmental education, with an archeological room.

What to see in Calatañazor

What to see in Calatañazor is basically outside, so the visit of the walled enclosure and the recommended walk to see the town from the plain can take us two or three hours. Nearby there are two natural spaces with its visitor center: its beautiful sabinar and the Natural Monument of La Fuentona; There you can spend the rest of the day and several more. The escape can continue in the nearby towns of Burgo de Osma and San Esteban de Gormaz; It is also possible to visit Soria capital.

On a large walled rock, which is also the ruins of its castle, we find the epic villa of Calatañazor. To the right, before entering the walled enclosure, there is the Romanesque Hermitage of the Soledad, of a single nave covered with vault of pointed cannon, apse with vault of quarter of sphere, three loopholes or saeteras (denoting its building As part of the villa’s defenses), embossed circles and diamond tips. It preserves a rich sample of anthropomorphic and animalistic canecillos and the figure of a musician sitting between beautiful cornices. The triple archivolt cover is decorated with vegetable motifs. Close to it, surrounded by vegetation, there is the cover of the Old Church of San Juan Bautista.

The visit takes place through a steep street that ascends through the wall, is paved with boulder. On both sides of this main street, as well as in the adjacent, you can see original examples of popular architecture of the area, centuries old, They are houses built in a rather rough form, in stone and adobe; With conical chimneys that mostly have been covered to prevent the entrance of the snow in winter, remembering the espantabrujas of the High Aragon. Some buildings have arches supported on columns of juniper wood, the rooms added to the houses on the porch were built in brick and wood, in contrast to the rest of the main body of these buildings. Also worthy of attention are the rejerías and latchers of pampering. It is a group that has retained its environment remarkably well; To understand the local way of life you can visit the ethnographic museum installed on Calle Real.

The Church of Santa Maria del Castillo has its main facade in Romanesque style. It incorporates a large rosette, three blind arches; It is very unusual its Arabic style alfiz framing its Romanesque cover of three archivolts. Look at the intermediate archivolt, especially decorated; All of them are based on capitals with birds, taps and vegetable motifs. It is a hall-floor building, with a single nave, which was attached to a tower on its north facade. The apse was rebuilt in the 16th century in late Gothic style, while the nave and the choir are from the eighteenth century. In its interior there is a baptismal font dating from the 11th century and a major altarpiece from the 16th century, with the Romanesque carving of Our Lady of the Castle. Also look at the important Christ of the Amparo, also Gothic. In its interior also there is a Museum that includes flamenco tables, like the one of the Virgin Dolorous of the XV century, and other Castilian to see in Calatañazor; Sculptures, custodies of silver and other artistic objects, such as the valuable collection of Letters-puebla, which contains the confirmations of their privileges.

In the Plaza Mayor has been installed the so-called “Stone of the Fan”, a fossil of leaves and stems of palm, which is attributed an age of between 11 and 20 million years. In it is also the Rollo-pillory of justice about which legends of witchcraft are related.

In the Plaza Mayor has been installed the so-called “Stone of the Fan”, a fossil of leaves and stems of palm, which is attributed an age of between 11 and 20 million years. In it is also the Rollo-pillory of justice about which legends of witchcraft are related.

From the castle of the fourteenth and fifteenth centuries remains the Tower of Homage; Built in masonry with reinforcement masonry in the corners. Some of the stones indicate that they belonged to the Arab fortress. On the side of the village has a moat and on the side of the valley retains a part of the wall, also the northwest and south, with a small door. At the foot of the castle have been found three anthropomorphic graves excavated in rock of century X. The castle was property of Doña María de Molina, the Padilla and the dukes of Medinaceli.

Two kilometers from the village lies the Natural Area of ​​the Sabinar de Calatañazor with a small forest of sabina albar, some of whose trees exceed three centuries old. Seven kilometers, in the direction of Muriel de la Fuente, is the place of La Fuentona, which has been declared a Natural Monument, and is the birthplace of the river Abion. Later it receives the waters of the source of the Pumpkin and constitutes a canyon that can be crossed by walkways The House of the Park of the Sabinar and the Fuentona, in Muriel of the Source, is located in the old palace of Santa Coloma. From there you can go to the Parque Natural del Río Lobos Canyon.