From wool wealth to the cinema and tourism

Bordered by the Cega, San Miguel and Vadillo streams, this medieval town stands out for its architectural conservation. There are numerous places to see in Pedraza de la Sierra, both in the town centre and in the surrounding area. The visitor will also find a wide range of grills.

In Pedraza de la Sierra, time stood still. A small village that can be visited in half a day, as the attractions are outside. The exception is its extraordinary medieval prison (one of the best preserved in Europe) and a site that must always be seen in Pedraza de la Sierra.

About thirty kilometers around it there are numerous attractions to continue the trip. To the north is the medieval town of Sepúlveda, flanked by the spectacular park of the Hoces del río Duratón. To the south, nature lovers can climb up to the Guadarrama Park.

On our page Sleeping and on the page Eating in Pedraza de la Sierra we inform you about the local dishes and where to book for your stay.

There is evidence of a prehistoric population in the open caves of the Cega River. Ceramics from the Celtic-Iberic populations of arevacos or vacceos (until 4th century BC) were found.

The name Pedraza derives from the latin Petracia or Petrazan. King Alfonso X placed the birth of the Emperor Trajan in Pedraza. His nephew, Saint Eutridius, suffered martyrdom in Pedraza in 87. The consensus among researchers is that the emperor’s family was from Italica (Seville) and he was born there.

The exact history of this town is slightly unclear as there have been numerous falsifications and documentation forgery. For example, Pedraza appeared for the first time in the Voto de San Millán (938) as one of the towns ordered by Count Fernán González, although many historians believe this to be false.

It is known with certainty, however, that Sepúlveda and Pedraza were conquered by the count in 940. But his son, Count Garcia Fernandez, was able to return them to Almanzor in 984. Between the years 1010 and 1023 his son reconquered it, Count Sancho Garcia. As a curiosity, both were the protagonists of the legend of the Countess Traitor, the most famous medieval soap opera.

In November 1076, King Alfonso VI confirmed the Fuero latino de Sepúlveda, that included Pedraza. In the following years, Pedraza and its borders were recognised by both Pope Calixto III and Fernando IV.

In 1294 Sancho IV the Brave granted a tax exemption to the inhabitants of Pedraza de la Sierra. An autonomy that turned it into a land community. Until the middle of the 14th century it was a royalty town.

It became a lordship of Fernando Gómez de Albornoz and later of the García Herrera family. Among them was the wife of Bernardino Fernández de Velasco, who received Pedraza as part of his wife’s dowry.

At that time a famous duel took place for the possession of Pedraza in front of the town’s door (the main building to be seen in Pedraza de la Sierra). The winner, Iñigo, undertook the enlargement of the castle at the beginning of the 16th century. 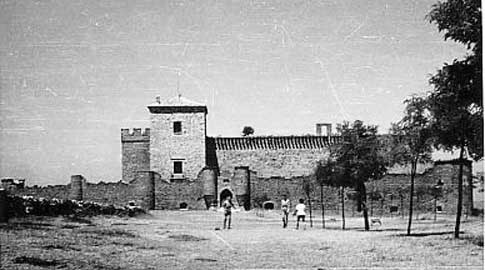 Being a lordship of the Velascos -Constables of Castile- in the War of the Comuneros Pedraza de la Sierra sided with the Emperor Charles V. An apocryphal story from the 17th century stated that in 1528 the sons of the French King Francis I were imprisoned in the castle of Pedraza de la Sierra.

Documents from that time locate the French princes in the nearby castle of Castilnovo (included in what you see in Pedraza de la Sierra), which also belonged to the Velascos. This led to confusion between the two castles of the family of the constables and the mistake of the later chronicle.

Between the 16th and 17th centuries, the transfer of merino sheep to sheer ranches and wool washings contributed to the richness of the village. Looms and workshops were also built, dedicated to linen production. Pedraza was so rich that it soon grew to five thousand inhabitants. However, the village prosperity declined during the second half of the 18th century, as the livestock and workshops were affected by the War of Independence.

In 1925 the painter Ignacio Zuloaga bought ruins from the castle for 12.999 pesetas where he painted a landscape of the village as well as two portraits of the inhabitants.

In the following years, the village was discovered by filmmakers like Jacques Catelain and Florián Rey, who used it to films movie scenes. It was later visited by other creatives such as Saénz de Heredia, Luis Lucía, Orson Welles, Pilar Miró, and José Luis Cuerda.

In 1951, the Marquis de Lozoya declared Pedraza de la Sierra an important monument. Four years later, Camilo José Cela arrived in the town on one of his journeys through Castilla. Since 1991, the Village Foundation of Pedraza started organising the famous Conciertos de las velas (candle concerts), celebrated each July in the town square.

What to see in Pedraza de la Sierra

Pedraza de la Sierra is a village where it feels as time has stopped. It is a small town you can visit in half a day, but do not forget to see its principle attraction: one of the best medieval jails in Spain. Some thirty kilometres near the Pedraza, there are numerous attractions to visit during your stay in this area. To the north, you will find the important medieval village of Sepúlveda, highlighted by the spectacular natural park with vultures of the Hoces del río Duratón. To the south, nature lovers can ascend to the port of Navafría to journey through the Guadarrama Park.

We recommend starting your journey on the outskirts of the city and doing it by foot. The first thing is Ermita de la Virgen del Carrascal or “of San Miguel”, and the medieval aqueduct. The latter carried water from the spring to the Caño fountain located next to the road.

Climbing up the slope to the left, you can see the enormous old watchtower, Pozo de las Hontanillas. Next, see the Puerta de la Villa, where the celebrated fight took place between Iñigo Fernández de Velasco and Count Benavente.  The door is open at the bottom, leading to the medieval prison, which is one of the best conserved jails in Spain. This prison is a must see in Pedraza, where you can take a tour through its dungeons and learn more about the medieval prison system. 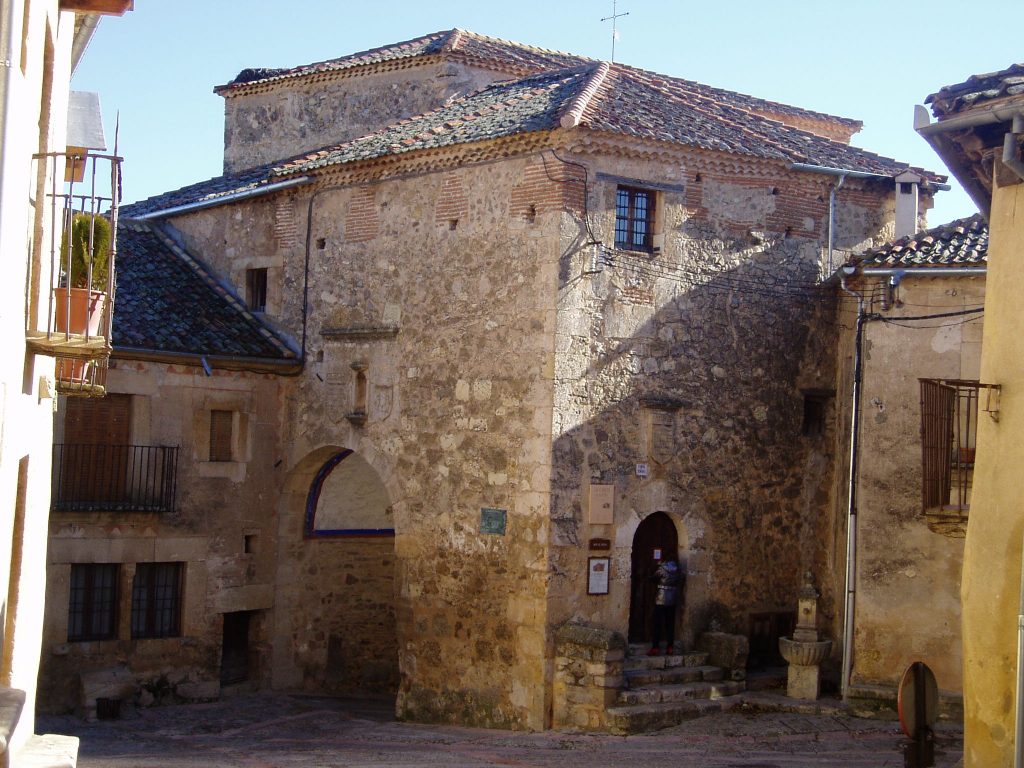 There are three streets that will take you to the town center, the middle of which is Calle Real which leads directly to the square. To the right is the street Calle de la Calzada which follows the route of the wall and leads to the Santa María Church. To the left, Calle de las Cuestas will take you to the “Gurugú” ravine and the Pozo de las Hontanillas well.

Walking up Calle Real will give your a wonderful tour of the beautiful houses along this street. Walk to the left to come upon Casa Pilatos, which has a beautiful balcony from the 16th century, owned by the famous Ladrón de Guevara family. The Tourism Office is located on the right, distinguished by its graffito decoration. The entire block to the left is taken up by the impressive Casa de los Becerril, which overlooks Plaza Mayor.

Pedraza’s Plaza Mayor has columns extracted from the castle ruins in the 19th century. You can also enjoy the impressive balcony and stone gargoyles of the Caserón de los Miranda, built in 1673 and is used today as a tavern. Nearby you will find La Farmacia, a famous pharmacy from the 16th century. 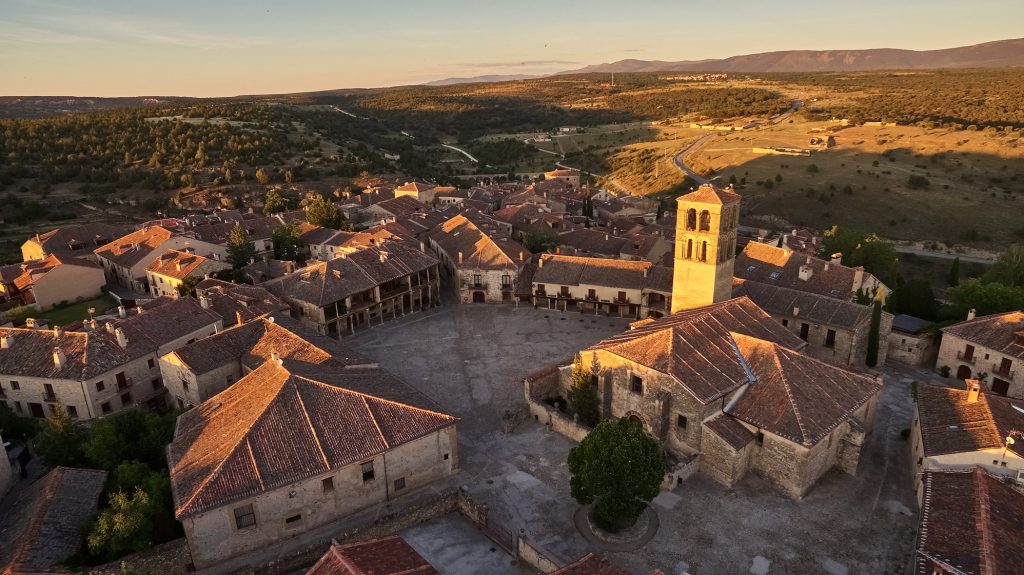 In front of it is the City Hall, in the old Palace of the Marqueses de Lozoya. Below the city hall there is a passage that leads directly to La Casona, which belonged to the famous decorator Paco Muñoz. Returning to the plaza, between the Casa de la Comunidad de Villa and the church is the “green balcony”, a medieval privilege where Antonio Pérez de la Torre and Zúñiga could view the bullfights.

The Church of San Juan conserves Roman elements. In the 20th century, the gateway before the main door was walled and overlaid with the facade of the ruined church of Santo Domingo. In the interior, you will find a Baroque altarpiece, an excellent organ from 1847  and an 18th century baptism cell. Its back door leads to the Plaza de la Olma, which holds a market every Tuesday.

From the Plaza de la Olma to Calle Mayor, you will find the rest of the Palacio del Conde de Pineda and an alley that leads to El Corral de la Joaquina. Following Calle Mayor will bring you to the Santa María de Mediavilla temple, containing Romanesque apses, Moorish windows in the tower, brick arches, and Romanesque and Baroque elements.

The Castle of Pedraza

The Castle of Pedraza was burned in 1813 by the French garrison, causing Pedraza to lose all documentation. It could have been a Roman fort, but the oldest parts are identified as foundations and walls from the 18th century. Throughout the years, it was passed between many powerful families like the Herreras and the Velascos. At the end of the 15th century, Iñigo Fernández de Valasco and his son Pedro build most of what you see today: the double enclosure, square towers, and an artificial moat built into the rock. In 1925, painter Ignacio Zuloaga purchased the ruins, rebuilding the tower as a homage. At the end of the 20th century, his successors built a wing in the second tower where there are currently a dozen of works by the painter and is now rented out for weddings. 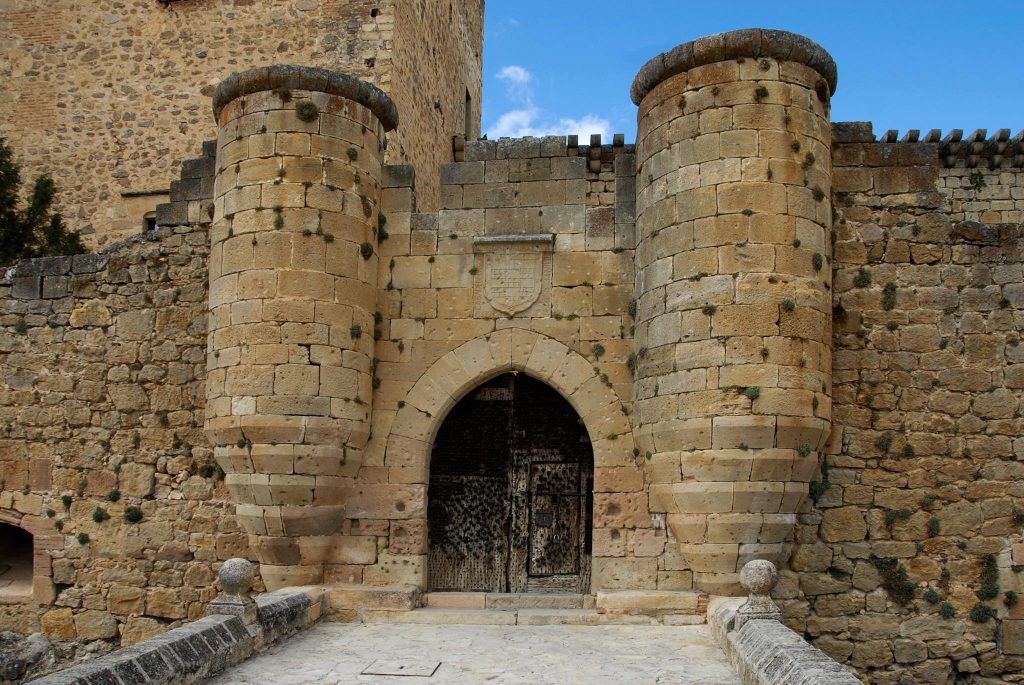 Returning to the town on the left, you will see the ruins of the Santa María church and the Muebles Artesanos (furniture shop) from the Cristóbal dynasty. In front of this is the artisan workshop and stores of Estaños de Pedraza, where craft lovers of all kinds can find all sorts of crafts and handiwork. Advancing to the door of the Villa, you will find the ruins of Santo Domingo to the right, a Baroque church dismantled in the 19th century. In front -in the Jewish quarter- is the what was the House of the Inquisition, which is today the Hostería Zuloaga.