Villa of the Romanesque miracle

Known as “Villa del Milagro,” Tierra de Campos is at the edge of the Canal de Castilla, and houses one of the finest examples of Romanesque architecture worldwide.

Plan your stay in Frómista

A must see in Frómista is the extraordinary Church of St. Martin; but in the town itself and its surroundings there are several Romanesque churches worth visiting. We therefore consider this a full day getaway. For those of you who have more time, you have two alternatives to continue enjoying the Romanesque Palencia: near and northwest is Carrión de los Condes, while the motorway to the south you reach the city of Palencia.

In the vicinity of a settlement of a Roman villa called vacceos Frumesta (Latin frumentum, for the abundance of wheat in their fields) this town was built. It kept thriving with the Visigoths until it was destroyed by Muslims.

The Middle Ages is the time of splendor in Frómista. On June 13, 1066, Doña Mayor, widow of King Sancho Garcés III of Navarre, constructed the Monastery of San Martin. In 1118 the monastery was owned by Queen Urraca of Castile, who donated it to the Benedictine monks of San Zoilo in Carrión de los Condes.

Between the twelfth and fifteenth centuries the town remained divided in two jurisdictions: the San Martin depended on the abbot of Carrion de los Condes, while the rest of the village were managed by the house of Benavides, the lords of the villa. One of these gentlemen, Gomez Benavides, founded in 1436 the monastery of Our Lady of Mercy, of Benedictine monks, in an effort to unify both jurisdictions.

The presence of Jews in the history of Frómista was favored by the persecutions to which subjected them Almoravids and Almohad reaching counted more than a thousand people in the late fifteenth century. In 1453 Pedro Fernandez de Teresa did not return a loan to the Jewish Matudiel Solomon; to be denounced Christian received a warning of excommunication, and paid the Jew due. But that is not confessed and received absolution for the sin committed and being at death’s Pedro tried to communicate, but the priest found himself unable to supply the host, because this was completely attached to the calyx. Once obtained confession and absolution, the priest could give him another host, while the “resistant” was preserved as a relic; Fromista thus acquired the nickname “Villa del Milagro”. 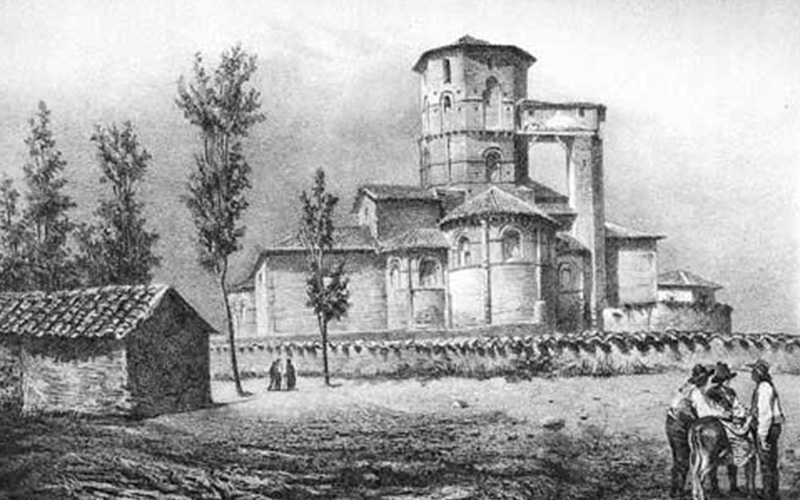 San Martín of Frómista before its restauration

The expulsion of the Jewish community in 1492 began a long decline that only ended in 1773 with the construction of five sluices Castilla Canal. This led to the irrigation, transport and the emergence of flour mills.

In the twentieth century, the possibilities offered by new irrigation ditches and tourism derived from the Camino de Santiago improved its economy.

What to see in Frómista

A must see in Frómista is the extraordinary Church of St. Martin; but in the town itself and its surroundings there are several Romanesque churches worth visiting. We therefore consider this a full day getaway. For those of you who have more time, you have two alternatives to continue enjoying the Romanesque Palencia: near and northwest is Carrión de los Condes, while the motorway to the south you reach the city of Palencia.

The visit to Frómista can start in the Plaza de San Telmo, presided over by the statue of the saint. The old hospital was renovated and became a hostel for pilgrims. Facing it is the Church of San Pedro, Renaissance façade temple and Gothic interior with three large naves separated by pillars. The Museum installed inside houses an altarpiece with Deposition of Castilian school, several canvases School Bank and Mengs, and Hispanic-Flemish panels from the altarpiece of Santa María del Castillo (stolen in 1981 and recovered shortly thereafter).

The extraordinary Church of St. Martin is the star of Frómista heritage and an essential monument of Romanesque world. It stands in the Plaza del Obispo Almaraz, near the center of town. It was the temple that served the missing Benedictine monastery that was already under construction in 1066. Erected in recent decades in XI century in plan and elevation reproduces the Cathedral of Jaca, but with half of its proportions. Outside, harmony derived from the staggered arrangement of the ships, most central point, the three apses, outstanding central, octagonal dome on a square base that illuminates the transept and the two cylindrical towers flanking its main entrance. Passing into their windows draw attention flared half point, its lines of checkered imposts are decorating the walls at different heights; also carved in stone capitals with vegetal, zoomorphic and human reasons. Its authors were two different workshops: the head was executed by stonemasons with hispanorromana and creative training, while the rest is the work of another, being skillful, lacks culture and imagination. The church is presided over by a Gothic crucifix from the thirteenth century.

On leaving the church Miracle Street we reach the Piedra del Milagro, built in 1453. In its vicinity is the Ethnographic Museum Rodolfo Puebla, which houses more than 700 pieces in relation to the activity of the region: harness horse carriage, carts rods, yokes, cattle, and other related vintage, dovecote, killing, dairies or hunting. Also nearby is the Cheese Museum, housed in an old granary restored where goods are exhibited employees in the craftsmanship of pure sheep cheese that is sold in your store. It has a room for temporary exhibitions of photography, painting and sculpture. 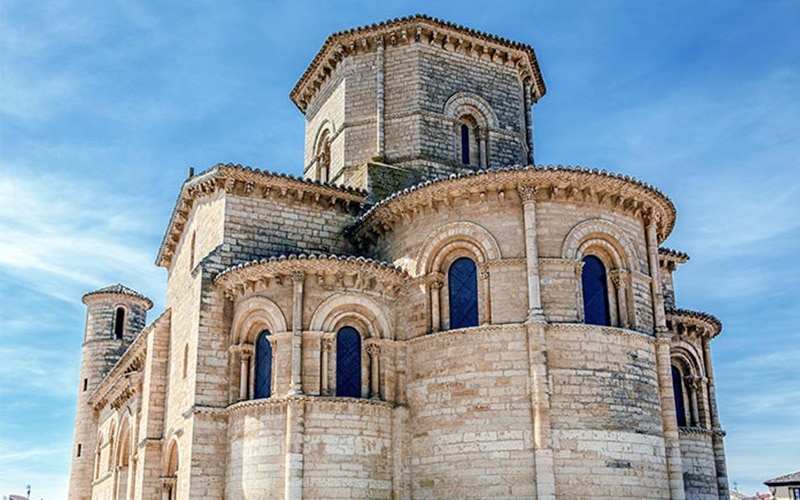 One of the sides of San Martín de Frómista

Another important church to see in Frómista is Nuestra Señora del Castillo, whose namecomes from being built on the site of a castle.

La Ermita de Santiago or Otero, set away from the town center, fell into a state of neglect which caused only left standing the cruise of the original building which houses the statue of the patron saint of the town, Nuestra Señora del Otero (the XIII) century.

For a matching path with the path of Santiago, through landscapes of shore, you get to Boadilla del Camino. In addition to its adobe houses preserves a pillory or jurisdictional roll of the sixteenth century and a church with Romanesque remains.

In car, we recommend taking the N611 towards Palencia, Piña de Campos and its remarkable Church of San Miguel, from the sixteenth century, which also has a museum. A detour leads to Támara southeast where the church packaging Cathedral of St. Hippolytus the fourteenth century and the Romanesque chapel of the twelfth century castle. Continuing south you can see the church of San Pedro in Amusco, known as the “Pajarón de Campos” and just outside the village the hermitage of Nuestra Señora de las Fuentes Romanesque transition between the twelfth and thirteenth centuries.