In the eastern part of the mountain range of León, the prelude to the Picos de Europa, a beautiful place is shown, impossible to say hidden. The mountains are shelter and guardians of a reservoir that takes care of a small village. Idyllic. Fairytale. Magical. And all those adjectives that many will see reflected in the traces of Riaño.

In the water, boat rides, canoeing, even paddle surfing. On land, hiking, climbing. Pure nature, you might think. But 40 years ago Riaño was not this. Riaño has always been green, yes, but the blue tinge of the water came from the blood drained from the hands of an unwanted reservoir. A reservoir that flooded seven villages and part of two others under its waters. Villages that are no more. Villages to which it will never be possible to return. Riaño is this beautiful landscape and the wound that still oozes pain today. 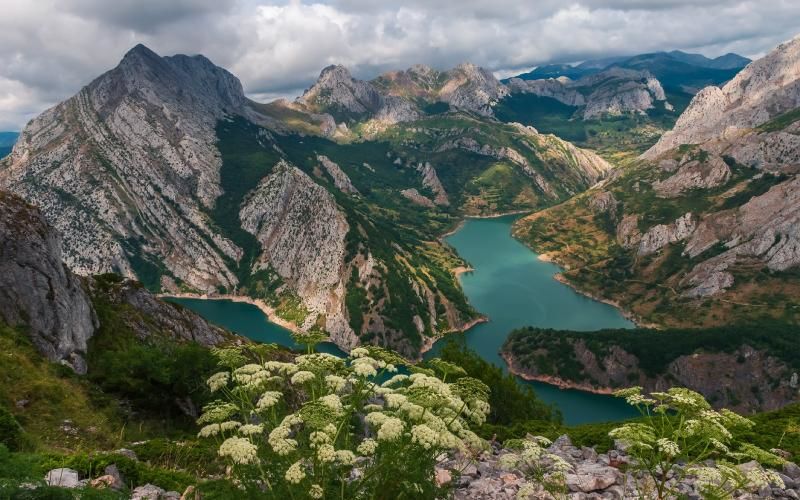 Riaño Mountain y Mampodre Regional Park, from the Gilbo peak, one of the routes that can be done in the area | Shutterstock

‘The murder of the village where I was born’

‘Riaño is a new town born from an accident of life. Well, rather from a murder, the murder of the town where I was born’. With these words Alfonso González, neighbour of Riaño and present in the demolition of the preceding landscape, referred to what was his home for 22 years in an interview published by RTVE in 2010. Known as Fonso in the village, he has just published, by the way, a novel titled Tocan las campanas a Concejo, a book that tells the neighbourhood struggle that took place in Riaño. But, what was so serious that even after 30 years it cannot be forgotten?

Riaño is a municipality and a village located at the crossroads between Asturias, Cantabria and Palencia. It rises 1,133 meters above sea level in a León integrated in the Cantabrian Mountain Range, of which it is part. It is also the youngest village in the province, since it was built in 1987 as a cruel substitute for the old Riaño, which was buried by the reservoir along with six other villages and part of two others. Thus, the rubble of Anciles, Salió, Huelde, Éscaro, La Puerta, Pedrosa del Rey, Riaño and part of Burón and Vegacerneja slide under the surface of this beautiful wasteland. 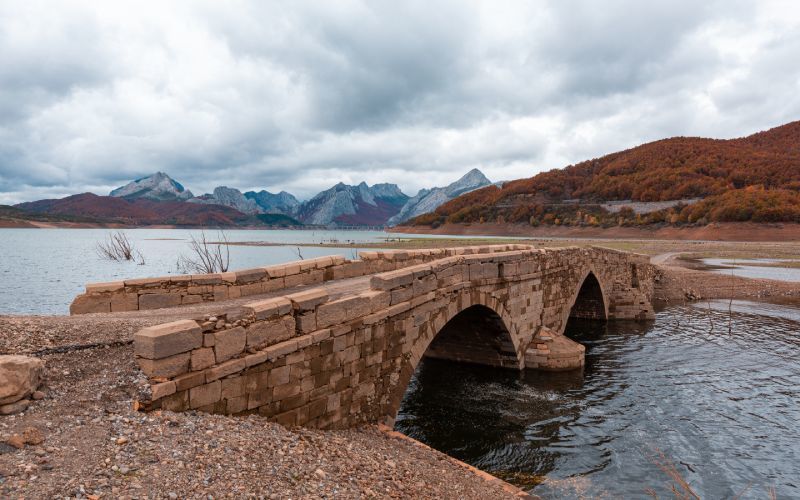 Old bridge of the disappeared village of Pedrosa del Rey. When the level of the reservoir is very low you can still see it. | Shutterstock

Before being flooded by the waters, Riaño was a valley inhabited by those nine villages. One in which livestock was the main source of wealth. In fact, since the mid-nineteenth century, it was a livestock reference for the entire province of León. The countryside was also a means of subsistence for those countrymen, together with a tourist sector that proliferated quickly. Two neighbours remembered in the RTVE interview that ‘in the Riaño of before you had everything’. ‘There were two pharmacies, there were four bakeries, a national camp, a tourist parador, a court of first instance, a couple of hardware stores and at least half a dozen food stores…’, they said.

A shadow over Riaño

However, already at the beginning of the 20th century a black-winged shadow began to hover over that natural paradise. The name of Riaño was included for the first time in a plan of hydraulic works that foresaw a new future for this Leonese municipality. Fortunately, that project remained paralyzed in limbo for decades. Meanwhile, time did not pass in vain for Spain. The country went through the end of a monarchy, the beginning and end of a republic and a civil war. It was already in 1963, with Franco’s regime already mature and established, when the threat once again showed its fearsome claws.

That year the National Hydrological Plan, in the midst of a reservoir construction, once again set its sights on Riaño. In 1965 the works began and the shadow took on its own form with the construction of a huge concrete wall 110 meters high, which was completed in 1971. But the works were again paralyzed for more than 10 years. Why? 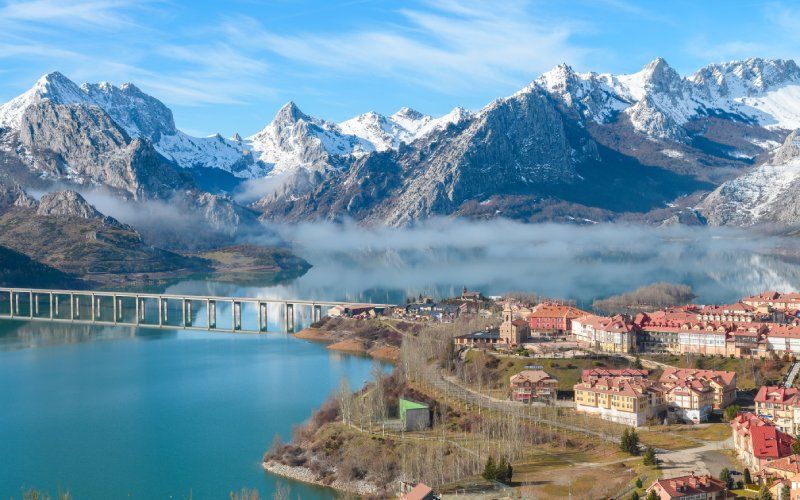 Views of the village of Riaño next to the reservoir | Shutterstock

‘The expropriation process was all nonsense because the property was not evaluated and then compensated, but sometimes many years passed, nobody claimed new appraisals, nobody advised the neighbours…’, said the former mayor of Riaño in the 80’s, Guillermo Hernández. In 1975 the company that had contracted the works had its contract terminated. Franco died and the whole country remained pending an uncertain future. The construction of the reservoir would have to wait. With the arrival of democracy, the people of Riaño began to believe that the project would not go ahead.

The construction of the reservoir, a symbol of powerlessness

Then came the year 1983, when the first elections for the Board of Castile and León were held. Jaime González, who was elected as Minister of Agriculture, proposed to the central government to resume the infamous works on the reservoir. The government of Felipe González agreed. The sentence of those nine towns was signed with the excuse that tens of thousands of hectares of land in the south of León could be irrigated. To flood some lands and irrigate others. To give life to some and kill others. And so it was.

In 1986 the works were retaken. That year part of the municipality was demolished to build the viaduct. In 1987 machines and police returned to finish the work. In the midst of this, there were police charges, neighbours clinging to the roofs of their houses and people who were left with nothing, without their livestock, without their houses, without their roots. The photograph taken by Mauricio Peña went around the world showing the impotence and pain. In it, the neighbour Vicente Alonso wielded a club in a fit of rage, a club against the agents. His sister Paz stood in his way. The neighbours would not leave their homes without fighting. Worst of all was the suicide of Simón Pardo, a tenant who could not stand the situation.

Vicente Alonso sees the civil guard charging against a group of young people from Riaña who oppose the construction of the reservoir, and goes to them, his sister Paz tries to stop him.

Even so, the demolition machines demolished the municipality. In total, 60 houses were demolished and forcibly evicted. At least 33 families were forced into exile. After the debacle, many left Riaño, especially young people. Others faced a new home that looked barren and strange. A Riaño without Riaño. At the beginning they had to settle in second homes, in hotels, in relatives’ houses, in tents… Since, at that time, in the New Riaño only the town hall and some private houses were built.

‘Now our life is gone, because we live with this, with the plain, and this is covered with water. I used to pick 16, 18, 20 kilos of basil and now I have nowhere to pick anything. And the cattle had to be sold because, if not, we were exposed to losing them,’ said one of the former residents of Riaño. The population decreased drastically: in the 1970s there were more than 1,500 people and in the 1990s there were barely 500. 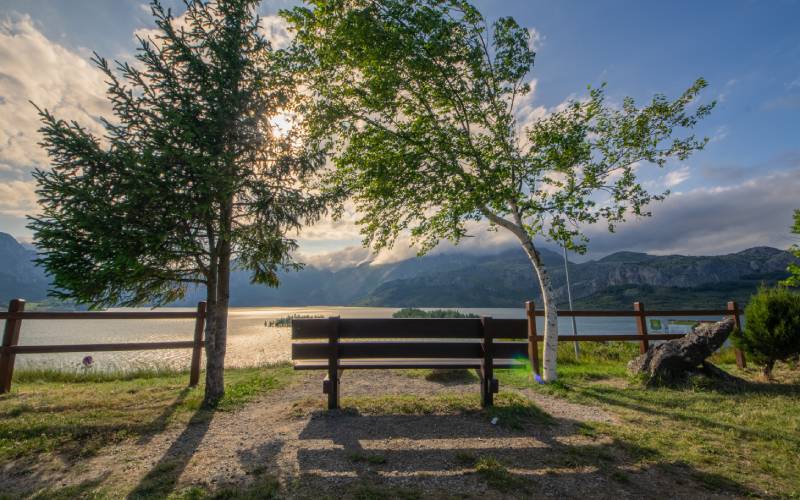 The so-called most beautiful bench in León, Riaño | Shutterstock

Fortunately, the residents of Riaño have been able to reinvent themselves and, although with great regret, many moved from livestock farming to the hotel business or the brick industry, betting everything on a new lifestyle: tourism. Although there have been difficult years, it seems that the town is now experiencing a good moment. The reservoir, which has not fulfilled nearly the function for which it was conceived, is now used as a recreational space. A bench rests next to the hermitage of Nuestra Señora del Rosario, baptized with the name of ‘the most beautiful bench in León‘. The largest swing in Spain was also installed here not long ago, an eight-meter high swing that swings over a dreamlike landscape. 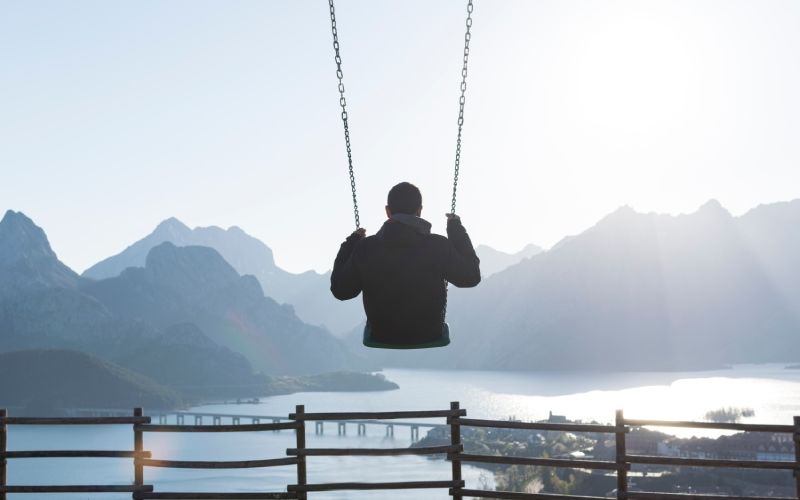 Of the enclave that perished under the waters of the reservoir some vestiges remain. The church of San Martín was moved stone by stone from the buried Pedrosa del Rey. The square of Cimadevilla has more remnants of another time. A granary, a horseshoe rack or a shepherd’s hut are some of the elements that crowd the esplanade. Even older are the pieces on display in the Ethnographic Museum, which exhibit other lifestyles from very remote times. In addition to the active tourism in the reservoir, the routes offered by the mountains.

Riaño is part of one of those reborn villages that has fought tooth and nail to get back on its feet. It is a perfect town for rest or, on the contrary, for activities. But, in any case, a perfect village to disconnect. Meanwhile, the neighbours make sure that the memory is not lost because as a song says ‘although my land does not exist, I carry it here with me‘.

Castile and León, León, mountain villages, nature, riaño
It may interest you...