In the 1980s Matavenero was a ghost town. León‘s weather had left ruins where once there were houses. At least three fires had broken out within its boundaries. It was the result of 30 years of neglect. Luckily, the Rainbow Family, an international hippie movement born in the United States in the 1970s, took notice of the village. They wanted to start an ecological life project and that ‘lost land’ seemed perfect for it. That is how Matavenero came back to life. 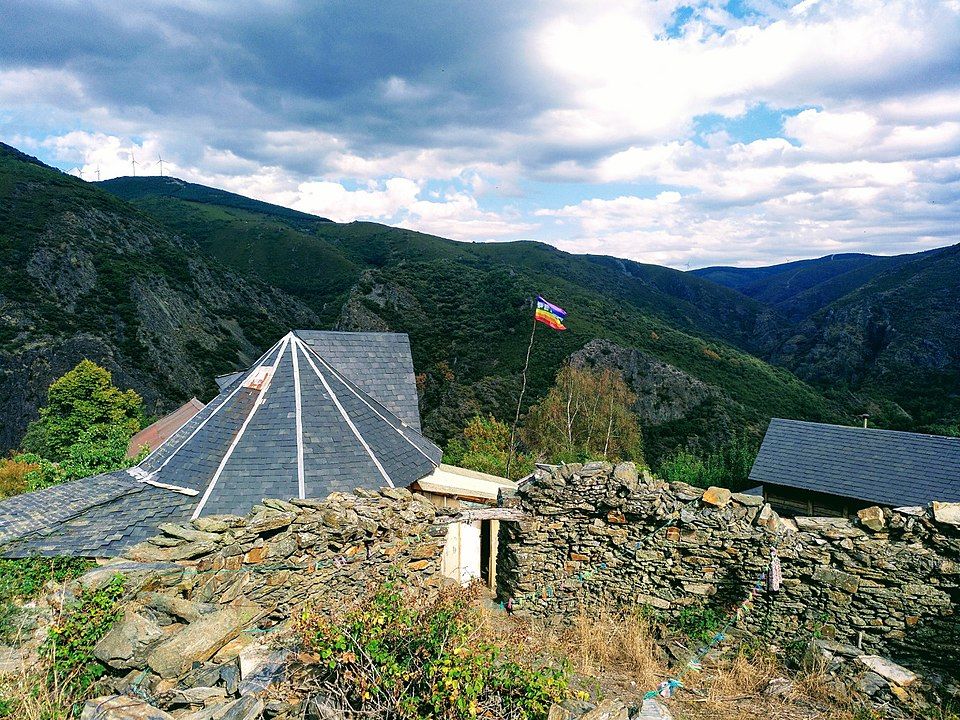 The village of Matavenero with the rainbow flag waving | Wikimedia

When Matavenero literally rose from the ashes, there were only four who dared to settle there: a Swiss woman, two German men and a boy from Barcelona. In those early years the tenants dedicated themselves to transforming the village into a habitable place and settled in tents. They were helped by many other people.

Over the years, the village grew to 140 adults and 40 children of different nationalities. The houses, previously destroyed, were reubilt and some buildings for common use were also built. Matavenero has a library, a school, a doctor’s house and a canteen. It also has a hostel and a camping area for those outsiders who want to visit this curious settlement. Although the most outstanding building, at least in terms of its appearance, is known as the Geodesic Dome, a building that is mainly used to teach workshops of the most diverse nature. 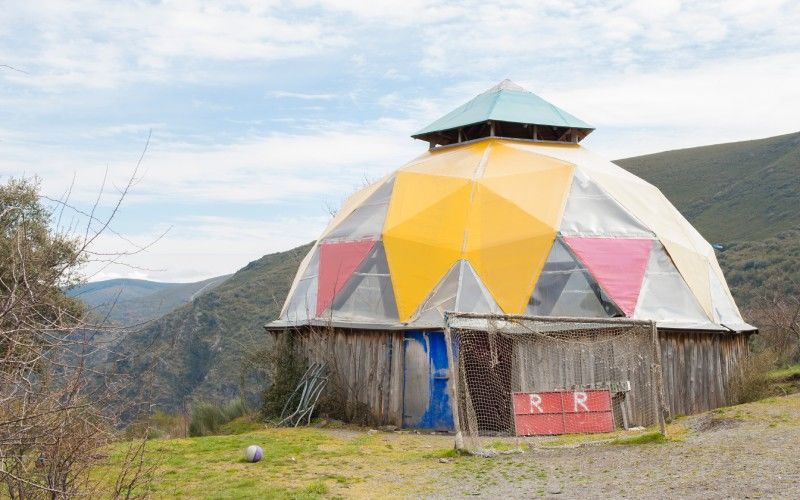 An alternative to ordinary life in Matavenero

The inhabitants of Matavenero, who come from Brazil, France, Denmark, Germany, Spain, Poland… are usually hard-working and educated people, with university studies or trades, who have had enough of urban and conventional life. This Leonese village offers them an escape, a new way of life. 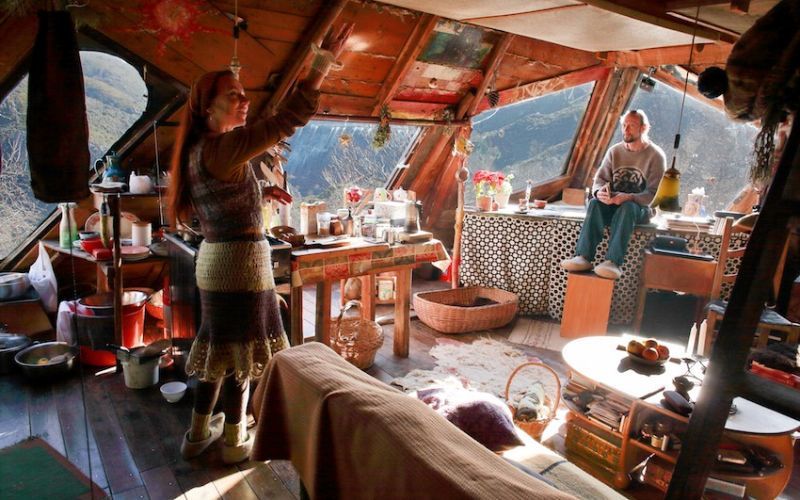 Two of the inhabitants of Matavenero in their house | Wikimedia

Likewise, the tenants of the village live without paying taxes, water or electricity. But, in return, they are the ones who are self-sufficient. They plant their gardens, raise their livestock and collect their wood, among other activities. They get their electricity from solar panels and electricity from the streams that flow down the mountain.

Today the hippie village has about 70 inhabitants and tops the list of villages with the highest birth rate in the province, with 16 youngsters running wild in its streets. In the documentary Matavenero: el pueblo arco iris (the rainbow village), directed by Pablo Alonso, one of the neighbours says that in the village children ‘wake up when they want, eat when they want and go to school when they want’. Life here happens like it does in the film Captain Fantastic.

But that doesn’t mean that the children don’t learn. Not at all. In Matavenero, children attend a school called Free School. In order to have a structure in which to teach the classes, the tenants of the village chose a house that, curiously, was the only one claimed by its previous owner. However, it seems that in view of the evidence of how their home had been before the intervention of the Rainbow Family, the owner allowed them to stay. 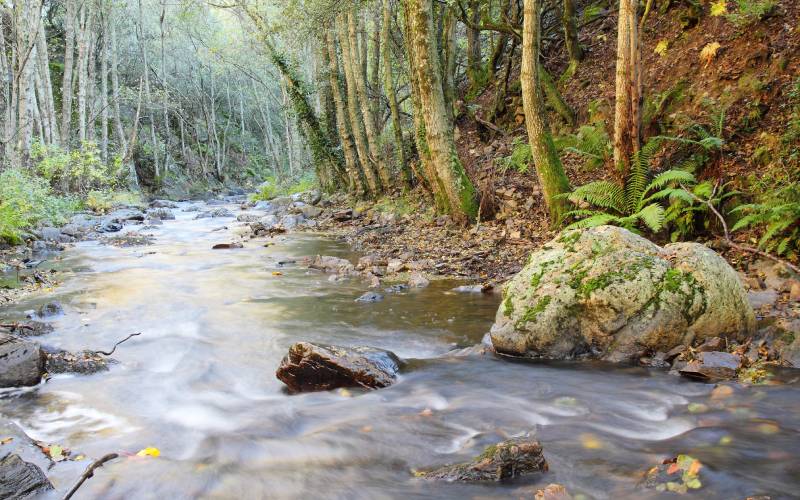 Once they finish school, the teenagers go on to join one of the institutes of the nearest villages, such as Bembibre or Astorga. There, what is most difficult is the process of adaptation to a society to which the kids have lived outside.

A village that can only be reached on foot

The hippie settlement is located in the municipality of Torre del Bierzo and cannot be reached by car. To reach its heights you have to leave your car in a nearby parking lot and walk. There are two options to reach Matavenero. The first is through a path that starts from the village of San Facundo. The second is from Foncebadón. In the first case, beauty awaits the visitor, and in the second, simplicity. 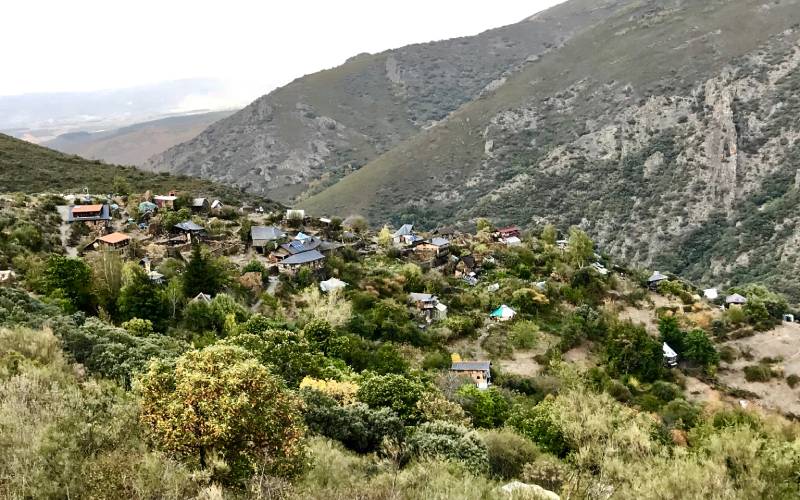 Matavenero’s hostel welcomes all visitors who are not going to spend more than 10 days in the village. The stay is free, but it is not frowned upon to provide some financial help. That is to say, ‘the will’ is requested. The inhabitants of the village are also used to visits, as this village is known internationally, although not so much in Spain.

Putting one’s feet on the ground

As the residents of Matavenero explain in Pablo Alonso’s audiovisual piece, coexistence among them became more complicated over the years. Lifestyles between Spaniards and Germans became to be noticed. Many people left and decided to reintegrate into society. New ones came.

‘The project didn’t fall apart, but it doesn’t have the same strength or enthusiasm,’ says one of the neighbours who has already left Matavenero. Meanwhile, one of its current tenants concludes: ‘I feel that we are, not with so much excitement of creating something totally different, we are more aware of the differences and we are on a more real ground’.

Castile and León, León, mountain villages, nature
It may interest you...