Considered the most beautiful village in Burgos, Orbaneja del Castillo surprises its visitors thanks to its natural environment. Located almost on the border with Cantabria, it stands out for its unique features. The village is known for its 25-meter high waterfall that emerges from the Cueva del Agua and crosses the village until it reaches the Ebro River.

A beautiful, steep, picturesque medieval framework and a waterfall that even touches the facades of the houses. One of the many charming places in Castile and León. A perfect destination to enjoy rural tourism and connect with nature. An incredible postcard in the Iberian Peninsula.

A history marked by different cultures 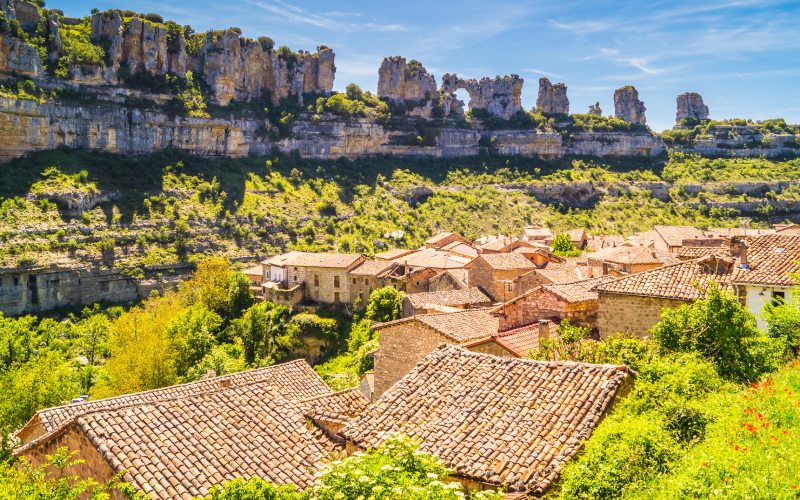 Orbaneja is located on the border of Burgos with Cantabria, embedded in a karst landscape. Located in the Sedano Valley of the Natural Park Hoces del Alto Ebro and Rudrón. Surrounded by caves where its history is born. The best known are the Cueva del Níspero from the Epipaleolithic and the Cueva del Azar, with remains of rock art.

In the Middle Ages, Muslims, Christians and Jews lived together in the town. During this period, the town had a privileged role, as its inhabitants were exempt from paying taxes. Through this ancient medieval village, a branch of the ancient Way to Santiago passed, which was protected by the Order of the Temple. The Templars built the hospital and monastery of San Albín to house the pilgrims.

Despite its name, it currently has no castle. The toponym could refer to the natural rocky walls surrounding the village, but in fact this surname is due to the ancient fortress of the 14th century. There are few remains of the castle and the wall, but deposits of an aljama have been found. It was a place of prayer for Muslims and Jews, a symbol of the cultures that coexisted in the village.

The Orbaneja del Castillo waterfall, its sign of identity 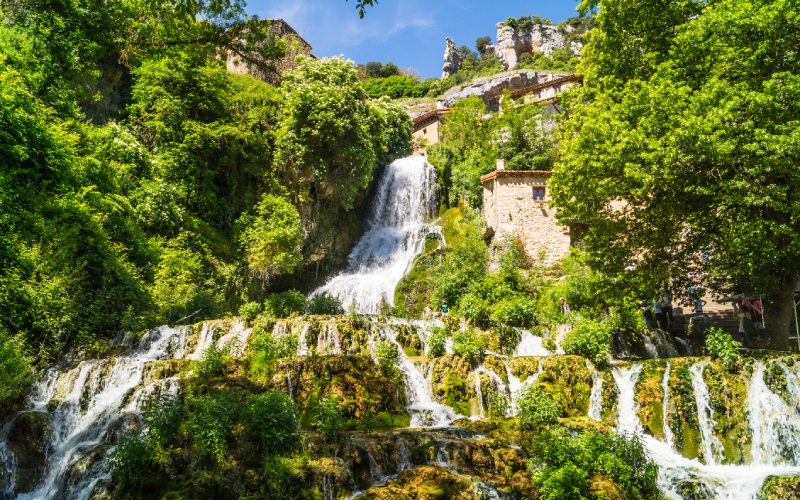 The hallmark of the village of Orbaneja del Castillo is its imposing waterfall. With more than 25 meters high, it divides the village in two halves until it reaches the Ebro River. The stream rises from La Cueva del Agua, located a short distance from the village. It is possible to visit it thanks to the hiking trails in the surrounding area.

The location of the village, surrounded by dense forests and its mountain landscape are an extra attraction of the place. In addition, the microclimate created by the water and the vegetation caused by the passage of water, make Orbaneja the perfect habitat for animals such as trout, grey heron and kingfisher. In addition, it produces stepped terraces and tuffs due to the carbonate saturation of the water from karst aquifers. The contrast of the turquoise water with the green color of the moss offers a very special painting.

The waterfall can be seen every day of the year, although it is advisable to visit it during the rainy season because it is full of water and is at its maximum splendor. In recent years, the town has become too crowded, especially in summer and on weekends. Therefore, the best time to enjoy this postcard is in the rainy months. The experience is unique. With only 53 inhabitants, walking through the village outside the holiday seasons is a pleasure. Only the roar of the waterfall breaks the calm of Orbaneja.

The natural environment of the Ebro River Canyon 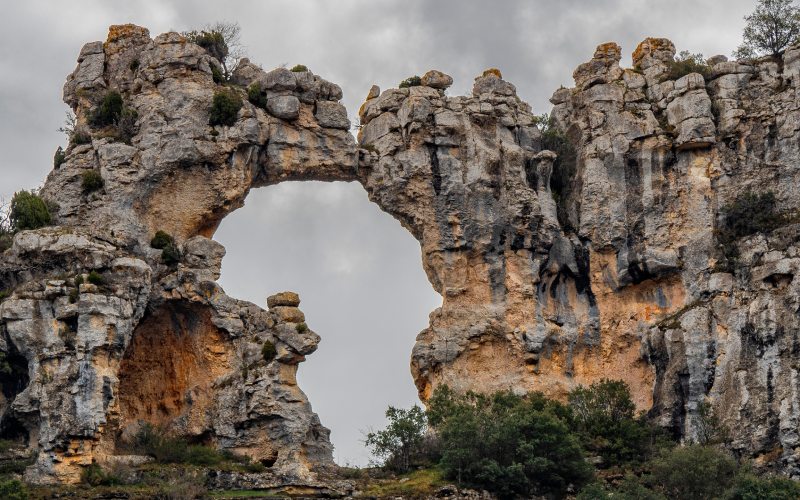 Orbaneja del Castillo is a photographable corner in itself, but the landscape makes it even better. In front of the village, on the wall opposite the Ebro River Canyon, it is possible to enjoy the whimsical shapes of the limestone rocks that surround it. The well-known Ventana Cerrada (Closed Window) and the mounds of Los Camellos stand out, this name is due to the fact that the shape simulates the silhouette of these mammals. For more whim of nature, they look like two camels kissing and forming in the middle the silhouette of the African continent.

In addition, in the sky it is possible to contemplate the vultures that inhabit the cavities of these rocks. The village is surrounded by holm oaks, walnut trees and large oaks. The surroundings of Orbaneja are a paradise for hiking enthusiasts thanks to its numerous routes.

What to see in Orbaneja del Castillo 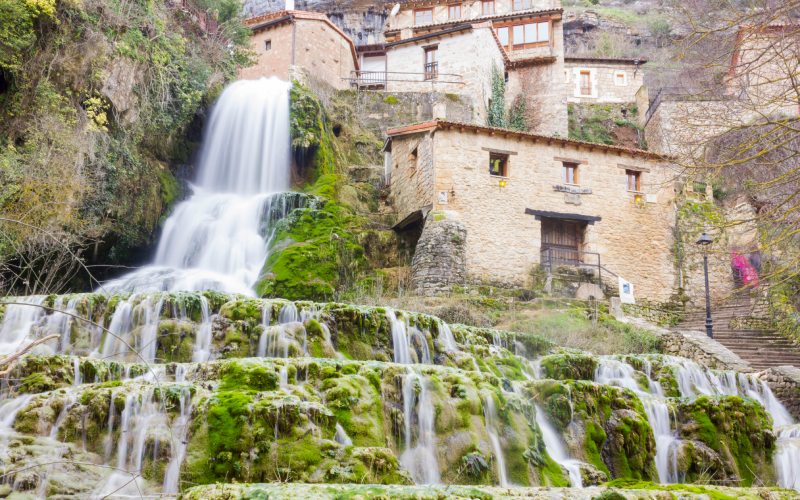 Located in the province of Burgos, the charming village of Orbaneja del Castillo has a lot to visit. It is true that its waterfall and the surroundings of the place have most of the limelight, but the village also hides spots of interest. First of all, it should be noted that only the inhabitants of Orbaneja can park their vehicles in the town center, but there are 3 parking lots for tourists to leave their cars.

The historic center of this ancient medieval village was declared a Historic Site in 1993, thus combining cultural and natural interest. The Plaza Mayor is the heart of the town, where the waterfall is born. Full of stone houses with facades with wooden balconies, located next to the stream, stores and several restaurants.

Time seems not to have passed in this place. Getting lost wandering through its streets and enjoying its typical mountain style houses, due to its proximity to Cantabria, with the karst landscape in the background is a real visual pleasure. Not to mention the pleasant sound of flowing water. During the walk it is possible to visit the 14th century Casa de los Canes or the Casa de los Pobres in the old 16th century hospital. Particularly noteworthy is the palace of the Marquises of Aguilar, called the Casa Fuerte and located on top of a large rock.

In addition, it is possible to visit the church of Santa Maria, originally with a marked Romanesque style, although now with several reforms. The village is also known for the visit to the five flour mills that used the force of the water of the waterfall for its movement. In the highest part of the village is the natural viewpoint of Orbaneja, the perfect place to get a different view of the canyon of the Ebro. No wonder it is known as the most beautiful village in Burgos.

Burgos, Castile and León, most beautiful villages, mountain villages, nature, waterfalls
It may interest you...