Immaculate Town - Museum of the Marquis of Santillana

It is said that this locality is a triple liar, since it is neither by the sea, nor flat, nor holy. Whether this is true or not, the village, which is very close to the Caves of Altamira, makes up an extraordinary Historic-Artistic Complex of beautiful medieval and Baroque mansions. In fact, it has been described by Jean Paul Sartre as the most beautiful village in Spain. Its old character is reinforced by the passage of the pilgrims of the Northern Way

In this medieval town, the quiet walk is an unforgettable experience. The main things to see in Santillana del Mar are the Collegiate Church of Santa Juliana, the Belardes Palace, the Casa de los Tagle and the nearby Altamira Caves. It is a town that can be visited in a day, depending on the degree of detail that the visitor is looking for. However, it is best to spend at least one weekend in it and its surroundings. To continue your trip, you can head east to Santander. Another is to look west and reach the remarkable Comillas and the nearby Oyambre Natural Park.

On the pages about sleeping and eating in Santillana del Mar you will find notable accommodation and restaurants. On the other hand, its location makes it ideal for several of the active tourism plans in the province of Cantabria.

Nearby to Santillana is the Cave of Altamira, in whose walls an extraordinary set of paintings of the Paleolithic Superior is located. These paintings show that Santillana del Mar is located in an area that has been populated for more than fifteen thousand years.

Many historians identify Santillana del Mar as the old Cantabrian town of Concana, while other historians place it in Liébana. What does seem certain is that a Roman road passed by this villa passed that linked the coastal ports of Portus Verasueca (San Vicente of the Barquera), Portus Blendium (Suances), Portus Victoriae (Santander) and Portus Amanum, and later, Flaviobriga (Castro Urdiales).

During the Muslim invasion the town was called Planes, and in it were deposited the relics of Santa Juliana, a Christian martyr of principles from the fourth century. To accommodate these relics in the ninth century IX an Abbey was built, which was directly loyal to the Asturian Crown. During the time it took to create this monastery, the name of Planes came to be forgotten, and was replaced by the name of this Saint, which would develop with the time into the name Santillana.

The Asturian monarchs and the Castilian counts continued protecting the monastery, until it transformed into the Collegiate Church. In addition, with the granting of a Charter by King Alfonso VIII of Castile, the village became a “de abadengo”, or a dependent of the same Abbot.

In the 15th century, the great poet and intrepid feudal Knight Don Iñigo López of Mendoza was named Marquis of Santillana by the Castilian monarch Juan II, receiving with this title jurisdiction of the village. His descendants, the Dukes of the Infantado, kept this privilege until the Suppression of the manors in 1837, despite the fact that since the end of the 16th century the nine valleys controlled by the Casa de Infantado were reversed by the crown to mean that the villa of Santillana del Mar was in its own municipality. 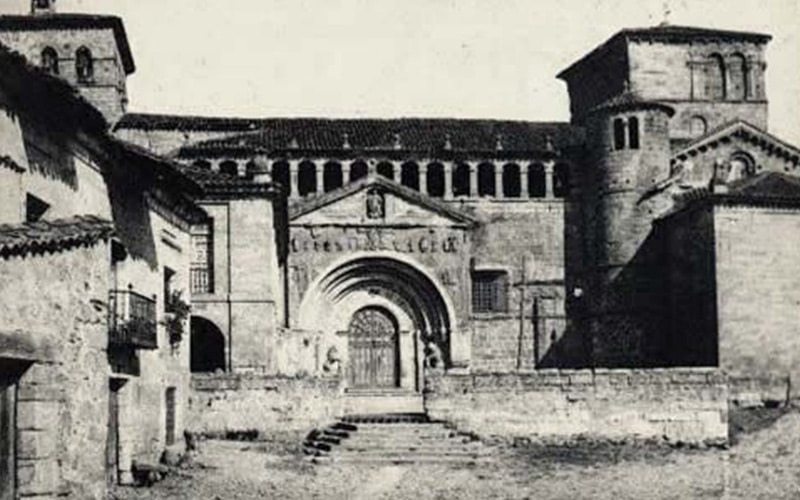 The decline of Santillana del Mar manifested in a shortage of important buildings for the last decades of the 16th and the 17th centuries. Santillana del Mar returned to splendor at the end of the 17th century, and more than ever during the 18th century with the return of the “Indians”—those emigrants who went to America and brought a capital with which they built magnificent mansions.

At the same time the writers Amos de Escalante and Benito Perez Galdos, as well as outstanding members of the bourgeoisie of Madrid, restored some of the houses and became vacationers in the town. This incipient tourism increased further with the discovery of the Caves of Altamira and the cave paintings in 1879. In the 20th century, the town was mentioned in Nausea (1938) a novel by the French philosopher and writer Jean Paul Sartre, who spoke of it as “a true relic in life of man”.

What to see in Santillana del Mar

The early appointment of Santillana del Mar as a Historic-Artistic Site in 1889, and the restorations undertaken by Count Güell (grandson of Antonio Lopez, the first Marquis of Comillas) in 1927 led to the streets of Santillana del Mar being preserved so well that they are virtually unchanged, maintaining their 16th century atmosphere.

The old town follows a linear scheme, in Y form, composed of Velasco Street which continues towards Santo Domingo, from where there are two streets: one that goes to the Collegiate Church and the other which leads to the main square, the market, or Ramón Pelayo, where the weekly Saturday market is held.

We start our tour in the Collegiate Church of Santa Juliana, a Romanesque design of the 12th century with later additions, which has been declared a national monument. The temple, of basilical design and with three naves, is crowned by semicircular apses, and follows the Romanesque model of the Way To Santiago.

The primitive Romanesque façade, at the foot of the temple, shows a series of reliefs preserved in the interior of the Church (Pantocrator, Saint Juliana…)  due to the construction of the Bell Tower to the West in the 13th century, a gate was replaced on the South side.

In the middle of the 15th century the remains of Santa Juliana were moved to the front and in the first half of the 16th century the altarpiece of the altar greater was built. An important gold treasure is kept in the sacristy. The magnificent cloister (13th century), the only one of Romanesque style in Cantabria that is still intact, is esteemed by the great decorative variety and wealth of the capitals. Some of these capitals have representations of scenes from the Old and New Testament and others relating to the life of the time, as “The Welcome of the Lady to the Knight”.

The Museum of Jesús Otero is located in the Plaza de la Colegiata, which is a permanent exhibition on the sculptor from Santillana del Mar. Opposite from it you can find the Casa de la Archiduquesa de Austria, or Casa de los Abades (17th century), whose beautiful patio has been converted into an antiques shop. In the nearby Plaza de las Arenas is the Palace of Los Velarde (between the 15th and 17th centuries), a building from the Gothic to Renaissance transition.

Although there are many mansions that deserve mention, we’re pointing out some key examples in Santillana del Mar. Next to the uniquely conserved trough for cows, you can find the Casa de Cossio and the Casa Quevedo, both from end of the 17th century. In the latter it is traditional to drink a glass of milk and cake with the people of town.

Following the calle del Río (previously Rúa del Rey) you will find the Casa de los Villa, of Baroque style, also known as “Casa de los Hombrones” due to the imposing warriors that stand guard on the shield, in which states: “a good death is a work of life.” Another significant building is the Casa de Leonor de la Vega (between the 15th and the 17th centuries), according to the tradition, it housed the mother of the first Marquis of Santillana.

The concentration of the civil architecture can be found in the main square. The Torre de Don Borja, attached to other buildings and property of the Santillana Foundation is managed by the municipality of Santillana as the scene of festivals and cultural events.

The Torre del Merino, from the 14th century, was the residence of the merino (the house and symbol of Lordly power that eventually imposed the ecclesiastical power, the Abbot, and an was later appointed by the Duke of the Infantado). Built with stonework from blocks in the bow point of access, retains all its defensive elements: arrow slits, machicolations and embrasures battlements. On the other side of the square is the Casa del Águila (17th century) and the Casa de la Parra (16th century), converted together into the cultural center. In front of them is the Palace of Los Barreda, now Parador Nacional Gil Blas. 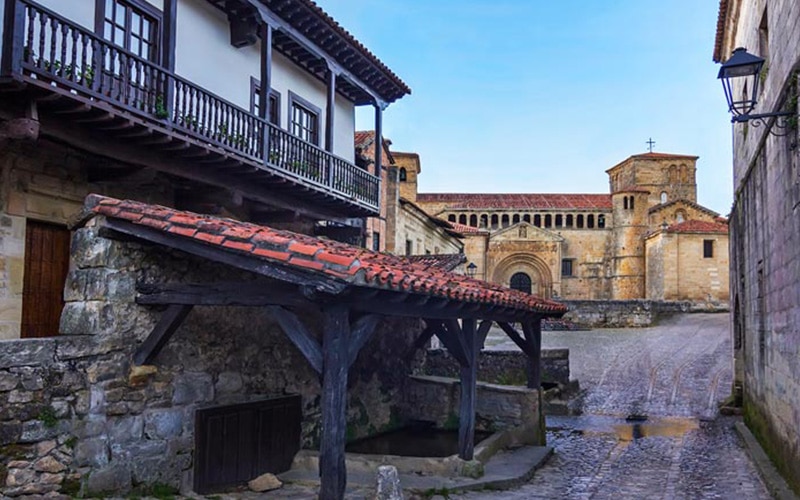 Street that leads to the Collegiate Church of Santa Juliana

More modern are the many large houses that the Indians built on their return from the Americas and which make up the baroque Santillana. They are characterized by a main façade in ashlar stone, with a large opening for access. Sometimes preceded by a portico with a semicircular arch. In any case, they are usually adorned with wrought iron balconies and a large family baroque coat of arms. Also characteristic of this century are the pulpit balconies and the oculi on the facades.

Across the road from the village is the Diocesan Museum. It is located in the Convent Regina Coeli of the Poor Clare Order and is inhabited by nuns. On the outskirts of the town, in the Convent of San Ildefonso, founded in 1667, there is a sixteenth-century ivory crucifix. Around the convent you can buy typical artisan sweets, made by the Dominican nuns themselves. Without a doubt, a place to see in Santillana del Mar, one of the most beautiful villages in Cantabria.

Next to the Campo de Revolgo, scene of medieval fights, is the Casa de los Tagle. It is a highly recommended visit, as it preserves the furniture and belongings of the period, as well as an important archive. Be that as it may, the whole of the town enjoys great charm. Although many elements point to tourism, what you see in Santillana del Mar still maintains a soul that transports the visitor to another era. A sensation that is reinforced for those who arrive at the place doing the Northern Way to Santiago.

cantabria, churches, most beautiful villages, museums, palaces
It may interest you...