The Liébana Valley, in Cantabria, hides real treasures in the form of villages. Mogrovejo is one of them. This small town in the municipality of Camaleño, just ten kilometers from Potes, is an obligatory stop if you visit the area. It holds the qualification of Asset of Cultural Interest and was named “Town of Cantabria 2017” and since 2020 “Most Beautiful Town of Spain”. 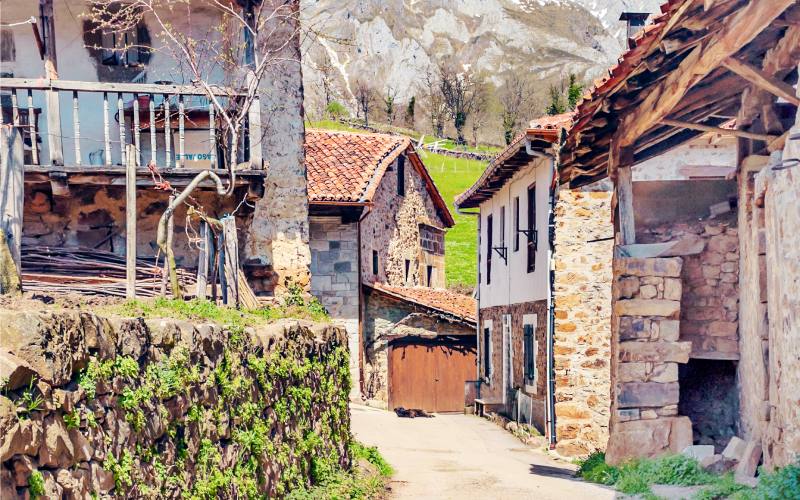 Popular architecture of the town | Shutterstock

The natural environment and popular architecture that surround Mogrovejo has made it become the perfect setting to emulate the Swiss Alps in a movie about Heidi. But the charms of this village do not end there, its old town with a stately tower of the thirteenth century and the church of Nuestra Señora de la Asunción are more than worthy of mention. So it is not surprising that one of the most important Jacobean routes passes through it.

History of the village

Almost no information is known about the origin of the town or its first settlers. The only thing that is known is that it was previously called Luarca, taking its present name in the 13th century. Precisely in this century the construction of the tower of Mogrovejo was carried out by the lords of this mountain village. To this lineage belonged the bishop of Lima, Toribio Alfonso de Mogrovejo, canonized by the Catholic Church. 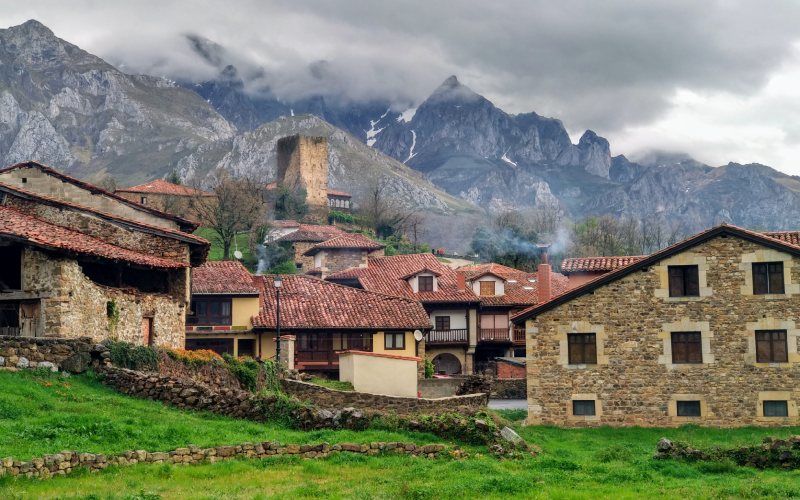 The story goes that the lord of these lands was the standard bearer of Don Pelayo’s army in the battle of Covadonga. The flagpole was preserved for a long time in the now disappeared hermitage of San Martín. The lords of Mogrovejo also received the royal privilege of naming the mayors of the municipality of Camaleño, then known as Valle de Baró.

The tower of Mogrovejo was built at the end of the 13th century by the lords of Mogrovejo, distinguished in 1248 by King Sancho with the concession of the monastery of San Martín de Mogrovejo. At the end of the 14th century, this lineage became related to the León family Álvarez de Miranda, who are the current owners of the monument. It is protected by the royal decree of April 22, 1949 and was declared a historic site in 1985. 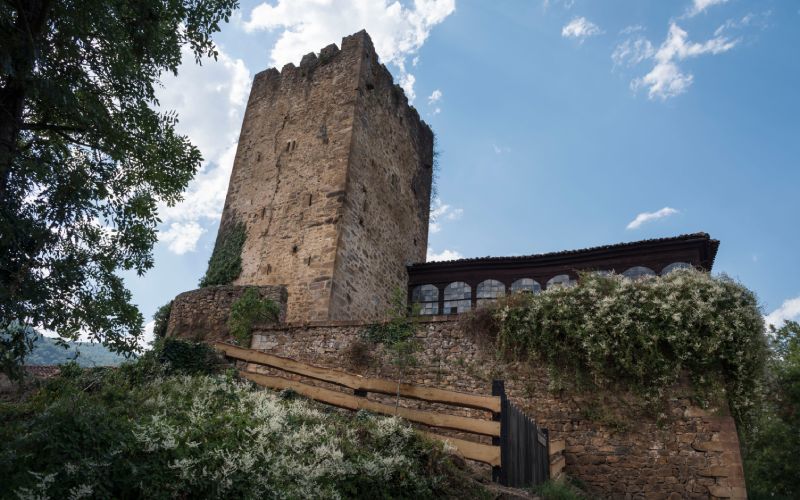 The tower is crenellated and is 21 meters high. | Shutterstock

The construction is on a farm surrounded by a high perimeter wall. It has a square floor plan, is crenellated and is 21 meters high. It has a series of twin windows, of which the original shutters are still preserved. Today, the tower is empty, without floor divisions, and is undergoing a restoration process. The wall also contains several buildings in ruins, including the mansion built at the same time, as well as the chapel built between the 17th and 18th centuries.

The church and popular architecture

The church of Nuestra Señora de la Asunción is located in the epicenter of the old town. It is a 17th century building with a single rectangular nave. In its interior the main altarpiece of baroque style stands out, with the coats of arms of the Mogrovejo family. It also keeps an image of Santo Toribio and another Flemish image of the Virgin of the XV century, known as La Milagrosa. The interior of this temple can only be accessed during mass hours. 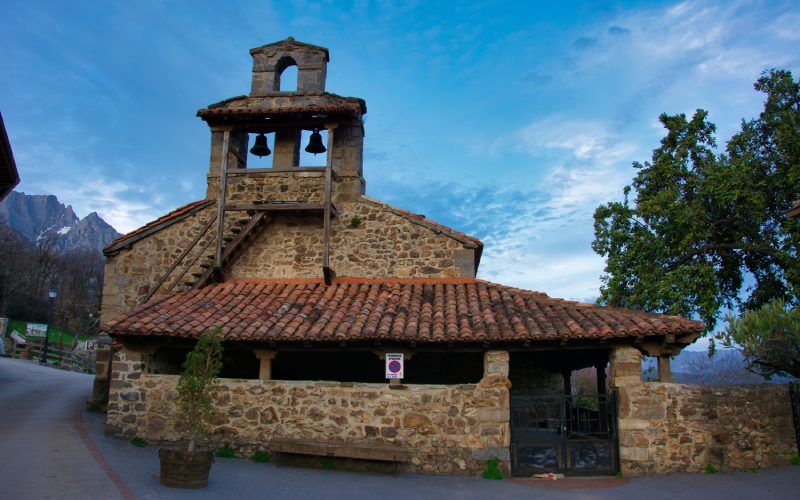 The church keeps a Flemish image of La Milagrosa. | Shutterstock

Another of the great attractions of the town are the traditional houses of the Liébana region. For its part, the upper floor remains open to the outside. You can also see other baroque style mansions dating from the 16th to 18th centuries, many of which retain the stately coats of arms on their covers. The mansion of Vicente de Celis stands out, with a monumental Estrada coat of arms.

The historic center is one of the main attractions of this town, but it is not the only one. Many of the visitors who come annually to Mogrovejo are pilgrims who follow the Vadiniense Way. This Jacobean route that links the Northern Way with the French Way. 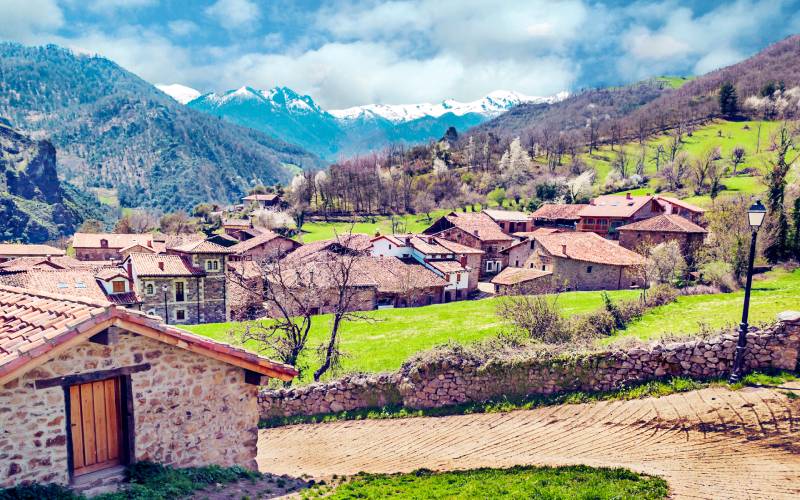 Many routes leave from this place| Shutterstock

Its natural environment causes great interest among hikers and therefore, from the town begin several hiking trails that allow to know closely the flora and fauna of the area, both the valley and the high Cantabrian mountains. For example, the route of Bajo los Picos is a circular route of about four hours. For its part, the route to Peña Oviedo consists of a trail of about 7 kilometers that can be extended up to 14.5 if you reach El Cable. 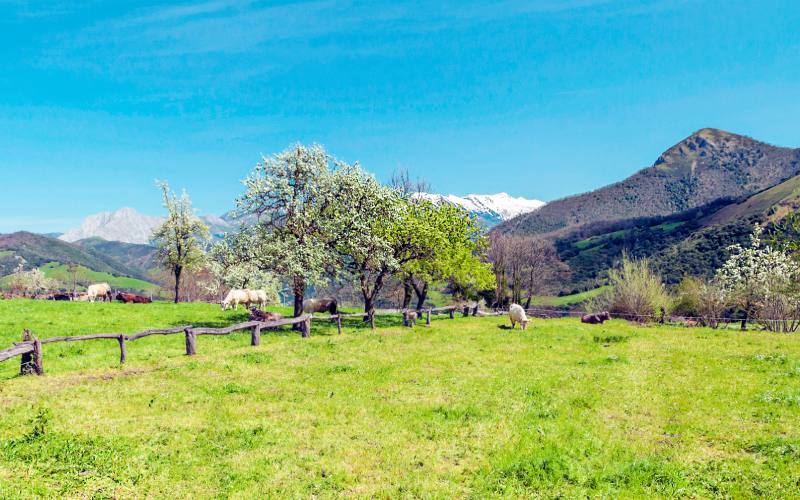 It was chosen as the setting for filming the movie Heidi, queen of the mountain. | Shutterstock

Mogrovejo has recently made it to the big screen. In 2016 it was chosen as the setting for filming the movie Heidi: the queen of the mountain. This is the first part of a trilogy that follows the adventures of Heidi and her friends. Specifically, Mogrovejo was the location selected to place Pedro’s house. For a few weeks, the whole environment was turned into a small village in the Swiss Alps. The grandfather’s hut was built in Cillorigo de Liébana, specifically in the village of Pendes and the surroundings of the Hermida Gorge.