The location of Fuente Dé makes it one of the most isolated mountain villages in the Picos de Europa. Hidden in the surroundings of Liébana, it is in the middle of a glacial circus that leaves it surrounded by high peaks. However, it is very visited thanks to one of the most interesting attractions of the mountain range in Cantabria. This is El Cable, the cable car of Fuente Dé. In one run it saves more than 750 metres of unevenness and brings anyone who goes to a viewpoint of great beauty closer. An experience to overcome the vertigo at the height of the Caminito del Rey or Montfalcó. 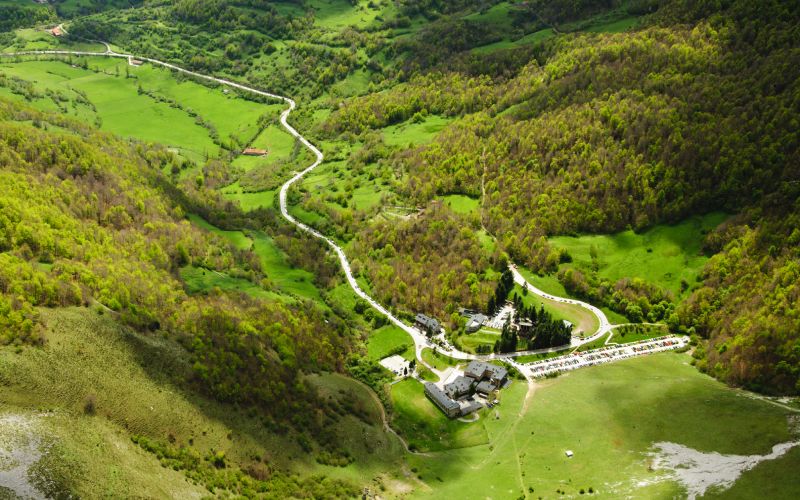 When the idea of building a cable car in the area was considered during the early 1960s, it seemed anything but appropriate. The area around Fuente Dé had traditionally been a place of both mining and livestock. José Antonio Odriozola, a Cantabrian engineer who was very attached to the area, was the one who suggested the creation of El Cable. With this he wanted to give alternatives to a territory that could fall into depopulation. To do so, he was inspired by a route used to bring down mining assets that already existed.

It took from 1961 to 1964 for it to materialize and another two years for it to be approved. During the whole process there were many technical problems that were solved. The neighbours were not sure what the Fuente Dé cable car was for or if it would be of any use. José Calavera Ruiz and Ángel Hernández Morales were the ones who tackled the difficult challenge. The alternative chosen was a two-way cable. That is, between the stations there would be two parallel lines with a cabin each that could move in both directions. 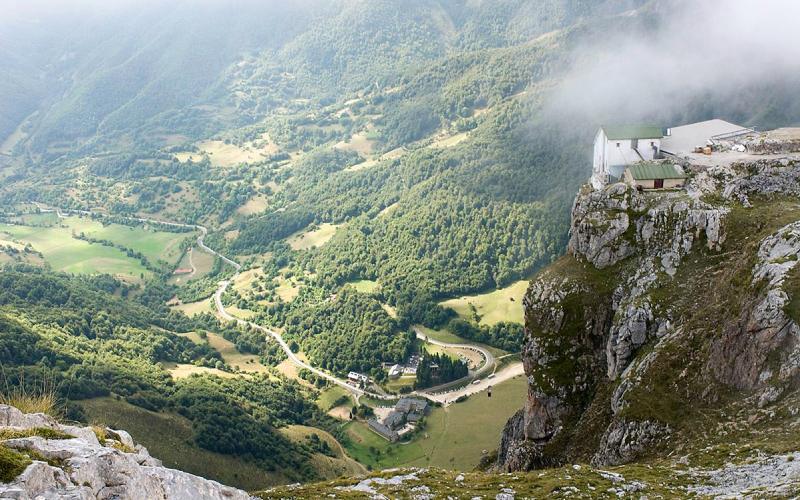 Up there, the problems came from the isolation. With Espinama as a reference point, practical solutions had to be found to make the whole thing safe. Reinforced concrete and complicated excavations in the glacial terrain were carried out. At the same time, a priority was that the whole thing should not disrupt the landscape. Creating a hulk that would glow in the middle of the Picos de Europa was dismissed from the outset.

It was in 1966 when the works were successfully completed, both the cable car and the cafeteria buildings as well as the Parador that was built in Fuente Dé itself. The event was worthy of the limelight and on September 12th the dictator Francisco Franco came in person to open the cable car. With the hype that surrounded any action around such a character, a great media impact was achieved. It soon became clear that the humble cabins that were thought to be empty at first were going to become the opposite.

The ascent to El Cable Viewpoint

The cable car has been renovated several times and achieved its goal of making the area more dynamic. In summer, 2,500 people take it and the authorities estimate that the number of visitors to the site could reach 5,000. However, it is technically impossible. In total, 753 metres are saved in a 1,450-metre route. The journey takes less than four minutes and leaves behind some of the best possible views of Liébana. Each cage holds 20 passengers and at peak times it is advisable to reserve seats as they are quickly sold out.

Its impressive figures make the Fuente Dé cable car one of the biggest in Europe with just one shot. The viewpoint of El Cable is waiting at the top. With nothing to envy of Pyrenean corners, the glacial character of the valley is clear. The very stone walls saved by El Cable show the effects of the great ice masses that shaped the place. 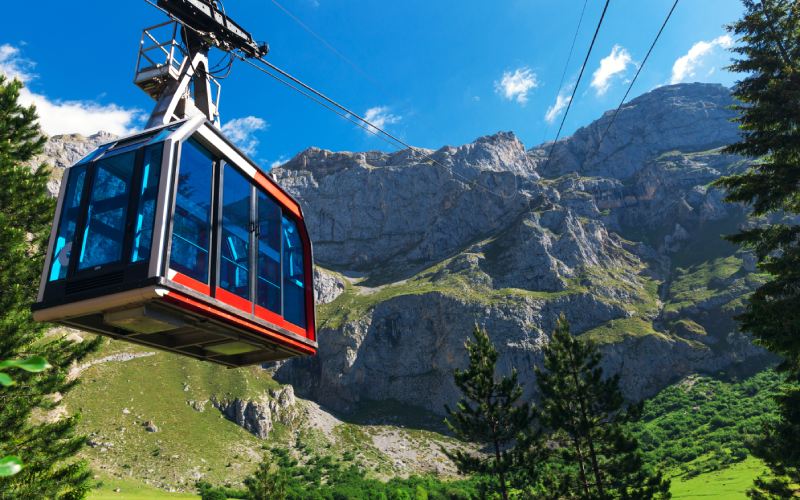 You can also see the source of the Deva, a river that starts at the humble Fuente Dé. This important waterway supplies Potes and the monastery of Santo Toribio de Liébana. Once in Asturias, it takes in the flow of the Cares, famous for the route to which it gives its name. After that, it continues to trace the Asturian-Cantabrian border as far as Unquera and Colombres, where the Northern Way and the A-8 pass through. It is precisely from there that it is usual to access El Cable, crossing the impressive Hermida Gorge on the way.

The route between the cable car stations in Fuente Dé

Although taking El Cable is almost mandatory, choosing to go down on foot is an experience. A hiking route of just over 14 kilometers that takes full advantage of this spot in the Picos de Europa. From the 1,823 metres of the upper station you will follow a path that is mostly downhill. It is only a matter of gaining metres at the beginning and end, but the difficulty is simple. It is also quite popular and well indicated. The distance it saves puts the duration of the walk at about four or five hours. 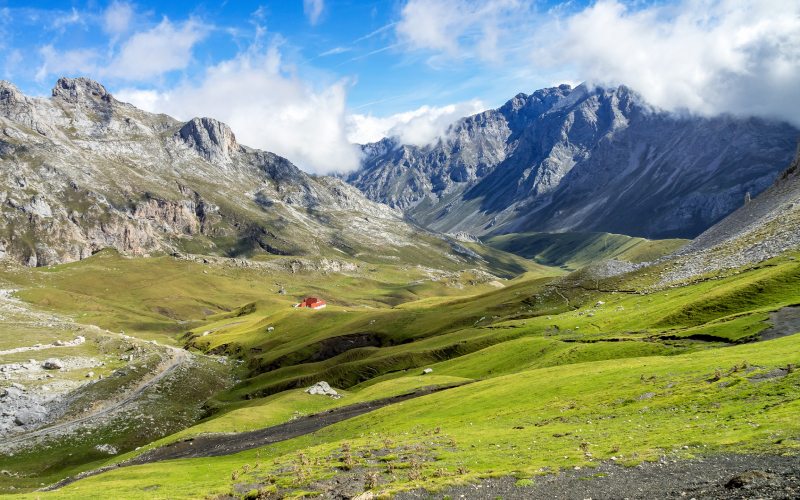 Chalet Real near the cable car of Fuente Dé. | Shutterstock

The start is defined by a small ascent and a crossing between mountains that appear in a gray nude. Peña Olvidada or Torres de los Horcados Rojos are some of the peaks that make up this particular and beautiful landscape. This is how you get to the first big stop, the Chalet Real. Built to house a king, Alfonso XIII, as its name indicates, it overlooks an open and imposing site. Of English style, it was financed by the Royal Asturian Mining Company. 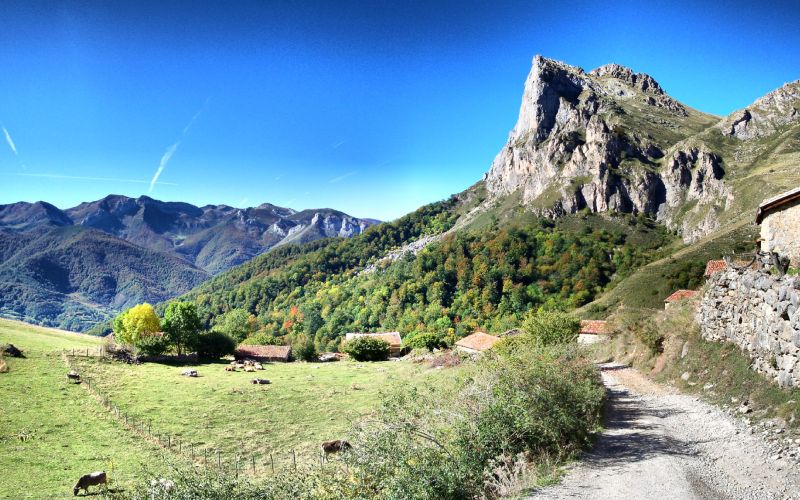 As you go down to Espinama you pass by the mountain refuge of Áliva; near the hermitage of the Virgen de las Nieves and a complex called Invernales de Igüedri. These are a direct reflection of the area’s livestock past, as they were shelters for the local shepherds. Going down allows you to go from the living rock to the woods. Beeches and oaks, among others, give a change of third in which the populations make an act of presence. Espinama or Pido go up the course of the Deva to the same Fuente Dé.