La Caldera de Taburiente, on the Canary Island of La Palma, has become famous for various reasons. This huge crater has earned the right to be one of the country’s fifteen National Parks. The result of volcanic activity and erosion, its conditions have made it an exceptional telescope centre. However, if it stands out for anything, it is the large amount of water it boasts. A dam built in the middle of the 20th century to help make use of the water resources is one of its most popular attractions. It is the Los Colores Waterfall. 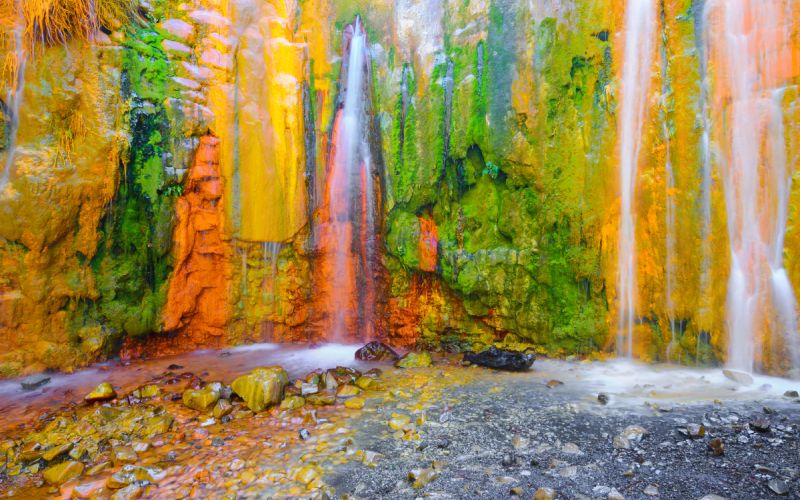 The more water, the more colours the waterfall has. | Shutterstock

A casual but very colourful combination

Within the Caldera de Taburiente, this colourful waterfall is located in the Protected Landscape of Barranco de las Angustias. This breach is the natural outlet for the huge volcanic pot. Studies in the park have shown that the interior was once a gigantic lake. In fact, the opening of this enormous body of water would have shaped the aforementioned ravine as it is seen today. This rupture led to the creation of a channel centred on Las Angustias, which ends up in Tazacorte. 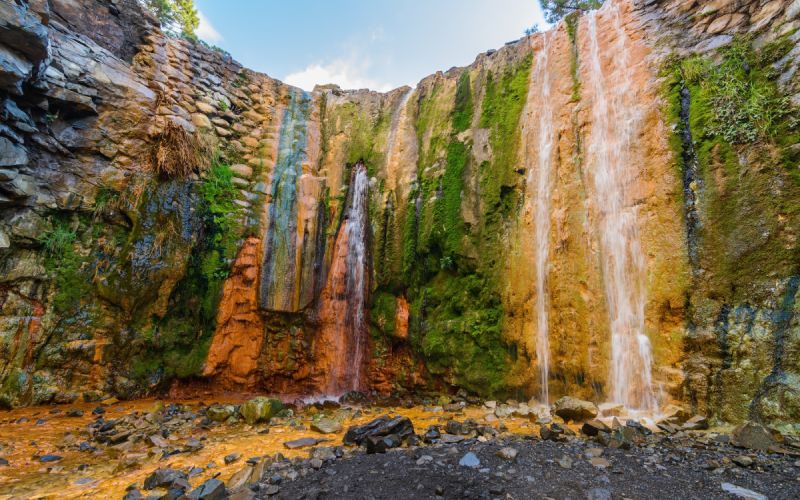 Despite the fact that it has water, the area stands out for its steep, and sometimes arid, walls. A land that may seem inhospitable but is nevertheless easily accessible. Going up the Barranco de las Angustias you can reach, after the landmark called Dos Aguas, the Los Colores Waterfall.

The waterfall flows from the top of an artificial wall, set in a narrow part of the ravine. In this way the liquid could be accumulated. It was in the 1960s when the work was carried out. Since then, ferrous sediments have been accumulating on the walls. These can be seen on the path that leads to the waterfall, as the colour of the water can be an intense orange, depending on how loaded the path is. Something that reminds us of Huelva‘s Rio Tinto.

Along with these ochre tones, the greens and blacks stand out. The former are the responsibility of algae and mosses. The humidity of the environment is perfect for these vegetable beings to prosper where the water splashes. Meanwhile, the dark tones come from the typical volcanic rocks of the place. The intensity of the colouring depends on the time of year. While in the drier stages the effect is lower, as there is less flow, in the rainy phases it shows all its splendour. 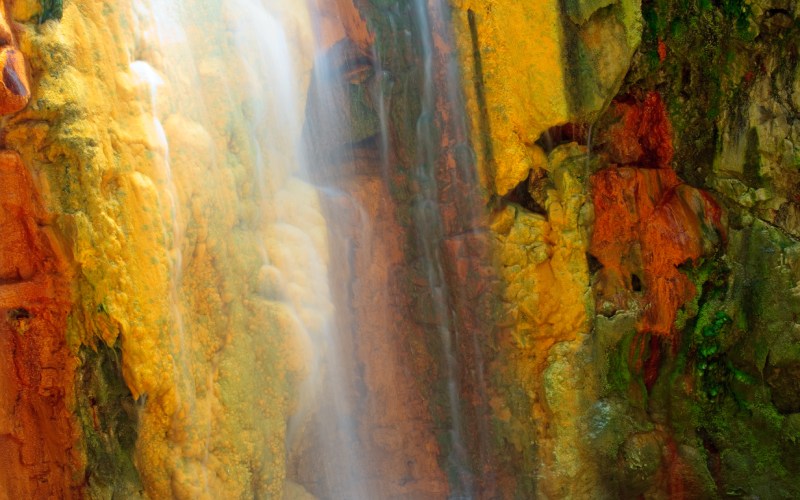 Routes to the Los Colores Waterfall

Access to this La Palma landmark is conditioned by the fact that you cannot go to the Caldera de Taburiente National Park by car. Therefore, the approach, wherever it is, must be on foot. There are two basic ways of visiting the Cascada de los Colores, both associated with the Barranco de las Angustias, where it is located. Both have the La Viña car park, near Los Llanos, as their head. 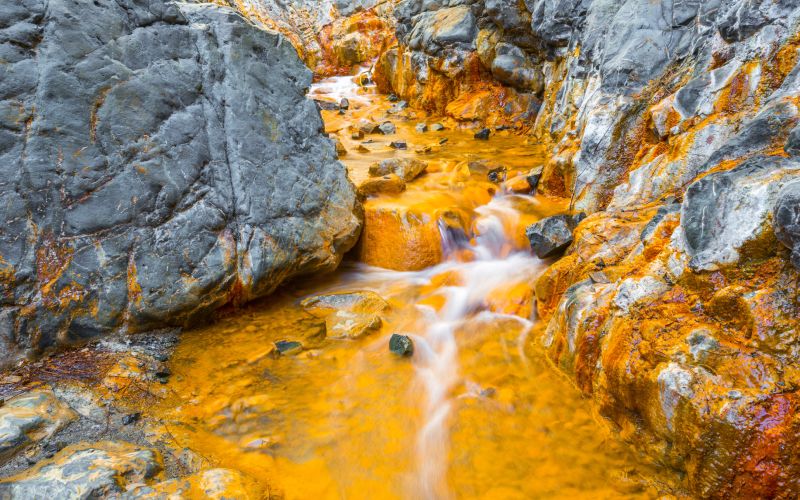 The orange of the waters gives the ochre to Los Colores Waterfall. | Shutterstock

Round trip route through the Barranco de las Angustias

If you choose this option, you will be left with around 13 kilometres to go along the Barranco de las Angustias riverbed. The exit is direct from the car park, so it is cheaper than the alternative; which involves more distance and taking a taxi. As a precaution, it is advisable to wear waterproof shoes to cross the stream, which has to carry a lot of water and that after heavy rains the course is quite heavy and even unsafe.

Throughout the first six kilometres you can see a typically steep environment that gains in beauty as the amount of water increases. Somewhat winding, milestones such as Dos Aguas stand out. This is where the Barranco de las Angustias is considered to start, although it extends a little further. The name of this point comes from the fact that it is the junction of the Taburiente and Almendro Amargo Rivers. 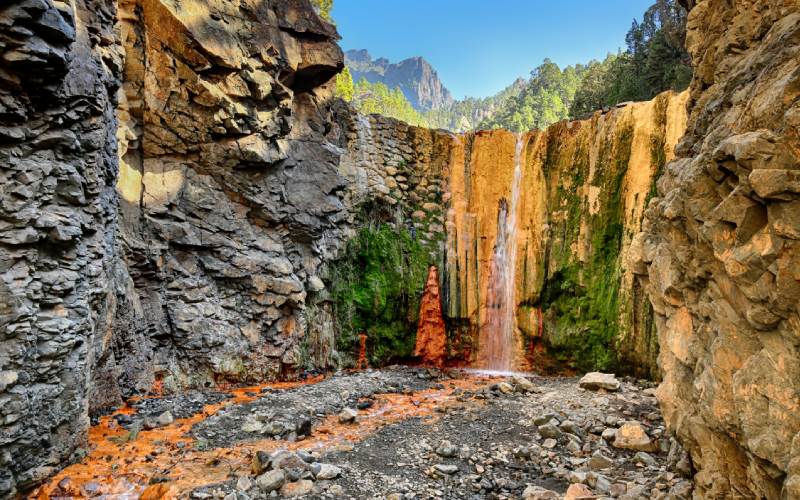 From Dos Aguas, follow the riverbed to the right until you reach the Cascada de los Colores. The last hurdle along the route involves going over a ledge until the waterfall, which requires some agility. The alternative is to get into the river course and get a little wet but without risking falling. In any case, after enjoying the jump, you would only have to take the same route but back. 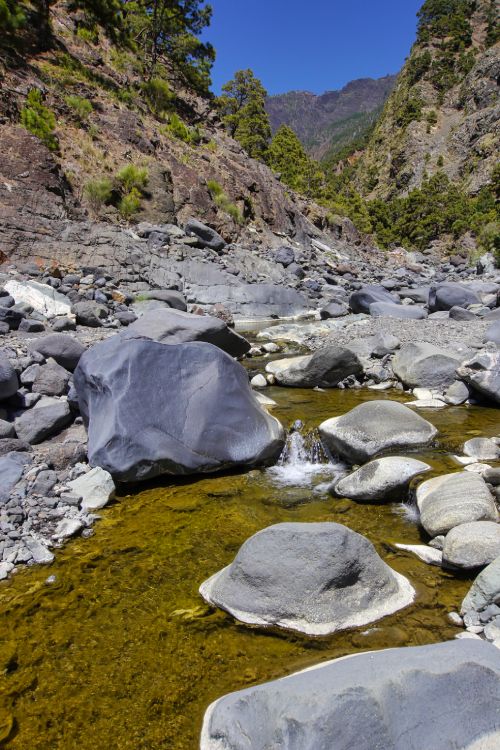 Over 14 kilometres you have the other basic option to reach the Cascada de los Colores. The precautions would be the same as before, only taking into account that a descent path is mostly made. To get to the Los Brecitos viewpoint, the best option is to take a shared taxi. Filling four seats the price is a little more than 12 euros.

Once at the top, after admiring the landscape, it is time to descend along a path that is as well signposted as it is beautiful. With native pines everywhere, you end up arriving at the busy beach of Taburiente. A perfect landmark to rest and refresh your body. A steep descent, known as El Reventón, later ends with signs leading first to the Barranco de las Angustias and then the detour to Los Colores Waterfall. Through the first one you return to the Las Viñas car park. 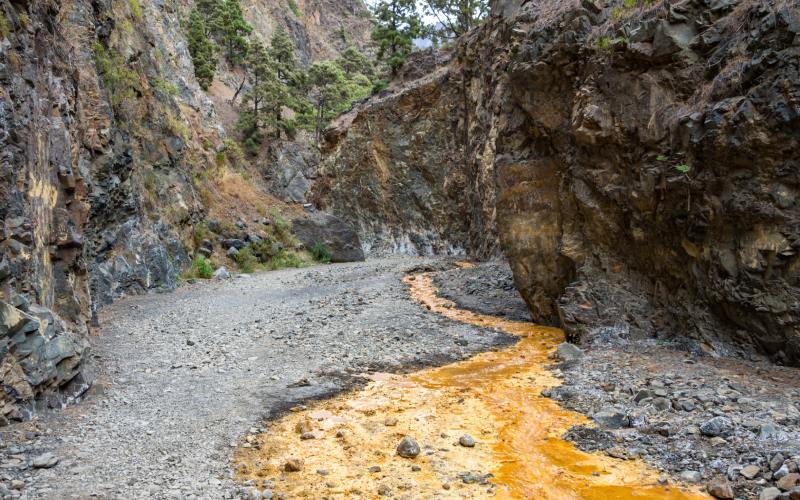 If you want a little more adventure, it is possible to do routes of about 20 kilometres long. For example, walking up to Los Brecitos. It is also possible to start from the ravine and instead of turning around, make the hard climb to the viewpoint and finish by walking down again to the car park. Both alternatives are only recommended if you have walking experience and an acceptable physical condition.

The most uninhabited places in Spain
Rural depopulation is a long-term problem that has come to light effectively not long ago. Más información