Origen of Guipúzcoa, of geniuses and txakolí

This fishing town was founded by the Romans to hunt whales, and has been on the sea for centuries before it joined with San Antón island. Getaria is well known for its wars and soldiers, the gastronomy, fashion, and the production of txakoli. The Balenciaga Museum is also a must-see in this city.

Plan your visit to Getaria

There is so much to do in Getaria. About 25km west of San Sebastián, Getaria is a charming fishing village where you can enjoy freshly caught fish right at the port accompanied by a local white wine, txakoli. It is situated between two scenic beaches and also has a little islet where you can go on a beautiful hike. It is the birth town of the famous fashion designer Balenciaga and you can visit the museum devoted to him.

Getaria is one of the oldest towns in the province, as it was founded between 1180 and 1194 by King Sancho VI of Navarre. During the second half of the 12th century, increasing and dominating the Cantabrian ports was a priority for the kings of Navarre. Gipuzkoa was conquered around the year 1200. The “Diccionario Geográfico-Histórico de España (1845-1850)” states that the town’s municipal archives hold a letter dated January 20, 1201 sent by King Alfonso VIII from Burgos, where it was declared that the inhabitants of Getaria had the right to pasture, water, meadows and forests. Because of archives dating from this time, it is clear to us that Getaria was founded by the kings of Navarre.

In the summer of 1638, during the Thirty Years’ War, Cardinal Richelieu planned a campaign that would annex the strategic territory of Gipuzkoa. The chosen port for this strategic plan was the one from our town, Getaria. In a barbaric attack launched from Getaria, the Spanish fleet commanded by Admiral Lope de Hoces was attacked, this attack was launched precisely from Getaria. Years later, the village would be attacked again by the artillery of the French galleons.

What to see in Getaria

Getaria has been a fishermen village for two millennia; gaining fame over the recent decades for its wineries and txakolí con DO. Take a morning to walk through its old, urban framework, formed by medieval and fishermen houses. A full day can be spent passing through the Balenciaga Museum, the church, and San Antón island. It also has two beaches, one for surfers and another for relaxing. You can also make excursions to nearby towns like Zarauz and Zumaia, with its unique Flysch park. There is also a diving school and plenty of opportunities for active tourism.

Getaria is located in a small bay surrounded by cliffs and is joined to Mount San Antón through a dam built in the 15th century. The entire structure formed by Mount San Antón and the isthmus is popularly known as the “Mouse of Getaria” because of its similarity to the animal. The silhouette of a mouse is visible from the coast, especially from Zarautz, and even from the Paseo Nuevo in San Sebastián if the weather is clear.

The name Getaria, which could derive from the latin cetaria (derived from cetus or fish) indicates that the town must have been founded as a small fishing village as it also already had facilities for canning fish.

Getaria’s history began in 1209, when the Castilian King Alfonso VIII promoted it with San Sebastián in order to attract people and popularise the port. To promote the construction of buildings and houses, he received the privilege to cut down trees in 1270 and, 20 years later, he exempted Getarian merchants from paying tolls in the Castilian kingdom.

On June 6, 1397, a board of different representatives gathered by the Corregidor (local governor) Gonzalo Moro to constitute the province. They were corrected and expanded in subsequent meetings, continuing until 1876.

In 1476, the famous Juan Sebastián of Elcano was born in Getaria. He was a military sailor who captained the ship Victoria, with which he completed the first journey around the world in 1522. This day is celebrated by the city during the Fiesta del Desembarco (Landing Festival).

During the 16th century, the town continued filling the dam linking San Antón island to Mount Gárate and constructed the walled town, which lead to the formation of a very large northwest fishing and commercial port that was effectively sheltered from destructive winds. Here, Getarian sailors excelled in the lucrative whaling industry-which is listed as a a symbol in the coat of arms- and was actively practiced for centuries, competing with with other cities along the Basque coast. The last whale was brought to port in 1878.

Another tradition in Getaria that dates back to the 16th century is the production of a bitter, white wine known as txakoli. It was consumed locally and undervalued in the late 20th century, when milder flavours became more popular and the crops became exhausted. It is still, however, considered a local specialty.

In 1597, a fire destroyed two-thirds of the town (150 wood houses). Year later, in July of 1638, during the Thirty Years War, a French fleet destroyed Castilian boats in the Getaria port and continued their siege with a terrible bombardment. 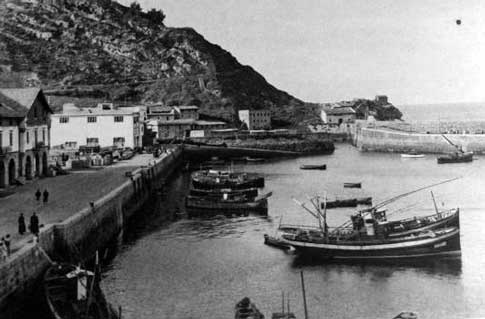 In 1811, the French occupied Getaria and kept troops stationed until 1813, consequently killing a great deal of the population. During the first Carlist War, the liberal army troops were bombed by the Carlists, again practicality destroying the entire population. This left the San Salvador church very deteriorated along with 16 houses.

On a lighter side, in 1895, Cristóbal Balenciaga, a young designer for the Royal Family and the aristocracy, was born in Getaria. Following the Spanish Civil War, he moved to Paris, becoming one of the most famous designers in history. In 2011, a museum was inaugurated with his works, becoming one of the main attractions of Getaria.

Getaria is a picturesque harbour developed by the coast with steep and sloping streets. The old town of medieval streets sits on a rocky promontory that connects the city center with Mount San Antón. The ancient walls that have protected the city since 1209 are still standing in certain sections.

The first sight you will notice on your way into town is the Town Hall, located on the highway, at the beginning of Calle Mayor. Beside it you will find the old Casa Consistorial in sandstone with the shield of Getaria. In the road there is also the Monument to Juan Sebastián Elcano (1924), a work of architects Aguirre and Azpiroz and sculptor Victorio Macho, who is immortalised as a valiant seafarer with navigational instruments celebrating his winged victory. In the port area, you’ll also find the Aldamar Tower known as “The Watchtower”, built with masonry walls.

You can access the village through Mayor or Nagusia street or through San Roque in the heart of the village. At the end of calle Mayor, you will find the Parish Church of San Salvador, whose building dates back to the 15th and 16th centuries with additions through the years (like the bell case and the main entrance). It is an atypical building with an uneven topography and certain parts more elevated than others, giving it a peculiar look. It was here that the Boards of Guipúzcoa met to form the province and in 1794 decided to surrender the occupied Guipúzcoa to the French army during the War of Convention.

Through the port you can find a fortified gate called Katrapona. Here you can find another sculpture of Sebastián Elcano, a work of marble by Ricardo Bellver, overlooking the harbour from Katrapona square.

There are a number of gothic houses to see in Getaria; among them is the Zarauz Tower House, in ruins, standing as an important archeological site. Another interesting home is the Ochoa Ibáñez de Olano, strategically located next to the San Salvador church and the port with history dating back to the first half of the 15th century. Besides monumental buildings, you can also see many picturesque fishermen houses in Getaria that are narrow, white, and have colourful wooden balconies.

From the harbour you can reach the top of Mount San Antón, from where you can catch amazing views of the coast from Zarautz to Zumaia.

Across the road at the top of the town, you can find the Park and Aldamar Palace, which was the residence of the marquis of Casa Torre. Attached to this is a modern building that houses the Cristóbal Balenciaga Museum. This museum, which was installed at his birthplace, contains an important collection by the designer as well as some audiovisual files that give insight into the life and work of a key figure in the history of Spanish fashion.